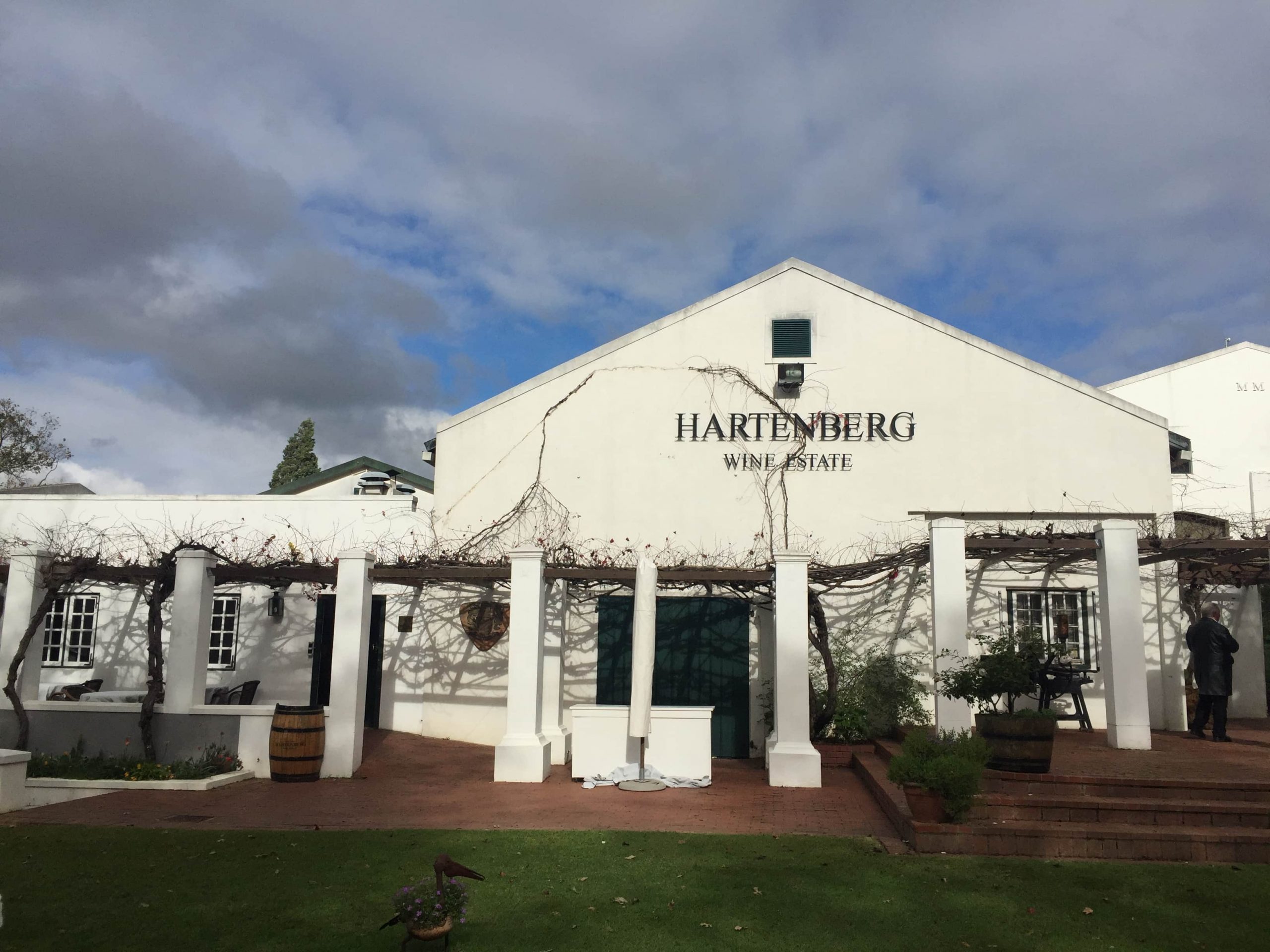 Hearty Food and Wine Brought by the Stork at Hartenberg

I have greatly enjoyed Hartenberg wines at successive Stellenbosch Wine Festivals, the Shiraz & Charcuterie Festival and at a Steele Wines Trade Show but I have never visited the estate itself for tasting. It has been a wait of 2 years so I was pleased again to be in the Bottleray Road area, North-West of Stellenbosch. My plan was to visit Hazendal and Fort Simon before going to Hartenberg for lunch and wine tasting. At last! 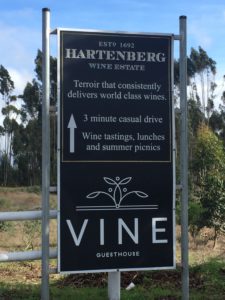 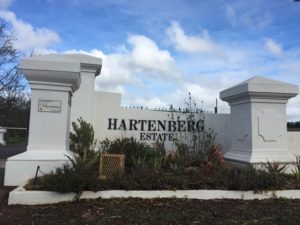 I nearly missed the entrance in my excitement before heading up the paved road through winter vines with detailed signs for each block. A low stone wall gave clue to the free draining soils on the North, West and East facing slopes of the Bottleray Hills that bring either morning or afternoon sun to the varietals. I parked above the Tasting, Restaurant and Cellar historic buildings with their quintessential white washed walls and heritage green painted windows. 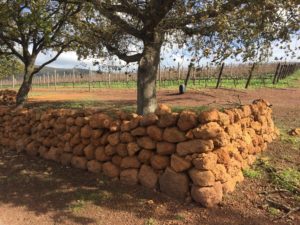 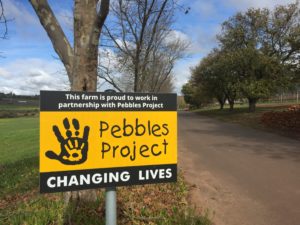 The walk to the Tasting Room is past a slave bell and down a flight of steps. Slave bells remain on many of the Cape’s wine estates and, as I paused to look, I was unsure of the ‘monument’. Slave bells were brought from Europe to regulate and control the routine of slaves for 180 years until slavery was abolished in the Cape 180 years ago. There is a fine balance between retaining the history of a nation and modern day diversity, inclusiveness and sensitivity. Witness, for example, the name changes of countries, regions and streets; removal of the Cecil Rhodes Memorial in Cape Town following pressure from the #rhodesmustfall campaign born out of the 2015 #feesmustfall movement; or even last week’s decision by Nike to withdraw the special 4th July edition of the Max 1 trainer that featured the Betsy Ross flag. The two needs do not always sit together in balance -especially when symbols can be hijacked by others for other needs long after their original purpose – and so I make a mental note to return to the Iziko Slave Lodge Museum in Cape Town. 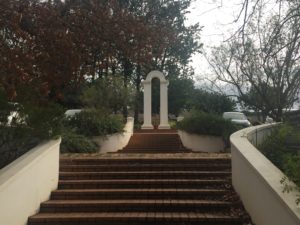 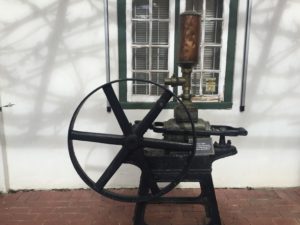 I was reminded of the history of winemaking at Hartenberg by a 1920 piston wine pump as I make my way for tasting. The estate dates back to 1692 when settler friends Cunraad Boin and Christoffel Esterhuizzen were given permission to farm 20 hectares of land. They cleared it to plant 2,000 vines (I wonder what cultivar?). Christoffel was granted the title deed for ‘Het Hartenberg’ twelve years later, in 1704, by Governor Willem Adriaan van der Stel. The property was planted with 10,000 vines by 1718 to produce 4 leggers of wine. A legger is an Old Dutch unit of liquid capacity used by the East India Company, equivalent to around 575 litres in today’s measure. Ownership of Hartenberg changed hands many times during the next 260 years, including by the Finlayson and the Gilbey families, until Ken Mackenzie purchased the estate in 1987, 2 years after launch of the Hartenberg flagship brand. Today, 85 hectares of the 187 hectare property are under vine, growing Sauvignon Blanc, Chardonnay, Riesling, Cabernet Sauvignon, Merlot and Shiraz from which the wines are made. Production is mostly red (80%) with Hartenberg famed for its Shiraz. 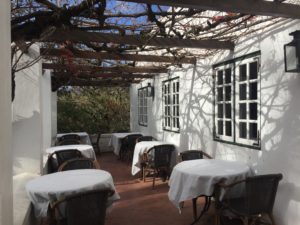 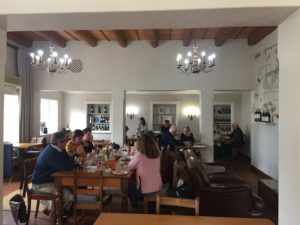 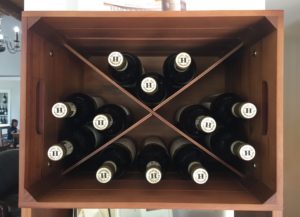 I chose to sit inside the Restaurant-come-Tasting Room rather than outside in the Courtyard Garden or small Tasting area beneath. The Tasting Room shares the same space as the Restaurant (closed on Mondays and Tuesdays) to make for a warm and cosy environment to relax in and to enjoy the wines, with its log fire, yellowwood tables, riempie chairs and terracotta tile floor. There were several winter specials on the menu to tempt. I ordered a very tasty and filling beef ‘Hartenburger’ that was excellent value for R120 and came with crisp potato wedges. There were 2 wine tasting options: the Premium Wine Tasting, R50 for 5 wines from the Premium Range; or the Super Premium Wine Tasting, R150 for a set tasting of 5 of older vintages of the best wines, including the Flagship Gravel Hill Shiraz. I opted for the former. Roderick was my attentive and very knowledgeable host who, seeing my obvious interest in the wines, generously allowed me to taste from both ranges. 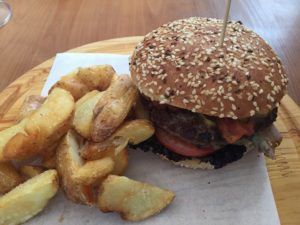 I enjoyed the white wines in 2 paired flights to compare. First, were the dry and off-dry Riesling. Both wines were a similar shiny pale straw colour in appearance and contained 13% alcohol. The dry wine showed typical Riesling diesel notes balanced with lemon/lime citrus, delicate white honey and floral aromas. These followed through for a fresh, green, acidic palate with a medium finish. The off-dry wine, picked later and with longer skin contact for a more concentrated, acidic must, offered like lemon/lime notes but sweeter and with less pronounced diesel on the nose. The body was noticeably fuller on the palate with a greater intensity of flavour than the dry wine, with the extra sugar (20 gram/litre compared to 5 gram/litre residual sugar) deftly balanced by the higher acidity to maintain freshness. 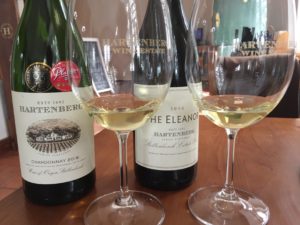 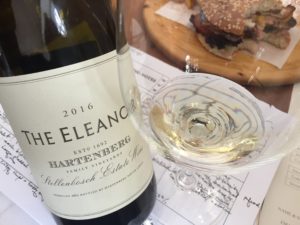 Second, was Chardonnay from the two different ranges. They were of like pale-medium straw colour and both barrel fermented and matured. The Estate wine, blended from 4 blocks of vines, was shy on the nose with aromas of lemon, lime, yellow apple and buttery vanilla. The smooth mouthfeel and light style made for a Chardonnay with a delicate elegance albeit limited complexity. Unsurprisingly the Super Premium Eleanor at nearly 3 times the price, made from a single block and named after matriarch Eleanor Finlayson, showed a greater intensity and complexity on both nose and palate. The wine was richer and weightier with much better length, aided by longer ageing in a smaller proportion of new French oak (13 months in 25% new/75% old oak compared with 11 months in 34% new/66% old oak). I preferred the Eleanor. 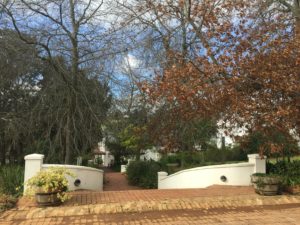 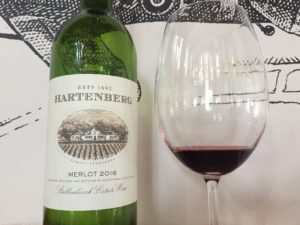 It was soon time to enjoy the red wines on which Hartenberg’s reputation is built. I started with two well made Estate wines of 2016 vintage, a Merlot and a Cabernet Sauvignon. The wines were distinct and characteristic of the cultivar. I liked the Merlot most for its vibrant red cherry and red plum fruited nose, complemented by sweet spice and cigar, that well followed through to give a good intensity of flavour and classic silky Merlot tannins. 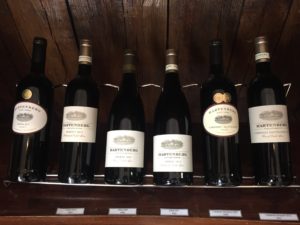 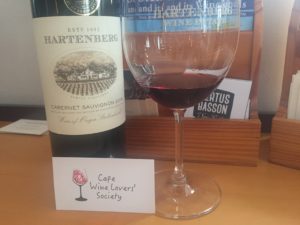 The Cabernet Sauvignon substituted spicy sweetness for more herbal, minty flavours, red fruits for fresh dark fruits – blackcurrant, blackberry and mulberry – and tannic silkiness for cleaner, textured yet angular and youthful structure in which the fruits did not balance the tannins as well as for the Merlot. 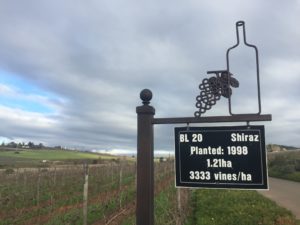 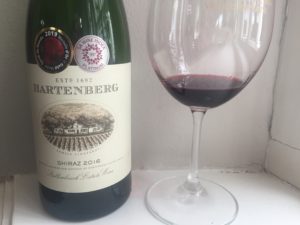 I sampled the Estate Shiraz beside the Stork Shiraz which, like the Chardonnay had a three-fold price difference. The Estate wine, from grapes grown on rocky sandstone soils, was a classic, lighter styled Shiraz with medium purple colour, fresh cherry, plum and mulberry fruits, a tinge of greenness and white peppercorn on the nose together with a delicate and balanced palate. 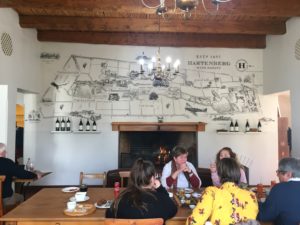 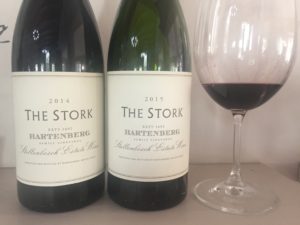 The Stork, which I had previously tasted elsewhere, was a step up in all wine criteria. Named after WWII fighter pilot Ken ‘Stork’ Mackenzie, so-called because of his long thin spindly legs, the wine was deeper and more intense in appearance. As fruity as the Estate, the wine was more vibrant, less green in character and with a leathery smokiness to the darker fruits of black cherry, dark plum and cassis with their cinnamon and pepper spice aromas. Slower ripening grapes from the single vineyard on cooling clay soils meant that the latest of harvests brought a rich, ripe fruitiness of flavour that superbly balanced tannic grip and structure on the palate. 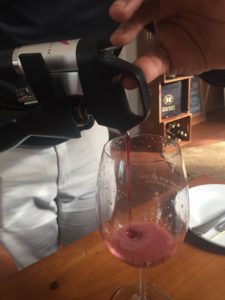 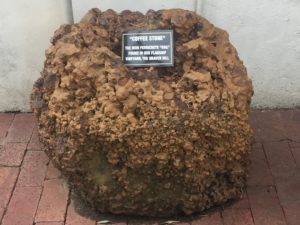 The Stork was my favourite wine until Roderick persuaded me to end with a tasting of the flagship Gravel Hill Shiraz, double the price of The Stork at a dizzying R1300 per bottle. I needed little persuading as he poured me a glass using a Coravin to maintain wine quality once opened. I had a new favourite wine. The wine, made from grapes from the small and unusual ‘gravel hill’, was first made in 1978. It develops very slowly and is labelled only after 5 years, this being of 2006 vintage. The unique geology rests on concentrated iron laterite ‘koffie-klip’ stone underlain by fine, deep clay. The combination gives water retention in the wet winter whilst just enough of a reservoir for summer moisture to limit vine vigour. 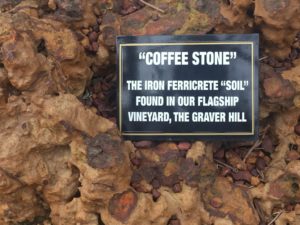 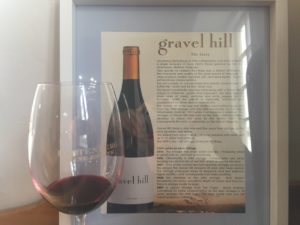 The Gravel Hill was the fullest bodied wine of the tasting with a rich and deeply intense nose of brooding blackcurrant, mulberry, bramble, ripe plum and white peppercorn. The wine, like all classics of supreme quality, had a freshness that belied its age. Power, focus and concentration were the hallmarks of the palate that was smooth, intense and perfectly balanced. Intriguingly, and testament to its quality, I could drink this wine alone as much as with food. 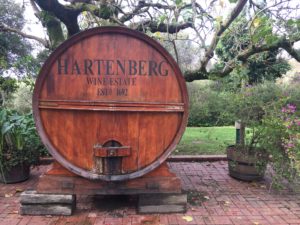 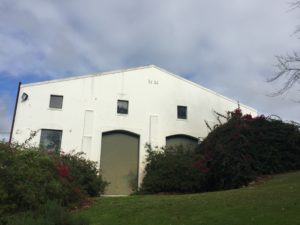 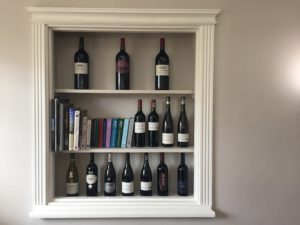 Hartenberg was well worth the wait, as I had much expected. The wines were all extremely well made, with good cultivar definition, and priced at the right level for their quality. I liked the wide price range (from R95 for the entry Alchemy Range, which I did not taste, to a stratospheric R1300 for the Gravel Hill) that meets those of every budget. The experience was good too with pleasant setting where it was easy to enjoy simple home-made food whilst sampling the wine. I could easily have chosen any item off the lunch menu. Sadly, I did not think of visiting the underground cellar, the largest privately owned of its kind in South Africa, but that just gives me an excuse to return. This I shall. I recommend that you also do so. Oh, and bring a friend or two for lunch at the same time. 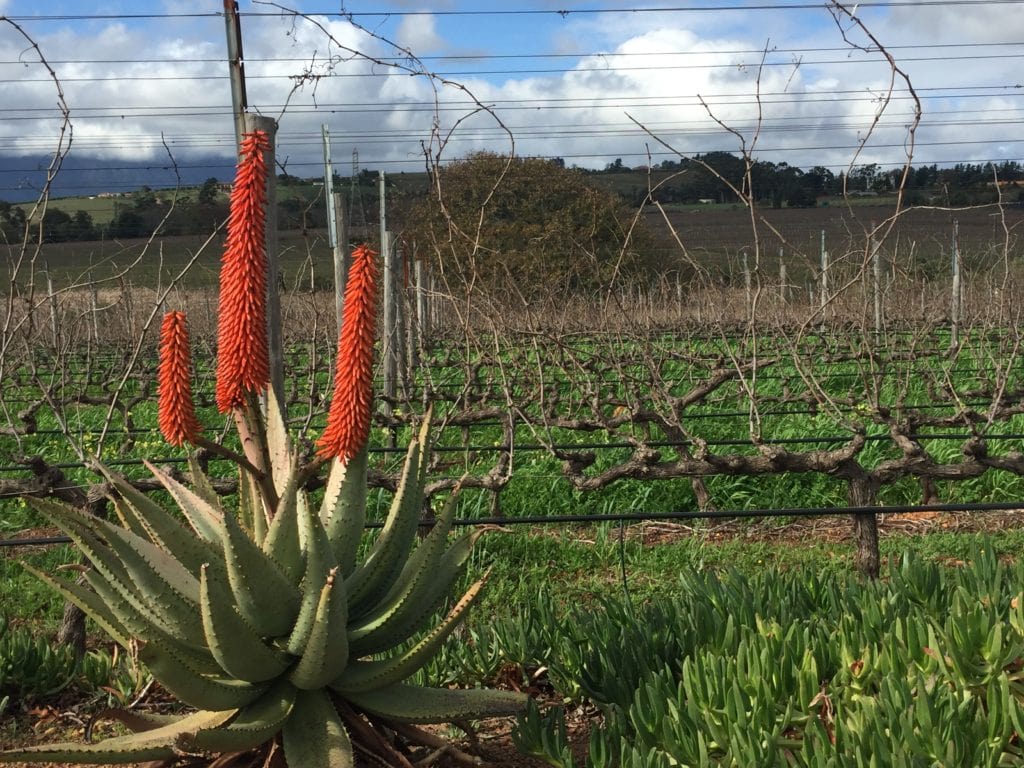