Home/Experience 5.0/Aged Wines – to Decant or not to Decant? 1998 Goede Hoop Cabernet Sauvignon 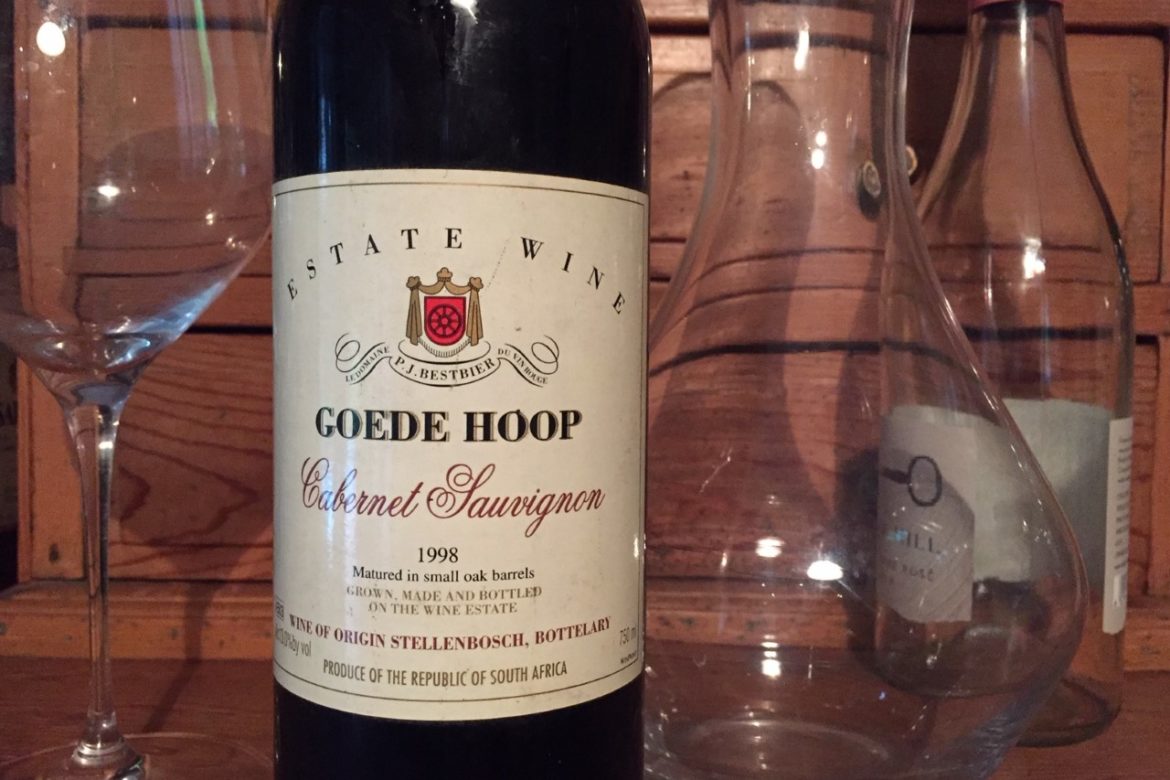 I do not have many aged wines here in South Africa. I had to start my wine collection all over again having arrived from the UK in 2010 and unable to collect wine until I bought my house in Cape Town in 2013. To add to that, it is far more common to age wine in my native England than in South Africa, where wines are produced and sold for early drinking (and cash-flow) rather than cellaring them at home until fully mature. It is rare to be able to buy a wine more than 5 to 7 years old. Compare that with the fact that a quality Cabernet Sauvignon might take 15 years to reach its optimal potential.

Thus, I was thrilled to be able to share my tasting of a 1998 Cabernet Sauvignon from Goede Hoop during today’s ‘Taste Live with Dr Peter’. This is my daily 6pm (SA time) video tasting on the Cape Wine Lovers’ Society Face Book group that I started before lockdown. It is a means to bring wine tasting to many at a time when visiting the wines estates, let alone purchasing alcohol in stores and online, is temporarily forbidden in order to prevent spread of the Covid-19 virus. The daily tastings offer an exciting and new way to promote the South African wine industry and its estates. I am proud to have been one of the very first to do so.

I visited Goede Hoop in January 2018. Johan Bestbier gave me an unforgettable experience. I rated both the wines and the tasting as a rare double Dr Peter scores of 5/5. The estate lies in the Bottleray wine region to the North-West of Stellenbosch. It is an area known for its red wines due to its North-facing slopes, with their cooling False Bay and Atlantic breezes, that are 150 to 450 metres above sea level. The red and yellow brown, acidic granitic soils are well drained but nonetheless offer good water retention ability. The Bestbier family bought the estate in 1928. Three generations have since made wine, using techniques and infrastructure that have little changed since 1935, from 71 hectares of vines. Only the best 5% to 10% of grapes are made into Goede Hoop wine, with the remainder sold to the local bulk wine producers.

Wine does not remain the same when bottled. Gradual changes occur due to slow oxidation. These affect all the wine’s properties and character. Over time, white wines gain colour as they change from lemon to gold to amber and even brown. They become viscous, sometimes oily, in texture. Red wines on the other hand become paler. Ruby and purple turns to a garnet or brick red and eventually tawny or even leather coloured. The rim at the edge of the glass looks paler when the glass is tilted as the wine shows a colour depth gradient from the centre to the outside. Red wines, especially, develop a bouquet that is formed on the nose from the tertiary aromas, those which develop in the bottle with age, that is distinct from the primary fruit and secondary winemaking aromas and flavours. The acids and alcohol combine to make new compounds, whilst others dissolve. As the fresh fruit flavours fade to those of dried and cooked fruits, those that previously have been hidden – leather, earth, mushroom, meat, forest floor and wet leaves – come forwards. This adds to the complexity of the wine which may, after long ageing, show very little remaining fruit aromas and flavours.

Meanwhile, the texture of red wines alters. They become smoother, rounder and gentler. This is because in young wines the phenolic compounds repel each other and therefore stay in suspension. As the wine ages, the compounds lose their charge and combine to form increasingly larger and heavier chains. The loss of surface area is what makes the wine feel softer in the mouth. Eventually, the compounds may become so large that they drop out of suspension altogether to form sediment. Acidity feels like it softens and falls away too. However, the amount of the acidity little changes; instead, the acids react with the alcohol in a process called esterisation.

You have most likely heard that aged red wines may need to be decanted. There are 2 reasons why this might improve the wine. First, to remove any sediment so that it stays in the bottle and not the glass. This is best done after the bottle has stood upright for 24 to 48 hours to let any sediment fully settle. The wine is gently poured into a decanter, traditionally with a candle or bright light source under or beside the neck to see when the sediment reaches the top and pouring can stop.

The second reason for decanting is more complex and often controversial. A wine that has been bottled for a long time needs time to ‘breathe’ and to ‘open up’ – just as you would after many years of ‘lockdown’. Two processes are at work here: evaporation and oxidation. Wines, especially those made using ‘reductive’ winemaking – where exposure to oxygen is limited – may show unwanted notes on opening. These can smell of rotten egg, or hydrogen sulphide, and caused by some yeasts or lack of oxygen. Decanting increases the surface area of the wine so that these unwanted aromas rapidly evaporate. This is a great tip if you open a faulty or spoiled wine. Decant it and it may just improve enough to drink. Last, decanting oxidizes the wine as it is exposed to the air. Whilst this can allow the aromas to ‘open up’ and thus improve the tasting experience, it can also have a detrimental effect. Delicate, faded, fragile aromas can be lost. It is a fine balance.

The length of time and decanter shape to aerate a wine depends on the wine age. Younger wines, between 3 or 5 to 10 years’ old, need longer. They are more vigorous and benefit from up to an hour.  Aged wines of 10 to 15 years or more need only half an hour as they are more fragile. These wines do best in a decanter with a broad base, such as a traditional ship’s decanter. On the other hand, a narrow-based and more bulbous shaped decanter suits younger wines.

I decided therefore, as the opportunity to taste a wine over 20 years old – 22 years to be precise – does not come around very often, to compare decanted with non-decanted. I opened the 1998 Sauvignon Blanc 20 minutes before I started my ‘Taste Live with Dr Peter’ video started. I decanted half into a bulb-shaped decanter (not the ideal shape) and left half in the bottle simply to ‘breathe’. The results of the side-by-side tasting surprised. The appearance of the wine in both glasses gave clue to an obviously aged wine due to the garnet colour and clear colour fading at the rim. From there, the differences began. The decanted wine was earthy and savoury on the nose, showing little more than a hint of faded fruits. The bouquet was limited in intensity and almost totally tertiary in character. I could not detect many oak-associated notes, if any. In contrast, the wine from the bottle showed greater intensity of bouqet and one different in character. There were fruit aromas albeit with far more red than dark fruits that I suspected the freshly bottled wine possessed. They balanced well the underlying tertiary bouquet with similar lack of secondary aromas.

These bouqet differences followed through to the palate. The earthiness and relative lack of intensity on the nose was apparent on the palate of the decanted wine. The wine was silkily smooth, far more so than any South African Cabernet Sauvignon I have tasted. The faded fruits showed too as if there were hints only of their former fullness. The balance remained good and the finish modest. I much preferred the wine that had simple been allowed gently to ‘breathe’. The light simple fruit flavours were not overpowered by the tertiary ones that had developed in the bottle. The balance was still good, with the modest 13.0% alcohol kept in check by the seemingly fading acidity. The feel of the tannin was similar, with a semi-gloss silkiness that filled every corner of my mouth with delight. It seemed as if the wine could have been beyond its best and the fine bouqet was too week for decanting and exposure to the air.

It was interesting to read after in some of my old Platter’s Wine Guides that the 1998 vintage was hot and dry and with ‘frost during October’. How climate change affects. The entry also said that 1998 was ‘undoubtedly a red wine year’ and ‘offering excellent maturation potential’. Two thousand cases of the 1998 Cabernet Sauvignon were made, using new oak, and just the second Cabernet vintage from Goede Hoop. ‘Thoughtfully made’, I am sure it was.

I learned a great deal from this tasting and so it is good to share. I did not expect such a difference between decanted and non-decanted wine. I am pleased that I only decanted half the bottle. Not only did it give me the chance to compare and learn but also it meant that I could savour the better half from the bottle. Now that was an opportunity worth waiting 22 years for!