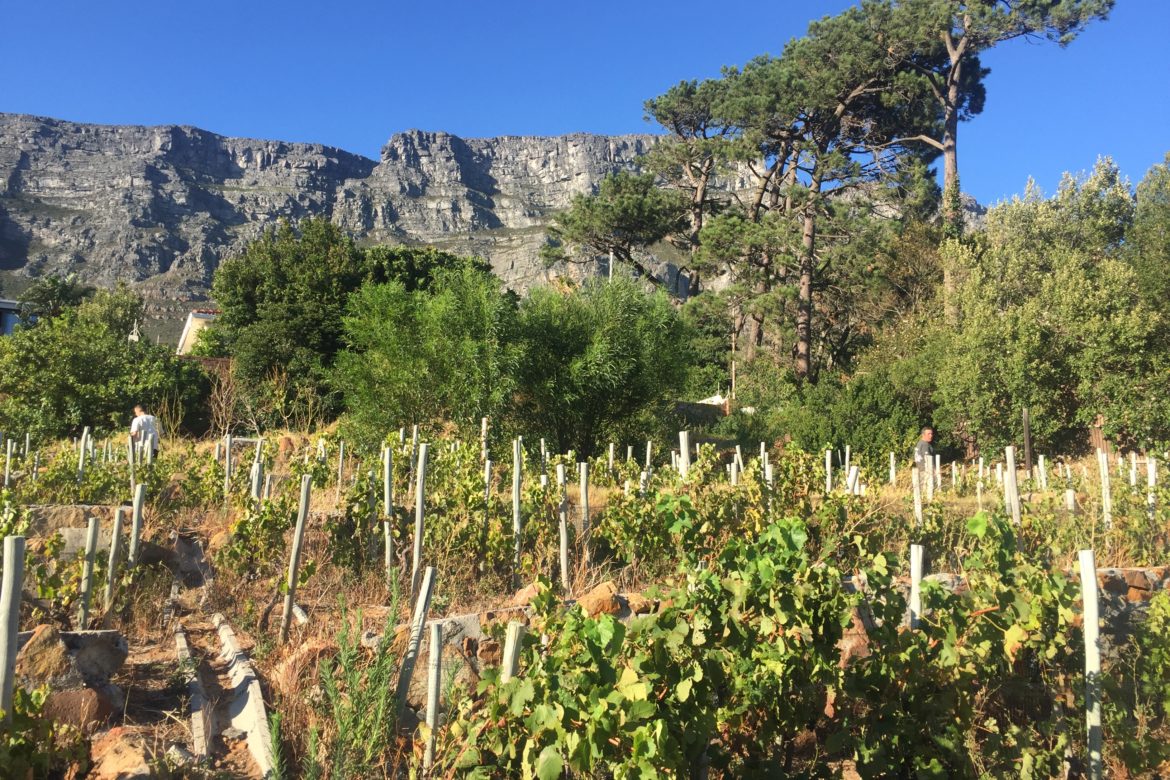 The forecast for Cape Town today was a scorching 35ºC. Thus, it was not the best day for my first wine harvest. I have stomped on vines at Delheim wine estate. I have studied making wine at the excellent Small-Scale Winemaking ‘Garagiste’ Course with Professor Wessel du Toit aka ‘The Wine Prof’ at Stellenbosch University. I have done countless courses of study with the Cape Wine Academy (CWA) and the Wine & Spirits Education Trust (WSET). I have drunk thousands of bottles of wine. I have never though picked wine grapes. The opportunity was not to be missed as Jean Vincent Ridon – bon viveur, viticulturalist, winemaker, wine judge and sommelier of note – invited help with the 2020 harvest. Never one to pass on a good experience, I readily volunteered and so made my way through rush hour traffic to the Clos d’Oranje in Oranjezicht, Cape Town. 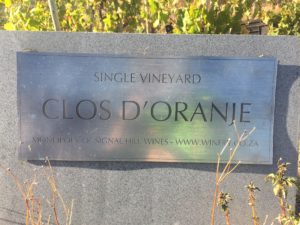 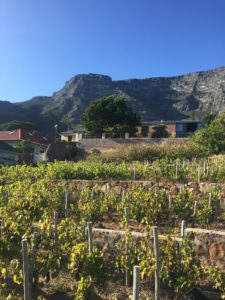 I knew I was close and had arrived at the correct location when, at just after 8.00 am, I heard French voices. I felt as if I should have brought fresh croissants or a warm baguette at least. I was welcomed, holding the obligatory Felco secateurs in my hand, by ‘JV’ as he prefers to be called. Very soon after set to work. His son and a chef friend from Sancerre, now resident in South Africa, had already started. We were later joined by the Signal Hill Wines office staff – the label under which the harvested grapes are bottled – sommelier, wine enthusiast and other friends. 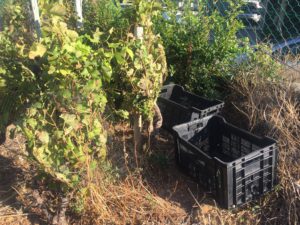 Clos d’Oranje (the term ‘clos’ is common in Burgundy, France and means ‘walled’ or ‘enclosed’) is a mere 0.14 hectares in size which equivalent to a modest housing plot. JV conjured up the idea of a city vineyard (South Africa’s and most likely Africa’s only city vineyard) after making wine from the Clos Montmartre in Paris in 2001. He told me that he sought a plot on his return to Cape Town after. A partnership followed with the wealthy Andrag family who owned much of the prime land in Oranzejicht in and around Lincoln Road. This was successively sold off for housing save for the Clos d’Oranje plot that was kept for the grandfather and keen gardener of the family. It thus has a historic foundation since wine was first made in the adjacent suburb of Gardens, Cape Town in 1659. 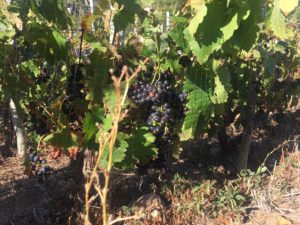 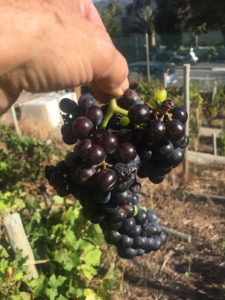 JV explained how he planted the Syrah vines in 2001 and has made at least 10 vintages from Clos d’Oranje. The vines are unirrigated and planted at a high density 1.0 metres x 1.2 metres spacing to make for about 1,600 vines in total. Total plot size is about a third and half the size of those at Ambeloui (MCC) and Kalk Bay (Cabernet Franc) vineyards, respectively. The vines are nearly all ungrafted as, JV went on to tell, he did not expect to be making wine on the property for more than 10 years. He has seen the Phylloxera louse in the rough sandstone and granite soils. They have fortunately had little adverse effect. Far greater loss stems from hungry starlings and other birds in the neighbourhood hence the bottom half of the vines have been netted to preserve the harvest. I have surprisingly seen very little use of netting in South Africa. It is used at Abingdon Wines in Kwa-Zulu Natal for hail protection and to counter monkeys. Coincidentally, I saw nets at Eagles’ Nest in Constantia just 2 days ago. 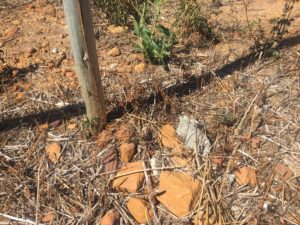 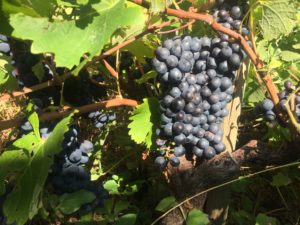 The combination of dense planting and netted vines did not make for an easy harvesting introduction. With temperatures rising, I realised how back-breaking wine harvesting is as one stoops and bends to find the bunches to cut. These varied in size from that of a naartjie to the size of my foot. Many were dried out, especially on the sunny side of rows and at row end. It was easy to see all the CWA/WSET learning theory on viticulture and canopy management put into practice. Feeling through the orange leaves of the goblet-trained ‘bush’ vines tied loosely to individual poles and it was easy to miss the occasional bunch. It was also easy to nick a finger or two with my sharp secateurs. 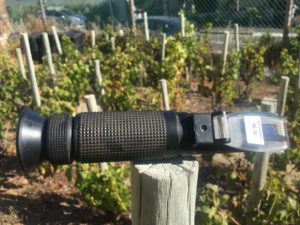 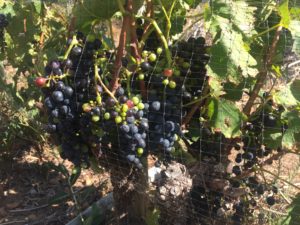 I asked JV, “Why pick today and not yesterday or tomorrow?”. The answer he gave was sugar content. He showed me how to squeeze the juice from a grape onto the plate of a refractometer. Like a small hand-held telescope, I could see the reading of 21 Balling that equated to 210 grams/litre sugar for a potential alcohol of 12.0%. The bunches were collected into lug boxes that held about 15-20 kilograms of grapes. This was heavy enough for awkward carrying between the narrow rows. The Old Norse Swedish/Norwegian origin of the word ‘lugga/lugge’ being related to a slug that is ‘lazy, slow-moving’ made perfect sense. 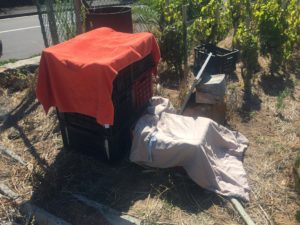 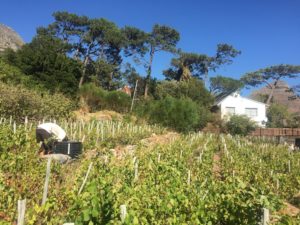 More than halfway through and JV opened a bottle of his unlabelled 2009 (or was it 2007?) MCC made with Chardonnay and Pinot Noir from Robertson and Somerset West, respectively. He showed us how to disgorge by hand by deftly whipping off the crown cork whilst the bottle was upside down. All the yeast sediment as a result was forced out of the bottle under its own pressure without too much being lost as he returned the bottle upright. Dehydrated as I was, the warm, nutty, fruity wine was nonetheless refreshing with the benefit of 10 years on the lees. 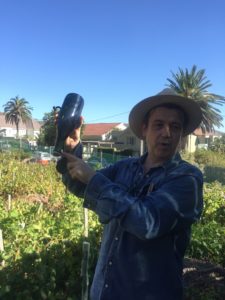 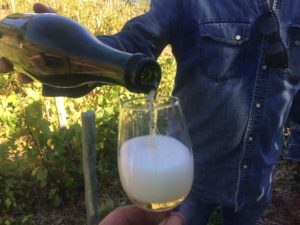 I returned with my colleagues to pick the remaining vines. In doing so, I moved from the small vines where I started to larger plants. JV explained that these were of different clones: smaller un-grafted experimental plants and the more vigorous R-99 clone. I learned that less lugging was needed if I picked the rows either side of me rather than from one row at a time. Fortunately, I was not being paid at a ‘piece rate’ and it was easy to see the amount of sheer, physical hard work involved in those oft-advertised, romantic student summer experience holidays in the wine regions of France. 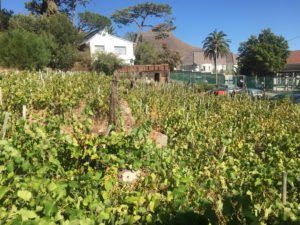 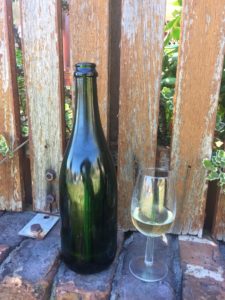 We finished by 11.30 am. We filled around 22 lug boxes that will make about 2 barrels of wine. The 2020 harvest was smaller than that of 2019. JV told me that the bunches will be taken to the Winery of Good Hope. They will be cooled overnight before a decision tomorrow whether to vinify using whole bunch or de-stemmed grapes. The stems tasted ripe (I chewed on one to taste too) so he might decide not to de-stem. 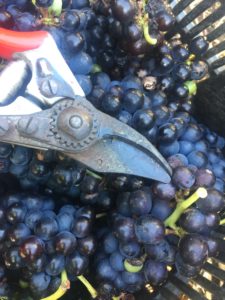 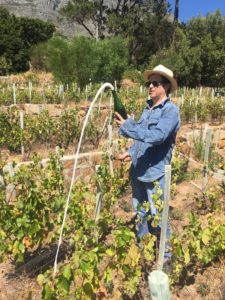 Job done. I left with a feeling of satisfaction to have been a part of the boutique Signal Hill 2020 Syrah vintage. Today was a classic case of ‘learning by doing’. Clos d’Oranje has a beautiful setting beneath the majestic North face of Table Mountain even though tightly surrounded by houses. I felt privileged to be a part of the wine journey and will certainly view hand-harvested wines with greater respect and in a new light. The starlings which had circled above in the hot blue skies returned to chatter in the vineyard, to feast on any missed or discarded bunches. They will be there still in 2025 or beyond when I hope to be able to taste and drink the fruits of my labours this morning. 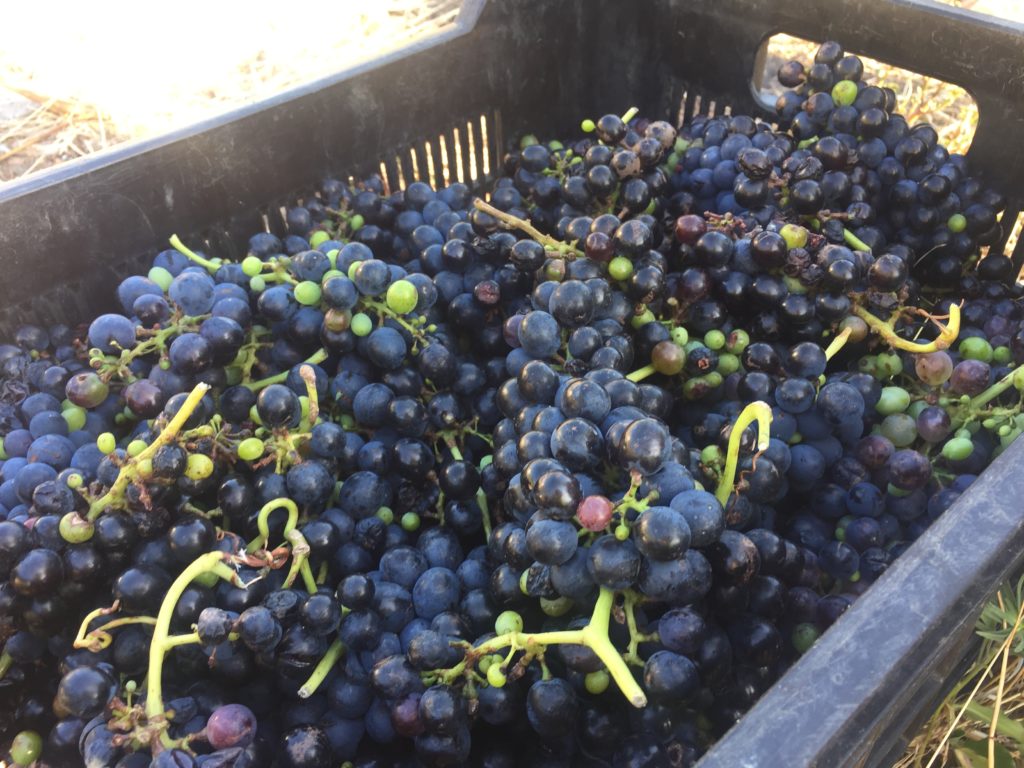 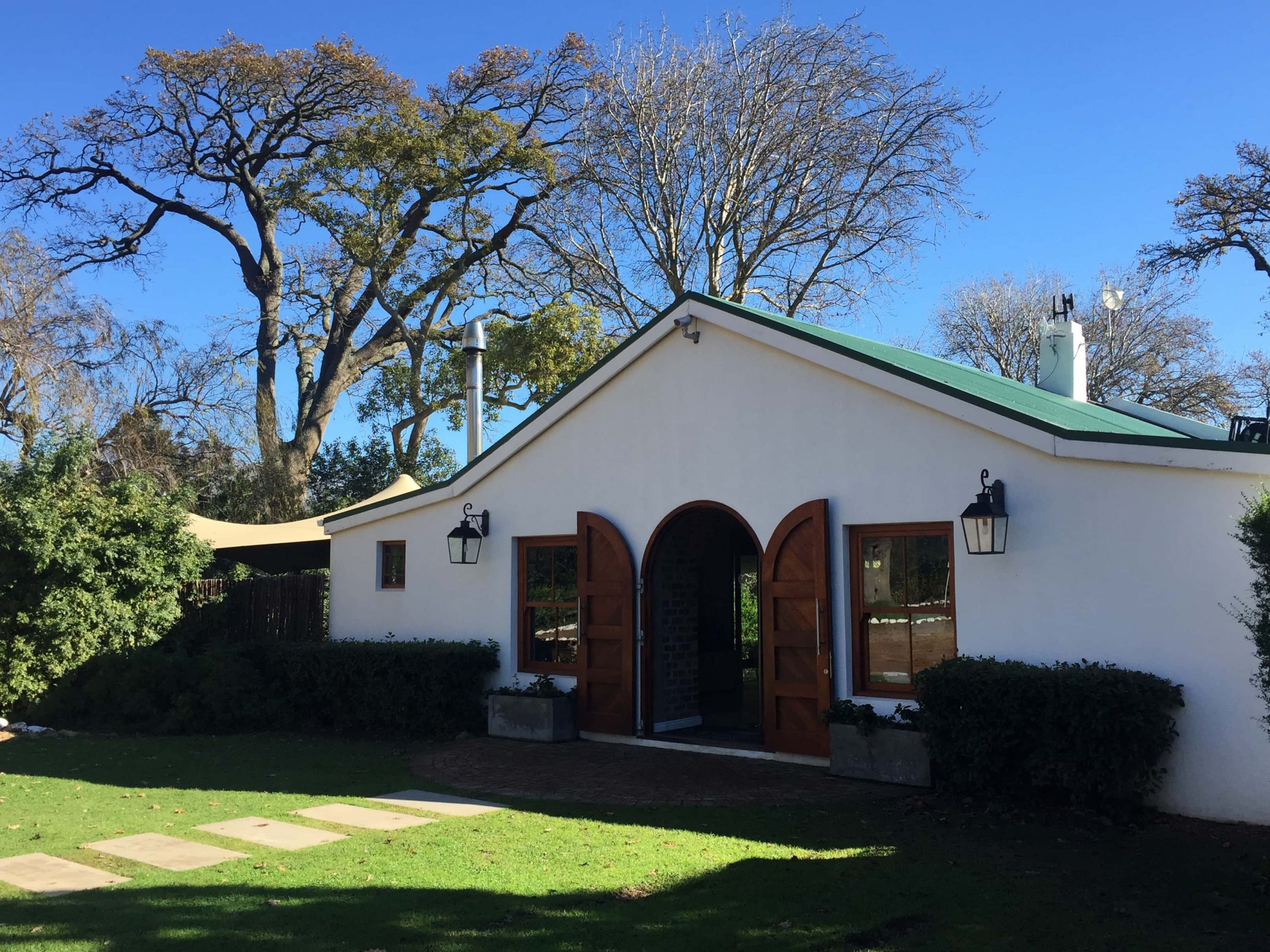 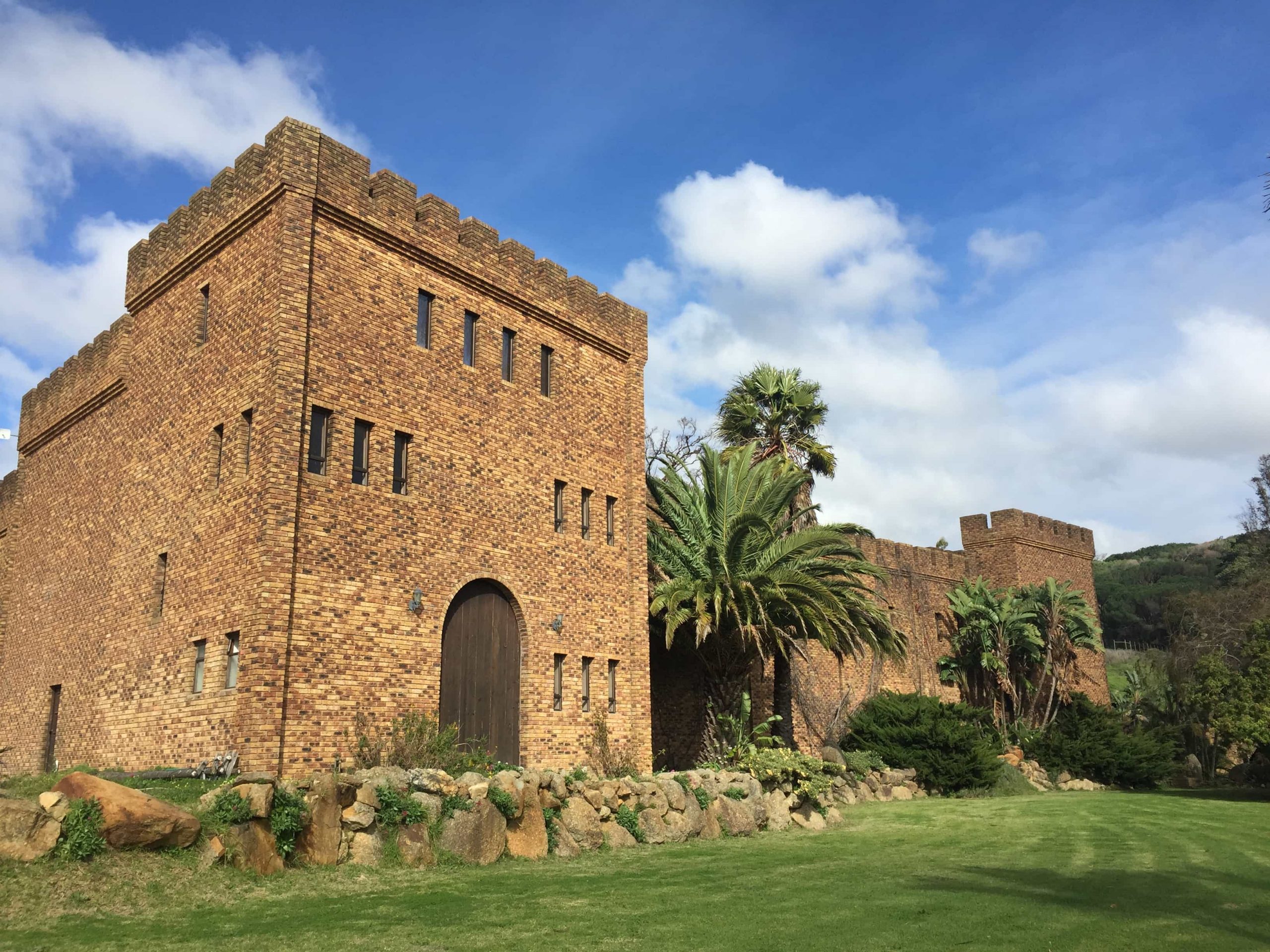