Home/Experience 4.5/God Bless Slaley and All who Drink with Her

God Bless Slaley and All who Drink with Her 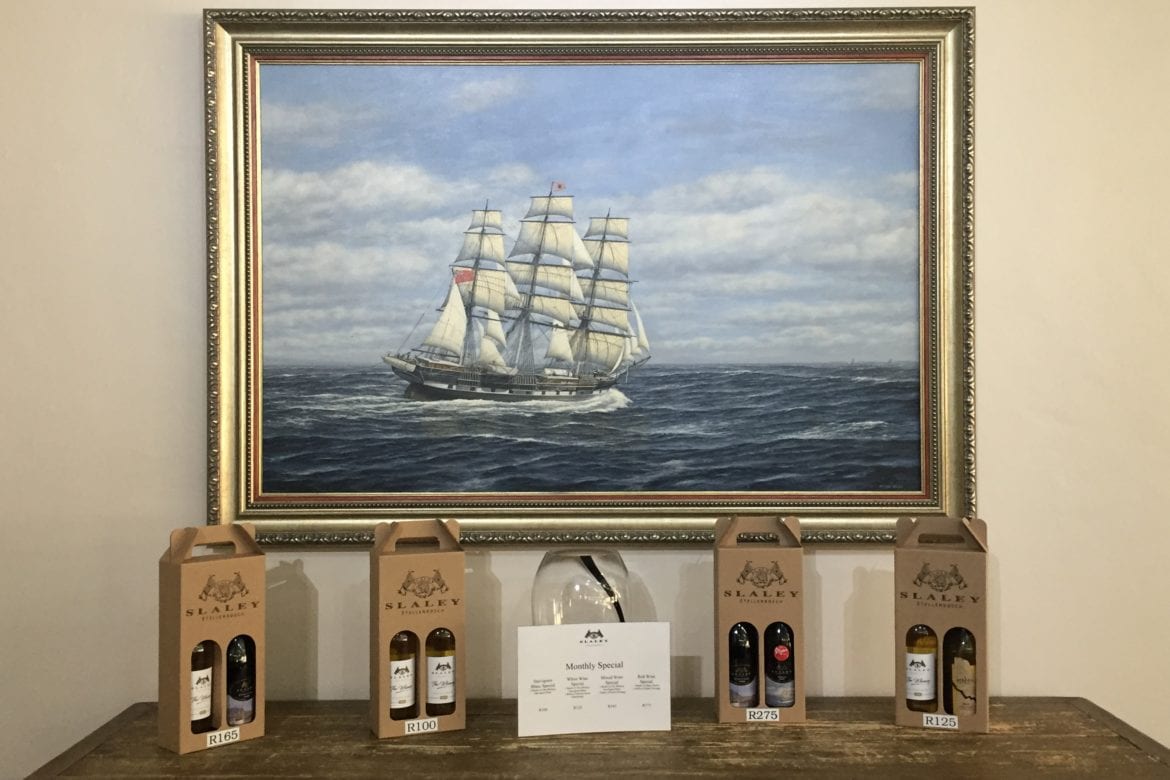 I have been before. I have been to Slaley before. Not to the wine estate though but to the village in Northumberland, North East England that lies South of the market town of Hexham and the magnificent Hadrian’s Wall that stretches for 120 kilometres across the entire country, built in AD122 by the Romans to keep the Empire intact from the Barbarians. Today, at Slaley wine estate, I was much closer to my adopted home in Cape Town. I have passed Slaley numerous times in recent years whilst travelling to and from Morgenhof during my Cape Wine Academy Certificate and Diploma studies but like Morgenhof, Villiera too, I never quite had the stamina to stop and taste their wine after a long day in the classroom. Moreover, Slaley was not only open on a wintry July afternoon, unlike some other nearby estates, but also conveniently en route for the start of my journey home back to Cape Town. 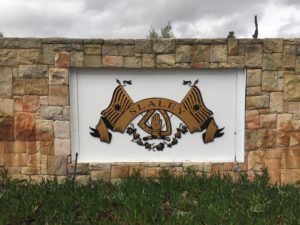 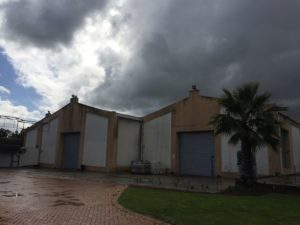 The entrance is off the R44 due North of Stellenbosch. The impressive stone walls bear a large family crest in gold that looks more American than the British heritage but has a row of vine leaves beneath the knight’s glove and shield. The road to the car park is lined with white roses, their late blooms windswept, and blue flowered rosemary bushes. Olive trees are on one side and vines the other. I parked to the side of the tan and white painted hangar-like Cellar that adjoins the main building that houses the Bistro restaurant and Tasting Room. It was an unexpected surprise to see the glorious ship painting, a tall ship in full sail, as I entered and headed up the stairs to the large open restaurant. The room contained 12 more large ship paintings. It was my effusive tasting host and family member Kim who joined me to explain the background. 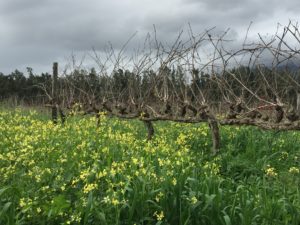 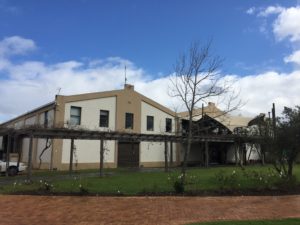 The Slaley name stems from Slaley Hall that was built in Northern England in 1911 by the Hunting family, who had been successful cargo operators for more than 2 generations, notably Charles Hunting who was an innovator and entrepreneur with shipping offices in Newcastle. Yes later, in 1952, 22 year old British Army Engineer Martin Hunting left his posting in Kenya for the Cape. He graduated cum laude in viticulture from Elsenberg College and bought the 187 hectare farm adjacent Simonsig in 1957. He renamed the property that lies on the Western slopes of the Simonsberg in honour of his family heritage. Hence, the paintings – and wine labels – have been commissioned over the years to commemorate the original business focus on shipping. 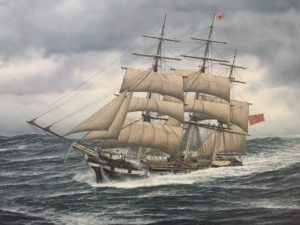 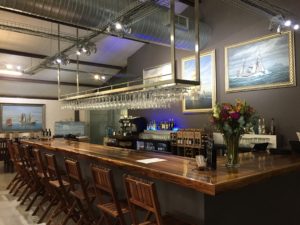 As Kim brought out 5 wines in the large open room with its magnificent views over the surrounding vineyards to where I was seated close to a heart-warming log fire, she put the history into personal perspective. It was her great, great grandfather who bought the farm for her grandfather. How I wish I had such a generous grandfather! The grape production was controlled by the KWV co-operative at the time, before the end of apartheid and before the SAWIS era. The farm was divided between 3 children with 3 cellars to overcome some of the original quota restrictions and so it was not until 1995 that the Cellar was built. Today, Slaley specialises in making quality red wines (90% of production) that in Old World styles that reflect the climatic conditions of their particular vintage. This includes the use of long fermentation periods at high temperatures, sheet filtration rather than cold stabilisation (to avoid stripping out floral and aromatic flavour), and classic French barrels. The red wines are therefore heavily tannic and hence aged for long periods before release. Thirty hectares of Sauvignon Blanc, Chardonnay, Cabernet Sauvignon, Merlot, Shiraz and Pinotage are grown on the varied soils. 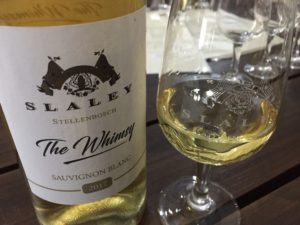 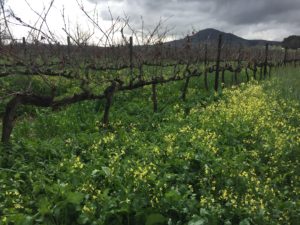 The first wine was The Whimsy Sauvignon Blanc from the Social Range. Deeper in colour and older than many a Sauvignon Blanc (2017 vintage), the wine showed a distinct style unlike most I have tasted. The aim, so explained Kim, was to produce a Sancerre rather than a New Zealand style of Sauvignon and this showed by the waxy, warm lemon and litchi aromas. The rich sweetness of the fruits hid the high acidity of the dry wine. 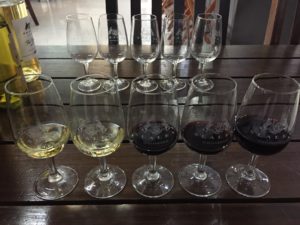 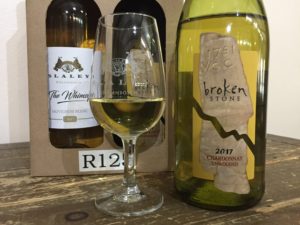 The next 2 wines were from the Broken Stone Range, so named after a large stone that was found whilst clearing vegetation close to the boundary after Kim’s father had bought Slaley. Three more were found on the farm and on adjacent properties over the years. The original stone was found to have the inscription ‘WCG 1751’ on it. It is believed that the ‘CG’ on these boundary stones stood for Christoffel Groenewald, the first owner of the farm, with the ‘W’ added later (it stands to one side of the central ‘CG’ lettering) to denote ‘Weduwee’ or widow. The first wine, an unwooded Chardonnay was similar in appearance to the Sauvignon Blanc with fruity and concentrated notes of pineapple, sweet and baked apple on the nose. Fermented dry to boost the alcohol level, the smooth, fruity palate showed weight and texture together with medium+ acidity. 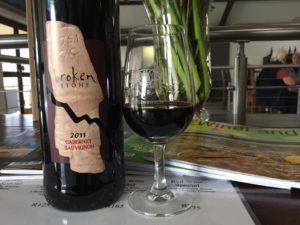 The second wine of the range and the first red wine was a Cabernet Sauvignon of 2011 vintage. The ruby coloured, full-bodied wine showed fading on the rim but little sign of discoloration. Smoky, rich, jammy dark fruits of plum, cherry, cassis and bramble together with those of spearmint and mint showed on nose. The palate was intense with a good fruit balance with smooth yet still grippy tannins. 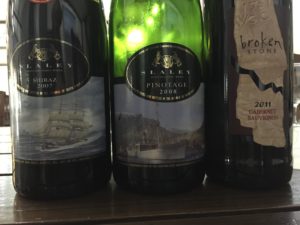 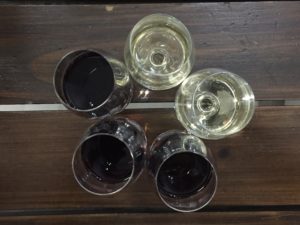 The plump Shiraz from the flagship Slaley Range was older still (2007) and my favourite wine of the tasting. Emblazoned with a cargo ship in full sail on the bottle label, the wine showed similar fruity richness to the Cabernet Sauvignon with aromas of cassis, plum, blackberry and warmer peppermint and white spices. Smoky flavours on the palate gave away the bottle age whilst the fruits showed freshness against the soft tannins. 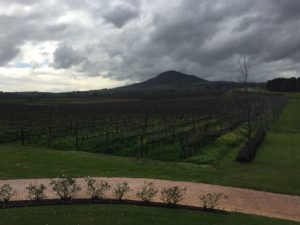 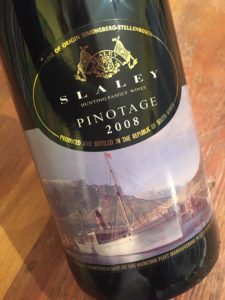 I ended the tasting with the Pinotage that I also rated highly. The wine was made from bush vines planted in 1955, making them the third oldest in South Africa, indeed in the world. The brooding wine was fruit driven with dark fruits – not as jammy or banana flavoured as many a younger Pinotage – with concentrated, weighty flavours of plum, prune, cassis, slight floral violets and savoury truffle. This was far from a classic modern styled Pinotage and better, in my opinion, for it. 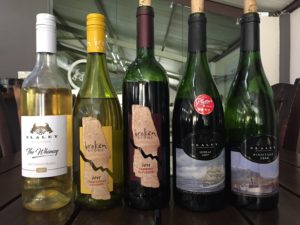 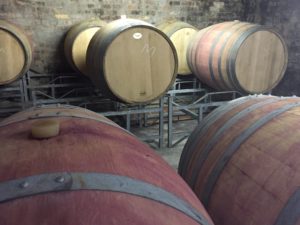 Slaley showed that it is possible to be different from the rest. The wines showed the same innovative spirit of the old shipping line and bucked the trend to produce some great wines that are made for ageing, a rare practice currently in South Africa. This allows wine to be made not only with tannic structure but with good acidity and plush fruits top balance. Slaley may not be the biggest name or the first Stellenbosch estate that comes to mind but I well recommend a visit to sample the wines. God Bless Slaley and all who drink with her …. 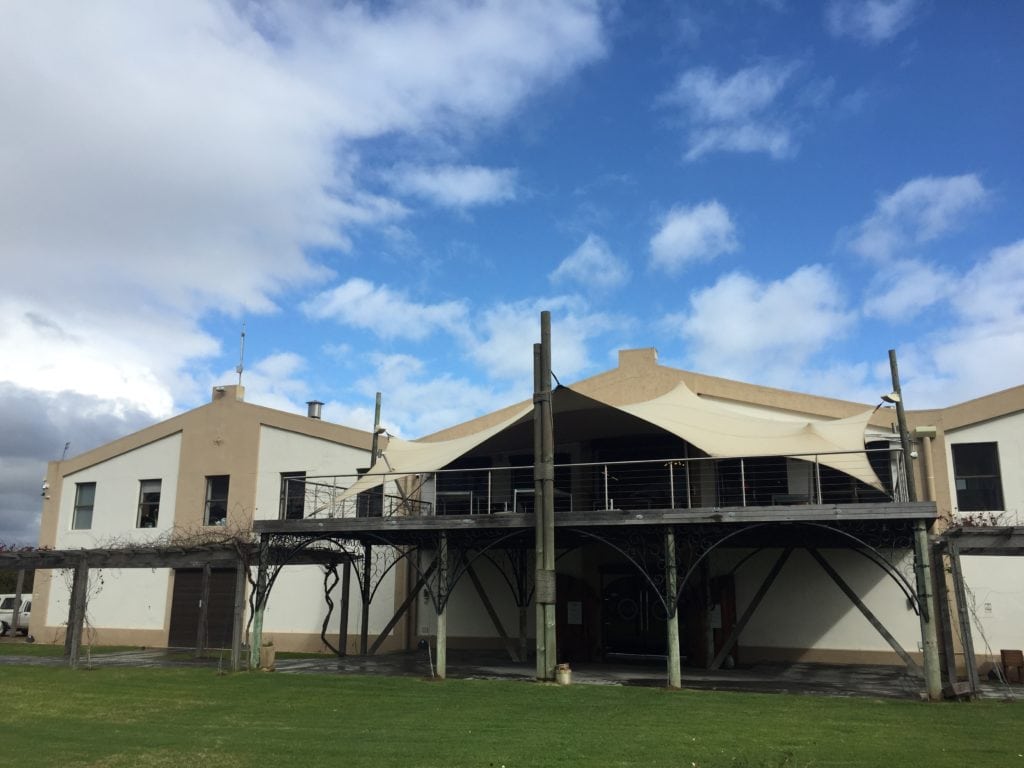