Home/Experience 3.5/Morgenhof in the Morning 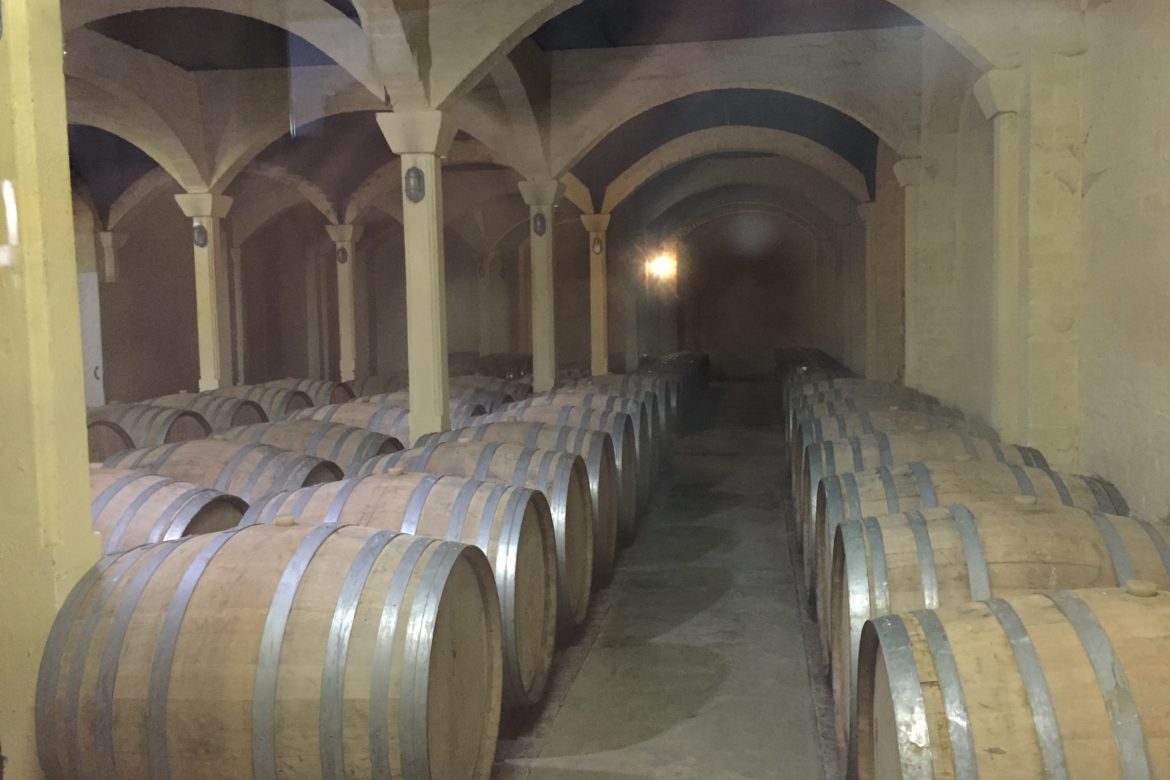 It was fitting that Morgenhof – translated from Afrikaans as the ‘morning yard’ or ‘morning garden’ – was my first tasting of my day out in Stellenbosch. The tasting was long overdue since I have visited Morgenhof over 30 times during the past 3 years for Cape Wine Academy studies, initially for the Wine Certificate Course and more recently for the Diploma in Wine Course. Somehow, at the end of lectures and tasting, I never had the impulse to stay longer to taste the Morgenhof wines. Today, I was able to make amends. 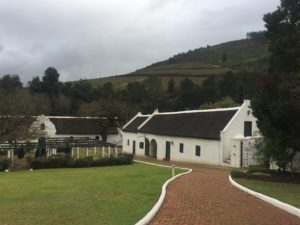 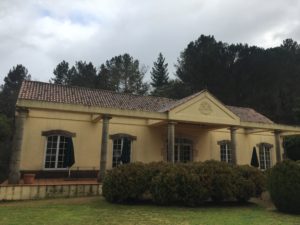 It being winter, and a very dark and rainy one at that, the tasting was not in the ‘Tastevin’ Centre with its impressive French styled tan and terracotta tiled building with ornamental garden in front, but in the Restaurant. There was welcome fire when I arrived but in a room set up for a large party and not at the little table up the stairs where I tasted. I could see one end of the large underground maturation cellar through the window by my table, that was built in 1995 to house 2,000 French oak barrels and which reaches out all the way to beneath the main Tasting Building. 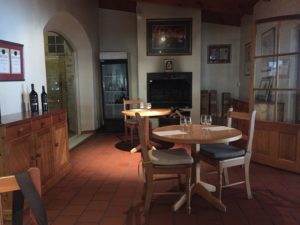 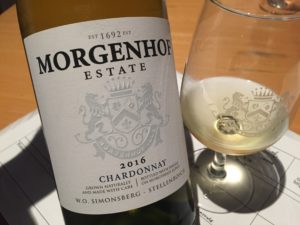 Rose hosted my tasting, with simple explanation, which was a very economic R35 for 5 wines. I started with a shiny, pale straw Chardonnay made from grapes grown on shale and clay soils that was lightly wooded for 9 months in 80% French/20% American oak. The wine was fresh on the nose with lemon, apple and modest vanilla notes. These followed through to light flavours on the palate that showed little malolactic fermentation for a clean mouthfeel and a decent acidity. This was a pleasant albeit undemanding and value for money wine. 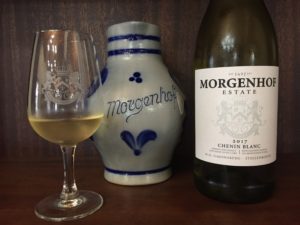 I rated the similarly oaked Chenin Blanc (6 months in old French barrels) the same. Like the Chardonnay, the wine was poured straight from the fridge and so very chilled – and slow to warm up to serving temperature in the wintry tasting room – which meant that it took time to show distinct Chenin light honey, guava, litchi and tropical fruit aromas and flavours. These were better on the palate than the nose. The wine showed good acidity and was longer at the finish than the Chardonnay. The intensity from 46-48 year old vines showed and the wine concentration was better for it. 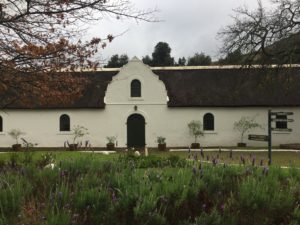 Morgenhof, like many a Stellenbosch wine estate, has a long history. The farm dates back to 1692 and to the French Huguenots. Dry farmed, there are 78 hectares of Chardonnay, Chenin Blanc, Cabernet Sauvignon, Cabernet Franc, Merlot and Malbec wines grown on varied granite-based soils at between 65 to 400 metres altitude on the 213 hectare property to produce mostly red wines (60% of production). All the wines show the Simonsberg-Stellenbosch Wine of Origin. The estate has been owned since 1993 by Anne Cointreau of the famous Cognac family (her grandfather founded Remy Martin Cognac) who bought Morgenhof when she moved to South Africa. 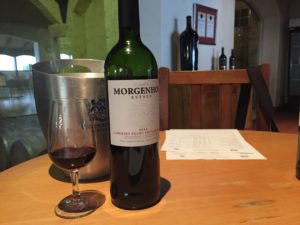 The Vintage Select Cabernet Franc was my first red wine of the tasting. It promised much from its lightly embossed label, the just full-bodied, ruby red appearance, and raspberry, red plum, cassis, tomato leaf and cedar aromas on the nose. Made in lighter, approachable style, using 18 months maturation in French oak barrels, the wine needed more weight and intensity. The fruit flavours fell away all too fast and the tannins were not strong enough to make up for the difference. I wondered after if the 2013 vintage, known for its large crop, moderate conditions, and lower alcohol wines, was already at or past its best although there was no colour graduation. 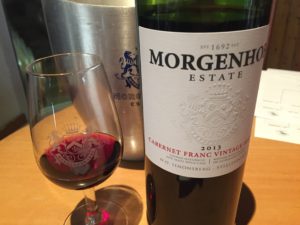 The Cabernet Sauvignon was altogether a far better wine and I bought a bottle, being excellent value at R89. Medium garnet and full bodied in appearance, the grapes are grown on South-West facing slopes with the wine aged similarly to the Cabernet Franc. The wine showed far greater intensity and complexity on the nose – aromas of cassis, mulberry, plum, bramble and black cherry – with a freshness that defied the 2014 vintage. Tannins gave grip and were opening up for a pleasant structure in the mouth. 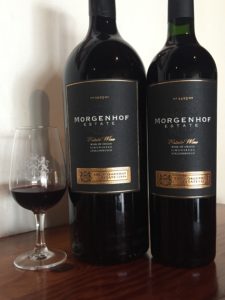 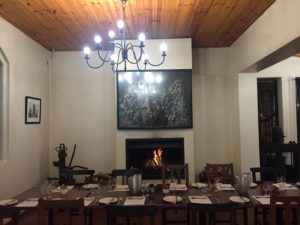 The Cabernet/Merlot led Bordeaux-style blend, The Estate, was my final wine of the tasting. Slightly deeper in colour than the Cabernet Sauvignon, no doubt due to 13% Petit Verdot, the wine showed sweeter and more rounded aromas of red and dark fruits. Oddly for a wine with 5 cultivars, the complexity was less than that of the single variety Cabernet Sauvignon. The mouthfeel was softer, aided by silkier Merlot tannins, to give a balanced wine with medium length that grew on the palate. 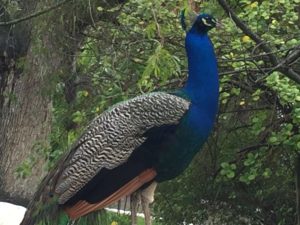 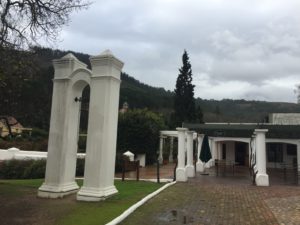 Morgenhof did the basics on a grey morning without frill or fuss. The tasting experience was simple and average, with the whites served far too cold, whilst the wines were mostly decently made – and priced – without being particularly special. The value for money element, tasting fee included, pushed my wine rating just into the 4/5 score. Nonetheless, it was good to return to Morgenhof without having to spend all day in the classroom and, at last, to taste some of their own wines. 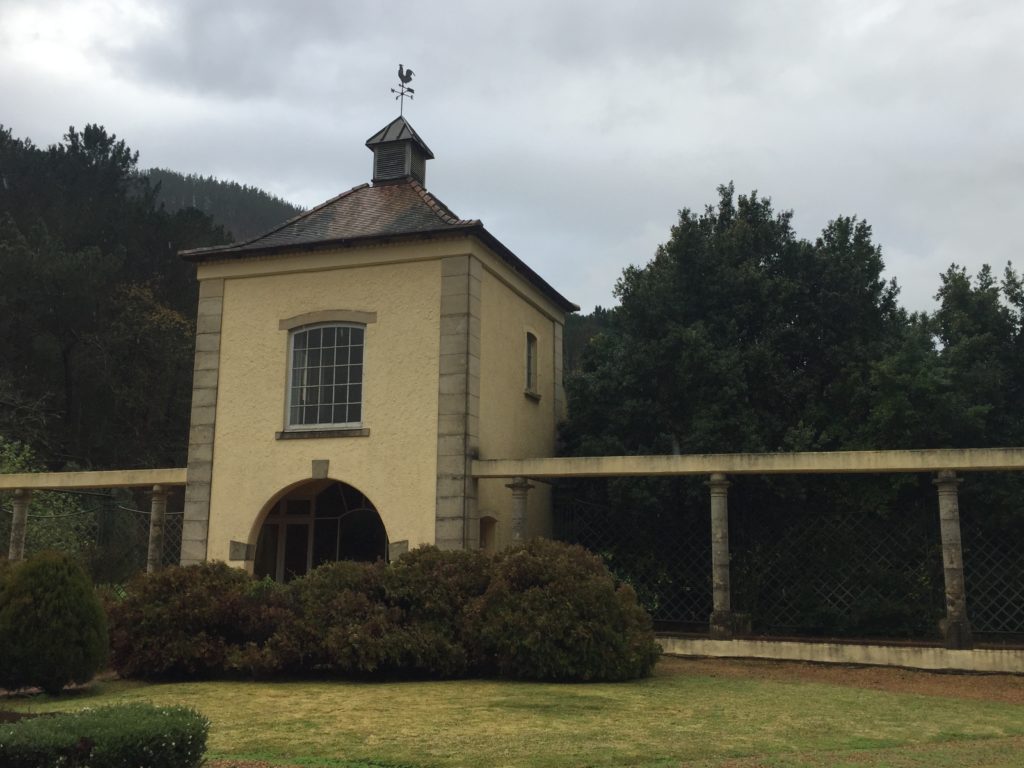