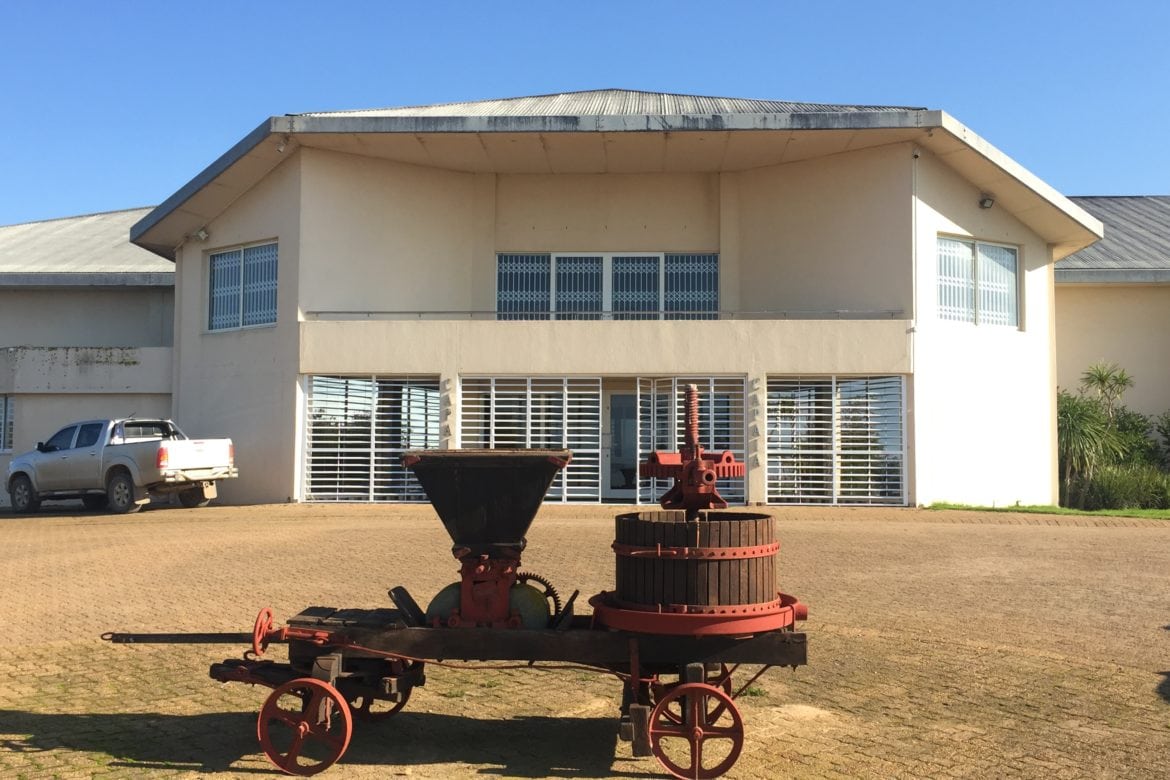 My trusty satnav was decidely quiet as I headed towards Capaia on a twisting road through undulating wheat fields, lush after recent rains beneath clear blue winter sunshine. I was the only car on the road and was starting to wonder whether to stop to check my route. I sensed relief as I passed bare vineyards, the vines mostly unpruned, knowing that I was near and heading in the right direction. I had left Cape Town three quarters of an hour earlier via the N7 – the road works seemingly never ending – past the Ostrich Farm and onto the Van Schoorsdrif Road. I arrived at the gate shortly after before turning left (after a small impromptu detour to the Restaurant – named after only daughter Mariella – that is temporarily closed for refurbishment) to the Cellar that was 3 kilometres from the paved road along a sandy then rocky dirt road. Capaia was not somewhere for the passing motorist or ambling drinker but therein lies its beauty. 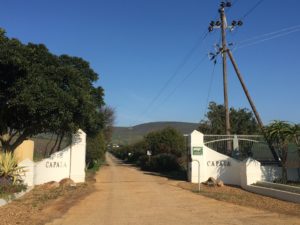 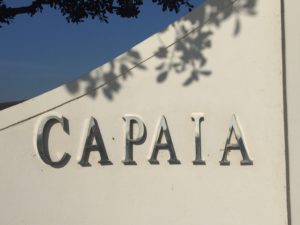 The view from the angular concrete Cellar building, paved parking area in front, was spectacular. This was classic West Coast landscape with gentle rolling hills. Table Mountain was clearly visible in the distance, some 30 kilometres away, beyond vines nestled against the warming South-West slopes with their roots deep in the mineral-rich slate and limestone soils. Capaia is the most Northern of the Durbanville vineyards, so much so that it has its very own ward – Wine Of Origin Philadelphia. The 60 hectares of Sauvignon Blanc, Merlot, Cabernet Sauvignon, Cabernet Franc, Petit Verdot and Shiraz vines are just 7 kilometres from the Atlantic Ocean at Melkbosstrand and so benefit from the cooling sea breezes that delay ripening and thereby enhance fruit flavour and acidity, aided by an altitude of 400 metres above sea level. 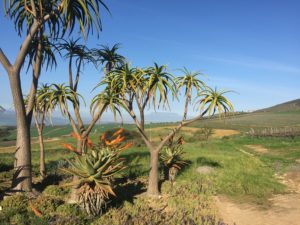 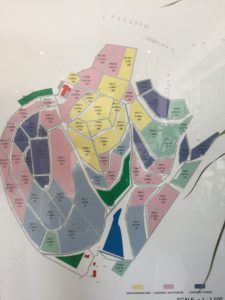 The virgin vines were planted by owner Ingrid Baroness von Essen who bought the 140 hectare former De Hoop wheat farm in 1997. She was joined in 2015 by business partner Comte Stephan Neipperg, who has been a Consultant to Capaia since 2005. The first vintage was made in 2003. The winery is built into the slope and embraces traditional and modern winemaking practices. Rika Fourie, Capaia’s Head of Logistics and Marketing, was my affable tasting host. She took me on a Cellar tour as I arrived. Production is mostly red (85%) with the (red) grapes de-stemmed above the vast 8,400 and 5,200 litre, gravity fed, oak fermentation tanks. They make an impressive sight, made from 150 year old French oak and built for 100 years or more of use, and believed to be the largest number (56 in total) in the Southern hemisphere. A separate cool room housed 1,500 French oak barriques, made by the same cooper as the foudres, for barrel ageing. 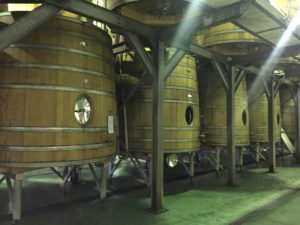 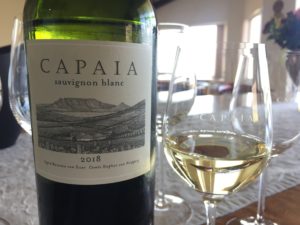 I was by now eager to taste the wines. The limited range includes just 4 wines (R30 tasting fee). The first wine for tasting was a Sauvignon Blanc, the sole white Capaia wine. This was the last of the 2018 vintage (the 2019 wine is being bottled tomorrow) and with elegant etching-styled label showing Table Mountain beyond the vineyard slopes. Aromas of gooseberry, lemon, lime, guava and pineapple gave good intensity of complex herbaceous and tropical notes on the nose. The acidity on the palate was enough to give the wine a crisp freshness but not so bracing to make it unapproachable. I liked the lingering green finish. 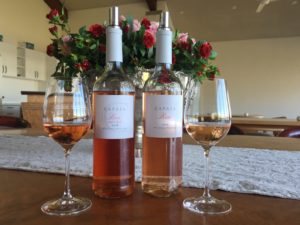 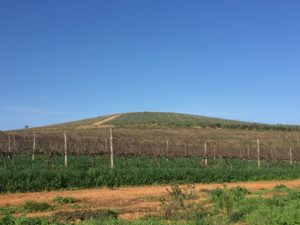 Rika treated me to a tasting of the 2019 Rosé, awaiting imminent release, as well as 2018 wine. The two Rosé were very different even though both made using a gentle press method. I much preferred the older wine that was made from Merlot with 8% added Sauvignon Blanc for extra acidity. Medium salmon to copper in appearance, the intensity of colour was matched by the nose of honeyed, sweet strawberry notes that showed limited complexity. Sweetness of aromas gave way to a dry wine with a clean mouthfeel with above average weight and medium+ acidity. By contrast, the younger wine was a delicate pale salmon in colour. I correctly guessed that it was made from Cabernet Franc (as I did the Merlot). The Rosé was shy on the nose with faint wild strawberry notes and lighter in character on the palate. 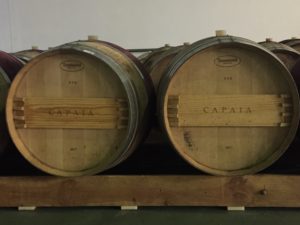 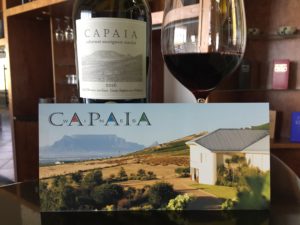 I tasted both of Capaia’s red wines. The Cabernet Sauvignon/Merlot was my favourite of the tasting. The Right Bank Bordeaux-style wine was just full bodied and made in lighter style with just 13.5% alcohol. Ripe, fresh red and dark fruits of blackcurrant, plum, cherry, mulberry and bramble with light cedar filled the nose. Oak flavours came to the fore on the palate to balance the juicy fruits for excellent balance. 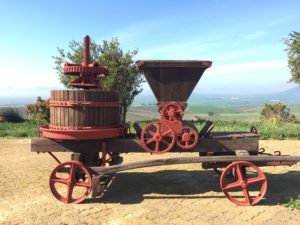 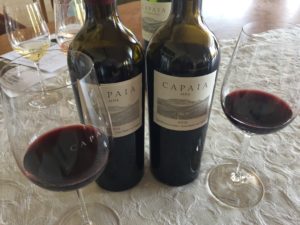 The One is Capaia’s flagship wine and generously priced for its quality at R140. I was fortunate to taste both the 2014 as well as the 2015 vintage as the latter has all been sold for export. I liked how the 2 wines were made from a different blend mix of cultivars which is a relatively rare practice for most South African wineries. This has the advantage of brand consistency but makes it difficult to pick out individual vintages. The One was definitely full bodied being Cabernet Sauvignon-led (78% for the 2014 vintage, 29% for 2015) and matured for 18 months in 60% new French oak barrels. Dark fruits predominated on the nose, in contrast to the Bordeaux-style blend, with aromas of bramble, blackberry, dark plum and savoury notes giving clue to early ageing. The intensity was good with good balance between the fruit flavours, acidity and smooth, softening tannins. The 2015 wine was richer and bolder in fruitiness, as expected from the stellar vintage, but showed less complexity. This was unexpected given the more even cultivar proportion (see below). Nonetheless, the wine was well structured due to prominent tannins. The One makes an excellent food wine and will age well. 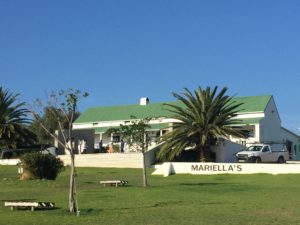 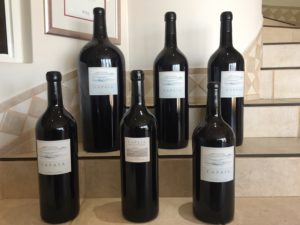 Capaia has been born out of nothing. The ‘aia’ suffix is used by the Italians to mean ‘much’ or ‘a lot of’. Think, for example, of the famed Chianti Classico estate called Volpaia that means ‘foxes den’ or ‘many foxes’. Capaia thus means ‘a lot of the Cape’ which is apt for the location of the farm and its integration into the physical and wine landscape. The Baroness and the Count have indeed done well. The range of wines is simple but they are well made and even better priced for their quality. Take a drive into the beautiful surrounds and stop by for a lunch or dinner in Mariella’s Restaurant (once re-opened). Better still, taste and enjoy the wines. You will find, to paraphrase the brand marketing, that the ‘Beauty Comes from Nature’ and the ‘Quality Comes from Within’. In short, and this is not always the case with South African wineries, and that Capaia offers ‘Wine Above All’. 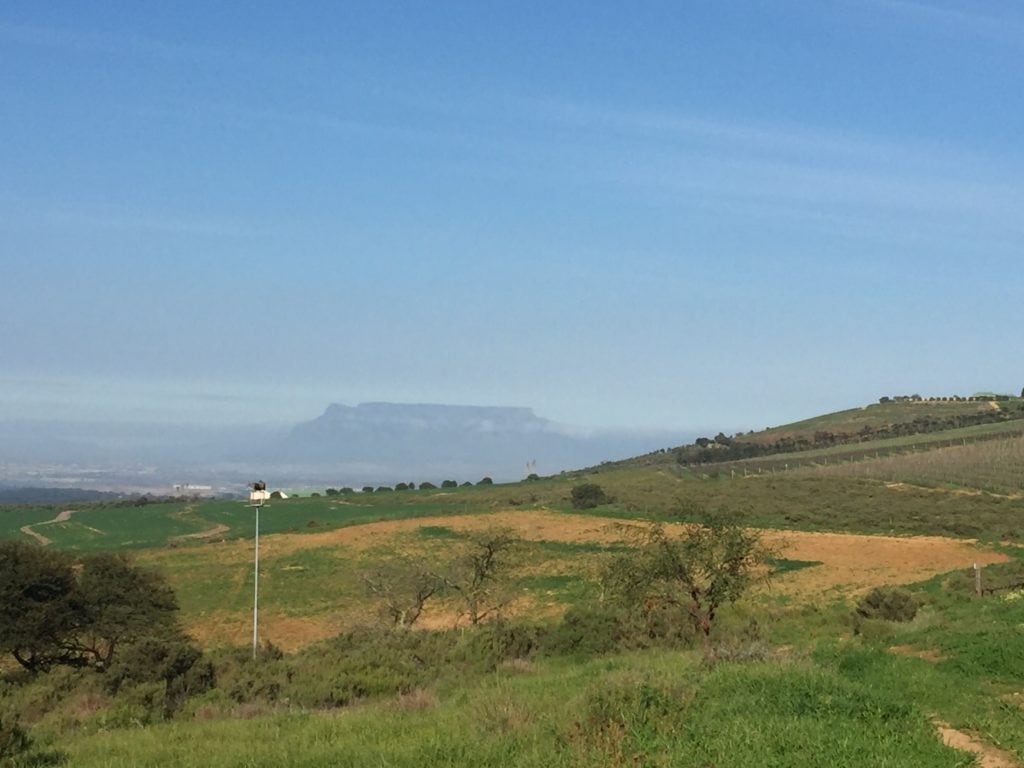