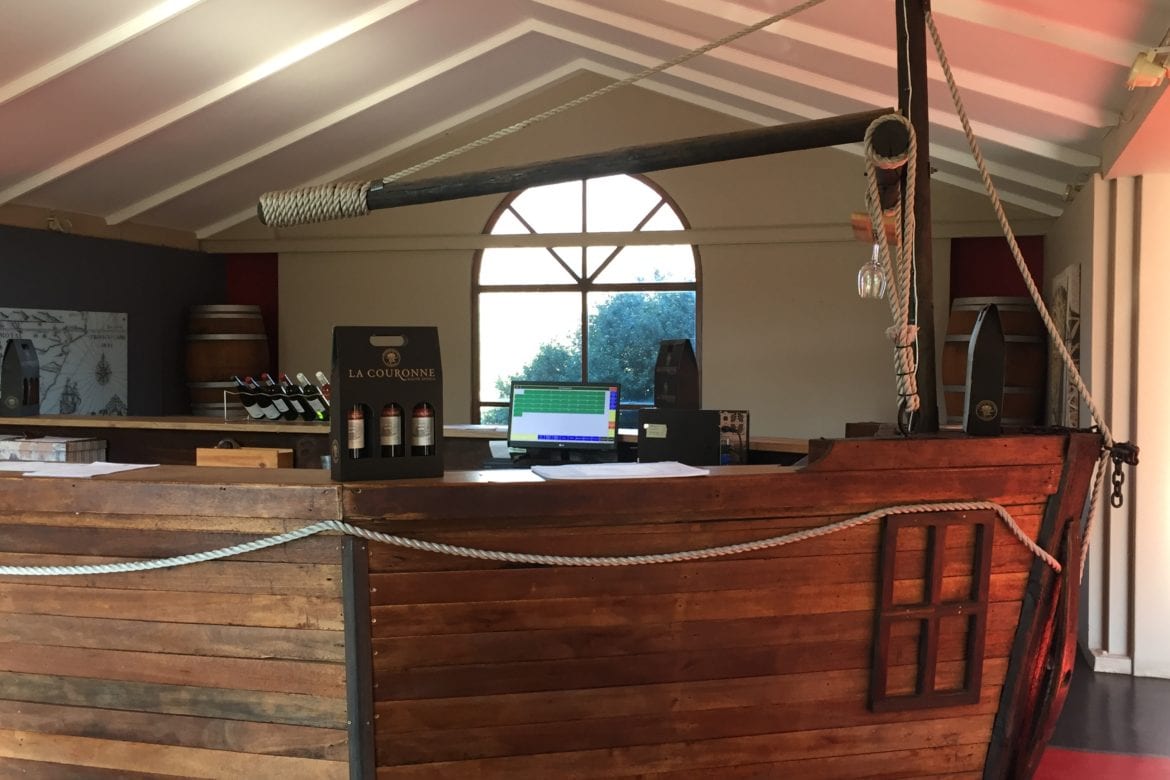 La Couronne was the final tasting of my day out to Franschhoek after tasting visits to Le Lude, Colmant, La Bourgogne and Haut Espoir. The wineries are all close to each other, barely 2 kilometres apart at the top end of Franschhoek, and so simple to combine. La Couronne is easy to find off Robertsvlei Road via Excelsior Road with its trio of blue, white and red tricolour painted barrels at the estate entrance. The 23 hectare property grows 9 varietals: Sauvignon Blanc, Chardonnay, Viognier, Shiraz, Merlot, Malbec, Cabernet Franc, Cabernet Sauvignon and Petit Verdot. 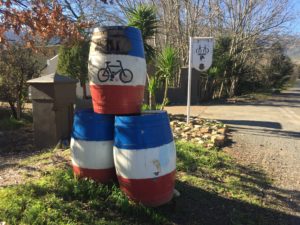 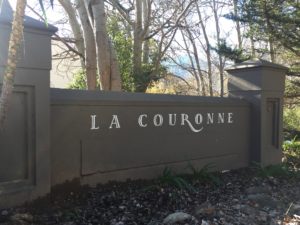 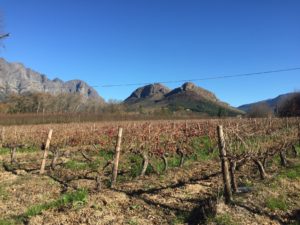 Ample parking close to vineyards with their spectacular mountain views in the winter sun led to well signed directions to the Tasting Room. Two buildings combine via a covered walkway in the peaceful and rural setting. The Tasting Room is elongated and spacious, with a second, large tasting area beyond that is past the top of tall stainless steel fermentation tanks rising from the Cellar beneath. A boat shaped bar gives clue to the nautical theme and origins of La Couronne. 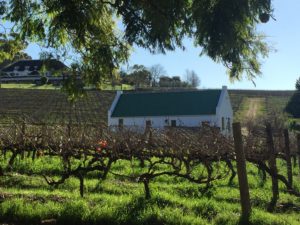 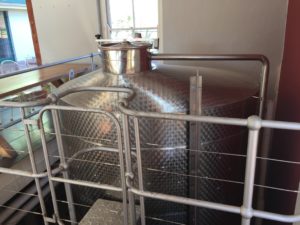 The La Couronne, translated as ‘The Crown’, was the famous French warship that brought Huguenot settlers to the Cape in 1688. It was the first French built man-of-war as previous ships had been built by the Dutch. The advanced vessel had 68 heavy guns with 8 firing to the bow and 8 to the stern. Seven generations of the Le Roux family farmed La Couronne Farm, known at the time as Champagne Farm, until 1946. Subsequent changes in ownership took place until Francois Smith bought the property in 2011. Sauvignon Blanc, a Merlot Rosé and a Bordeaux-style Portside Red were initially made. The renewed focus, including the planting of vines suited to the terroir, has led to successive expansion in the number of wines since 2012. La Couronne offers a range of activities beyond wine tasting and wine pairings, including wedding and conference facilities, nearby accommodation, and outdoor activities. The meaning also echoes a place where people gather and meet with families and friends; apt too for a wine estate. 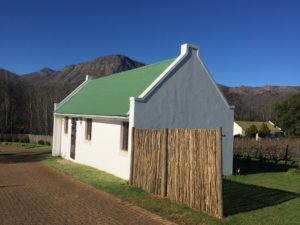 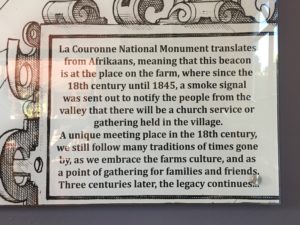 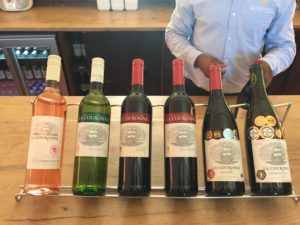 La Couronne wines have won many regional and local awards. Many of the wines are heavily stickered to show. The Tasting options were either R80 for any 4 wines from the Signature Range or R150 for the 4 wines from the Premium Range. These combine selected wines from the suitably named Sailor’s Selection, Commander’s Selection and flagship Admiral’s Choice labels together with the Limited Release Vins de Balise. Expensive as it was, this being Franschhoek, I opted for the Premium option. Neil was my tasting host. 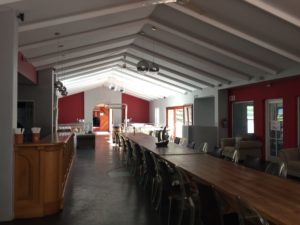 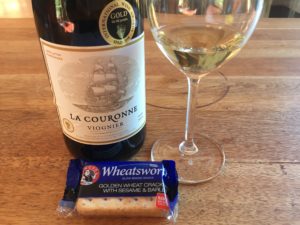 The first 2 wines were barrel fermented for 11 months in new French oak and both 2016 vintage. The Viognier – cheekily labelled ‘Appellation Franschhoek’ – showed medium intensity aromas of orange, peach stone fruit, floral jasmine and slight white spice on the nose. The wine was not as full as expected on the palate with weak flavours held up by a bright acidity. 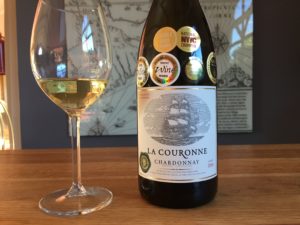 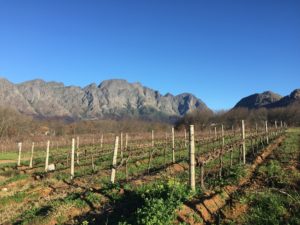 I preferred the multi-stickered, awards-winning Chardonnay. It had better intensity on the nose and a better balance between fruit flavours, acidity and dry sweetness on the palate. Oaky vanilla and caramel dominated more subtle baked apple fruits on the nose. I liked the richer feel and intensity of flavour in the mouth and the tight acidity. 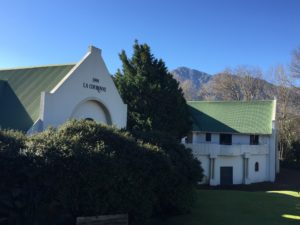 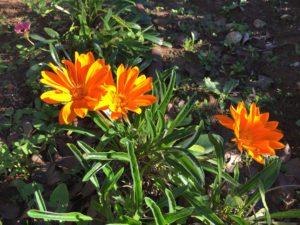 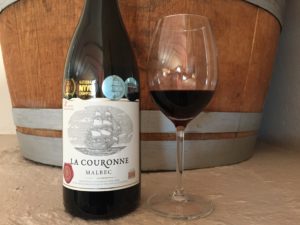 Malbec is usually used for blends by the Franschhoek wineries but La Couronne is one of only 3 wine estates to make a single variety wine, La Bourgogne which I had visited earlier in the day being 1 of the other 2. The deep purple coloured wine was just full-bodied in appearance with intense, ripe, berry aromas and those of blueberry, cassis and black plum. This was a bold wine with tannins (14 months in 2nd/3rd fill French oak) that overpowered the dark fruit and chocolate flavours. The Malbec deserved a large gaucho steak as it was too big to drink alone, seemingly containing more than the stated 14% alcohol. 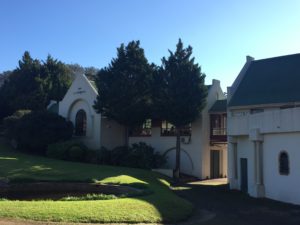 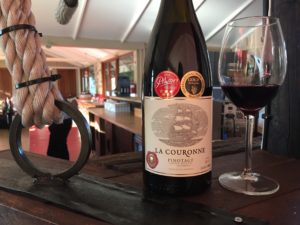 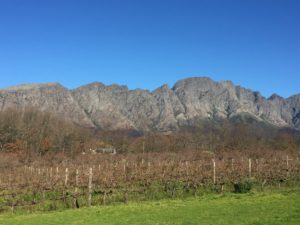 The Limited Release Pinotage, admittedly not my preferred cultivar, was my favourite wine of the tasting and made from grapes grown on bush vines. Bold, fruity and forwards on the nose, the full bodied wine showed notes of red and blackcurrant, mulberry, dark red plum, damson, banana, pear drops and nail polish. These followed through for a rich and powerful palate, aided by 15 months maturation in new French and American barrels, in which the tannins balanced and gave structure. The wine will improve on keeping as the tannins soften and integrate. 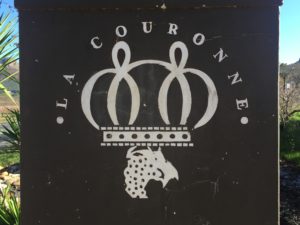 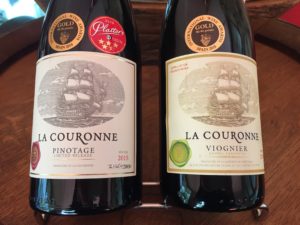 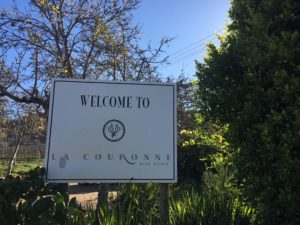 La Couronne, I sensed, was navigating on a safe heading after a period in choppy waters. The wines were variable – and I did not taste any of the lower priced R80 to R120 wines – as one might expect with a newish (May 2015) winemaker and investment in different cultivars. The wines were good without being outstanding, except for the Pinotage, and consequently above average in price for their quality hence the 3.5 wine rating. I did not buy any for this reason but then I did not buy from any of the other 4 wineries I visited today. This is an extremely rare occurrence for me. I sense too that La Couronne has survived rough seas and is now heading into calmer waters and will only improve in the future. 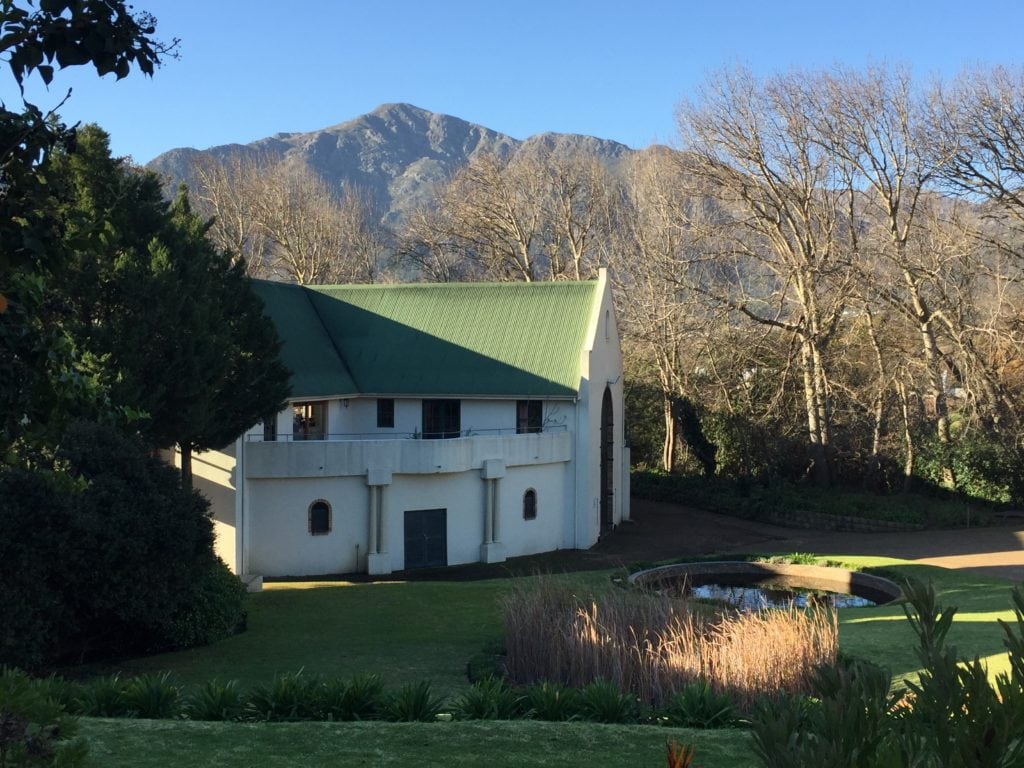