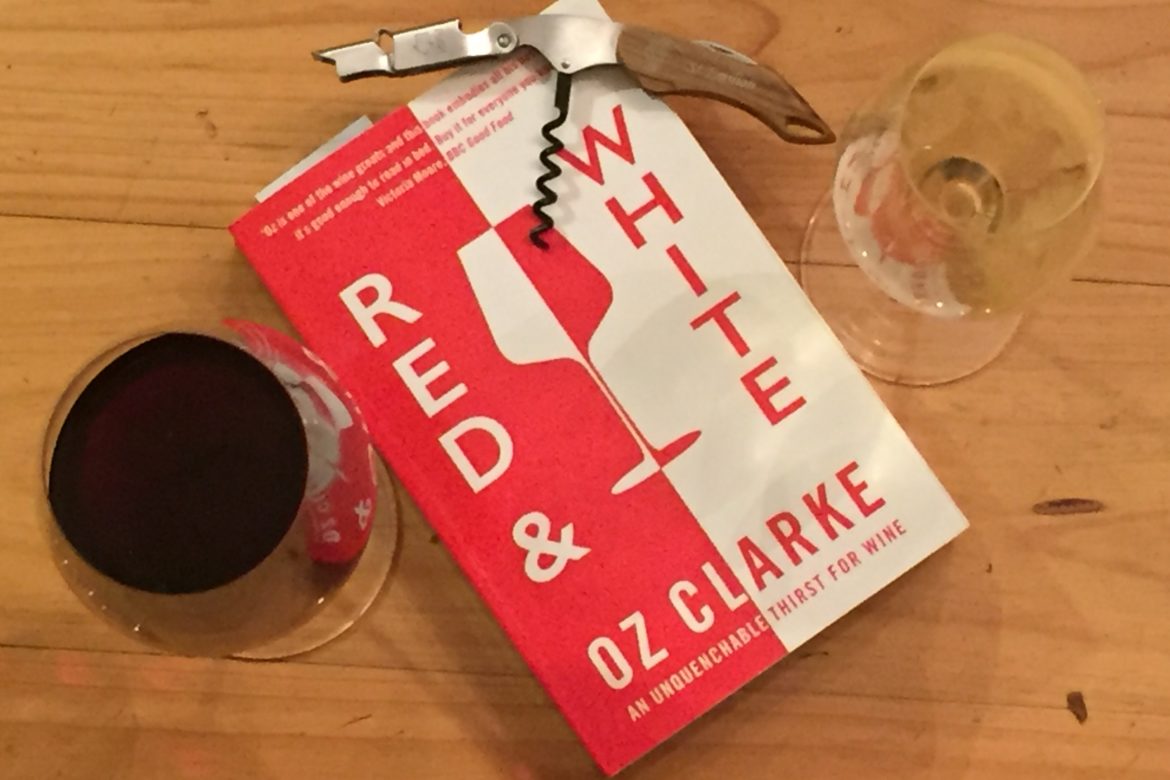 Oz Clarke and I went to the same school – The King’s School, Canterbury in England – but from there our career paths differed. I went to Cambridge University and he went to the other place. His early career was as a full time actor and singer whilst I, with artist parents, took the science route before joining the Royal Air Force. Our paths have returned to a close parallel as I learn about and write about wine. Thus it was late last year and amid revision for a Cape Wine Academy Diploma Theory Exam that I bought Red & White.

The book is in paperback and certainly full-bodied in appearance: 15 x 24 x 4 centimetres and with over 640 pages. I shall admit right away that I am not a regular reader of books. I rarely if ever read fiction but occasionally will pick up a book on travel or a biography. I am much more likely to be dipping in and out of several reference books, especially in recent years if they are about wine. This leads to my first observation: Red & White is both of those for me. The book is structured around a central half called ‘My World of Wine’ that covers each of the main wine regions and countries in the world. The individual chapters take the reader on a wine travelogue from France in the Old World to China and Asia in the New World, stopping en route in the main wine producing countries of Europe (England included), North and South America as well as Australia and New Zealand. There is a broad common structure to describe early beginnings and development of the wine industry in each country, exploring all the main regions. The chapters are well illustrated with excellent simple maps together with two sections of informative photographs. Oz Clarke’s approach therefore has just enough commonality so that the chapters hang together (instead of being a random collection in a single volume) whilst not being formulaic, thereby maintaining interest. His writing is very personal and full of humour that makes the book easy to pick up and difficult to put down. I found these central chapters very useful in support of my studies and revision because Oz Clarke added colour to my oft dry course notes. He has that uncanny knack to explain to give those ‘aha’ moments.

The entry and the finish to the national and regional palate, so to speak, are two sections called ‘Setting the Scene’ and ‘The Styles that Shape the World of Wine’. Oz Clarke sets the scene by describing how his early years at school and university took him to the stage and the performing arts before, as per the book’s subtitle, discovering ‘an unquenchable thirst for wine’. I relate so much to the attraction of wine and the thirst for discovery and learning. He then brings the reader right up to date with an interesting chapter that brings both Old World and New World together. Climate change and global warming, their impact inter alia on appellation systems, and fake wines all get a mention. Again, to bring all readers to a common level, Oz Clarke covers viticulture and viniculture under ‘Nature and Nurture’, before finally setting the scene with ‘Some Thoughts on Wine Tasting’. The latter shows his skills as a writer as he brings what can be a descriptive and rightly analytical topic to life by referring to his immense personal experience.

‘Wine styles of the World’ take up the final 200 pages. These focus on the major cultivars – Cabernet Sauvignon, Chardonnay, Pinot Noir, Syrah/Shiraz, Sauvignon Blanc, Riesling and the sparkles of Champagne and equivalents – that add extra dimension and complexity. This allows Oz Clarke to straddle the Old World/New World divide and to compare and contrast the styles of different countries. Like the chapters on individual countries, he resists a common writing framework. Some relate cultivar with country – Cabernet Sauvignon from Bordeaux, Pinot Noir from Burgundy, Riesling with Germany – but others are looser. Red & White ends by taking the reader from the present into the future. Oz Clarke poses questions about how global can (or should) be those indigenous cultivars that inherently are local. What about the quest to make even better wines, the ‘nonsense’ about food and wine pairing, the rising average age of the wine drinker, and impact of the warming world? The cliff hanger is there and perhaps for a future book. Just as Oz Clarke and I shared our education in the same school so too I share his positivity and optimism. He ends with ‘I’m ready. I’m even looking forward to it’.

Red & White will equally appeal to the casual drinker, the wine connoisseur, and to the serious student. I liked how Oz Clarke is able to blend many different strands together to bring both complexity and approachability to the fascinating world of wine. The book has the huge benefit, in a faster and faster changing time, in being right up to date. I liked too how easy it was to read and how technical terms are used to the minimum (there is even a handy Glossary to explain). I thoroughly recommend Red & White and especially for those who seek something other than a reference book. Oz Clarke draws from his significant experience of wine to give authority without being tempted to gain publicity by controversy or hidden agenda. I am grateful for that. Cheers!