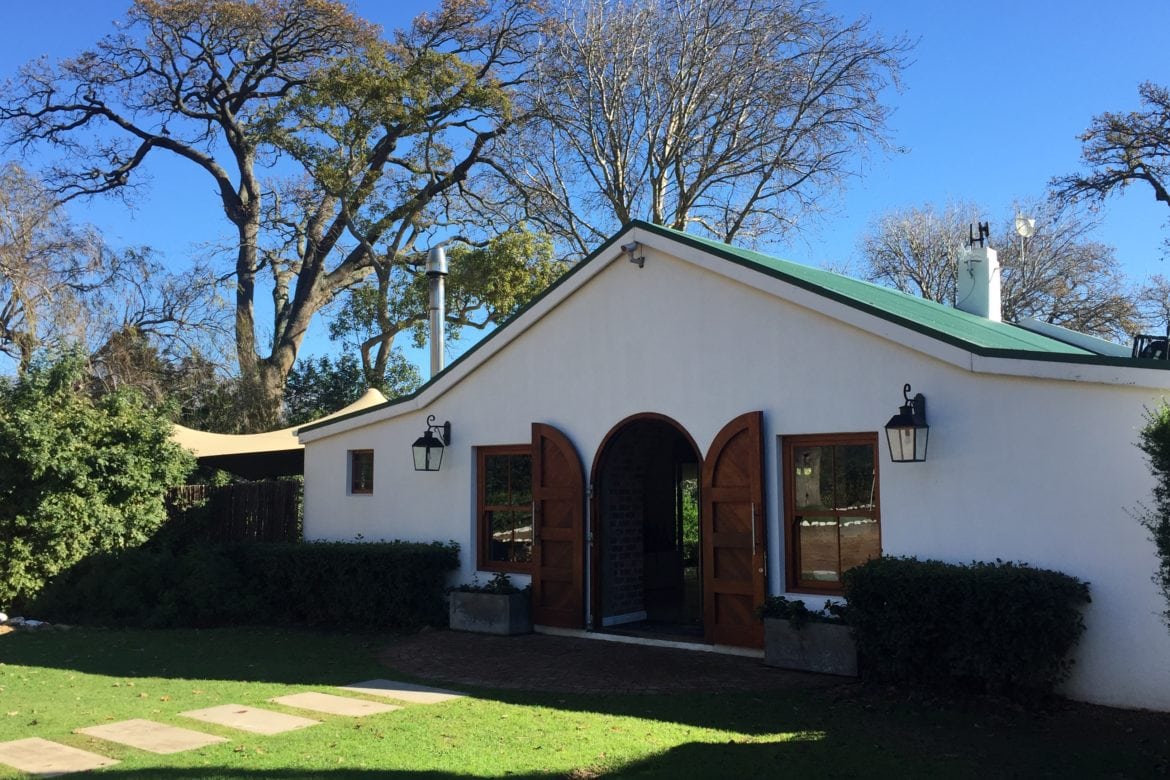 La Bourgogne nestles beside a tributary of the Franschhoek River barely 1 kilometre south of the Huguenot Monument in Franschhoek. The farm is easy to find with a self opening gate leading to a small parking circle in front of a white painted cottage. It could so easily be a private property but for the arched door way, reminiscent of a cellar, that gives the boutique winery away. Surrounding and close by the small, fast flowing, gurgling stream, swelled by recent heavy rain, are 150 old oak trees. These are particularly at the rear where in summer most tasting would take place. It being winter, I made my way inside to be met by Everet who was to be my tasting host. 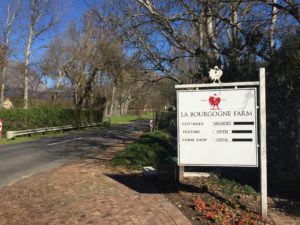 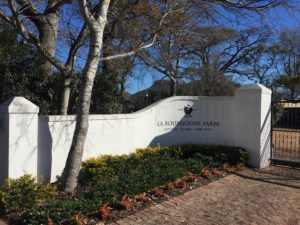 The interior was an unusual mix. Spanish crooner Julio Iglesias sang French songs. Olive oil and olives from the 2,500 trees on the farm, balsamic vinegars, jams and other products were for sale together with brandies and distilled products that filled the blue-grey display cabinet. There was a reception desk for the 6 self-catering Riverside Cottages and The Loft accommodation, an open plan kitchen, and limited Restaurant seating for overnight guests and other visitors. I sat at one of the lunch tables for the tasting. The tasting options unusually divided white from red wines and covered the flagship 1694 Range and the premium Progeny Range: Premium Tasting (one white, one red) R30; Flagship White Tasting (3 wines) R60; Flagship Red Tasting (3 wines) R60; and Aged (2016) Flagship Red Tasting (3 wines) R90. There were Speciality Tastings too that include Olive Oil and Olives (R80), Cape Brandy and Chocolate Truffle (R250), Wine and Caramel Tasting (R80) and Plodka tasting (R80). Plodka is a plum spirit wine made from the orchard trees just to the side of the building. 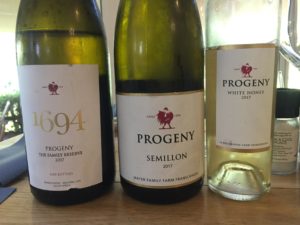 I learned from Everet that the wines are sold only on the farm so were unlikely to seen elsewhere. I opted for the 2 Flagship tastings to sample a cross-section of the higher quality wines. The Family Reserve was mostly Sémillon (80%) with added Sauvignon Blanc to bring extra acidity and complexity. Only 1,100 bottles are produced and aged for 14 months in new and 2nd fill French barrels. The shiny, pale straw wine did not show evidence of much oaking. Instead, lemon Sémillon sweetness met herbaceous Sauvignon Blanc on the nose with aromas of vanilla, raisin and grape. The wine showed a good intensity and moderate complexity. 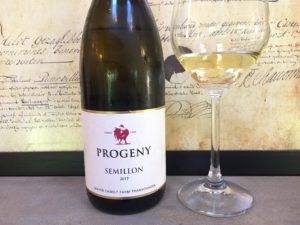 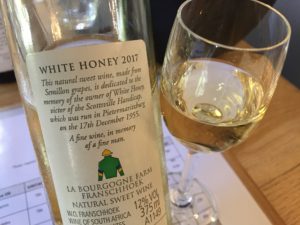 In contrast, the single variety Sémillon from the Progeny Range, matured for 18 months in 2nd fill barrels, showed similar character on the nose but with less complexity. The mouthfeel was rounded and with medium+ acidity. Next was a dessert wine – in unusual order due to how tasting options are constructed – made also from Sémillon and served in a small liqueur glass. Called White Honey after a winning racehorse of the Scottsville Handicap in Pietermaritzburg in 1955, the wine aromas of lemon, acacia and slight tropical/dried stone fruits were shy on the nose. The wine was sweet on the palate and needed more acidity for bite and to balance the sweetness. 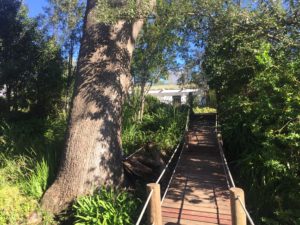 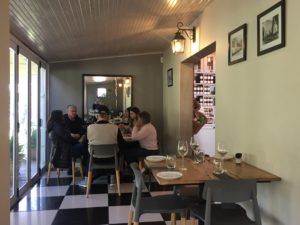 La Bourgogne dates back to 1694 when 66 morgen of land (equivalent to 56 hectares) was granted to Huguenot Pierre de Villiers by Governor Simon van der Stel. Successive changes in ownership subsequently took place. The farm was previously owned by the neighbouring Le Roux family who continue to manage the farm today. La Bourgogne was bought in 2003 by the late George Mayer to produce olive oil. There were no olive trees at the time but there was 1 hectare of Sémillon grapes. Adjoining land was purchased in 2005 with the result that the 23 hectare property now has 4 hectares of Chardonnay, Sémillon, Viognier, Malbec and Shiraz vines together with 4 hectares of olives and 9 hectares of plums. 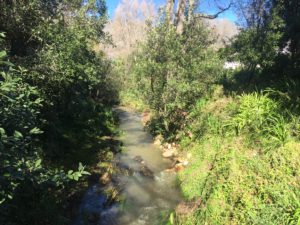 The first red wine was the Progeny Red and an unusual blend (my first) of equal amounts of Shiraz and Malbec. Aged for 14 months in 2nd fill French and American oak barrels, the wine was slightly opaque in appearance to make for a less worked wine than the shiny white wines. Dark berry, currant, blueberry and pepper spice aromas gave a fruity and juicy nose. The wine was lighter than I expected from the full nose to give an approachable, medium-bodied palate.

The 2 next wines of the tasting were the single cultivar constituents of the Red Blend, of 2017 vintage from the flagship 1694 Range, and made in limited quantity. The Syrah (1,730 bottles) was full bodied with ripe, dark fruits of black plum, black cherry, mulberry, bramble and black pepper. I liked the extra body and how the fruity flavours balanced tannins from 18 months in new and 2nd fill French barrels. 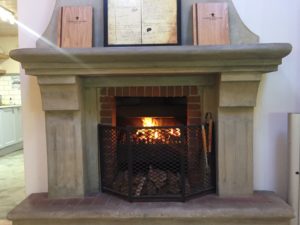 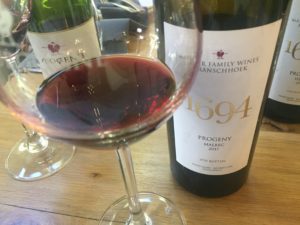 The Malbec (1,750 bottles) showed similar ripe fruits with blueberry and slight mint. Tannins were tight and just in balance. Everet kindly let me sample the 2016 vintage which I much preferred. It was my favourite wine of the tasting, showing best black fruits with far greater ripeness, intensity, body and weight on the palate. Flavour and tannins and acidity were better balanced also. 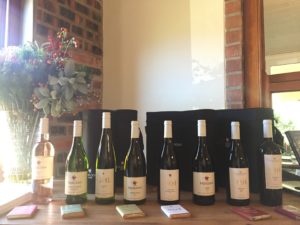 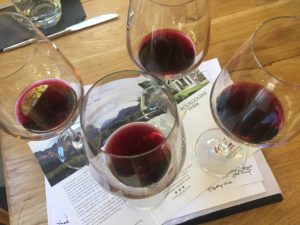 La Bourgogne made for an interesting tasting. It was not your exemplar tasting or wine estate (if ever there is one) but typical of many a small, boutique guesthouse-come-winery of which there are several in and around Franschhoek. Le Manoir de Brendel, for example, comes to mind. Many of the genre are available for tasting by appointment only and La Bourgogne has the advantage of regular opening hours and a central location. I am torn between a rating of 3.5/5 or 4/5 for the wines as they were mostly average with above average prices, even allowing for less common Sémillon and Malbec cultivars and premium Franschhoek pricing. The experience was average with little explanation about La Bourgogne itself and unwanted, fried breakfast smells from the kitchen filling the eating area that did not assist tasting. Nonetheless, if you enjoy Sémillon – cooler climate rather than rich in character – then do visit La Bourgogne. 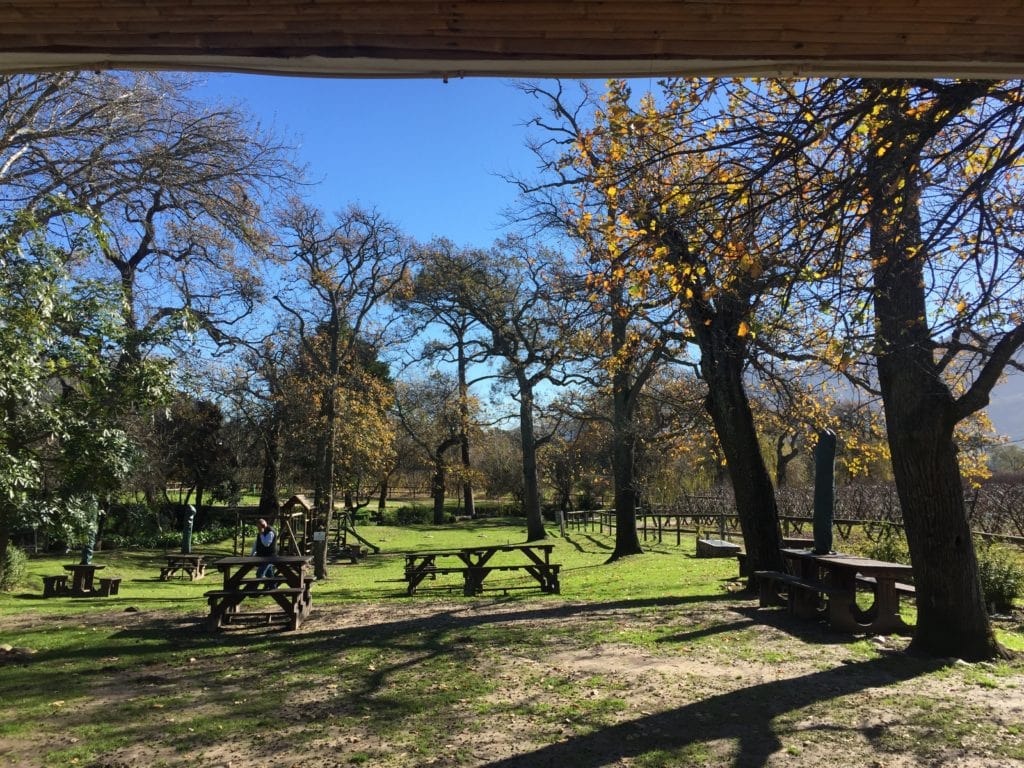