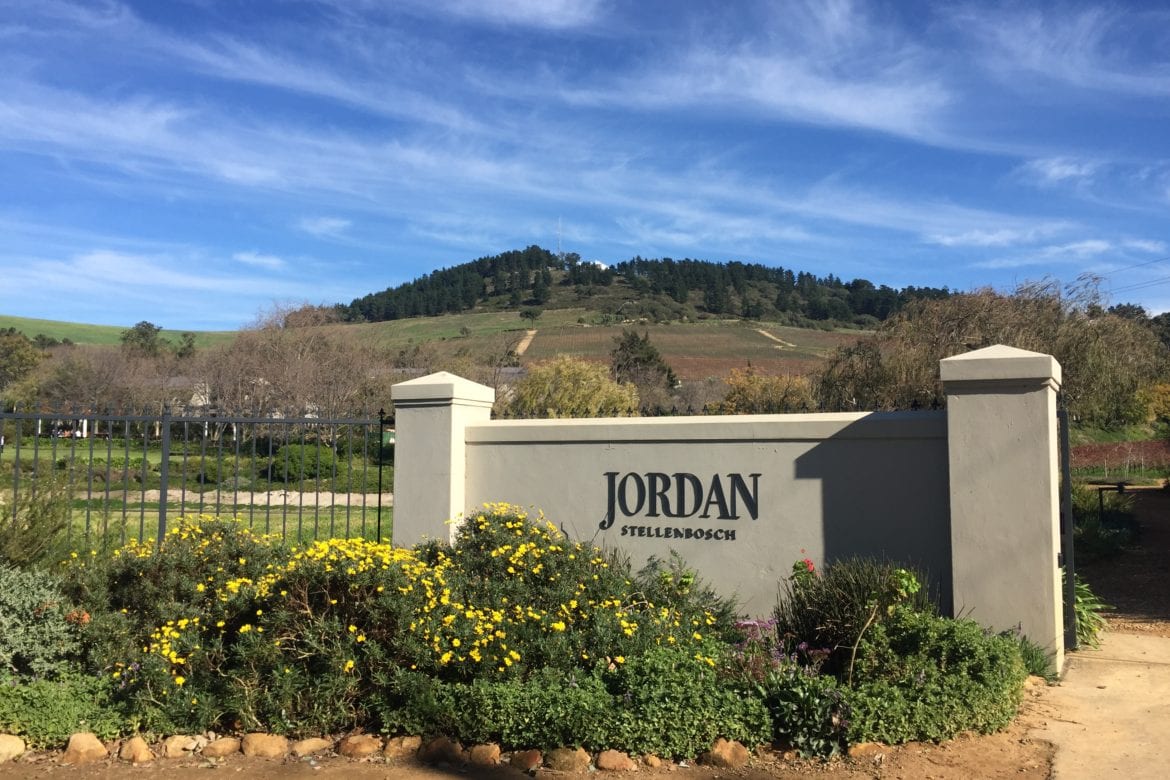 I visited Jordan for lunch more than 2 ½ years ago. I had been next door, so to speak, at De Morgenzon. De Morgenzon did not offer lunch so I ate at Jordan without sampling their wines. It was good to return and make amends. Fortuitously, or perhaps not, my usually trustworthy iPhone Maps satnav App took me to De Morgenzon and not Jordan although that was soon corrected by Google Maps. The distance between the two is only 600 metres. Jordan, like Haskell, Rainbow’s End and De Trafford, lies at the top of a valley, the Stellenbosch Kloof. The winery thus has access to a wide range of slopes and terroir. The Cape Granite soils of the 164 hectare property (105 hectares under vine) grow a mix of cultivars including all the major one on a range of East, West, South and North slopes at between 160 metres to 410 metres above sea level. This exposes the vines to coastal fogs and sea breezes that are so important to prolong ripening and to preserve vital acidity and flavour – False Bay is only 15 kilometres away – to give a maritime-influenced Mediterranean climate. Red and white wines are produced in almost equal amount. 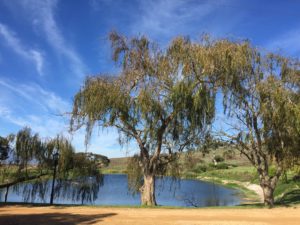 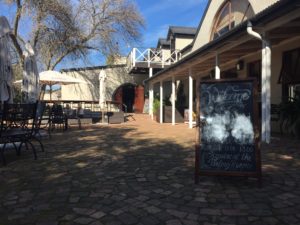 As I parked, I well remembered the attractive setting with tables set outside overlooking gently sloping lawns to the dam, surrounded by willow and other trees. I remembered too the Jordan Restaurant and The Bakery. The Tasting Room was functional and smaller than expected – especially given the extensive wine range – but then, winter excepted, I imagine most guests chose to taste outdoors to enjoy the magnificent views. Gershwin was my attentive host who had a good knowledge of the wines and their background. 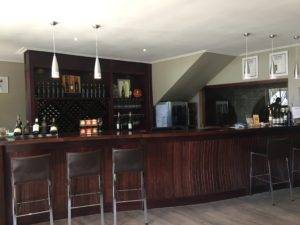 I chose between 2 tasting options: the Estate Range (3 wines for R50 or 5 wines for R80) and the Reserve Range (4 wines served in Riedel glasses for a heady R275). I chose to taste 5 Jordan Estate wines and ordered a cheese platter (R190) whilst selecting the individual wines to taste. I read after that Jordan produces wines from a number of other collections (some containing a single wine): the Chameleon Range, proceeds from the sales fund a PhD student to study the Cape Dwarf Chameleon; two Cape Winemakers’ Guild auction wines; the Sophia Bordeaux-style premium blend; a limited release Cabernet Franc; the parallel Jardin Range for export to North America, so named as to avoid confusion with Jordan Winery in California; and the Bradgate Range that is available only in the Tasting Room and a select few local restaurants. 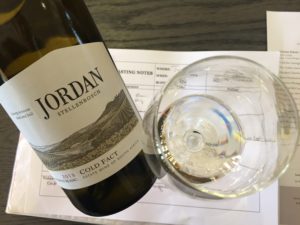 The cheeseboard was huge and well presented, containing a mix of tasty cheeses, pickles, olives and fresh fruits together with delicious warm breads from The Bakery. There was more than enough for 2 persons and Gershwin gave me a box to take home what I could not eat. I began with 2 Sauvignons Blanc that were interesting to compare together. Both wines were pale straw and very bright and shiny. The Cold Fact was a classic grassy styled Cape Sauvignon Blanc with aromas of lemon, lime, grapefruit and green pepper with refreshing, clean high acidity. The name is a play on words that blends both the Cold Soak album name by the legendary, lost then discovered South African musician Rodriguez and the overnight cold soak technique to extract sweetness and flavour from the grape skins – ‘searching for sugar man …’. 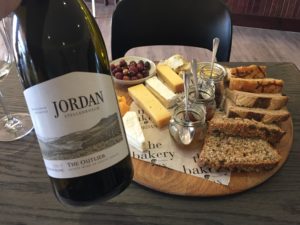 The Outlier was my favourite wine of the tasting. An outlier is something that is distinct and lies outside the norm. It makes a good name for the wine as it was lightly wooded, unusual for a Sauvignon Blanc, and made in Blanc Fumé style. Batches of the wine were barrel fermented for 8 months sur lie in 10% new and 90% 2nd/3rd/4th fill French/US oak barrels before being blended with 50% stainless steel tank-fermented wine. The winemaking made for a wine half a shade deeper in colour than the Cold Fact, with vanilla smoky notes to add to those of the herbaceous, citrus fruits together with a fuller intensity, weight and complexity on the palate. The judicious oaking meant that the primary fruit flavours were not overpowered for good balance. 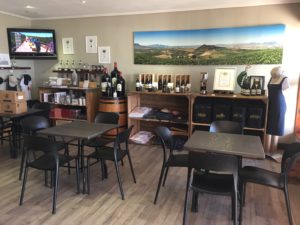 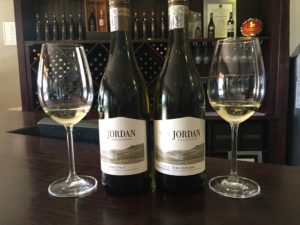 I tasted the 2 next wines together. Again, the first was unoaked and the second barrel-fermented. Neither Chardonnay had a name with a story but both were very shiny in appearance. The unoaked wine was, like the Cold Fact, a good example of the style with distinct green apple on the nose with lemon, lime citrus and delicate white honey and grape aromas. The medium+ acidity gave enough bite to give freshness with a modest complexity of flavour. This is an easy drinking Chablis-styled wine and good for those who do not favour the bracing acidity of a Sauvignon Blanc or the wooded character of a classic oaked Chardonnay. 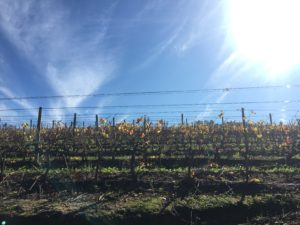 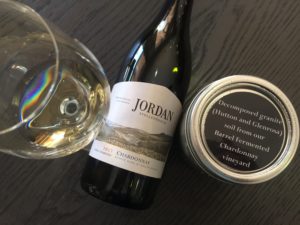 I preferred, just, the bolder barrel-fermented wine that was made in Burgundy style (9 months in 33% new French oak with 10% added tank-fermented wine for added freshness). The oak treatment was pronounced to give a sweeter, vanilla nose that just balanced the apple citrus aromas without overpowering them. The Chardonnay showed distinct smoothness from the barrel and malolactic fermentation with a slightly bitter finish albeit the acidity was well integrated. 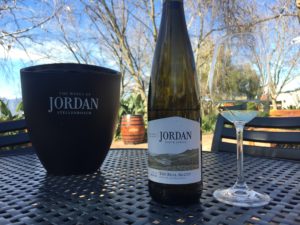 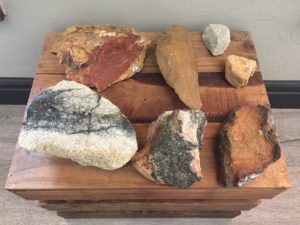 I asked to taste the newly released Real McCoy Riesling made from 30 year old German clone grapes, hence the ‘real deal’. The off-dry wine was made by stopping fermentation early to retain a hint of residual sugar (8.2 grams per litre). Obvious diesel notes with those of fresh lime, green apple and lemon meant that this wine could not be anything other than a Riesling, matched by balanced sugar and acidity and with a fruitier than expected flavours on the palate. 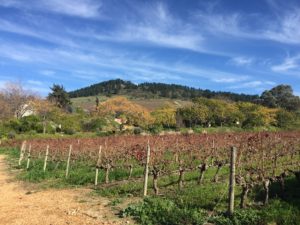 The Jordan family have owned the property since 1982, originally 74 hectares in size but since extended to 164 hectares by the purchase of adjacent land, with the first wines being made in 1993. Son Gary and wife Kathy make up the husband and wife team who now make the quality, individual Jordan wines. They have the right pedigree to go so. Match a geologist with an economist who both attended wine and marketing courses at UC Davis, California and throw in 6 months international internship practical experience in Sonoma, California and the blend for success does not surprise. 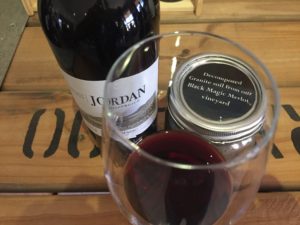 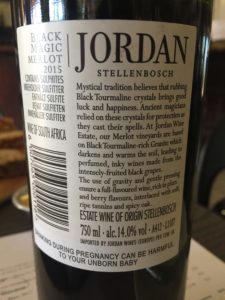 The remaining wines of the tasting were red, beginning with the Black Magic Merlot. Besides a nod to the almost magical skills of the alchemist winemaker, the name reflects the black tourmaline-rich granitic soils that darken the Jordan soils. The wine itself was just full bodied with classic Merlot notes of red fruits (redcurrant, plum and cranberry), cedar and sweet spice. The juicy fruitiness of the 2015 vintage showed on the balanced palate of lighter style. 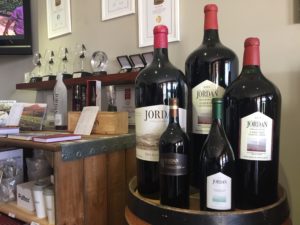 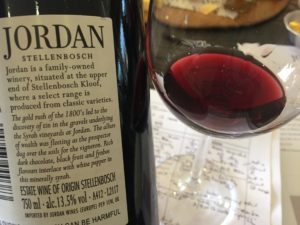 The Syrah was of light, sweeter style too that lacked a little of the intensity that the cultivar often shows. Named The Prospector due to the 1800s Gold Rush that discovered tin beneath the gravels in the vineyards and acknowledging the public support that prevented mineral prospecting in the Cape Winelands, the wine showed uncharacteristic sweetness on the nose (matured in American as well as French oak for 16 months) with warm red and black fruits and white pepper spiciness. Fruits dominated the palate for modest balance. 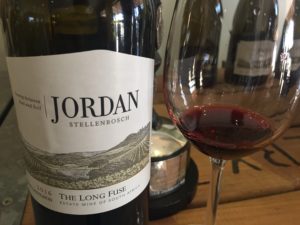 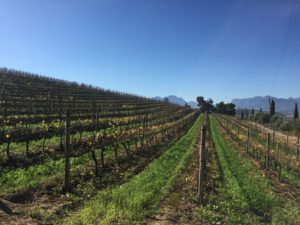 I preferred the final wine, The Long Fuse Cabernet Sauvignon even though, like the Syrah, it was made in lighter style and thus short in structure and length despite 18 months maturation in new French barrels. Medium intensity red and dark fruits on the nose needed greater intensity and complexity. The wine was perhaps a little too youthful and undeveloped and needed longer time to be at its best, akin to the ‘long fuse’ needed to lay 300 charges to excavate and blow up one of the larger sub-surface granite boulders n the vineyard. 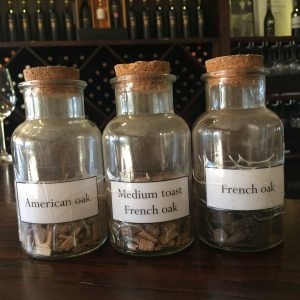 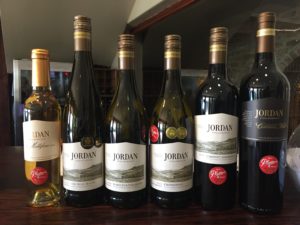 The Jordan byword is ‘quality not quantity’ so says Gary Jordan. This philosophy translates into the individual, quality wines that were technically well made and well styled, some almost to the point of being overworked. I liked the small attention to detail in the Tasting Room, for example the jars of shavings to show the aromas and flavours of French and American oak together with example soils. I liked too the wine names that told a story about the estate and its roots. Jordan put on a good show with predictable, safe wines with some interesting pairings of white wines to show the impact of oak maturation and a broad representative range of those that the Stellenbosch region can deliver. 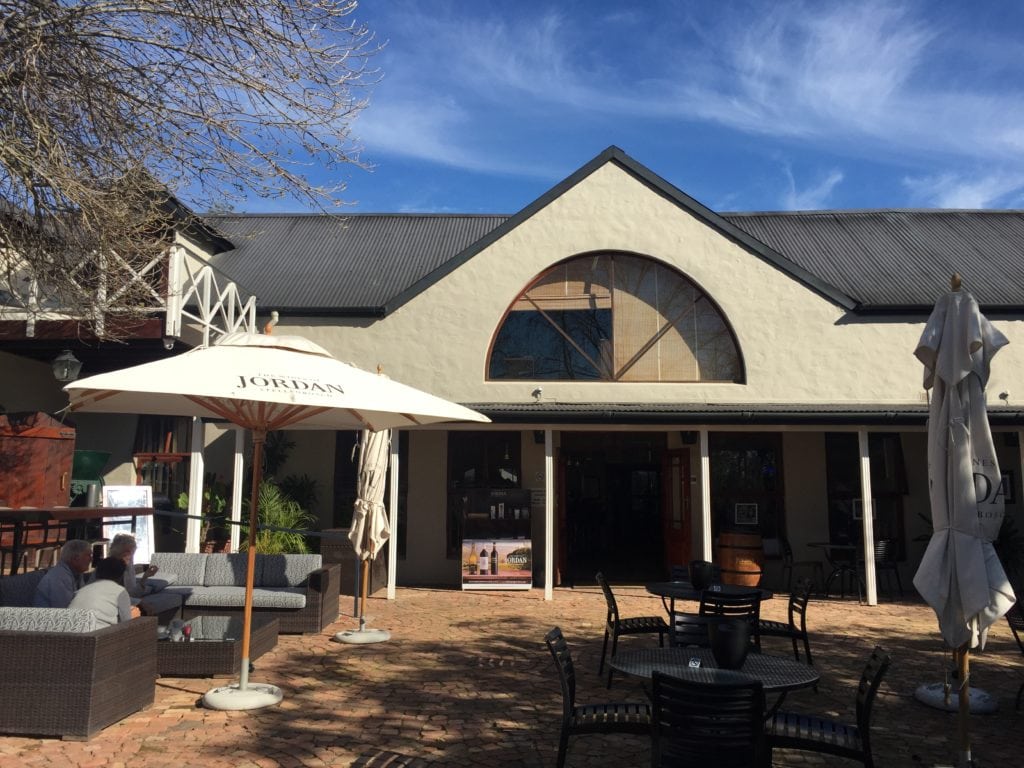