Home/Experience 4.5/Same but Different End to the Diploma Lectures

Same but Different End to the Diploma Lectures 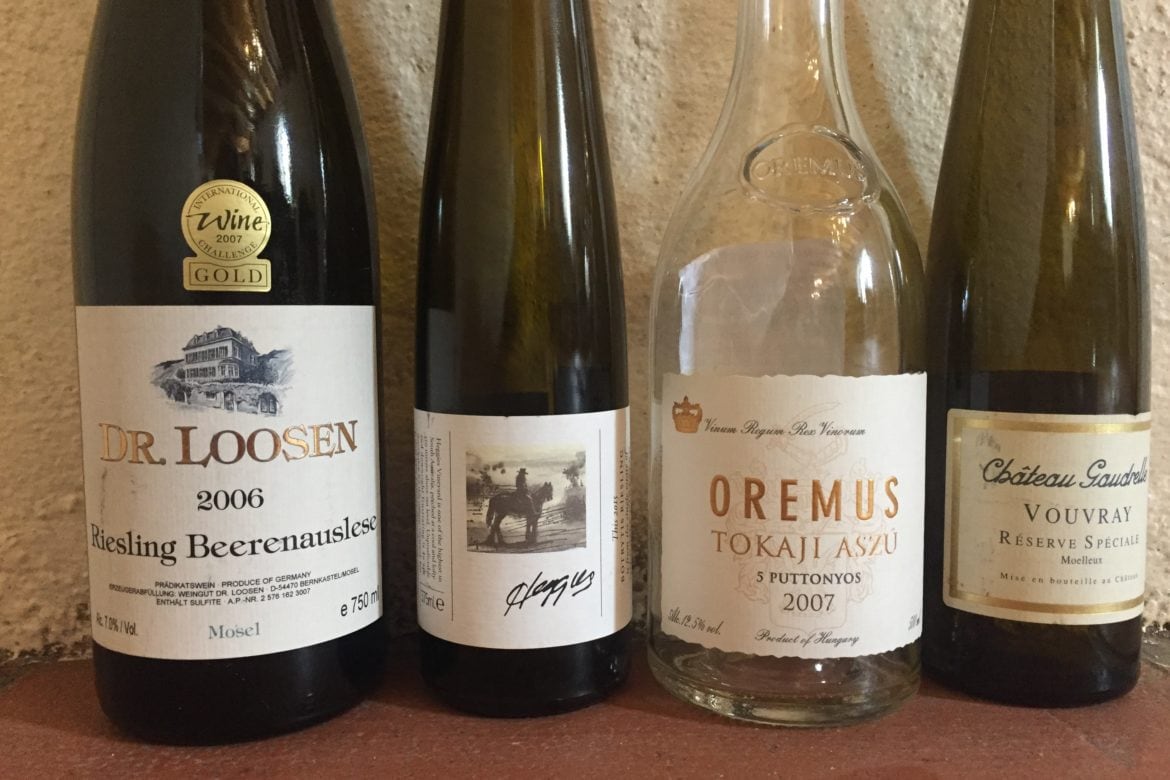 The first Cape Wine Academy Diploma lecture that I attended was in late-August 2017. Today, 21 months, 4 Modules, 11 days, 11 assignments, 3 exams and 26 lectures later, was my last. I arrived at Morgenhof Estate after my regular Saturday morning drive from Cape Town in time for coffee before start of the first lecture. It was good to see my student colleagues again as well as to see Catherine Dillon rather than the regular instructor, Dave March. I have nothing against Dave but it is always good to have a change in perspective. Catherine had lectured once before, for the lesson on Central and Southern Italy, during Module 3.

Further change came for the first lecture. All previous lectures, besides the Tutored Tasting at the end of each Module, focused on a particular country or wine region. Dessert wines – not included in the final Tasting Exam – were the topic for the first lecture. The long lecture, Catherine explained, formed a perfect lead-in for any students wishing to progress to Cape Wine Master training on completion of the Diploma Course. I will. Dessert wines, she went on, are made from grapes containing large amounts of sugar so that when fermentation is complete the wine still has a fruity sweetness. 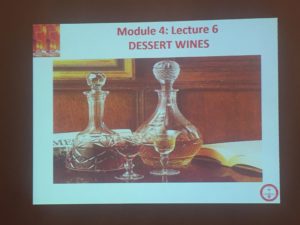 Sugars are concentrated when making a sweet, dessert wine by a number of methods. They start in the vineyard and include: Botrytis cinerea, freezing, raisining and stopping fermentation early. Botrytis cinerea, or noble rot, differs from unhealthy grey rot which has no benefit. The Botrytis fungus attacks individual berries, preferring close berried bunches, in specific conditions. Healthy grapes at 26 °B to 28 °B, humid misty mornings and alternating sunny afternoons are ideal. It was intriguing to learn that almost all of the world’s classic botrytised wines come from regions where two rivers meet: the most famous French sweet wines in Sauternes and Barsac; bottle aged Moelleux in the Loire Valley; the Beerenauslese and Trockenbeerenauslese of Southern Germany; and the Aszú wines of Tokaj in North-East Hungary. Each dessert wine differs in character and cultivar. Château d’Yquem is of course the most well known and made from only Sémillon and Sauvignon Blanc (80%/20%) whereas the other Sauternes and Barsac wines typically contain added Muscadelle for aromatic flavour. The harvesting is intense with as many as 20 tries, or picking passes, needed to hand select individual grapes with the right amount of noble rot. It is no wonder that the wines are so costly. 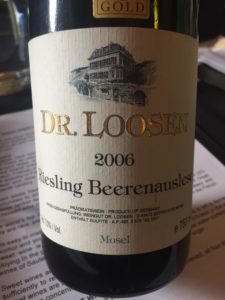 I had not heard of Moelleux as a wine before though had the Côteaux du Layon region in the Loire Valley where the dessert wine (botrytised Vouvray too) is made from Chenin Blanc grapes. Limestone soils of higher pH close to the River Loire enable the high natural acidity needed for the slowly ripening grapes. Catherine reminded that Beerenauslese and Trockenbeerenauslese refer to ‘selected berries’ and ‘selected dry berries’, respectively. Critical for these Riesling BA and TBA wines, as they are known, is their sugar/acidity balance (in contrast to that between sugar/alcohol for Sauternes). The wines are usually made from Botrytis-infected grapes but they do not have to be. The last botrytised wines were those of the Tokaji Aszú from Hungary. These are made mostly from Furmint and Hârslevelü and were called ‘the King of Wines and the Wine of Kings’ by Louis XIV of France. The puttonyes classification (puttonyes are the hoods into which the picked grapes are put) ceased in 2013, Catherine reminded. The sweetest Tokaji wines – Esszencia – can reach dizzyingly high levels of sweetness (914 g/l sugar in 2000), take several years to ferment and contain 2% to 6% alcohol. The wines are stored in Cladosporium-mould infected tunnels to make a ‘nice children’s cough mixture’!

We spent less time learning about the 3 remaining methods to concentrate wine sugar. As above, freezing to make Ice Wine (Canada – Vidal Blanc) and Eiswein (Germany – mostly Riesling) allows the sugars, acids and other extracts to be separated from the water and grape skins. Temperatures must fall to -8 °C to – 13°C for at least 8 hours. I pity the pickers in the cold wearing their protective gloves at harvest. The process of ‘raisining’ the grapes includes several methods: straw mats in the Jura to make vin de paille (literally, ‘straw wine’); drying on racks or hanging the bunches to make passito and vin santo wines in Italy; or even pinching the bunch stems and drying on palettes at Solms-Delta and Vergelegen, respectively, in South Africa. Last, and covered elsewhere in the Course, is fortification whereby grape spirit is added to stop fermentation and therefore preserve sweetness. This can be added either before fermentation (the liqueur muscats of Australia and South African jerepigos and tokays), during fermentation (France’s vins doux naturels, ports from Portugal, and muscadels in South Africa), or after fermentation (sherry). 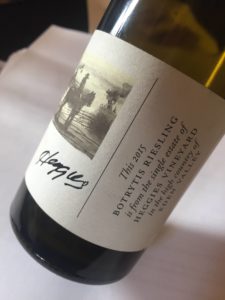 The tastings gave a welcome break from the long theory start to the morning. The first flight contained 4 dessert wines of different colour and intensity. Catherine left it for us to taste the wines and consider them before revealing what they were. She explained that a botrytised wine can appear more viscous due to the glycerol that is produced by the metabolic activity of the fungus. The first wine, a BA Riesling from Mosel was the deepest in straw colour with rich nutty and apricot flavours, low alcohol (7%) and low acidity. I rightly concluded that the second wine was a botrytised Riesling, with higher alcohol content (11%) and acidity, but not one from Australia. Less deep in colour, I noted that the deeper colour could be due either to high sugar concentration, the use of oak, or bottle age. High sugar, Catherine said, is detected by coating on the palate. The Aszú, showing less dried fruits but more intensity, displayed a savoury character that is consistent with bottle age and the older, 2007 vintage. The last wine of the flight was unusual. It was shy in intensity that made me think, rightly, that it was from the Old World and probably a French wine. It was a Moelleux from Vouvray in the Loire Valley, a wine I had not tasted before. 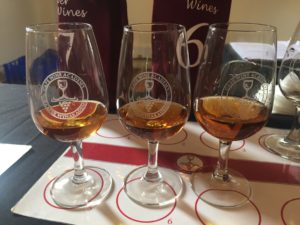 Three medium brown sherry-coloured wines were poured before the morning break for coffee. The tasting was rushed as I had neither finished tasting the previous flight nor had the full benefit of Catherine’s explanation about the wines before having to empty my glasses for the next pouring. This irritated as one seldom has the opportunity to taste flights of different dessert wines to compare. All 3 wines were South African and made using Riesling (with added Viognier for the Boschendal Noble Late Harvest wine). The first and last wines showed the characteristic, almost chemical (iodine) nose of a botrytised wine which was absent from the Natural Sweet Weisser Riesling from Perdeberg. 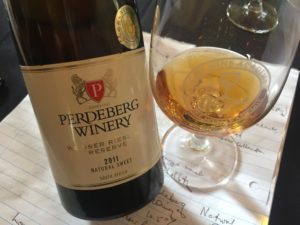 Coffee over, the final lecture of the course reverted to type with a Tutored Tasting, on this occasion focusing on the method of analysis and means of conclusion. We were reminded again of the difference between description and analysis, and the ‘rule in/rule out’ writing technique required at Diploma level and for the Tasting Exam. Entirely contrary to Dave March, our more regular instructor, Catherine showed us what can be concluded from the appearance of a wine. I liked the ‘CCOD’ mnemonic for Colour, Clarity, Other (e.g. sediment, CO2) and Development. CO2, for example, could indicate a young or recently bottled wine, or Riesling, Sancerre or Vino Verde. New World wines tend to be brighter as the wines are more heavily filtered. Brightness and vividity can give a clue to age as can deposits and colour gradation towards the rim. 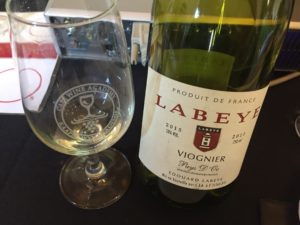 The next flight contained 4 white wines of similar pale straw colour. Catherine asked us to taste the first and then the next 2. The appearance, nose and palate of wines 1 to 3 suggested unwooded wines, most likely Chardonnay or Chenin Blanc due to their medium acidity (thus not Sauvignon Blanc, supported by the lack of herbaceous aromas or flavours, or Riesling, as no aromatic, diesel aromas). Both I and my student colleague concluded that the cultivar was Chardonnay due to the lack of any tropical fruit salad or warm, honeyed flavours. Nonetheless, the higher than expected acidity of some of the wines concerned and contra-indicated. When revealed, we were wrong as the wines were Chenins Blanc which explained the acidity level. The first was from France, a Vouvray (without the characteristic quince flavours) with the 2 other from South Africa.

The last wine of the flight and first of the next flight puzzled too. Of medium acidity and alcohol, showing evidence of light oaking, non-aromatic notes of apple citrus and vanilla, with average weight and a slightly creamy mouthfeel. The wines did not well fit any of the 4 exam cultivars – Sauvignon Blanc, Chardonnay, Chenin Blanc and Riesling – but did not stand out as anything other than perhaps a Chardonnay. Again, my colleague and I were in agreement and wrong! The wines were both Viognier, the first from the Pays d’Oc in France and the second from South Africa (I rightly concluded that at least). What had confused was that we were expecting the wines to be an exam cultivar, which Viognier is not. 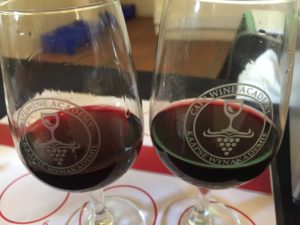 The final 2 wines supported Catherine’s good advice on what to think from the Nose and from the Palate. Again, the teaching and the tasting were somewhat rushed. I liked the thought process that Catherine used to explain and how each clue made sense in the overall jigsaw of evidence for conclusion of a cultivar. There was so much more that could be concluded from the appearance of a wine, notably its colour, than Dave ever considered useful or reliable. For the third time today and the final time of the Course, the 2 red wines proved troublesome. They were definitely not Pinots Noir by their appearance. The first wine was unmistakeably French to me which made either Merlot (Pomerol only as a single variety wine) or Cabernet Sauvignon (blended in Bordeaux wines and thus not single cultivar either) problematic. Both wines showed tannin structure but not the fruitiness or pepper spiciness, especially the first wine which was more savoury herbaceous in character, to be a Shiraz. It was the end of the Course as Catherine revealed the wines to be Cabernets Franc, another non-exam cultivar! 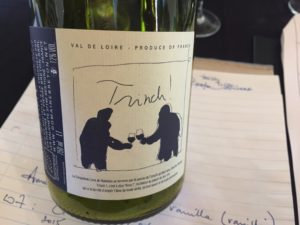 I ended the day, the Module and the Course itself with mixed feelings. It was great to have been taught by Catherine – even if a little bossy to start – as she gave me a different perspective on how to taste and what to conclude. Her explanations of the linkage between what the glass is telling and what it means were excellent. On the other hand, many of the tastings of the dessert wines especially were unnecessarily rushed which limited my enjoyment and learning of them. It was naughty of the Cape Wine Academy too for the final day of teaching of the entire course and immediately before our Tasting Exam to select non-Exam cultivars and non-representative wines. It goes to show too how humbling wine can be.

Above all, I did not leave with the whoop and a holler that I had half expected to have done. It has been a long 21 months. However, it is not yet over and this was the reason for my reticence. There is one last assignment to write, a 3 hour Theory Exam to pass and a final 2 hour Tasting Exam to navigate past – let alone the resultant marks – before I can relax. That is all in the next 3 weeks too. Sigh … 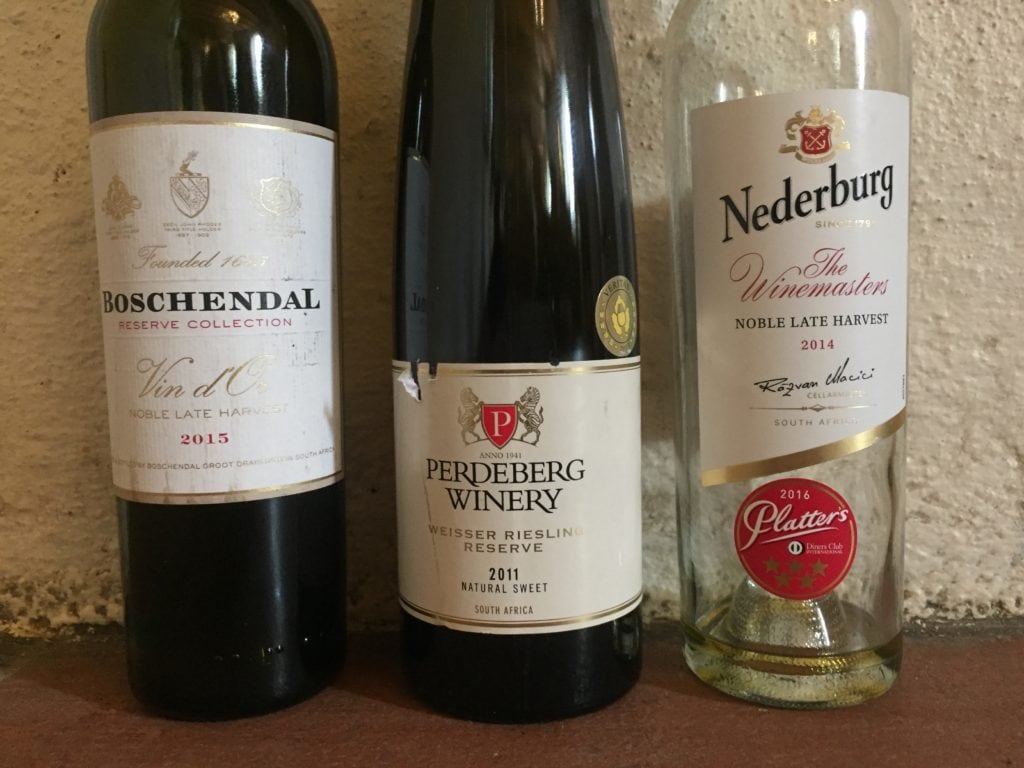