Home/Education/Dave Goes Down Under and the Wines Go Up

Dave Goes Down Under and the Wines Go Up 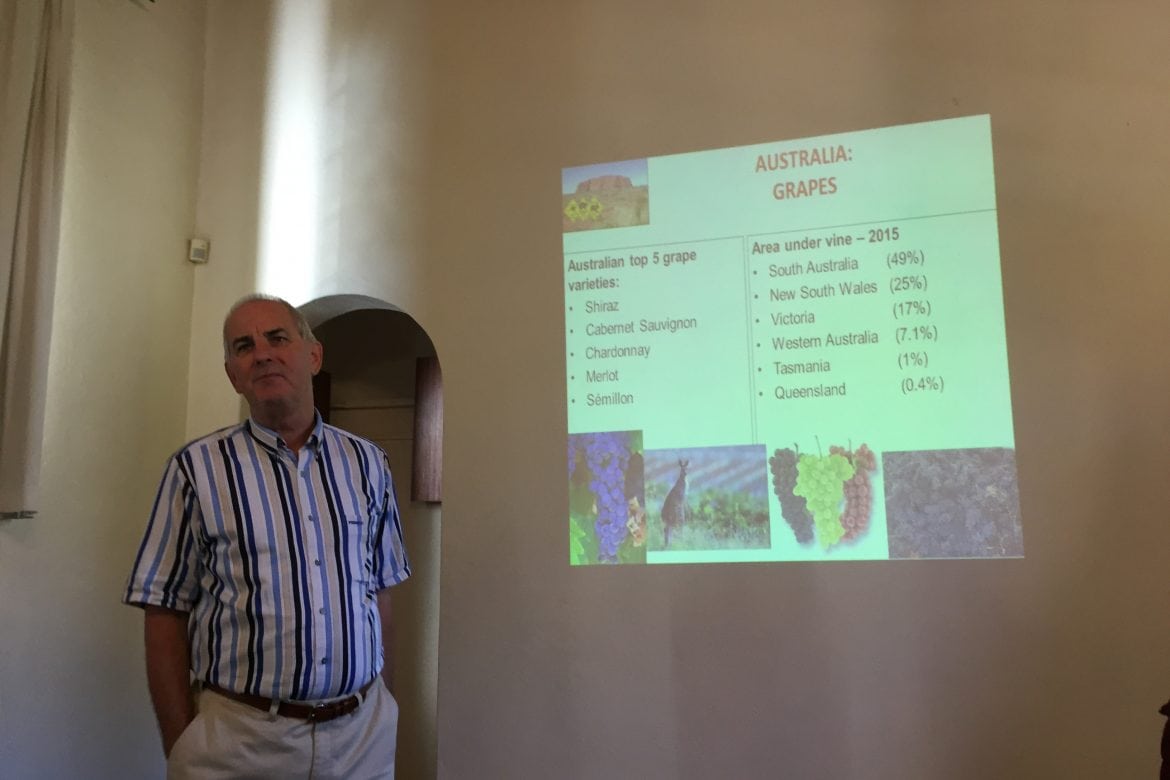 Today was the last day of lectures of wines of the world for my Cape Wine Academy Diploma Course (the final day covers dessert wines and revision tasting). It has been a long journey that has covered 4 Modules which began in August 2017 but nonetheless an enjoyable one. Dave March was the capable lecturer again. The wines for the previous day of instruction – of North and South America – were few and poor and so I and my fellow students were hoping today for improvement. The first wine had already been poured as I arrived in the classroom via the winter morning mists from Cape Town. It was a Zinfandel from California which, Dave advised, show the ‘signature’ Zinfandel stewed raisin, baked Xmas cake and Port-like character. 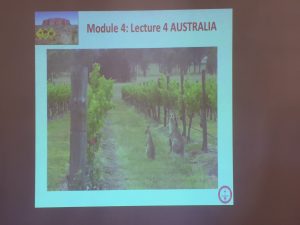 They say that what happens in America happens in the rest of the world after. That is not all true of wine but there are certainly parallels between the development of the cult wines and boutique wineries from humble beginnings in California with those of Australia. Go back to the 1960s and 1970s and beer was drunk most with sherry being the number 1 wine. Enter Max Schubert who spent time early in his winemaking career in Jerez and Bordeaux in 1949 and later started the Penfold Grange brand, which now has some of Australia’s most prestigious and expensive wines. It took him a while to persuade his bosses of the potential of his Shiraz-based Cabernet Sauvignon blend until, that is, a few years after when it won in a major wine show. Now does not that sound a familiar tale? 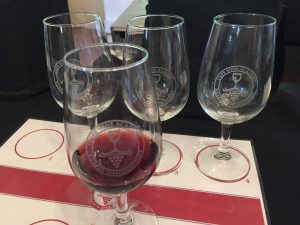 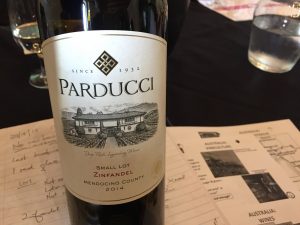 Meanwhile, the Australian wine industry – with substantial strategic, financial and practical help from the Government – set on a path to demystify wine and to make it accessible to all. This was not only in Australia but worldwide, using agents and aggressive marketing in supermarkets in Britain, Europe and elsewhere. ‘Brand Australia’ was so successful that the $Aus 4.5 billion sales 2025 target in the 1996 strategy plan was reached in just 6 years and currently is almost doubled in amount. The Yellow Tail brand did not exist 15 years ago; now it is one of the top 3 in the world.

The era saw the rise of the ‘Bloody Good Chardonnay’ and ‘Sunshine in a Bottle’ approach that gave consumers simpler and more information, with details about food pairing and ageing potential routinely printed on bottle labels. Dave, who like me is English, revealed that the first wine he drank was Lindeman’s Bin 65 Chardonnay from Australia. China is the number 1 export market in both value and volume. I was surprised to learn that Australia has only 135,000 hectares under vine (South Africa has just under 85,000 hectares) as I would have expected a greater area. That said, the Australian wine industry employs 170,000 people which is fewer than in South Africa (280,000) due largely to mechanisation. 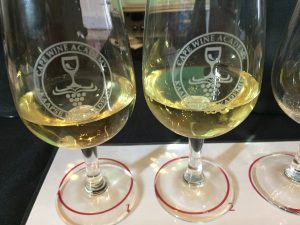 The risk of the ‘cheap and cheerful’ approach is not only that someone else will do it cheaper but also how to move on and develop a quality product and to improve reputation. Australia’s big new idea is to market wines using their story and origin as well as to focus on terroir. Each wine has a unique story and people like stories. There is the weird but understandable term of ‘critter labelling’. Put a kangaroo, wallaby or koala bear on the label and the wine sells. Banrock Station, for example, has tapped into the eco-conscious/guilt market with its ‘Save the Frog’ conservation wine that relates to the surrounding wetlands. There is the ‘cool climate’ wine approach in Margaret River (sound familiar?) as well the clever use of red labelling and the number 8 (Bin 389, 128 etc) for the Chinese market. 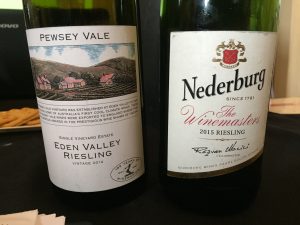 The first flight compared an Eden Valley Riesling with one from South Africa. ‘Lime, lime lime’ is the clue to an Australian Riesling, Dave explained. We then tasted Chardonnay from Adelaide Hills (a big wine showing classic coconut aromas from American oak), Durbanville Hills in South Africa and from Sonoma in California. Sadly, the Beaulieu Vineyards wine from the USA was marred by ‘Brett’ but nonetheless showed the oak and soft texture as expected. 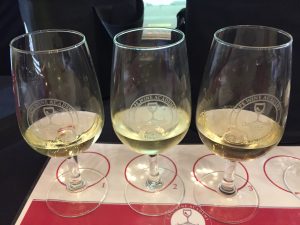 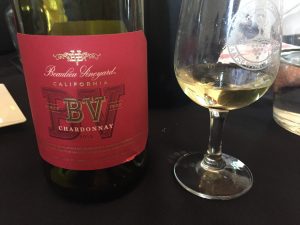 Australia’s wine regions hug the coastline, as elsewhere, for their maritime influence. We cantered through them, from Margaret River in West Australia to the Barossa Valley (Shiraz), Mclaren Vale (Bordeaux blends), Eden Valley (Riesling) and Clare Valley (Riesling and cooler Shiraz) regions of South Australia, to New South Wales and the Hunter Valley (Chardonnay, Sémillon and Australia’s oldest wine region) and the Yarra Valley in cool climate Victoria. Interestingly, the Barossa and Hunter Valley regions lie on the same ‘magic’ latitude as Stellenbosch (34°S). 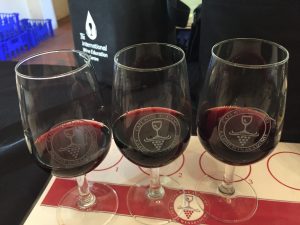 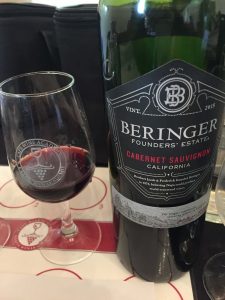 The next flight was of Cabernets Sauvignon, with examples from Margaret River (fruity), South Africa (Stellenbosch – earthy, oaky) and Napa Valley, California (sweeter, high tannin and dark fruits). The wines were certainly better than for Day 1 of the Module but Dave rushed the tasting and talked over the wines in his desire to cover the theory before morning coffee. I am not the fastest student at analysing wine and making detailed tasting notes and wished for more time to appreciate and understand the wines.

Australian wines are classified by a Geographical Indication system of zones, regions and sub-regions that is designed to protect the use of regional names. Soils play a less important role – which is interesting given the new terroir-based marketing approach – and there are little or no restrictions on viticulture and viniculture, a large difference to the Appellation systems in France and Europe. The 85% rule for the minimum fruit content from a particular region applies, which is the same as for South Africa. 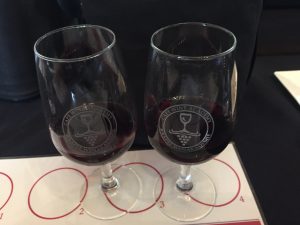 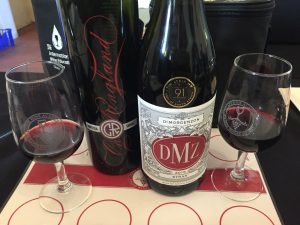 There was one final flight before morning break. This consisted of a sweeter Barossa Valley Shiraz and a familiar Syrah from De Morgenzon, Stellenbosch. As indicated above, I would have liked more time to savour and enjoy the wine comparisons.

The final wine country of the Diploma Course (besides passing mention of rapidly growing China and India) was New Zealand. Think New Zealand wine and you will think of Sauvignon Blanc. It was Cloudy Bay in Marlborough that put New Zealand on the international wine map as much as ‘Brand Australia’ did for Australian wine. The industry is little more than 30 years old with massive expansion in the 1980s, especially in Marlborough, as unsuccessful vineyards were grubbed out and replanted with mostly Sauvignon Blanc. Two-thirds of vineyard area is Sauvignon Blanc, followed by Chardonnay, Pinot Noir, Cabernet Sauvignon, Merlot, Pinot Gris and Riesling. Marlborough, in the North of the South Island, is the most planted region (77%, 84% of Sauvignon Blanc) with Hawke’s Bay in North Island the second biggest area. 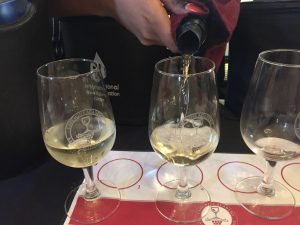 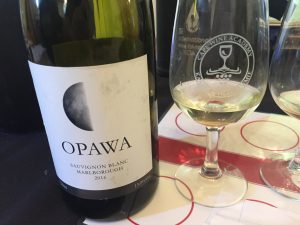 Tasting flights came thick and fast. We sampled 2 Sauvignons Blanc from Marlborough – one with characteristic gooseberry aromas/flavours together with those of citrus and high acidity, the other more tropical and citrus – and one for comparison from South Africa, showing more tropical fruits and less integrated acidity. The next 2 wines were Chardonnays, again from New Zealand (from Hawke’s Bay close to the Chardonnay ‘capital’ of Gisborne) and South Africa (De Wetshof). The New Zealand wine showed a creamy texture from malo-lactic fermentation, also old oak, whilst the well-made Robertson wine fooled me by its mineral character and integrated acidity, though showing greater intensity of sweet, baked apple flavour. Dave cautioned heavily against use of the ‘bitter’ to describe a wine as it was a negative term. I did not agree but made a mental note to use ‘tart’ or ‘astringent’ for the blind tasting exam in June. 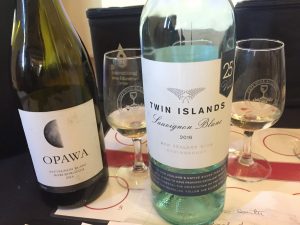 New Zealand currently has circa 38,000 hectares under vine which makes it between half to one-third the size of South Africa and twice as large as the Alsace region in France. The country took a very different strategic marketing approach to Australia to its cool climate wines. The focus was on making premium rather than ‘cheap and cheerful’ wines which has stood the industry in good stead. I remember seeing the New Zealand wines as the most expensive on the Tesco supermarket shelf in England with those from Australia being the cheapest. Three-quarters of production is exported. 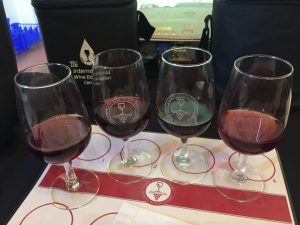 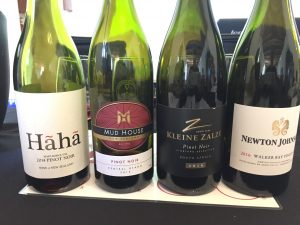 The final flight of the session was 4 Pinots Noir. It is one of the hardest cultivars to determine the country and region and I was just about half right. Two wines were from New Zealand, from Marlborough and Central Otago at opposite ends of South Island, and the 2 others from South Africa. Both New Zealand Pinots Noir showed the signature ‘purity of fruit’ that is characteristic of wines from the country. The Marlborough wine was more fruit-focused and slightly sweeter whilst the one from Central Otago, to the South, was more savoury and with silkier, more rounded tannins. The acidity showed on the Stellenbosch Pinot with riper fruits but the sweeter nature and lower acidity of the 4th wine suggested a possible Oregon, USA wine. It proved to be a Walker Bay wine from specialist Pinot Noir producer Newton Johnson. Intriguingly, I noted that Oregon and Marlborough – both known for their Pinots Noir – share the same latitude, being 42°N and 41.5°S of the equator, respectively. 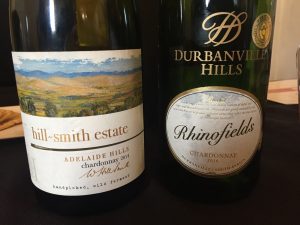 Thus, the near 2-year journey of the wines of the world’s major regions ended. There is one day remaining with one lecture each on dessert wines and a tutored revision tasting. It was good to lean about 2 of the wine countries that I know least about, namely Australia and New Zealand. It was good too that both the quality and number of wines for tasting was a step up from Day 1 of the Module, which they needed to be, as was their representative nature. The students rightly complained after the last sessions and credit to the Cape Wine Academy for the improvement. I would have liked more time with each wine flight (fewer off the track anecdotes from Dave would allow this) and also more time about the wines of China. The country is now reckoned to be the 5th largest producer in the world, depending on which statistic is used. It deserves far greater mention even if the quantity of wines currently being produced far outstrips their quality. I can see that changing and at least half a lecture, if not all, being devoted to China before long. Meanwhile, I have yet to taste my first Chinese wine (excepting traditional rice wines whilst living in Hong Kong some 30 years ago). 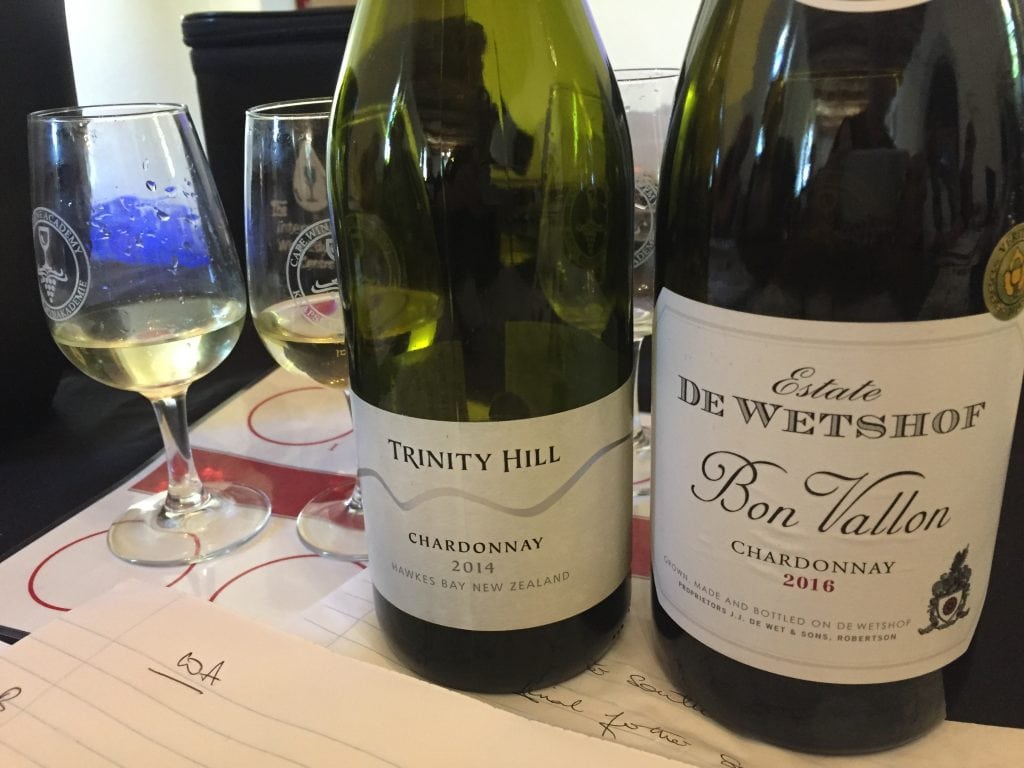