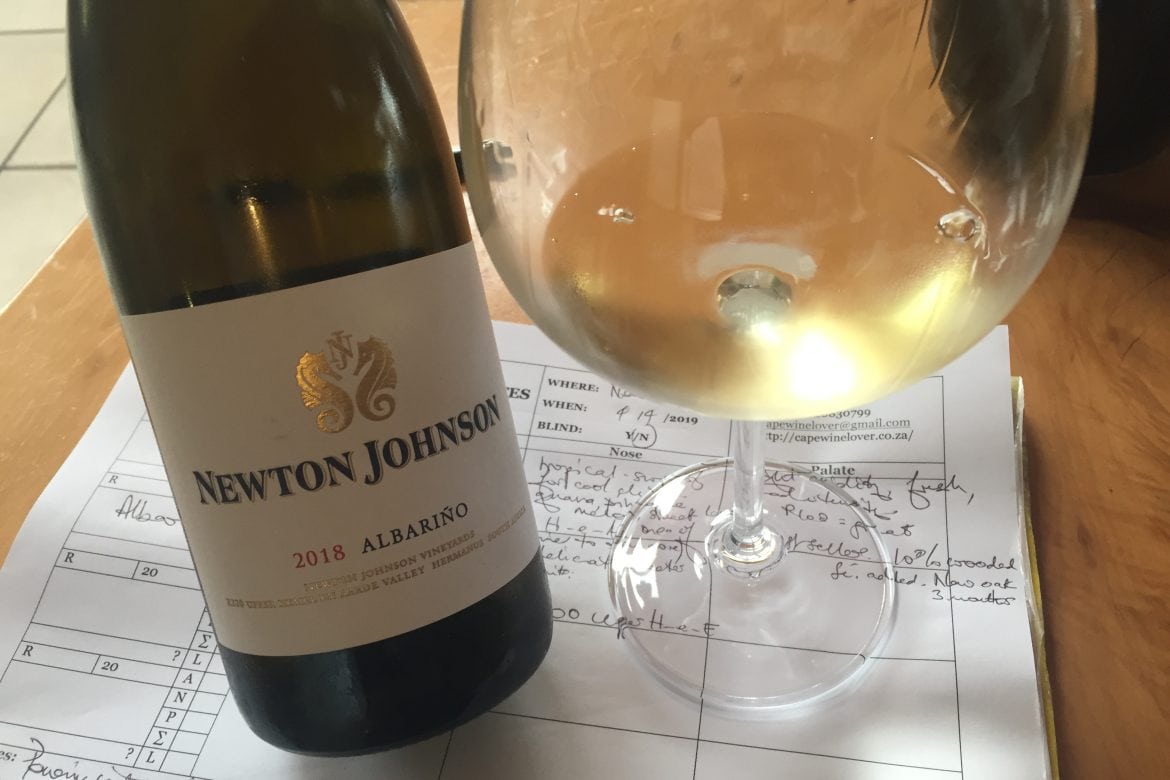 So much for the forecast of full sun, as I dashed amid heavy rain to the Newton Johnson Tasting Room. It was a short drive up the Hemel-en-Aarde Valley from Bartho Eksteen and, fortunately, unaffected by protest action to the North at Caledon. The windy road up through the vineyards was very wet. I had not visited Newton Johnson before but knew of their specialism for Pinot Noir. Nonetheless, I somehow expected either a historic, grander or elegant Tasting Building that the one that met me at the top of the slope. The tan building with its grey slate roof looked rather drab compared with the contemporary gilt opposing sea horses and ‘NJ’ family logo letters on the classic wine label. It was a relief to be out of the rain as I entered the similarly ordinary-yet-functional Tasting Room. Close my eyes and I could easily have been in Worcester or Wolseley or Robertson instead of the famous Hemel-en-Aarde Valley, but for the wall of framed 5 Star Platter’s Awards at the end of the tasting table. I am sure that the views from the elevated position would more than have made up on a sunny day but the outside seating and adjacent tasting area were closed due to the rain. 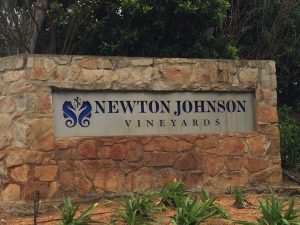 Lisa met me at the tasting counter and was my tasting host for the visit. Newton Johnson makes wines in 3 ranges: the entry Felicité Range (R50 tasting); the Newton Johnson Range, made from grapes grown on 18 hectares of the 140 hectare property together with those sourced from adjacent farms (R100); and the flagship Family Vineyards Range, from selected blocks in the best vineyards (R60). I tasted a selection of wines from the 2 best ranges. 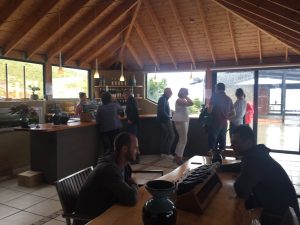 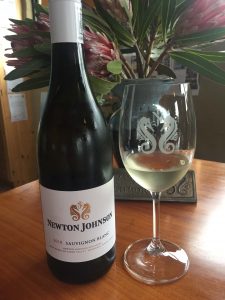 I began with the Sauvignon Blanc that, like that of Bartho Eksteen, had added wooded Sémillon (10%) for added body and tempered acidity. The very pale straw wine took a while to warm up to reveal a surprisingly tropical nose of guava, pineapple, melon and sweet lemon. I had expected the best seller wine to show cool climate green and herbaceous aromas instead. The palate showed a bright, fresh acidity and flavours of a good intensity to make for an excellent value for money white wine (R108). 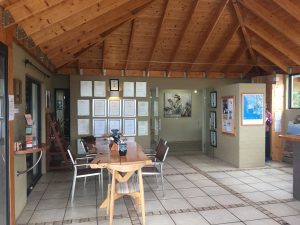 One reason for visiting Newton Johnson, besides it being the best known Hemel-en-Aarde Valley winery that I had yet to visit, was to taste the Albariňo. I had not tasted the cultivar before other than as a component of a cheap Portuguese Vinho Verde (where it is known as Alvarinho) that I bought from Checkers Hypermarket. The wine has been much in the press and social media recently with the release by Robertson valley winery Springfield of its maiden vintage. They hype led to the wine selling out and many, me included, would have been fooled into thinking that Springfeld was the first South African estate to make the wine. Newton Johnson planted the Iberian cultivar 5 years ago, with Springfield sourcing theirs from New Johnson.

It is always exciting to taste a new cultivar for the first time. Lisa explained that the Albariňo was the 4th vintage to be made and the first available in the Tasting Room. The wine was served in balloon Chardonnay glass and deeper in colour than the Sauvignon Blanc. The nose really interested as it did not fit onto any of my established white wine aroma families. It neither was green, herbaceous nor apple, vanilla, nutty nor honey, neither tropical nor aromatic, floral. I can best describe the aromas of being of delicate, sweeter stone fruits – of white and yellow peach and apricot. The apricot flavours strengthened on the palate that had medium weight and acidity with average length. The Albariňo is made using natural fermentation (as most Newton Johnson wines) and aged in a combination of concrete eggs (50%), stainless steel (25%) and older barrels (25%). I liked the wine and shall look forward to a tasting comparison with the Springfield Albariňo, having been fortunate to have been given 2 bottles for my recent birthday. 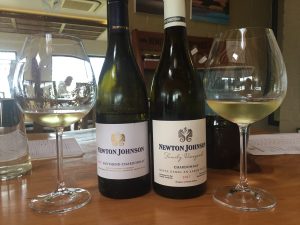 I tasted next 2 Chardonnay, one from each of the top 2 ranges and both Wine of Origin Upper Hemel-en-Aarde. The Southend Chardonnay, made using grapes from a neighbouring farm just 2 kilometres away, was paler in straw colour despite being matured in newer oak (50% compared with 30% new French barrels for the Family Vineyards wine). The difference lay in the terroir with the Southend wine coming from South-facing slopes (hence the name) and the flagship wine from grapes grown on North-facing slopes. The Southend was lemon zesty and green apple on the nose with moderate intensity. The wood showed on the palate to bring out apple and stone fruit sweetness to the medium acidity for a full mouthfeel and a good finish. In contrast, the higher priced, estate wine offered more classic Chardonnay aromas of baked apple, vanilla and slight raisin with a softer, creamier and more intense palate. 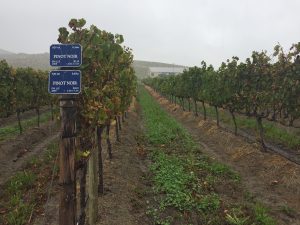 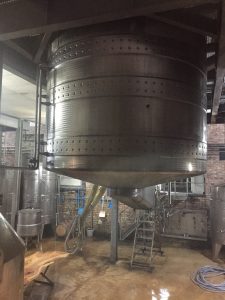 The 2 wines showed well the Newton Johnson philosophy to produce wines that fully reflect the different granite and clay soils, slopes and 150 to 300 metre above sea level plantings. These differences are further enhanced by different pruning regimes in the vineyard and minimal intervention in the cellar: spontaneous fermentation, gravity fed, no fining or filtration. It explains too the specialisation for Pinot Noir (5 wines are produced) as the cultivar is most sensitive to variations in the terroir and winemaking. Newton Johnson was started by David and Felicity Johnson (née Newton) who bought the property in 1995 and planted grapes first on virgin soils in 2001. The family business is now run by sons Gordon, with wife Nadia as winemaker, and Bevan who is responsible for marketing. The high regards with which Newton Johnson is held was marked by the inaugural award of the Platter’s Wine Guide Editor’s Award in 2019 as a current par excellence producer and South African wine ambassador over many years. 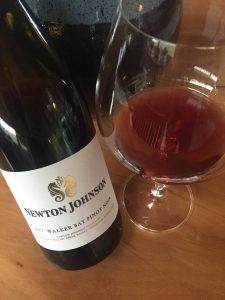 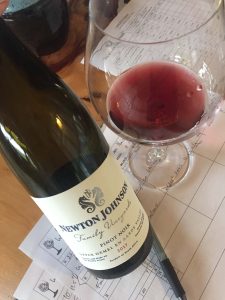 It was soon time to taste 2 of the Pinots Noir, again one each from the top 2 ranges as for the Chardonnay. I preferred the Family Vineyards wine. The Walker Bay Pinot was made from a single block of younger vines (10 years compared with 16 years) grown in lighter, sandy soils. The pale ruby wine was restrained on the nose and palate – I was yearning for more intensity and depth – with simple flavours of slightly smoky, sweet cherry and strawberry. The Family Vineyards wine, from the same 2017 vintage and aged also for 12 months in 25% new oak, was deeper in colour with a better intensity of cherry aroma and flavour with a green herbaceousness instead of a smoky character. It was light rather than elegant in the mouth and needed more power to gain higher marks. 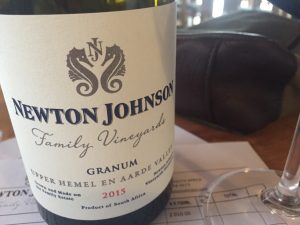 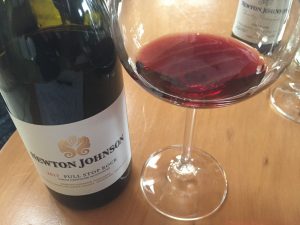 The last 2 red wines I tasted were Syrah-led blends. The Granum was my favourite wine of the tasting. Granum is Latin for ‘granite’ to reflect the rugged, rocky soils that the grapes are grown in at the lower slopes of the farm. Blended with 25% Mourvèdre, the aromas were of better intensity than the Pinots Noir – even though they were competing with strong fish smells from the kitchen – with slightly smoky, savoury notes of light pepper, red to dark fruits and violets. This was another lighter styled wine with good balance between spicy pepper and red fruits on the palate. I rated the Full Stop Rhône style blend, also from rocky, pebbly soils, was made using more Grenache than Mourvèdre than the Granum. The smoky aromas remained but there was less complexity of fruits on the nose. Nonetheless, there was a decent intensity of flavour on the palate with medium tannins giving structure and a light grip to make for a pleasant wine. 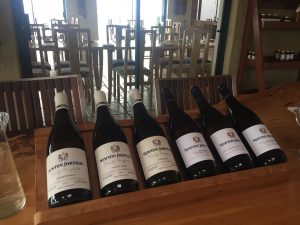 I ended with the delicious Noble Late Harvest. The wine comes from Robertson, Wine of Origin Eilandia (a Ward I had not heard of before) and is called L’Illa. The name is Catalan for ‘island’ to reflect the location in the Breede River Valley. It is made from 40-year old Chenin Blanc vines. It was served cold so the citrus and straw apricot aromas took a while to develop. The palate was much improved with a sweetness of fresh apricot, nectarine and Victoria plum flavours that lingered. 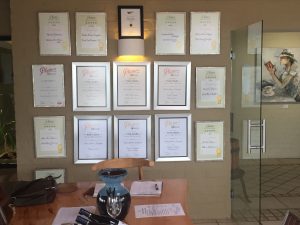 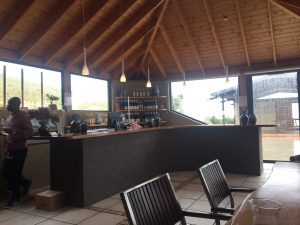 Newton Johnson teased rather than tempted and somehow left me feeling short. I am unsure why. The weather did not help but I can put that aside. It may be that the combination of my anticipation, the legacy of 5* Platter’s Awards, and the wait before visiting was too high. I did not get the ‘wow’ factor that I was expecting. Yes, the wines were decent and well made and it was a joy to taste my first Albariňo. The Granum and the Noble Late Harvest stood out too. You will know, if you read me here regularly, that I objectively rate each wine using the standard 20 point scale (3 for Appearance, 7 for Nose and 10 for Palate) but that I also give a personal ‘Preference’ score to allow subjectivity. I will admit a penchant for red wines with finesse and elegance rather than sheer power but lightness and a deft winemaking touch, however terroir-expressive, is not always enough. I was left wanting more intensity and depth of flavour than many of the wines showed. It may be no coincidence too that the Granum was my favourite red wine given that 2015 was a superb vintage, whilst 2017 showed a freshness with a fine fruit concentration. I shall muse on for longer but meanwhile I shall enjoy opening the wines that I took home with me. 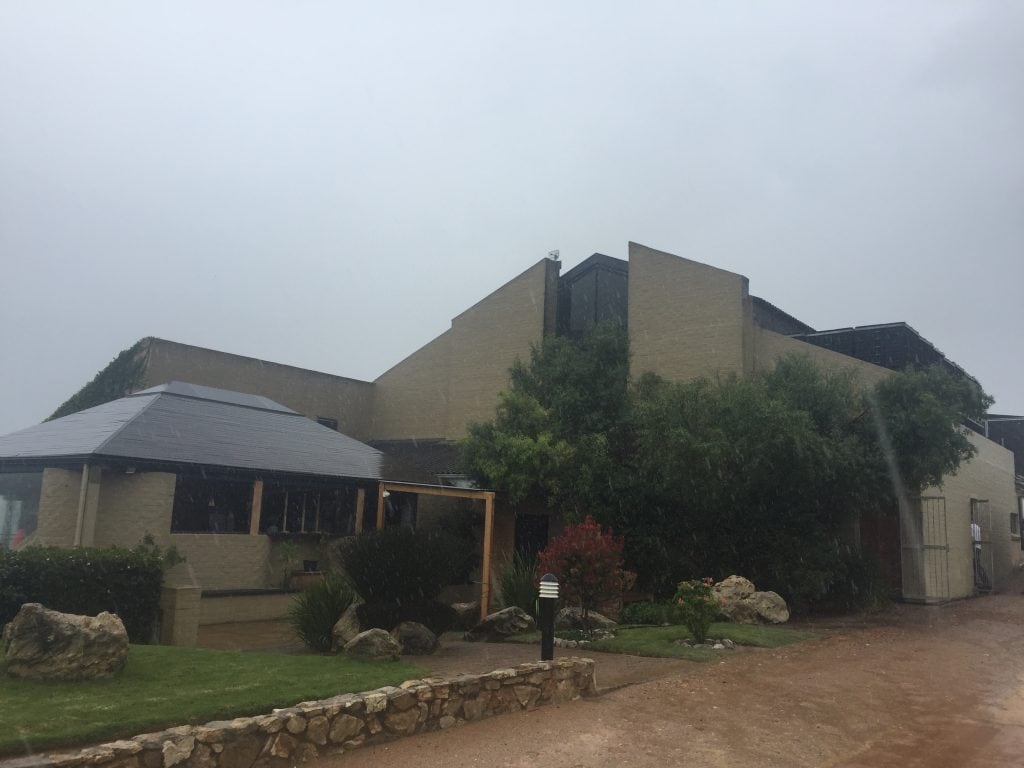