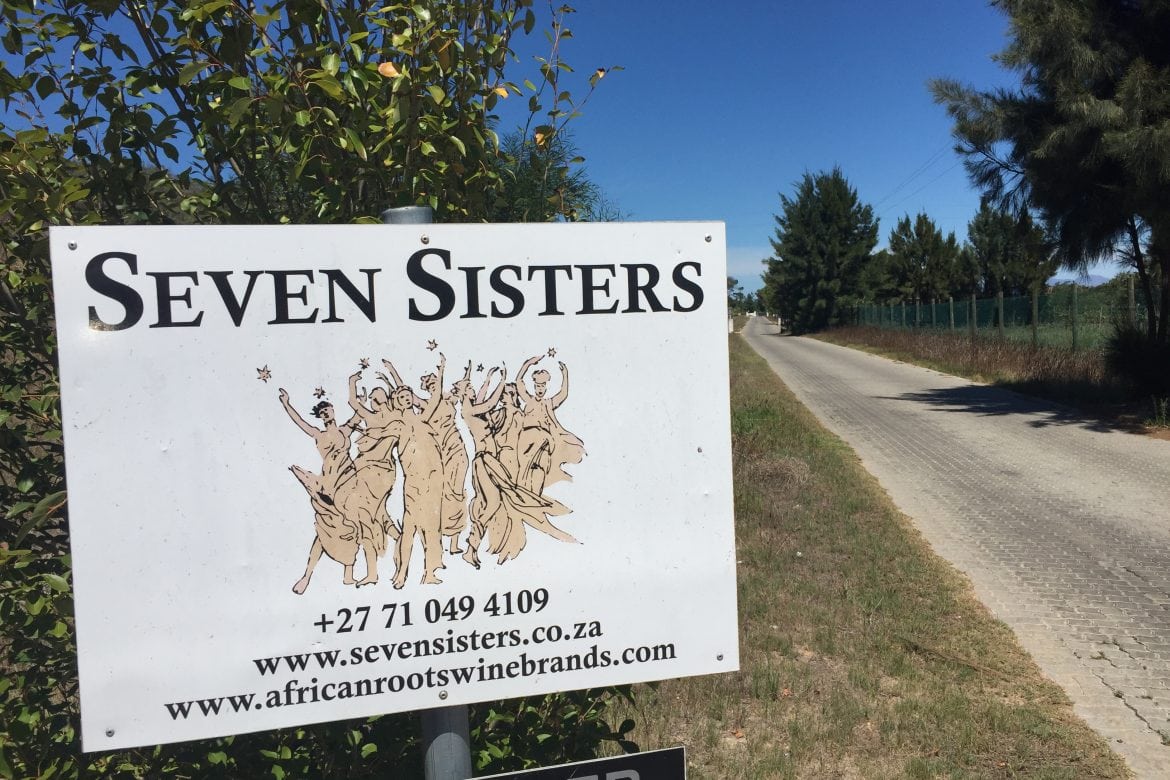 If you had asked me 30 years ago what the Seven Sisters are I would have said that they are a series of 7 chalk cliffs in my native county of East Sussex, England. Today I visited a different Seven Sisters, namely a wine estate South-West of Stellenbosch. I had already visited Vergenoegd Löw and Meerlust further South towards the N2 but, since the Seven Sisters Vineyards was also open for Friday tasting, I decided to pay a visit. 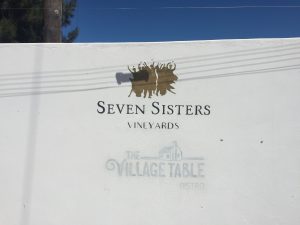 Seven Sisters was easy to find. I turned off the R310 opposite the Zetlers Farm Shop and garage on the corner of Baden Powell Drive and headed East along Annandale Road. The white entrance gate with the vineyard logo, some 500 metres on the right hand side of the road, was well painted. I headed inside to park. It was not so easy to find the Tasting Room and I ended up walking into the office. It mattered little as I was the only guest there and the staff were not so busy. 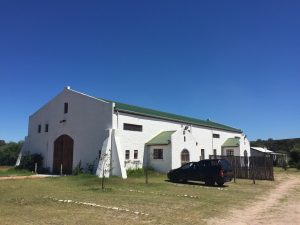 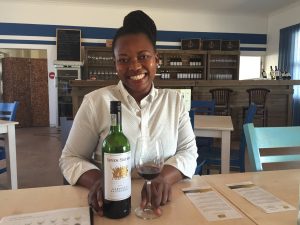 Kay was my attentive host who showed me through to the large Tasting Room that doubles as a restaurant and popular wedding venue. Tasting was R100 for 5 wines. I began with 2 Chardonnay, one each from the Seven Sisters Range and one from the premium Brutus Range. It was good to taste them side by side and to compare. The entry Chardonnay was a deeper straw to pale yellow in colour. It was light in intensity and complexity with aromas of citrus, pear, apple and vanilla. The intensity improved on the refreshing palate that had a smooth texture. 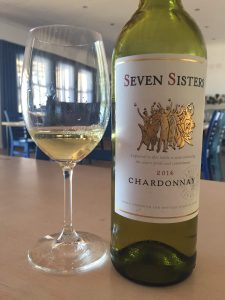 I preferred the Brutus wine that was launched in 2016. Though paler in colour, the delicate nose better balanced fruit and vanilla notes. The palate showed a greater intensity of flavour, a creamy texture and a decent finish. As I tasted, Kay told me the story of the 7 sisters and how the vineyard came about. Her knowledge and confidence impressed even though she had worked at the wine farm for only 3 weeks. 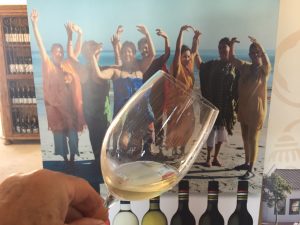 The family of 7 sisters and 1 baby brother come from Paternoster. Their father fell out with the owner and lost his fishing job in the village. Consequently, they were evicted from the factory house with the result that the family was split up between different relatives to be able to live and survive. Twenty years later, in 2005, the Brutus family were reunited. Sister Vivian Kleynhans taught herself about winemaking and the wine business. Seven Sisters Vineyards is the realisation of her dream. 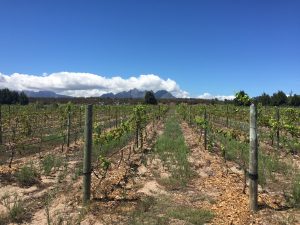 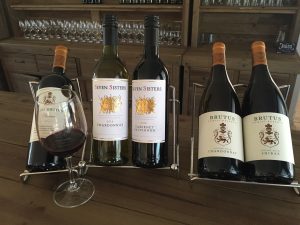 It has taken courage and determination to achieve her goal. Vivian formed the African Roots Wine company 10 years ago. The family bought 9 hectares of barren land in 2009 using a Government grant for unfairly evicted families. Building on the property started in 2011 and took 5 years to complete due to the lack of bank financing. Meanwhile, in 2013, the first Chardonnay (3 hectares) and Shiraz (2 hectares) were planted. 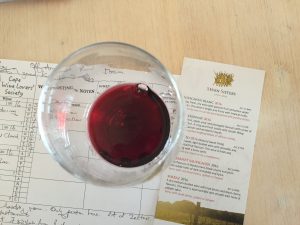 The first red wine of the tasting was a Cabernet Sauvignon. This was a value for money wine and medium-full bodied in character. It showed a sweet intensity of red and dark fruits – plum, cherry, cassis and some spice – on the nose that receded on the palate as oak flavours came to the fore, with a tannic finish. Kay told, as I tasted, how the distinctive gold label showing the 7 sisters was introduced in 2016 as the previous design had not received great reviews. 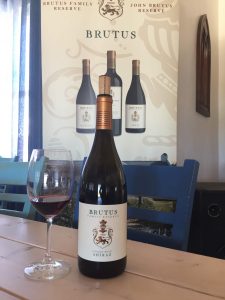 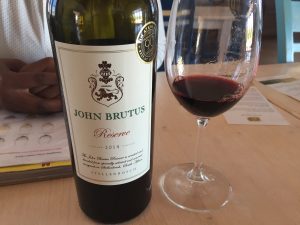 The final 2 wines were from the Brutus Range. The Shiraz showed good black pepper spicy fruits on the nose. Their limited complexity showed on the palate that was medium in weight and with tight tannins. My favourite wine of the tasting was the John Brutus Reserve, named after the only son. It was a Bordeaux-style blend that, unusually, contained Petit Verdot as the majority grape variety. This contributed to the ruby colour, deep intensity and full body that was greater than for the other wines. The power and structure of the Petit Verdot showed on the palate with a smoothness and complexity of plum, cherry, cassis and bramble fruits that came from each of the 4 cultivars. 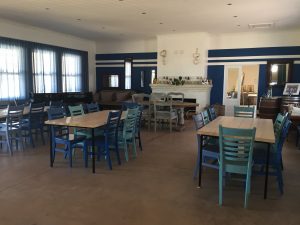 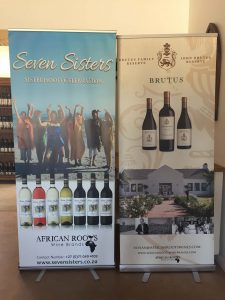 Seven Sisters told a harrowing but fascinating story. It was good to hear it so well explained. This may seem obvious but it is all too often in my experience that even the historic, famous estates often fail to tell their tale. The range of wines showed a good representation of the cultivars. They were priced at the right level for their quality and testament to the struggle and the journey of Vivian and her sisters (brother too). I wish them well. 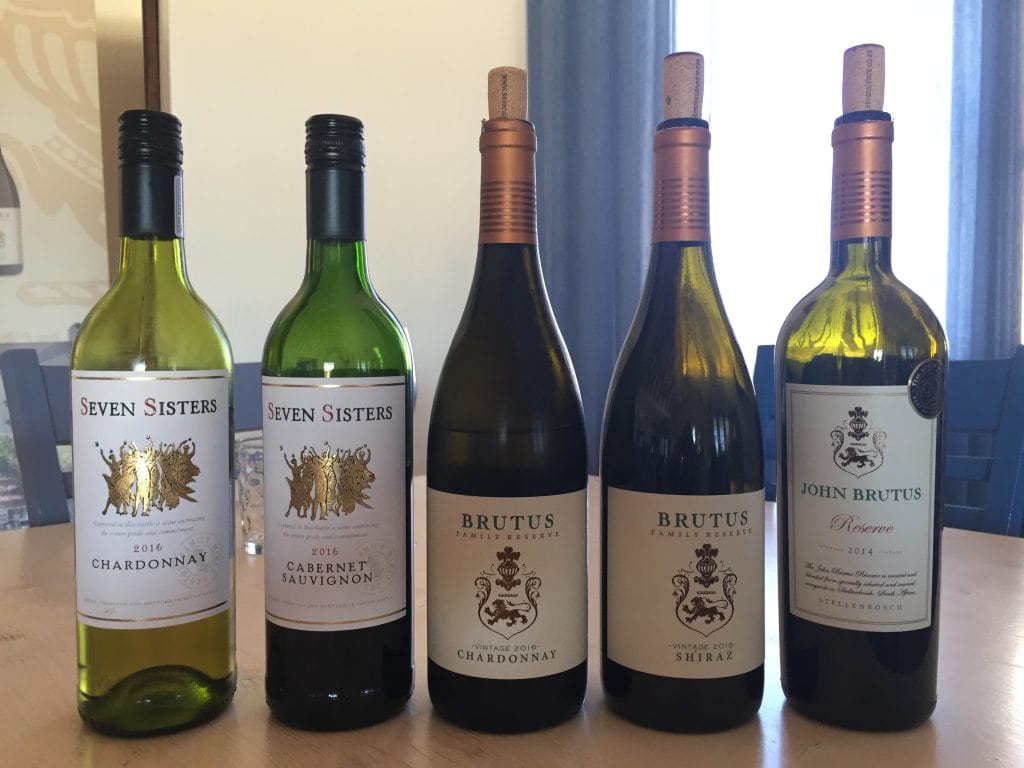