Home/Experience 4.0/Wines Merely to Lust After

Wines Merely to Lust After 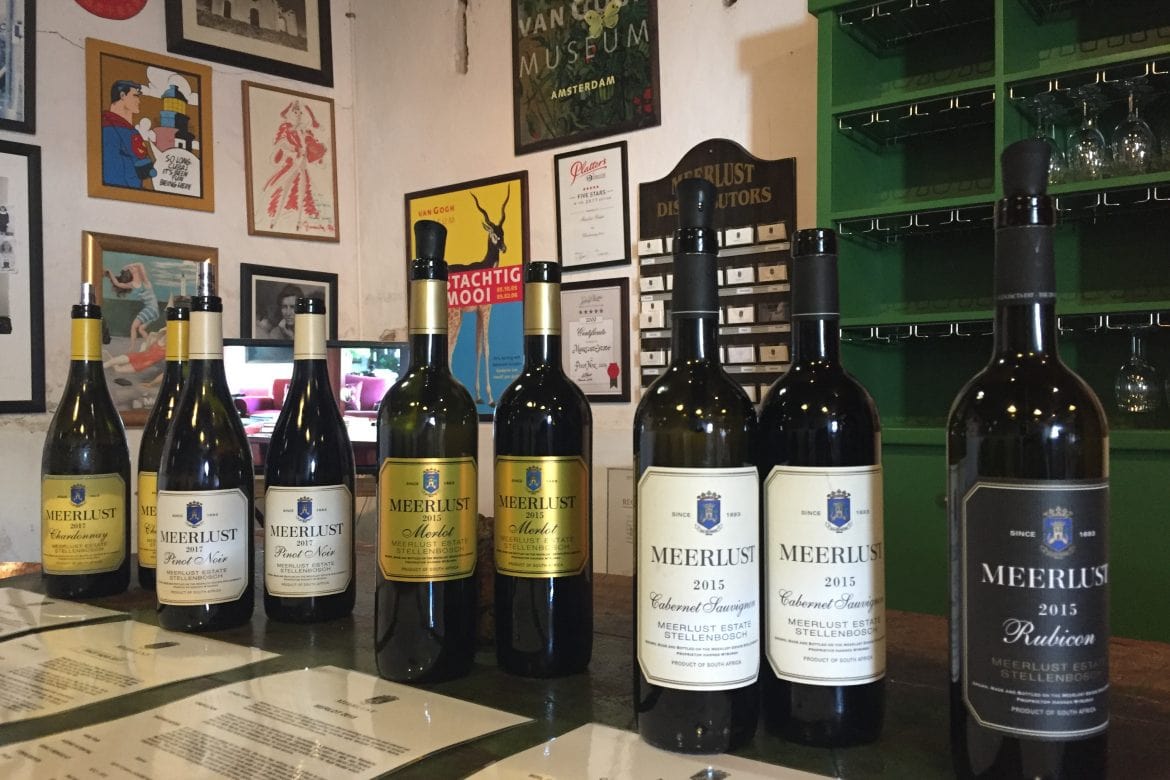 Meerlust is one of those famous, historic South African wine estates that one just has to visit. Today, I was visiting the estates South of Stellenbosch. I had just tasted at the excellent Vergenoegd Löw Estate. Meerlust was barely 5 kilometres to the North and so too good an opportunity not to miss. As I drove down the palm tree-lined approach road, I was surprised I had not tasted at Meerlust before. I parked beside the ancient white-washed farm buildings with their olive green, heritage windows. Outside, the staff cleaned barrels in the sunshine. 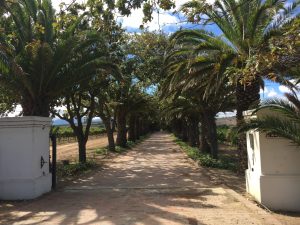 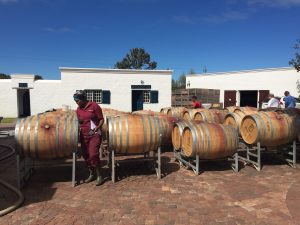 The Tasting Room was simple and unstated – but for the museum poster and other art pictures that personally were collected by the Meerlust owner – though nonetheless welcoming. There was a quiet air of grandeur to complement the serious business of wine tasting. There was no choice of wines to taste here, or numerous collections of entry, premium and reserve wines. Carol, my tasting host, explained that there were 5 wines to taste (R30). Each wine was set out on the low wooded counter and with a laminated Tasting Note beside it. I felt as if I had to whisper such was the silent authority of the wines and ambience. 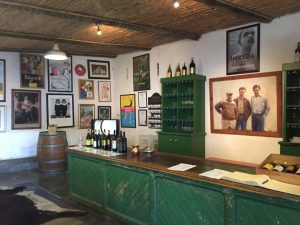 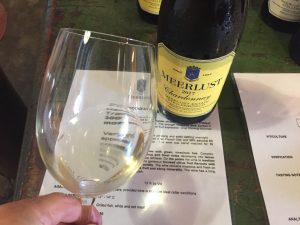 I liked the Chardonnay immediately. Medium yellow in colour yet clear in appearance, the wine showed its quality by an intense and complex nose of sweet baked apple, lemon and vanilla. The oak maturation (10 months in 50% new and used French barrels) showed on the smooth and creamy palate. The balance was excellent with the oak complementing but not over-powering the fruit flavours. 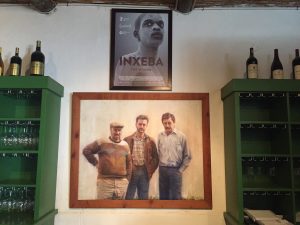 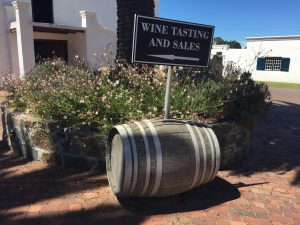 Meerlust has been in the hands of the Myburgh family since it was bought by Johannes Myburgh in 1756. Hannes, the present owner is the 8th generation member. The old photo behind the tasting counter shows him when he was 32 years old, together with his father and the previous winemaker. The estate grows all its vines on 110 hectares of the 400 hectare property. Red wines dominate (90% of production) with all the main varieties planted – Cabernet Sauvignon, Cabernet Franc, Merlot, Petit Verdot, Pinot Noir, together with Chardonnay. 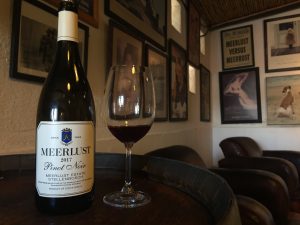 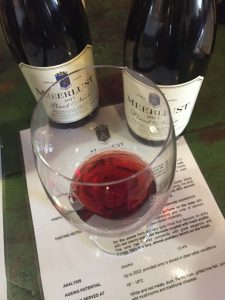 I was surprised to see Pinot Noir on the Tasting Menu, at least until Carol explained that Meerlust lies on a granite outcrop just 5 kilometres from False Bay. The first owner, German immigrant Henning Huising, I learned after, gave the name to Meerlust in 1693. It means ‘pleasure of the sea’. The Pinot Noir was very pale in ruby red colour. It was another well crafted wine with a distinct savoury, meaty nose – I am tempted to call it biltong – that balanced the spicy, bitter sweet cherry and cranberry notes. The weight of the wine on the palate was a light as the colour, almost too lightweight for my preference. 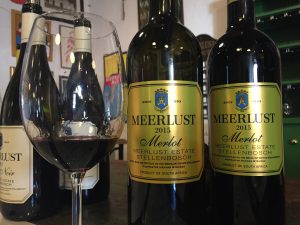 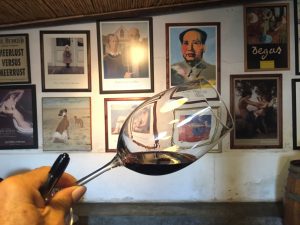 The Merlot was weightier and from one of South Africa’s best recent vintages, 2015. I had to ask for a fresh glass as the smoky Pinot Noir notes were still present. The wine showed warm red plum and cherry fruits and a good acidity. Textured tannins, with the added structure from 15% combined Cabernet Franc and Petit Verdot, were tight but not overly astringent. 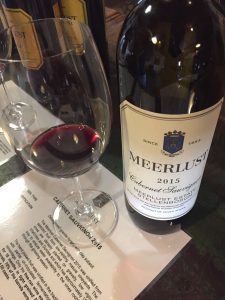 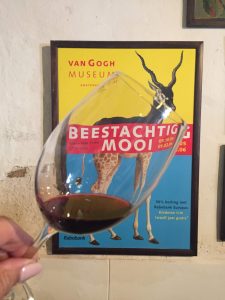 I read later that Nicholas Myburgh, father of the present owner, took over the farm in 1950. He restored much of the Manor House and outbuildings. The wine cellar, which houses the Tasting Room, was built in 1776. It originally was the wagon house for the estate. The Cabernet Sauvignon was another serious wine that showed classic deep-ruby colour, juicy but not jammy, red and dark fruits and a deep structured, intense palate. This is a wine to keep and age. 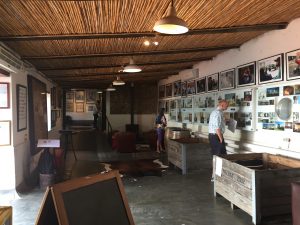 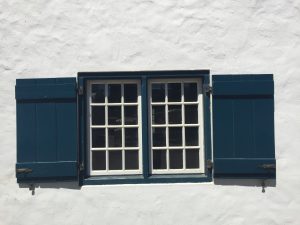 I was joined by a group of foreign tourists and their South African guide for the final wine of the tasting, the iconic Meerlust Rubicon. In conversation, I learned that their leader was none other than Francois ‘Duimpie’ Bayly, one of the first three Cape Wine Masters. The Rubicon is a Bordeaux-style blend. It has been made since 1980, with each year expressing a different character and personality. Julius Caesar is said to have said ‘alea iata est’ or ‘the die is cast’ when with his troops he crossed the River Rubicon on his way to Rome in 49BC. The name Rubicon was given to the first vintage as there was ‘no turning back’ from making a blend from the estate Bordeaux cultivars, used at the time primarily to make single variety wines. 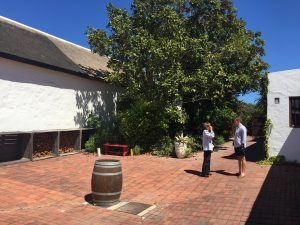 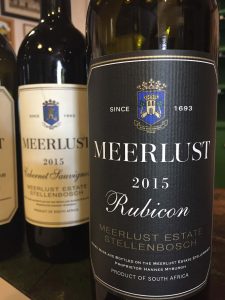 The Rubicon was my favourite wine of the tasting. Similar in appearance to the Cabernet Sauvignon that makes up nearly 2/3 of the blend, the wine had a brooding intensity of complex redcurrant, cassis, plum and bramble fruit flavours. These seamlessly followed through to the palate that showed depth and a smooth intensity. It was very drinkable now but will improve further if aged for another 15 to 30 years. 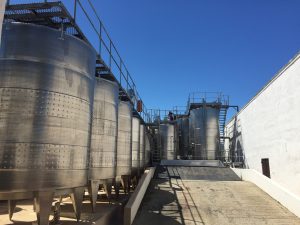 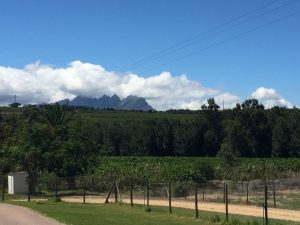 The tasting was short and sweet. The Meerlust wines showed their class and were of obvious quality, as the estate’s reputation for excellence suggests. After, I was disappointed to find out so much more about this historic estate that I would have enjoyed learning about whilst tasting. Meerlust is not alone in this and I am slightly at a loss to wonder why. I am sure the American tourists with Duimpie, who adore anything of age, would have been fascinated to know the story behind the Rubicon and more of the estate’s history. This was not why I did not buy any wines at this tasting. The wines were expensive compared to many adjacent estates, with prices starting at R250 per bottle (a bargain for the American tourists) but priced at a level consistent with their quality (all are 2019 Platter’s Guide 4½ star wines). 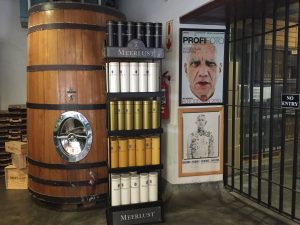 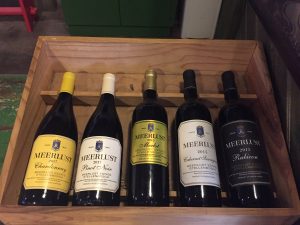 For the moment, at least, I shall just have to lust after them … 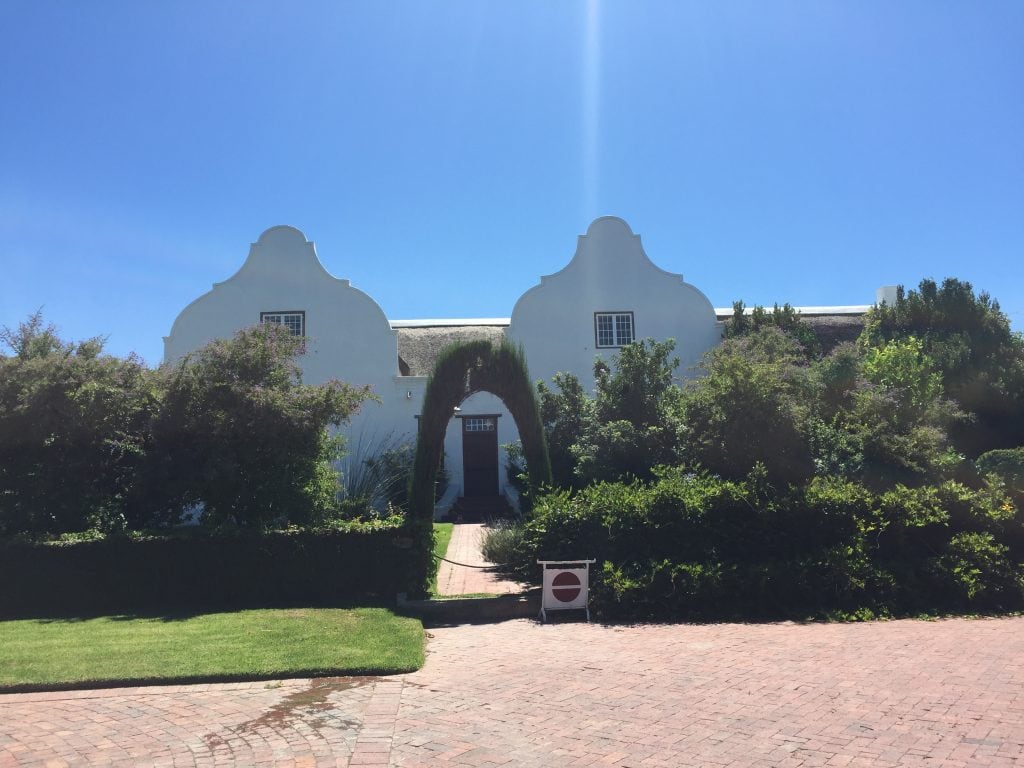