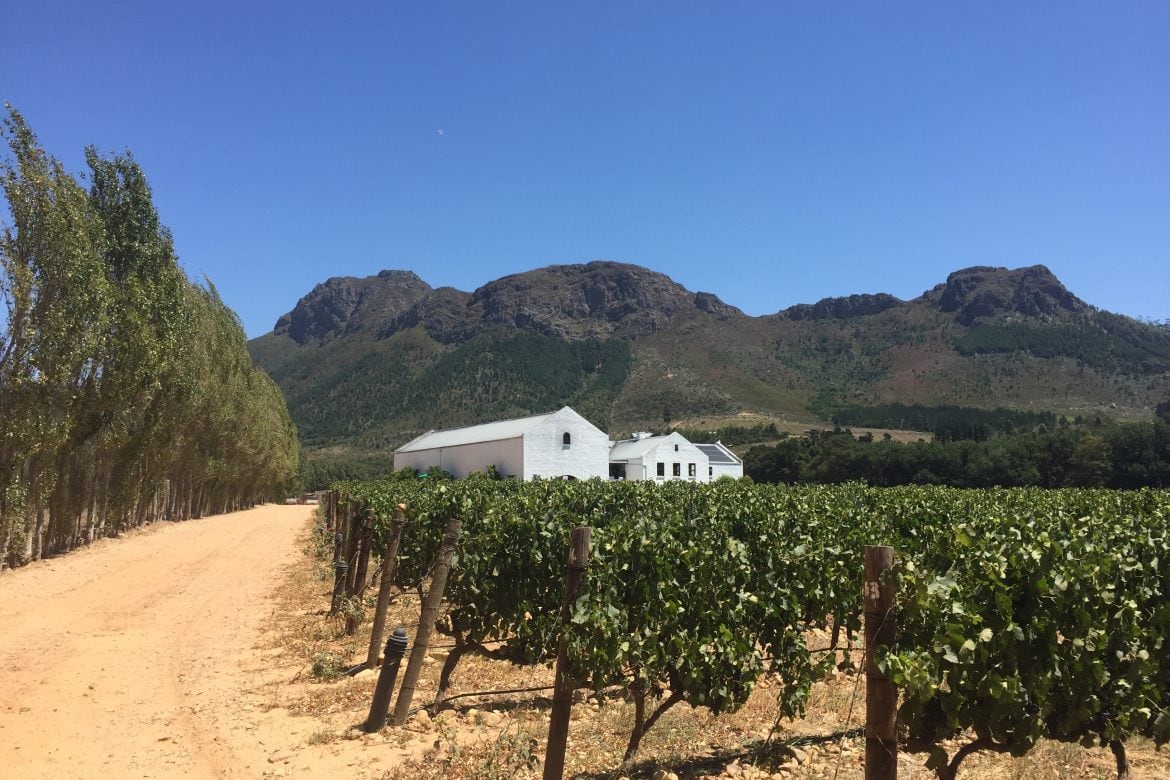 My business at the Cape Chamonix wine estate in Franschhoek ended at lunchtime and so I decided to visit a couple of wine farms for tasting before returning to Cape Town. Holden Manz was recommended. I was eager to see the estate as I had sampled some of their excellent high end Cabernet Francs at the annual Cabernet Franc Carnival but nothing more. 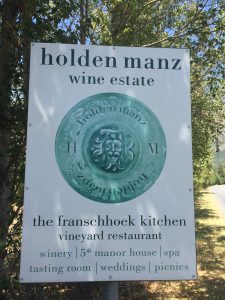 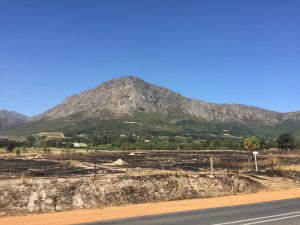 The estate was easy to find, being well signposted off the Green Valley Road, South of Franschhoek. Security at the gate was impressive as befitting a 5-star Country House hotel, spa and wedding venue, home also to the Franschhoek Kitchen restaurant. The entrance guard was as efficient as he was polite, asking me to enter my name onto a palm-top device that read my licence disc. The dusty road led through hot vineyards. I soon saw why Holden Manz brands itself as ‘Franschhoek’s hidden gem’, as just the rooftops of the white buildings showed above vines laden with their dark ripe grapes ready soon for harvest. 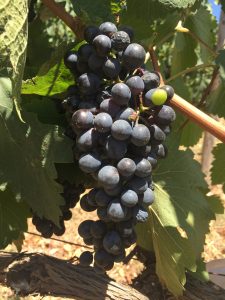 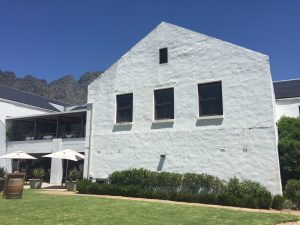 The indoors/outdoors Tasting Room across the lawn was set with outdoor seating and a pool to invite for an intimate tasting setting. A range of tasting options were offered: Gold (R80 for 4 wines); Platinum (R100 for 6 wines); Diamond (R120 for 7 wines) and Reserve (R200 for the 4 Reserve wines). Holden Manz is at the end of the Yellow, Green, Red and Blue lines of the Franschhoek Wine Tram. Visitors arriving by tram gain a 20% discount on the tasting fee. I selected the Platinum Tasting and was pleased that Paul was my tasting host. Being WSET Level 3 qualified – an unusually high qualification for a Tasting Room host – we had much in common as fellow wine students. 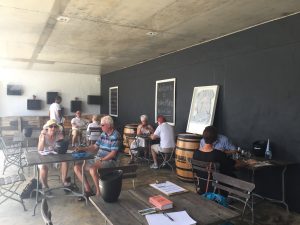 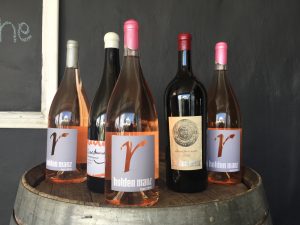 The first wine of the tasting, a Grenache-led Rosé, was one of my favourites. It was one of those delicate pink colours that are so hard to describe, a mix of oeil-de-perdrix and pale onion skin. The wine was served at just the right temperature. Paul explained how Rosé was the first wine made by the Holden Manz winemaker, at the age of 14 years old in Corsica. Delicate but intense, refreshing aromas of strawberry and wild raspberry matched the delicate colour. The wine was dry and crisp on the palate. I decided there and then to buy a bottle. 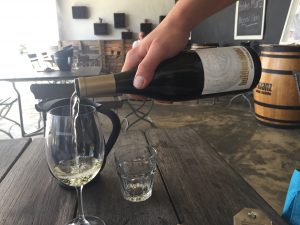 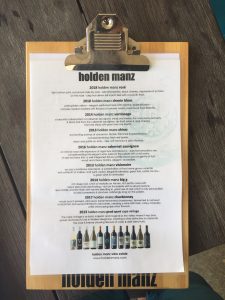 Two white wines followed, both of which were well balanced and well made. The natural fermented, old bush vine Chenin Blanc was everything a Chenin should be. The grapes are brought in from a farm between Paarl and Stellenbosch, before being lightly pressed and 20% barrel fermented. The result was a wine with obvious fruity aromas of good intensity and complexity: white honey, floral honeysuckle, sweet apple, guava and green pineapple. The palate was lighter than I expected, with a delicate creamy mouth feel, but grew on the finish. 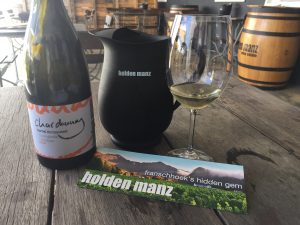 I preferred, just, the barrel-fermented Chardonnay from the Avant-Garde collection. The white wax cap was unusual for a Chardonnay but the wine showed classic baked apple, lemon, vanilla and fresh dough on the nose. The creamy, silky texture on the palate was refined and moreish, whilst the balance between fruit and oak was excellent. 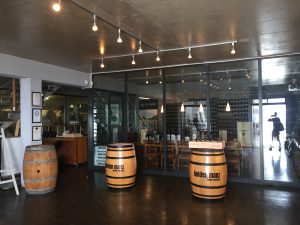 The ‘hidden gem’ ethos, though not espoused by the wines, follows through to the brochure and website. There’s tantalisingly little about the history or background of the estate. Fortunately, the Platter’s Wine Guide offers a little more. Sixteen hectares of the 22 hectare property, owned by Gerard Holden and Migo Manz, are under vine. Red cultivars are mostly grown – Cabernets Sauvignon and Franc, together with Merlot and Shiraz – and thus 85% of wines produced are red, the rest being white, Rosé and Cape port. 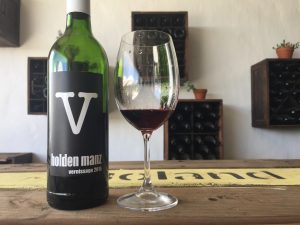 I was excited to sample the red wines. Vernissage is French for ‘the preview of an art exhibition before formal opening’, originally meaning ‘varnishing’. It was the name too of the next wine that was also from the Avant-Garde collection, complete with distinct simple label. Holden Manz has an art gallery too but there were no notes of varnish in this wine. Made in lighter style with almost equal amounts of Franschhoek-grown Cabernet Sauvignon, Shiraz and Merlot, the wine offered a nod to a visit by the owners to Australia (the French appellation rules would never allow such a blend combination). Each cultivar contributed to make an excellent value-for-money entry wine: Shiraz, a spicy, fruity nose that dominated; Cabernet Sauvignon, a tight tannic structure; and Merlot, cherry flavours and a rounded texture. 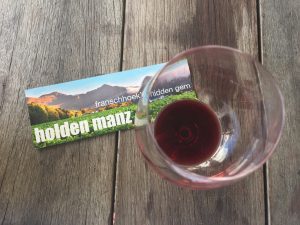 The second red wine was single cultivar Cabernet Sauvignon at double the price. This was a classic South African Cabernet Sauvignon. Full bodied and medium ruby in colour, the wine oozed juicy fruits on the nose with aromas of red berries, redcurrant, cassis, bramble, mulberry and liquorice. The palate showed high acidity with tight youthful tannins. I liked the freshness of the wine but R200 seemed a little over-pricey. 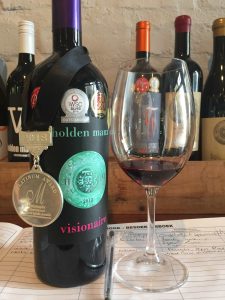 I rated the similarly-named Visionaire the same. The tasting note described the wine as a ‘spicy Bordeaux blend’. It was spot on. The Visionaire is made from the 5 Bordeaux grapes together with 20% Shiraz. The wine was more ruby in colour and spicier on the nose than the Vernissage, due to the greater proportion of Merlot and hot peppery Shiraz, respectively. The Merlot gave the Visionaire a Right Bank feel to a wine made in like style as the other reds tasted so far. 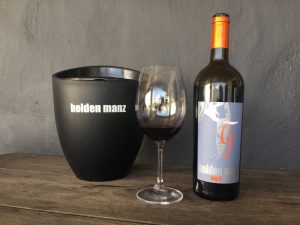 The Big G was much better and my favourite wine of the tasting, albeit the Rosé was close behind. Made without Shiraz and using the 3 primary Bordeaux grapes, this Cabernet Sauvignon-led wine (51%) tasted Left Bank in character. The fruit-dominated style with aromas of red and dark fruits – plum, cherry, blackcurrant, dark chocolate and bitter orange – meant that the Big G could never be mistaken for an Old World wine. I liked the depth of fruitiness that followed through to a full palate with a rich texture, weight and an extended finish. This is a wine that will last and deserves keeping for at least 10 years fully to mature. 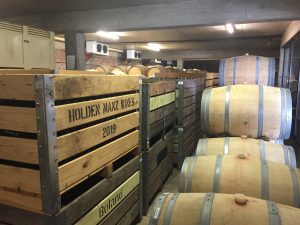 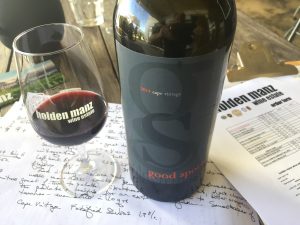 I misread Cape Vintage for Cape Blend alongside Good Sport on the Tasting Sheet, so was surprised when Paul poured the final wine in a port glass. It was nonetheless a pleasant surprise and a nice wine to end the tasting. The dessert wine showed obvious Port character with a deep intensity of ruby purple colour and high alcohol (19%) on the nose. I liked how the Shiraz spiciness and dark-berry fruitiness balanced the sweetness and softness on the palate. 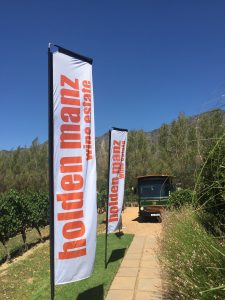 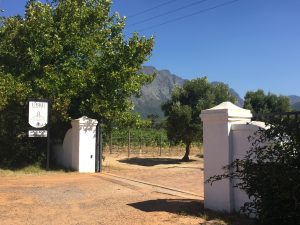 I much enjoyed my first tasting visit to Holden Manz and the opportunity to taste more than the Cabernets Franc that I have tasted at festivals. The wines were well-made and well-served, albeit the pace of the tasting was uneven due to the repeat influx of Wine Tram guests who are on a very tight time schedule. Each wine was served at the right temperature too. Sadly, this is not a given in my experience even when the afternoon ‘room’ temperature was 29°C. I left clutching a bottle of the Rosé with a vague feeling that I had tasted some decent wines but learned little about the estate. This was confirmed when I researched the website and elsewhere for this review. I am thus left with that sense that Holden Manz shows that slight arrogance that says ‘I know I am good but you have to find me’. A gem hidden indeed! 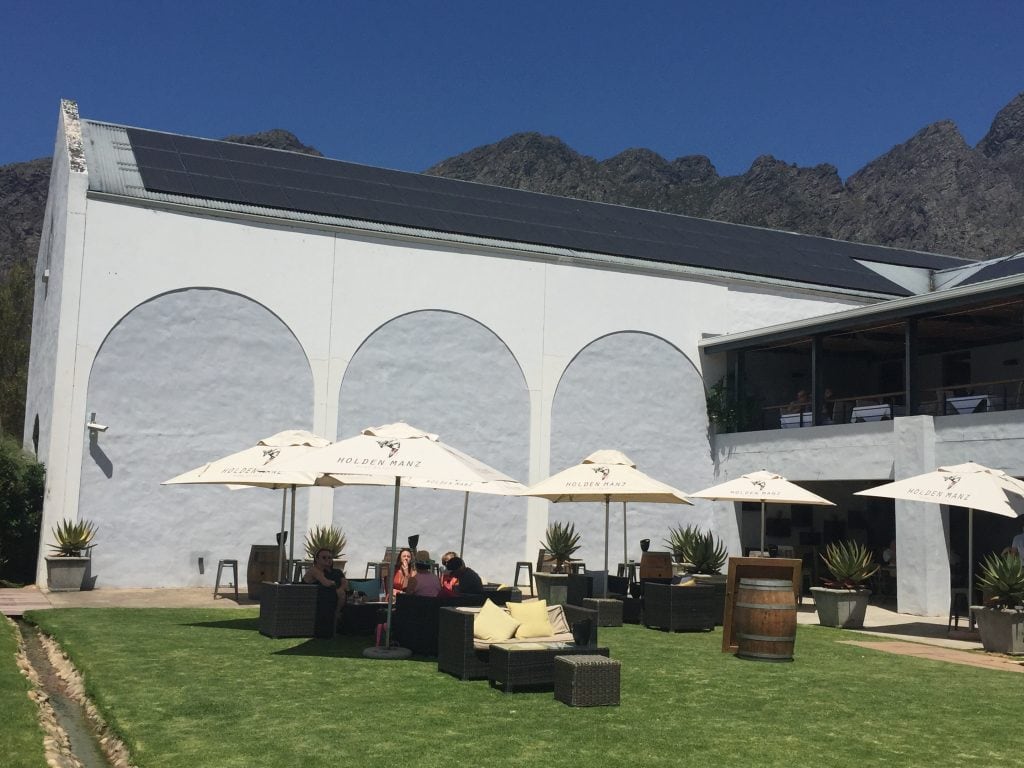