Speed Tasting with Sommelier ‘Royalty’ at my First SASA Meeting 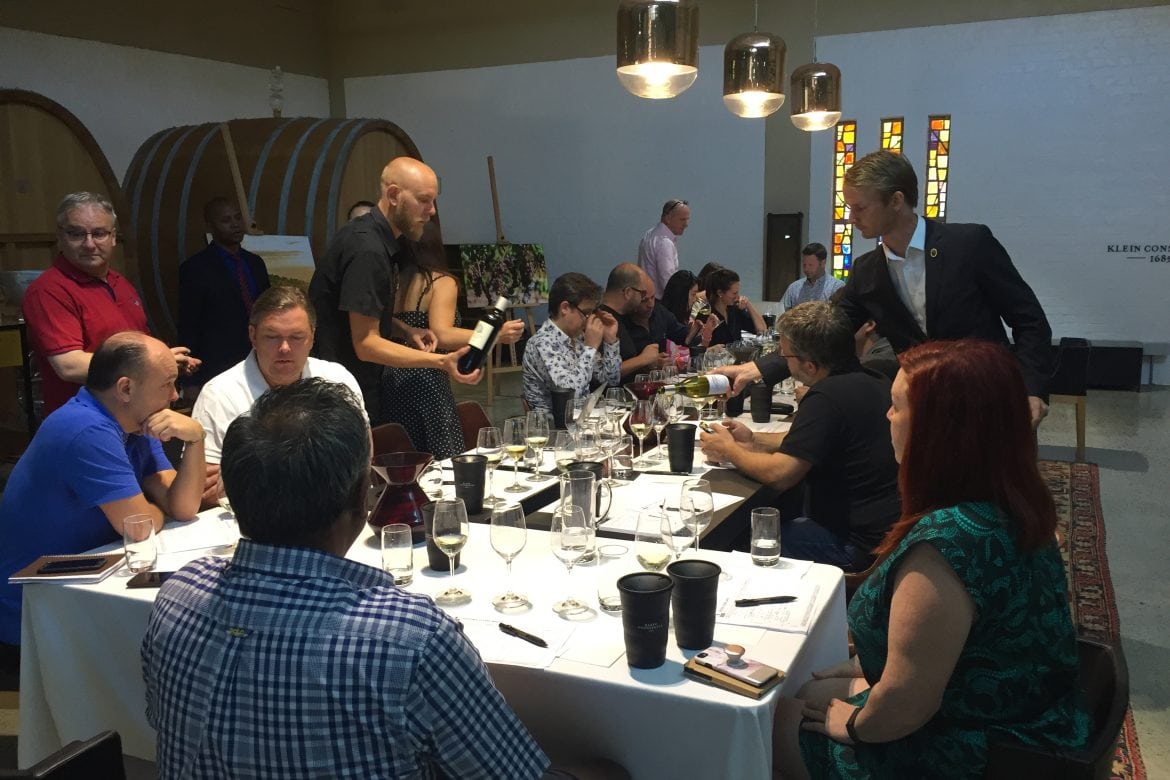 The number of educational providers, let alone wine-tastings, in and around Cape Town is overwhelming at the best of times. The busy harvest period does not seem to lessen them either. I have long considered the pros and cons of the South African-based Cape Wine Academy versus the international Wine & Spirits Education Trust (usually known by its abbreviation, WSET) for formal wine education and learning. Hitherto, I have chosen the former for a combination of reasons and, not least because I am unlikely ever to work overseas. Thus, I am very grateful for the break in teaching until the start of Module 4, my final Diploma Module that resumes in mid-April. 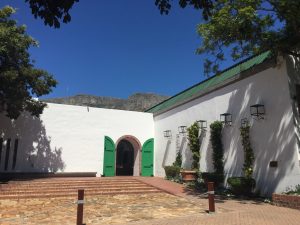 The sommelier world offers further opportunity, albeit I have yet to decipher the intricate differences between the South African Sommelier Association (SASA), Somm and Somm101. I have previously considered joining SASA as a precursor to study for Cape Wine Master. Now is the time to do so. Moreover, the R300 annual fee for professional membership is excellent value for money. Membership includes inter alia a Newsletter, monthly wine-tasting seminars/wine workshops, guest lectures, discounted entry to annual wine events, and industry training seminars.

The event that prompted – indeed, hastened – joining the SASA was their hosting of the Association de la Sommelliere International Technical Committee in Cape Town, ahead of the World Best Sommelier contest in Belgium in March. The tasting was one of a series that had been arranged for past ‘Best Sommelier in the World’ winners – Serge Dubs (1989), Marcus del Moneho (1998), Olivier Poussier (2000), Andreas Larsson (2007) and Arvid Rosengreen (current holder) – to showcase them selected South African wines. 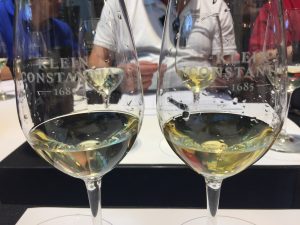 The event proved popular and was fully booked ahead of the tasting. It was 11.00 on a Monday morning – an unusual time for tasting – when I joined some 20 wine enthusiasts around a busy tasting table set out in the elegant cellar at Klein Constantia. World winners they may have been but this was ‘Africa time’ as the start passed almost without notice, as SASA Board and ordinary members slowly arrived. It was well after 11.30 that the exalted guests arrived without so much as a formal welcome or introduction beyond personal greeting. I shall have to up my networking at future meetings. 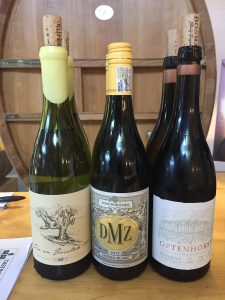 The newly-elected SASA Chairman introduced the tasting by explaining that each flight would be introduced by a different Board Member. First up was Wave, who showcased 3 very different Old Vine Chenins Blanc, each one from a different area. The first wine, and my favourite, was from L’Ormarins in ‘lean Perdeberg style’ (yet bold with intense honeyed citrus notes) made from vines that were originally planted in Perdeberg in 1964 but (unusually) uprooted and moved to Franschhoek in 2007. A classic De Morgenzon DMZ Chenin Blanc was next to showcase a classic bush vine (1972) example. The final Chenin Blanc of the flight was from the Bosman Family Vineyards in Wellington and made from the third oldest Chenin vines in the country. 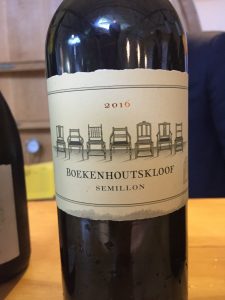 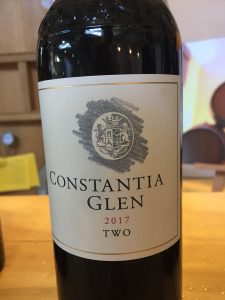 Fast on Wave’s heels was Esme who introduced 3 Sémillon, a cultivar once widely popular in South Africa but now planted in just over 1% of vineyards by area. Both wines showed quality and class: the Boekenhoutskloof wine made from vines dating back from 1942 to 1902 that showed sweet wooded lemon citrus notes with good intensity. There was also one from Arcangeli in the Cape South Coast region that was made with minimal intervention. The final wine was a Constantia Glen Bordeaux-style blend (32% Sémillon) that picked out much of the grassy, green character and the high acidity of its majority Sauvignon Blanc partner. 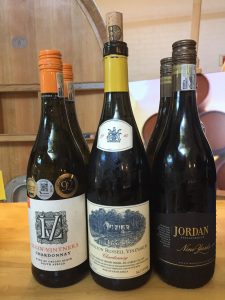 Chardonnay is one of the world’s most widely planted grapes. The cultivar, as Dixon explained, takes on the terroir from where it is grown. The Elgin Vintners example showed enticing creamy, baked apple fruity flavours but was too oak forwards for my preference. I much preferred the complex, precise and well made Chardonnay from Hamilton Russell with its cleaner style and greater complexity. Jordan’s Nine Yards also showed good intensity and a clean mouth feel, together with lively acidity, being made in a more Burgundian style. 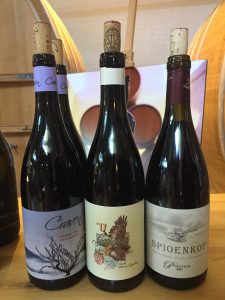 I barely had time to complete my notes when the next flight beckoned, a mixed flight of reds introduced by David: 2 Cinsault and a Pinotage. The Craven and Van Loggerenberg wines were quite different. I had barely assessed their colour when I overheard the French Sommelier opposite me correctly making the observation that the first was made using de-stemmed grapes whilst the second was fermented using whole bunch grapes! Both wines were fresh in character, being of 2017 vintage, but the first showed a cherry bitterness and light mouth feel compared to the riper, sweet-sour and more complex, softer second wine. The Spioenkop Pinotage than ended the flight showed ripe plum fruitiness and a lighter style but was, in my consideration, hugely overpriced at R400. 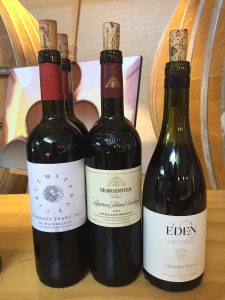 The second last flight consisted of Cabernet Franc and Cabernet Franc blends. Barry waxed lyrical on the difference between those made by Waterkloof and by Morgenster, barely 5 kilometres apart from each other due to the different aspect and microclimate of the 2 estate vineyards. I preferred the fresher, tight, clean cherry wine from Waterkloof to the fuller bodied, riper, fruitier Morgenster Cabernet Franc. The most expensive wine of the tasting – the Raats Family Wine example at a mouth-watering price of R1800 per bottle – was superb. It showed its quality, being rich, intense, smooth, integrated and well balanced with complexity and a long finish, but I was left wondering whether I would buy 10 bottles of the Waterkloof wine instead. 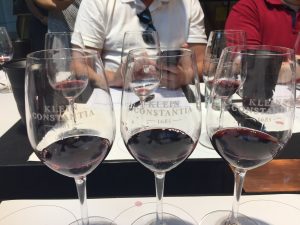 Last up was Higgo’s selection to show New World interpretations of Shiraz, made in Rhône style blends in differing cultivar proportions. My favourite, indeed my favourite wine of the tasting, was the Sadie Family Columella from the Swartland. Drought conditions produced concentrated berry flavours full of ripe intensity that were smooth on the palate. The wine put the Chocolate Block offering made by volume producer Boekenhoutskloof in the shade, even though it was a Platter 5* wine. It was too full bodied with bitter-sweet dark chocolate and coffee notes of plum and cherry for a Rhône style blend, which I would associate with being lighter in character. The final wine, a more classic SMV blend from boutique Bellingham, showed juicier, riper fruits with good intensity.

The tasting ended almost as soon as it has begun. I recall my Diploma-student friend Shon commenting ‘18 wines in 110 minutes’ such was the speed of the tasting. The point was well made. One lesson I have yet to learn is to analyse and write quickly, certainly if the pace of the tasting was typical for a SASA meeting. Nonetheless, I thoroughly enjoyed the exalted company and the excellent tasting of a diverse range of South African white and red wines. I cannot wait for the next SASA meeting to broaden my tasting experience and knowledge. I just hope there’s a little more time to savour the wines! 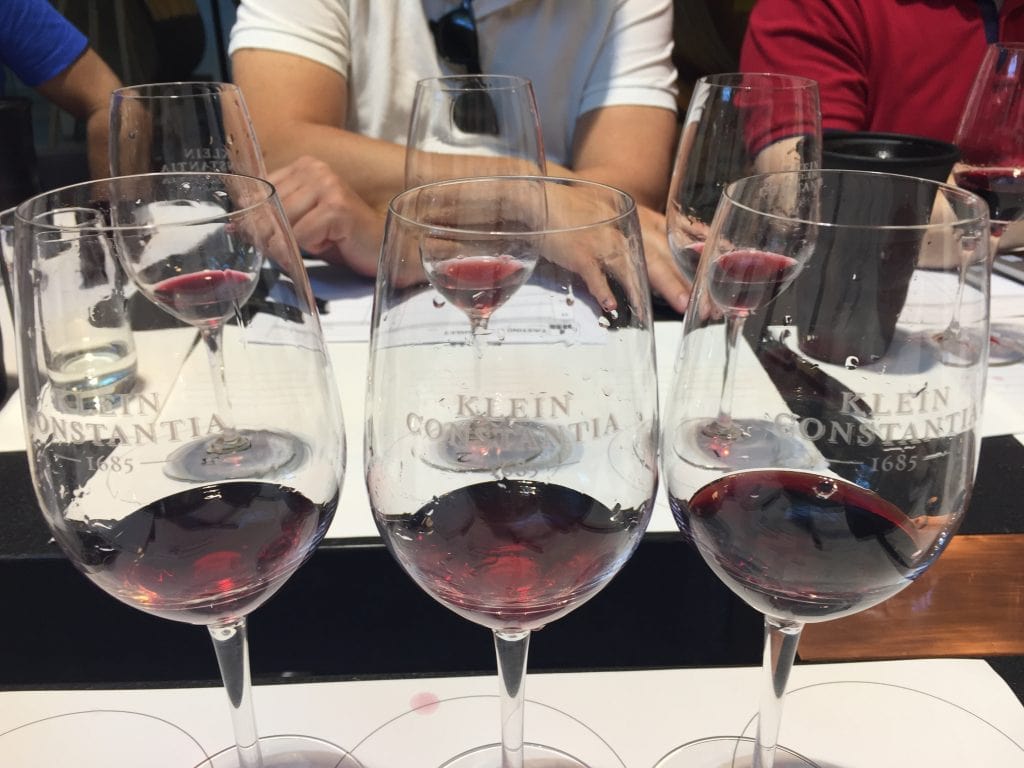