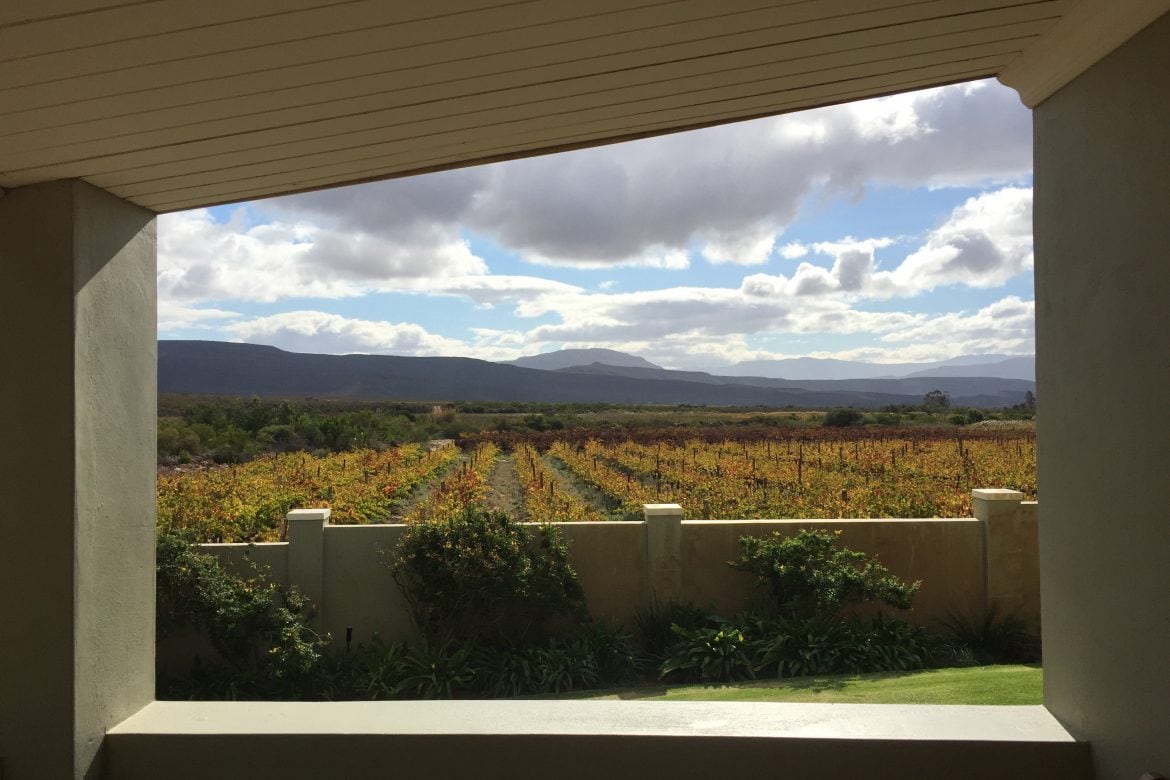 Windfall is about as far from Robertson as one can get during the Wacky Wine Weekend, some 30 kilometres South West and along the scenic Agterkliphoogte Valley. The journey was less for me as I had stayed overnight at McGregor and visited Wandsbeck beforehand. The final approach was down a dirt road and past a brightly painted farm. As I stopped to take a photo with fluffy cumulus clouds filling the blue sky, a local in a bakkie asked if I needed help. People are friendly here, or perhaps just inquisitive. 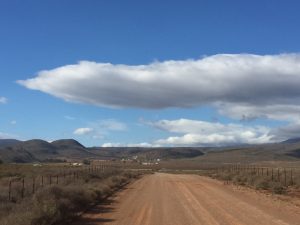 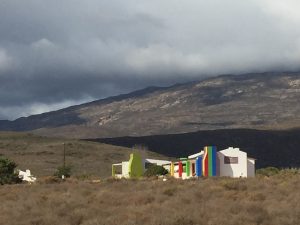 Windfall is usually open only by appointment and so it was a good opportunity to visit during the festival weekend. It was the busy Saturday too and so I reckoned it was a good place to taste away from the drinking crowds. The winery was easy to find by the broad tan entrance that led to a tidy outbuildings and a beautiful house with manicured gardens and superb views over the vineyards and mountains beyond. 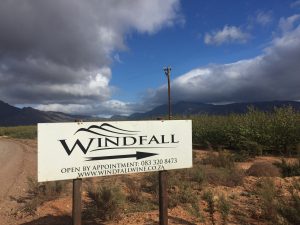 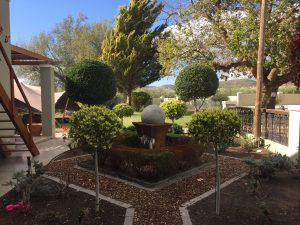 Ask me what a windfall is and I would have answered a fallen apple in an orchard in the autumn. I well remember picking up the slightly bruised, large Bramley cooking apples at home when a child to make apple crumble. The word is also used to describe a sudden, unexpected win or received sum of money. South African cricketer Eddie Barlow gave the 300 hectare property its Windfall name as he noticed how the mists cascaded down the surrounding mountains. 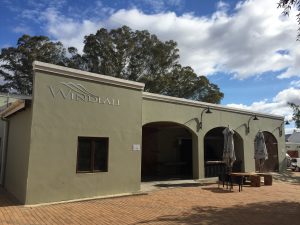 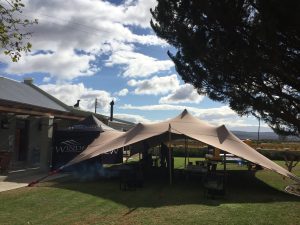 The farm used to be called Spesbona until Barlow bought it and the name remained after he sold it to property developer Robert Alexander who renovated the dams and replanted the vineyards. Take a look at the wine label and the windfall logo remains. Today, 63 hectares of mostly red vines are planted (75% of production) that includes Cabernet Sauvignon, Merlot, Pinotage, Pinot Noir, Ruby Cabernet, Chardonnay, Chenin Blanc and Sauvignon Blanc. 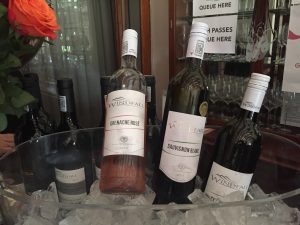 The broad range of grapes is reflected in a small but comprehensive range of wines that were available for tasting: white, rosé, red and brandy (though I did not sample the latter as I was driving). Daughter Bianca served the wines. The Sauvignon Blanc was a classic watery, pale, greenish straw in colour with pleasant but restrained herbaceous and tropical fruity aromas. The wine was refreshing and clean on the palate with a bright acidity.The Chenin Blanc was similar in shy character but less typical of the cultivar. Restrained notes of aromatic lemon and lime citrus filled the nose but there were none of the sweeter honeyed fruits that I would have expected. The medium acidity made for an approachable wine. 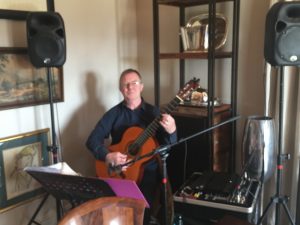 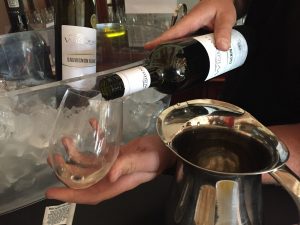 Meanwhile, the beautifully decorated family living room, with in-built bar that became the tasting counter, was filling up. My fellow drinkers were more mature in age than the customary festival drinker and there was a pleasant family atmosphere. A classical guitarist playing Spanish music and the superb views over the vineyards beyond the garden added to the relaxed tasting. 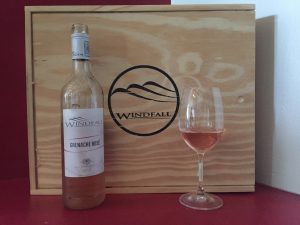 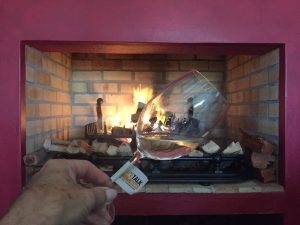 I was starting to see a pattern to winemaker Kobus van der Merve’s shy style. The pale salmon Rosé offered light strawberry aromas and medium acidity. The wine was lightweight on the palate too with just 10.5% alcohol. This was for easy drinking but I wanted more weight and intensity. 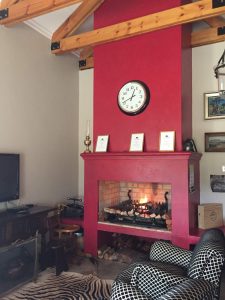 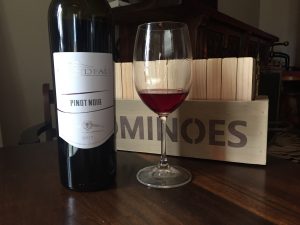 I much preferred the red wines. The Pinot Noir showed better intensity on the nose with forward aromas of red cherry, cranberry and some white pepper spice. The wine was well balanced on the palate with above average acidity matching the fruit flavours and soft tannins. 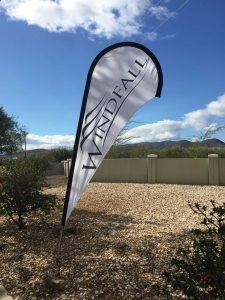 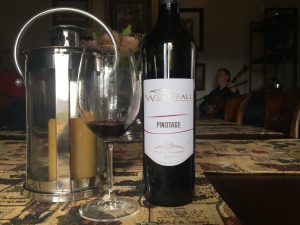 Pinotage is not one of my favourite cultivars but the Windfall wine offered good value for money at R100. The fruity aromas were more intense than those of the Pinot Noir with fresh red plum, cherry, light banana and spices notes following through to a dry, tannic palate with medium length. The tannins were olive and grippy without being bitter for a lighter style of Pinotage. 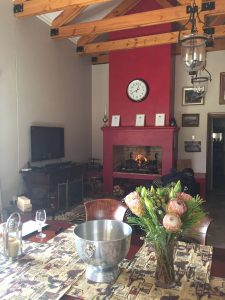 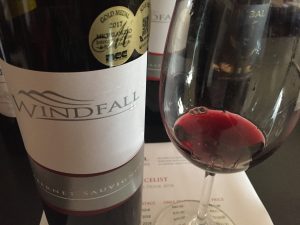 I rated the Cabernet Sauvignon and the Shiraz equally though just preferred the Shiraz. Both wines were full bodied and ruby purple in colour. The Cabernet Sauvignon benefitted from not being over-oaked that allowed the warm mulberry and bramble fruits, with fynbos aromas, to fill the glass. Medium tannins were similar to those of the Pinotage to make for an approachable wine that could be drunk alone or with food. 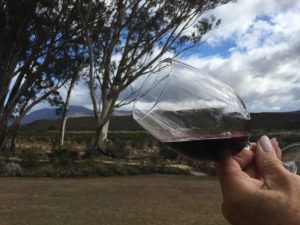 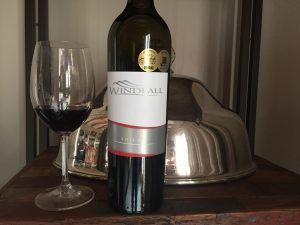 Spicy peppercorns led fruity berry aromas and flavours for the Shiraz that well matched the rounded, integrated tannins and 13.5% alcohol. The wine benefitted from the older (2014) vintage and will further improve with ageing. 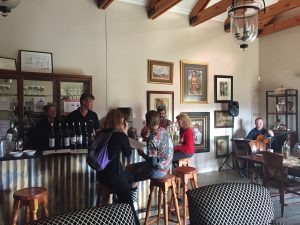 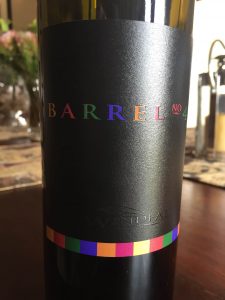 I ended with the flagship Barrel #41 that was a Rhône ‘SMG’ blend in striking black label with brightly coloured letters pattern. Full bodied and medium ruby in colour with a purple tinge, the nose balanced red and dark fruits with a hint of spice. The wine was smooth on the palate though not quite as rounded or lengthy at the finish as the Shiraz. 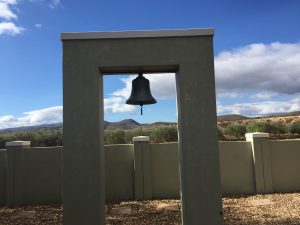 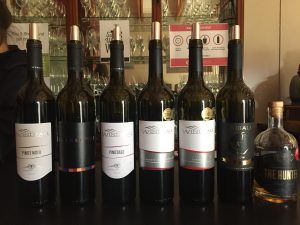 I thoroughly enjoyed my tasting at Windfall. The setting was lovely and the wines authentic, decent and well priced. I preferred the red wines to the whites and the Rosé due to their greater complexity and intensity. Windfall offered an honest and welcoming experience and I well worth making an appointment to taste at if ever you are nearby.