A Lekker Jol at Wandsbeck 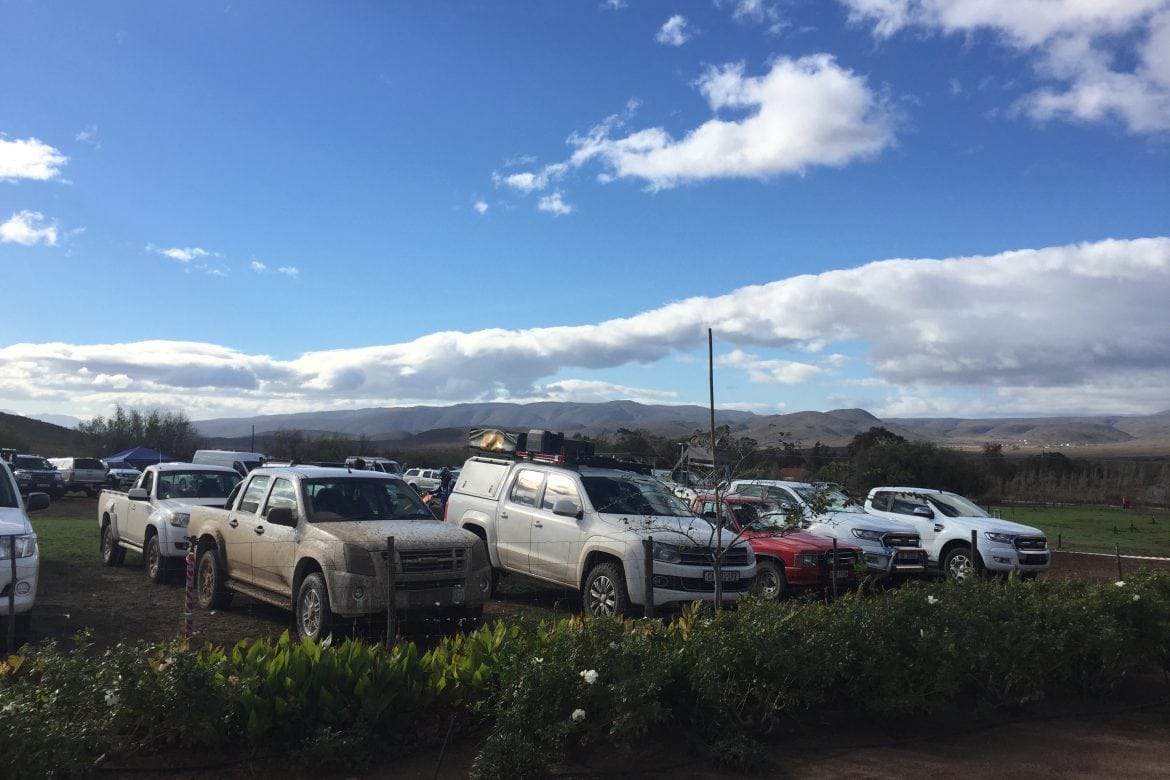 The drive from my overnight accommodation in McGregor to Wandsbeck Wyne was as beautiful as it was relaxing. The distance between the two as the crow flies is little more than 10 kilometres but the journey involved a 25 kilometre round trip, North to where the road forks by the Breerivier close to Wonderfontein Winery and then back South-West along the Agterkliphoogte Valley. Rocky mountains rose up on either side as the road passed through orchards and pastures and wheat fields. 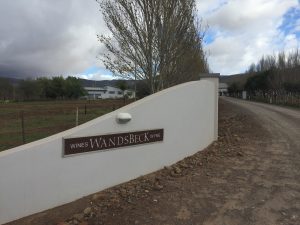 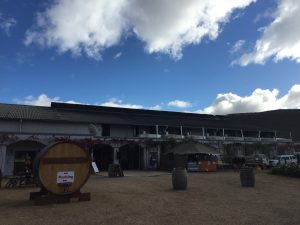 It being the Saturday morning of the Wacky Wine Weekend, I had decided to keep well away from Robertson to escape the crowds. The tarred road gave way to gravel for the final 5 kilometres as I expected a quiet tasting. I soon realised this was not to be by the huge number of cars – or rather bakkies and 4×4 – parked in every corner in front of the cellar building. It was festival time in the valley with an Enduro race to start the morning. The people here must be as tough as their bakkies for this was definitely Afrikaans country as heralded by the unpronounceable (for a Brit like me) valley name. Ride first and drink after and, if the sokkie sokkie band was anything to go by, dance after that. I am not sure if the band was playing country music or rock ‘n’ roll but to my untutored ear it all sounded the same. 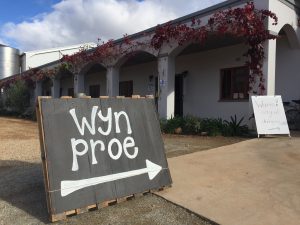 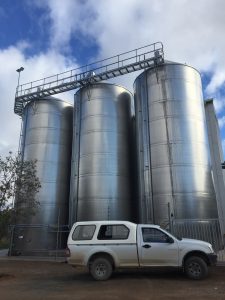 The long low cellar building, unusually with some of the stainless steel fermentation tanks outside, gave clue to the co-operative nature of the winery. Wandsbeck began in 1965 and was called the Agterkliphoogte Co-Operative Cellar until 2004. The 6,000 tonne capacity currently serves 12 different farms and handles 17 cultivars. One part of the cellar was cleared for the tasting, decorated with bunting, and with trestle tables full of fruits, nuts and local produce for sale. 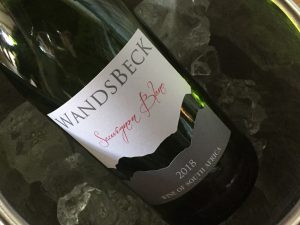 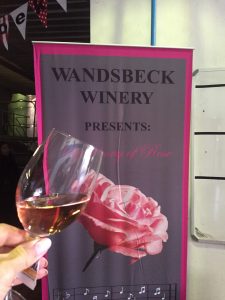 I began with a watery Sauvignon Blanc that started off green herbaceous on the nose and ended with citrus and tropical guava notes to show good complexity. The wine was simple on the palate with moderate rather than high acidity and a short finish. The sparkly sweet, pink, non-vintage perlé Rosé was much as I expected. Shy strawberry aromas led to an undemanding bubbly palate. 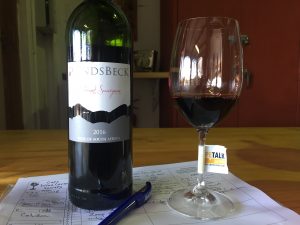 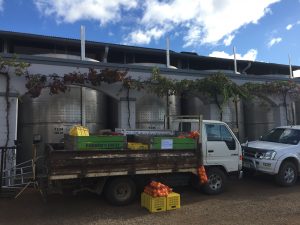 The 2 reds were similarly priced (R55) but from different vintages. I preferred the younger (2016) Cabernet Sauvignon with its bold fruits, more dark than red, of cassis, mulberry and blackberry. Grippy but short tannins had the feel of oak chips on the palate and less fruit flavours for a short finish. I later spoke with Production Manager Tinus who confirmed the use of wood chips for 6 months in the stainless tanks. 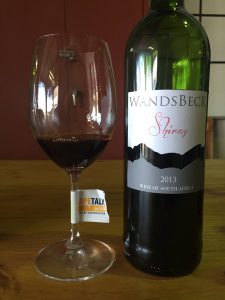 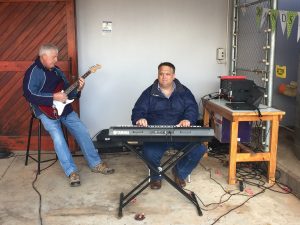 The older, 2013, Shiraz was paler than expected and showed some garnet colour to reflect its age. The wine was recognisably Shiraz by its red and black fruits even if there was not a lot of spice on the nose. Defined tannins that were neither sharp nor aggressive gave the palate more weight and a better finish than the Cabernet Sauvignon. This was a better wine and great value for money. 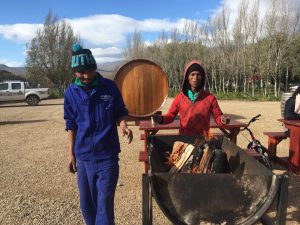 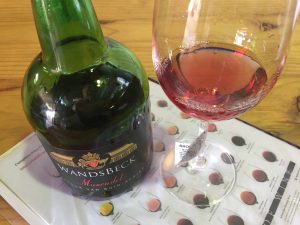 My favourite wine of the tasting was my last, the Red Muscadel. Fortified to 17% alcohol, the wine showed fruity, grapey aromas of marmalade and apricots on the nose. It was sweet, smooth and slight syrupy in texture on the palate. It was extremely more-ish as Muscadel should be. I overheard one local tell his friend that ‘it was easy to make a mistake with that one’. 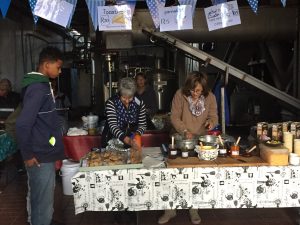 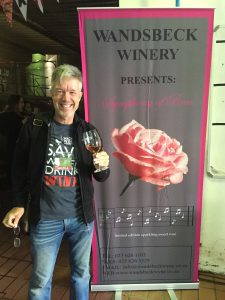 The quality of the wines did not matter. Wandsbeck serves the Robertson Valley and not the Constantia Valley. Tastes and needs and disposable incomes widely differ. There is nothing wrong in that as wineries in both valleys give their customers what they want. You will not find Wandsbeck in the Platter’s Guide either. I left for Windfall after and sure that I was one of the first to leave. No doubt the jol went on for the rest of the day and who knows how long into the night. Hundreds! 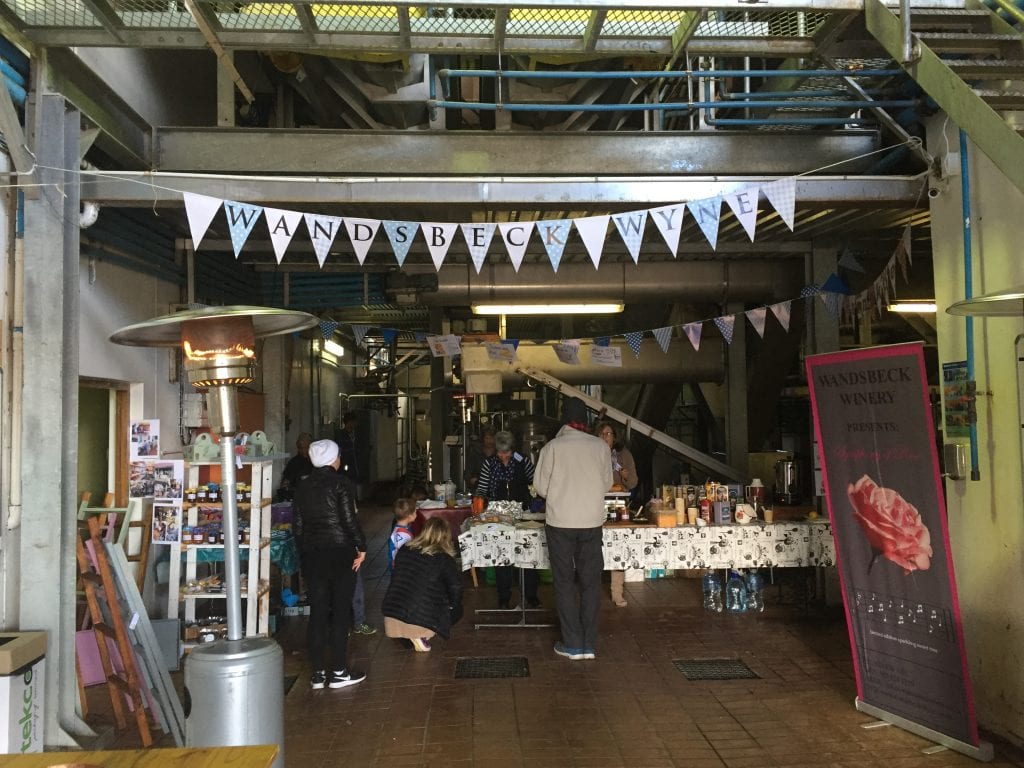