Bushmanspad Gave Me the Weirdest Tasting Ever 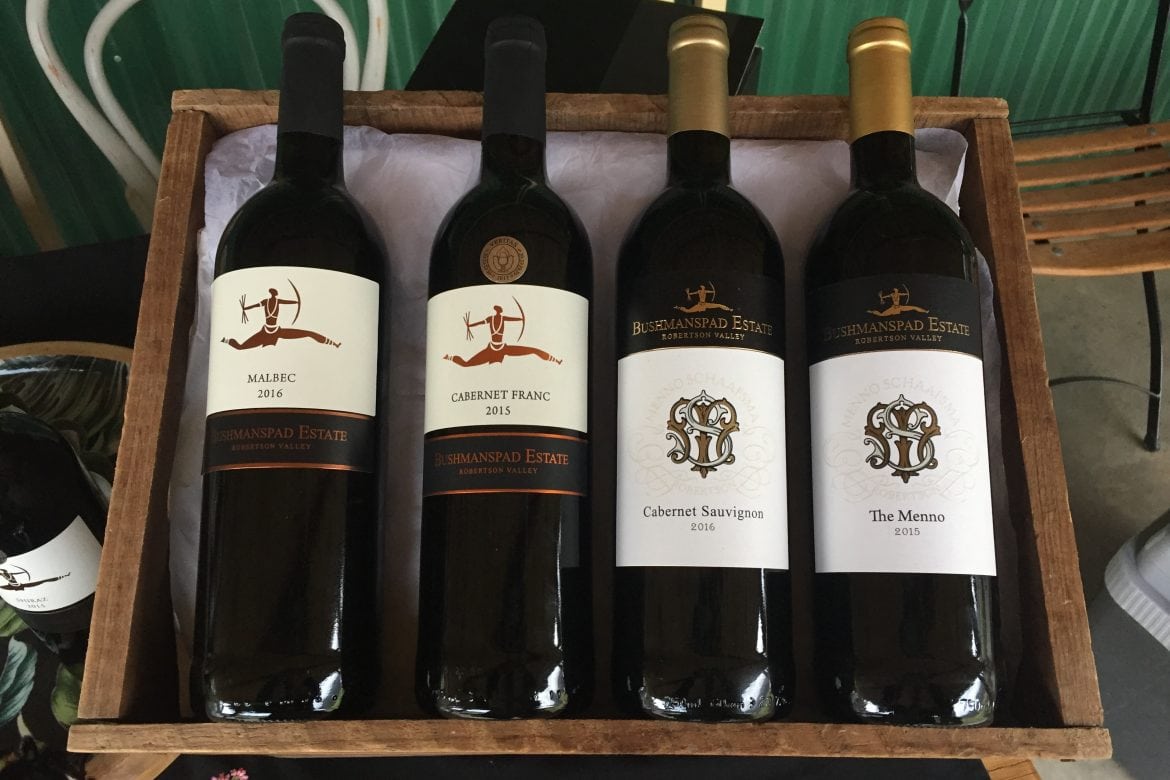 Wow! What a weird tasting. This was the strangest of 150 estate tastings I have ever experienced. Rested from my overnight stay at Millstone Pottery in McGregor, I chose to travel the furthest for my first tasting on the second day of my Wacky Wine Weekend. It meant that I could use up maximum travelling time before the wine farms opened and spend the day progressively heading back towards Robertson. Do not be fooled by the schematic Wacky Wine map. Like all artist impressions, it is not to scale and the journey to Bushmanspad took me at least an hour. 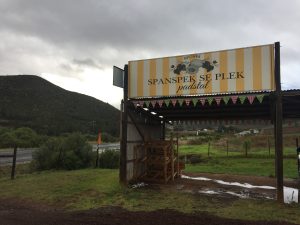 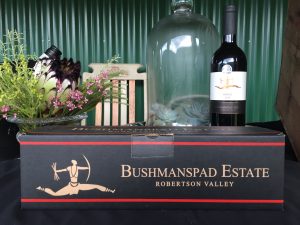 The Wacky Wine guide directed me to the Spanspek Se Plek padstal on the R60 South-East of Ashton on the road to Swellendam. It was a dull morning that threatened to rain as I arrived at 9.30am. The place was near deserted save for the staffs trying to fix the awnings that had been blown apart by the overnight rain and wind. Damp hay bales, barrels and wooden pallets were set out on the lawn in front ready for the expected influx of visitors later in the day. 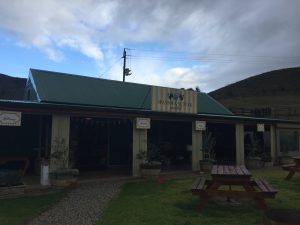 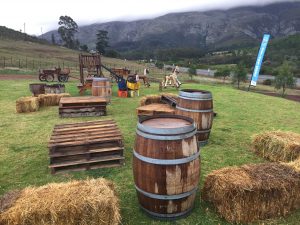 For the moment, I was alone. Bushmanspad wines were on display inside the padstal with their simple and elegant labels featuring a leaping bushman in gold and copper. There were some laid out on a table outside that were ready for tasting. There was however not a sign of anyone from the Bushmanspad Estate, a few kilometres further along the road to Swellendam. The padstal staff as bemused as I was as I looked inside at the wide selection of farm produce – of cheeses, cured meats, jams and preserves, sauces and more. 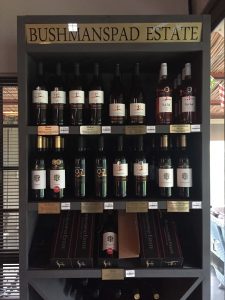 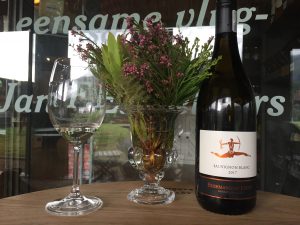 Having come so far, waited a while and with no one knowing when the Bushmanspad staff might arrive, I asked if anyone had a corkscrew seeing that the bottles on the table were unopened. I was more than content to start tasting. My solo tasting thus began. The Sauvignon Blanc was fresh and made in a grassy citrus lemon and lime style. There was a good intensity on the nose that, surprisingly, tailed off on the palate that had a decent acidity but a short finish. 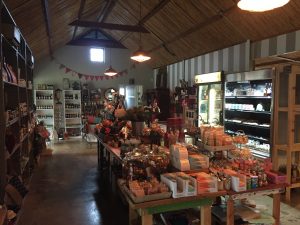 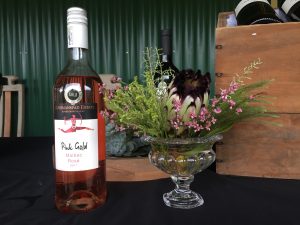 The Rosé, the bottle sat in a large silver ice bucket with the remnants of ice cubes from the day before, was pale to medium salmon in colour with sweet notes of strawberry and raspberry. It was similar in character to the Sauvignon Blanc on the palate to make for an approachable refreshing wine. 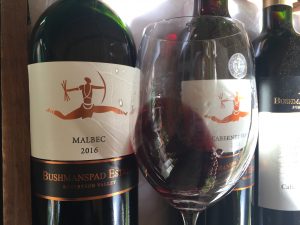 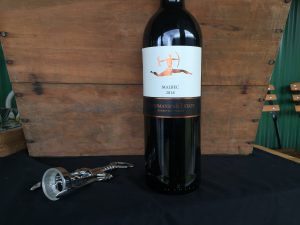 My favourite wine was made from the same cultivar as the Rosé, namely Malbec. It was fresh and fruity with aromas of redcurrant, red cherry and blueberry together with signs of oak from 15 months oak maturation. The mouthfeel was light and the balance towards the oak as the fruit flavours tapered off to leave a bitter finish. 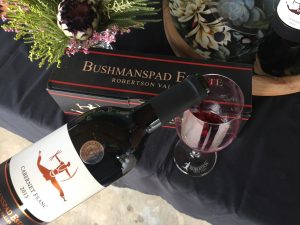 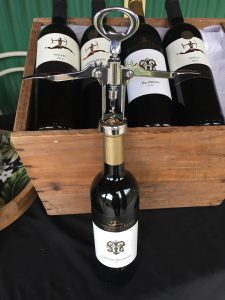 I was alone still as I opened another favourite wine, the Cabernet Franc. Deeper in colour than the Malbec and medium bodied, I liked the vibrant red fruit and fynbos notes, of raspberry, cranberry and redcurrant. This wine too was made in lighter style with green tannins giving enough grip on the palate without being astringent. I rated the Cabernet Sauvignon the same. Fuller in body and darker fruited, I picked out blackberry, mulberry, plum and slight mint on the nose. The palate showed medium intensity with tannins of adequate grip that came to the fore ahead of the fruit flavours. 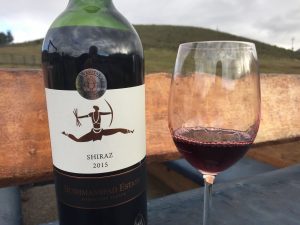 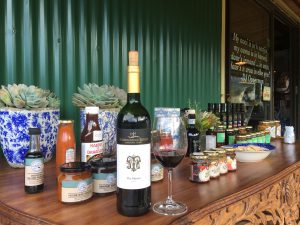 I liked equally the Shiraz with its broody ruby purple fruits that balanced with a liquorice spiciness. The texture of the tannins was softer than for the Cabernets to make a pleasant wine. My final wine of my tasting was The Menno – named after owner Menno Schaafsma – that was a blend of the red cultivars I had tasted, together with Mourvèdre and Merlot. It had a good complexity of red and dark fruit flavours, more red than black, with a rounded palate. The shorter ageing (13 months in oak) showed by a better balance between fruit and tannins in the mouth. 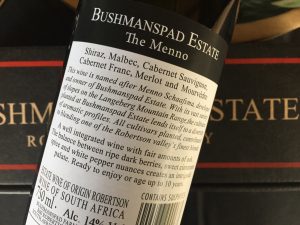 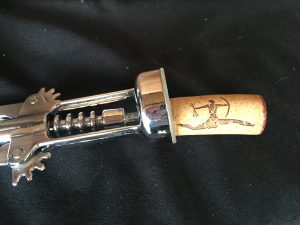 Thus, with all the wines opened my tasting ended. I read after that the 52 hectare property on the slopes of the Langeberg Mountains makes mostly red wine (80%) with French grape varieties that were planted in 2000 and 2001. The name stems from the time that the Bushmen travelled on ancient trails and through kloofs to trade in the valley. Meanwhile, the Bushmanspad staffs had not yet made their way over the hills and into the valley to the padstal. My self-tasting of the pleasant wines, of very consistent quality, was over. 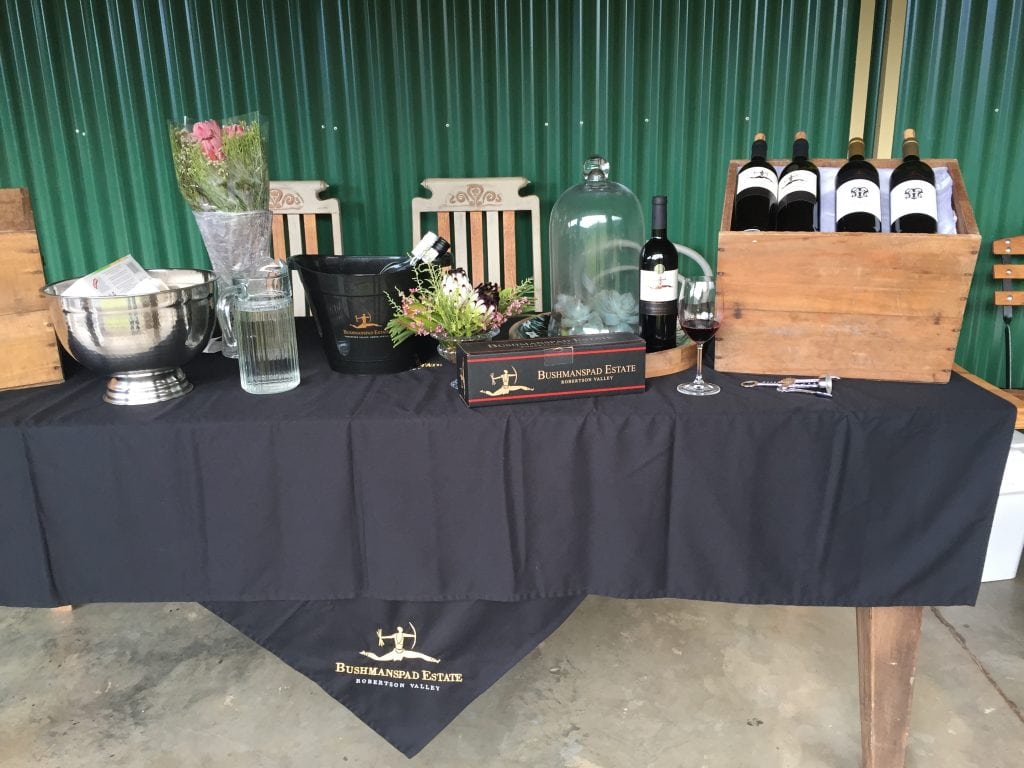