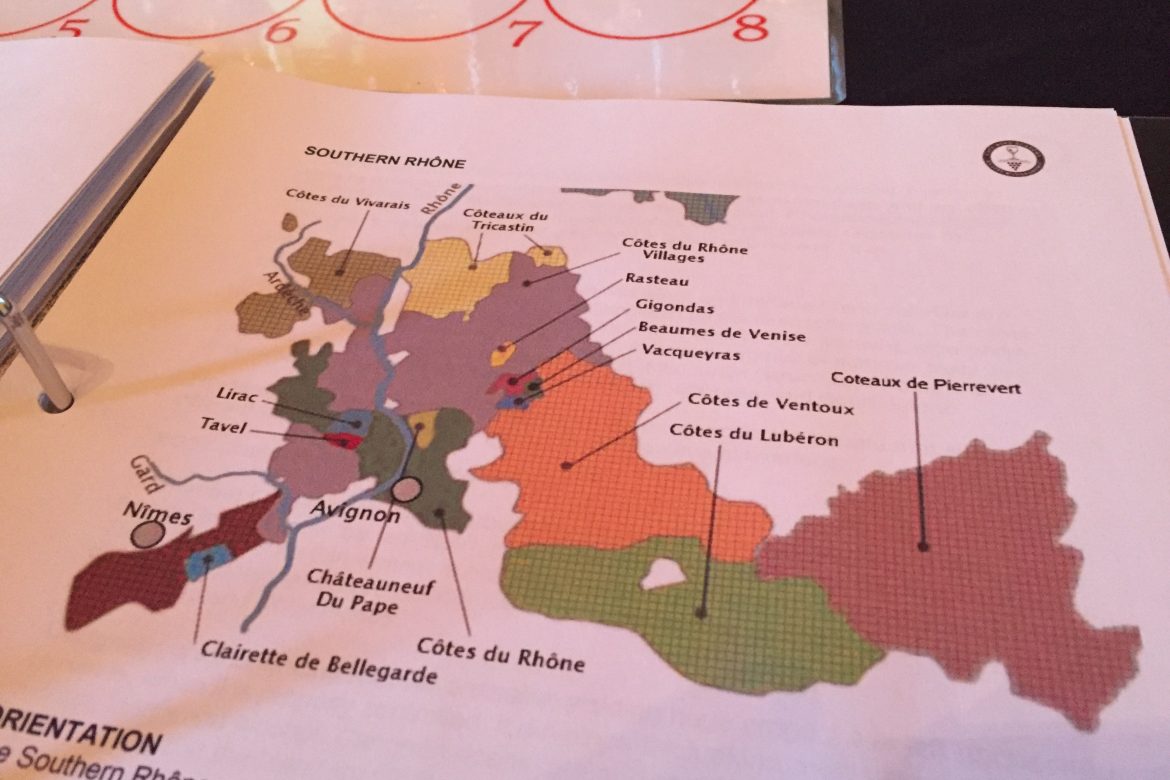 It seemed all too soon to be heading again for Morgenhof Wine Estate for the final day of Module 2 of the Cape Wine Academy Diploma Course – Wines of France. It was, after all, just a fortnight since the last session and there had been a hefty assignment to complete in between. Nonetheless, I left Wynberg, Cape Town early on the Saturday morning with a happy heart. The egg-shell sky was the palest of cream to light blue in colour with white cotton wool-like mist filling every valley hollow. The slate grey Simonsberg mountains rose perfectly silhouetted in the background. Occasional smoke from house fires rose vertically like steel rods in the cold morning air. 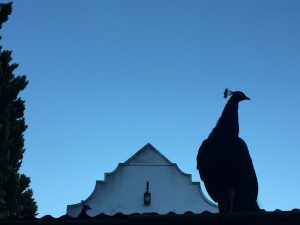 It was good to see my fellow students again as well as to see the bubbly Lizette Tolkein for another lecture and tasting. The final day of the Module was split between a theory lecture on wines of the Southern Rhône and Southern France and a Diploma tasting revision session. 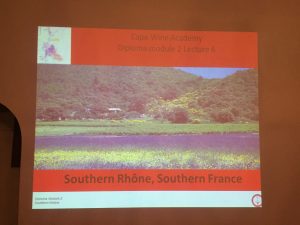 When I think of the Southern Rhône I recall the bright hot weather of summer holidays in the South of France – and of Provence and Languedoc-Roussillon too – and the annoying Mistral winds that make relaxation with a book by the pool a challenge. The region is known for its bountiful sunshine (over 2800 hours a year), temperate Mediterranean climate, and summer drought (the more so as one heads south into Provence). The mixed clay and limestone alluvial soils favour the drought-resistant red grape varieties of Grenache, Carignan, Mourvèdre, Cinsault and Syrah – many of which are being planted in South Africa as the Cape water crisis takes its toll – together with the unfamiliar regional white cultivars that include Grenache Blanc, Picpoul, Clairette Blanc and Bourboulenc. The hot daytime temperatures make it a battle to keep alcohol levels down. 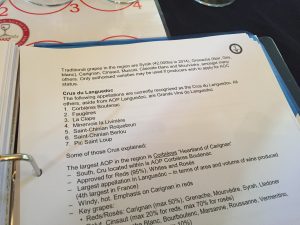 The wines of the region surrounding Avignon are the lighter style reds that we are familiar with in South Africa – the Rhône (style) blends of, as Lizette explained, ‘SMV’, ‘SMG’, ‘GSM’ etc, with the V(iognier) coming from the Northern Rhône. This is the land of fruity Côtes du Rhône, higher quality Côtes du Rhône Villages, affordable and quaffable Côtes de Ventoux and of course the famous appellation of Châteauneuf-du-Pape. Nestled between are the tiny red appellations of Gigondas (bold Grenache blends with relatively high alcohol) and Vacqueyras (at least 80% Grenache), together Tavel that is known for its tannic, deep coloured Rosés. The wines are food friendly, the whites too. 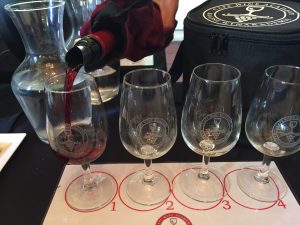 Each appellation has its own traditions and regulations that differ slightly in the permitted proportion of Grenache or minimum alcohol level that are typically French, but also baffle and confuse the student. I never noticed until Lizette told us, for example, that the Châteauneuf-du-Pape bottles were embossed with crossed swords and a crown. More fascinating still, the order differs to signify different things: a crown on top is for Châteauneuf growers, if beneath the crossed swords then the wine is from a Châteauneuf merchant. There’s 13 grape varieties (more if you count Blanc (white), Rosé (pink)and Noir (black) versions separately) that can be used to make white and red Châteauneuf-du-Pape wines. Thankfully, Lizette told us we didn’t have to know them all for the forthcoming theory exam. 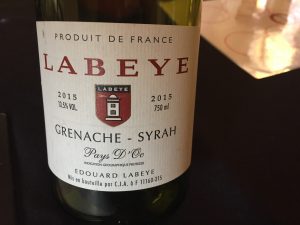 Between the theory slides we tasted some wines of the region and compared them with those of South Africa. Lizette reminded the BLIC mnemonic to analyze the quality of a wine: B-alance, L-ength, I-ntensity and C-omplexity. She mentioned a new one that distinguished South African wine judge Michael Fridjhon uses to assess quality: PAPERCLIPS, or Purity, Aesthetic Integrity, Potential, Equilibrium, Refinement, Complexity, Luminosity, Intricacy, Persistence and Savouriness, as wines with these qualities are ‘created’ works of art, the artefacts of the winemaker’s intention. 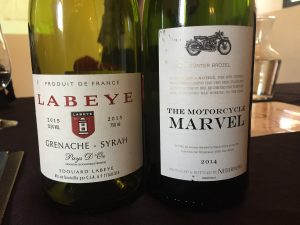 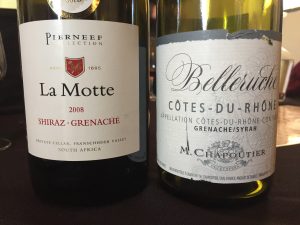 The first 2 flights contrasted Old World (France) and New World (South Africa) Grenache-Syrah blends, vintage pairings of 2014/15 and of 2008. Practice helps to detect the differences and to spot the clues to them. I feel I am improving (aided by my weekly to fortnightly Cape Wine Master practice tasting group) but speed is a challenge as Lizette so ably describes the nuances between the wines in detail. After, we tasted a Gigondas and a Châteauneuf-du-Pape wine from the same vintage. 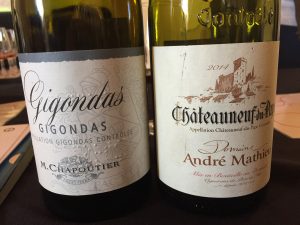 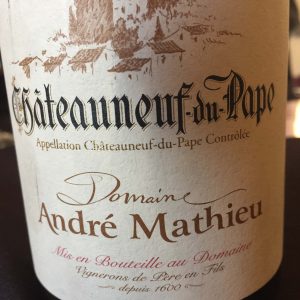 Lizette moved swiftly on for a quick, final canter through the regions of Provence and Languedoc-Roussillon. ‘It’s all in the notes’ she says which merely means even more reading back at home for the student. Just as ‘Mistral’ was the buzzword that Dave March drilled into us for the Northern Rhône a fortnight ago, so Lizette talks of ‘garrigue’ for the wines of the Southern France around the Mediterranean. Garrigue is the scrubland found on the limestone soils along the coast – almost like a native fynbos – often used to describe the aromas of the local wines, namely a mix of juniper, thyme, rosemary and lavender with pungent floral fragrances. 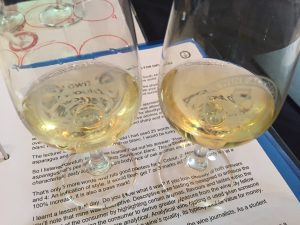 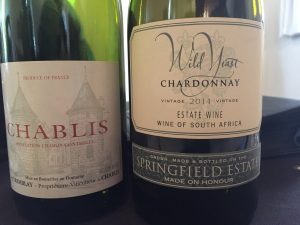 Sadly, we did not taste the wines of the Provence, known for its Rosé (80% of all wines produced and 40% of all France’s Rosé) nor too of Languedoc-Roussillon. The latter is a vast region, originally separate as French Languedoc and Spanish, Catalan influenced Roussillon. It is the biggest wine-producing wine region in France (bigger even in volume than the USA) with many local and Italianate grape varieties making wines for mostly local consumption. I did remember the big, black spicy Mourvèdre-based wines of Minervois and the deep, highly tannic and acidic Corbières made from Carignan even though unable to taste today. 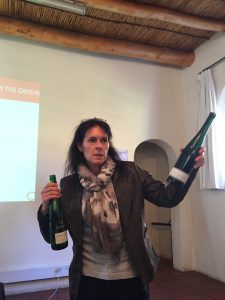 The morning coffee break brought a welcome end to the formal part of the theory of the wines of France, having completed cognac, armagnac, champagne and the wines of Alsace in Module 1. My studying is far from over though with another assignment due within 10 days and the Module 2 three-hour Theory Exam a week after, hence the delay in completing this review article. 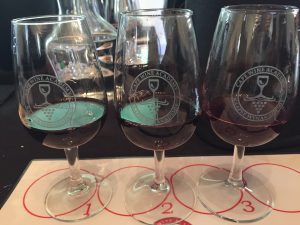 We finished with a final session to recap and practice more blind-tasting. The Tasting Exam is not for another year but there’s never too much practice to be had. The trick to succeed is to show the deductive power and processes from the analysis of the wine/s in the glass. This highlights the main difference between Cape Wine Academy Certificate and Diploma levels. 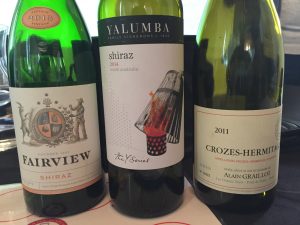 As we compared Riesling, Chardonnay and Syrah/Shiraz from the Old World and New World, Lizette reminded us of the exam format – 3 flights of either 1 white/2 red or 2 white/1 red wines for tasting – and the task to identify the grape variety, the country, the region and to give reasons why. Old World wines are terroir driven and with ‘concentrated fruits’ whilst New World wines are ‘fruit-forwards’. Theory knowledge of each cultivar is of course vital – fruit, body, tannin, acidity and alcohol, together with the individual aroma, flavour and stylistic profiles – to be able to ‘rule in’ or ‘rule out’ the likely cultivars: Sauvignon Blanc, Chardonnay, Chenin Blanc or Riesling for whites and Pinotage, Merlot, Cabernet Sauvignon or Syrah/Shiraz for reds. Lizette said we must use key phrases like ‘consistent with’, ‘excludes’, ‘suggests’, ‘excludes’ and ‘lack of … suggests’ and more in our answers. 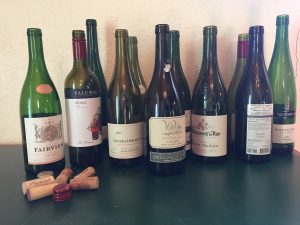 I left for Franschhoek for the annual Shiraz & Charcuterie Festival, my first, with my head buzzing. It was great to be halfway through the Diploma Course lectures but there was assignment and exam revision ahead of me. It would soon be time to knuckle down and learn! 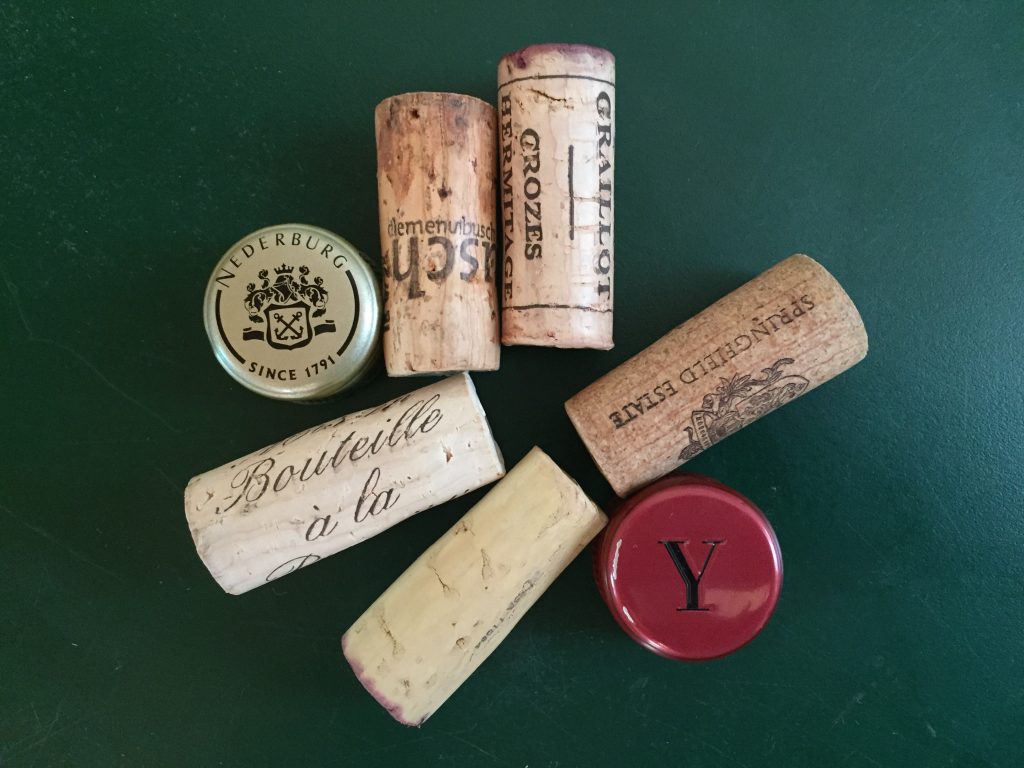