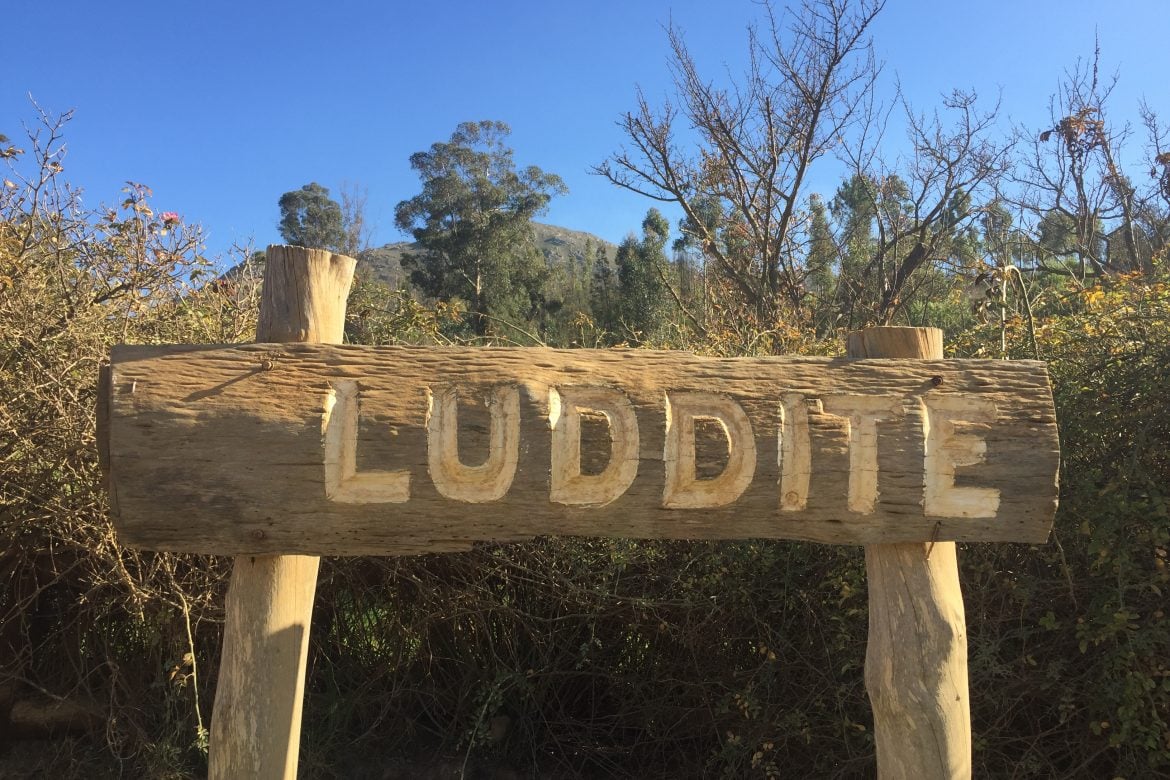 I have long wanted to visit the vineyards in the Bot River Ward having tasted the excellent wines either side in the Elgin and Hemel-en-Aarde Valleys. Luddite was my first port of call and what a treat it was. Bot River village was easy to find having driven East from Cape Town early in the morning along the N2 highway, turning off just pass the turnoff for Kleinmond and Hermanus. A left turn through the village and a right turn took me onto a well graded gravel road. One and a half kilometres later I reached Luddite due to the good humour of my trusty satnav, for there was not a sign in sight for the winery from the village of Bot River. 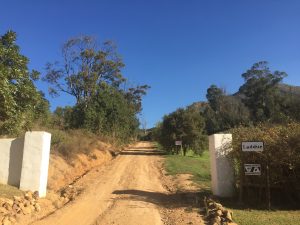 Sharon told me on my arrival at the Tasting Room – with its magnificent views down the slopes of the Houw Hoek mountains and towards the village and beyond – that local bylaws forbade signs from the village. That rather surprised since I had passed those for Beaumont Family Wines, my next port of call, en route to Luddite. It mattered not now as I relaxed in the spacious tasting room, complete with floor made from old barrels, which sat above the cellar below. 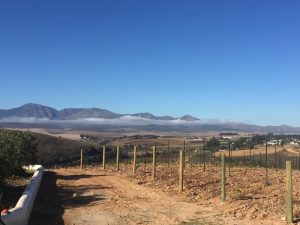 Luddite, as I was to learn, is a blend of traditional and modern. Just 4 wines are produced, 2 whites and 2 reds, from the 6 hectares under vine on the 17 hectare property. The grapes grown include Chenin Blanc, Cabernet Sauvignon, Grenache, Mourvèdre and (in the vineyard below the Tasting Room) Shiraz. A further 2 hectares of Chenin Blanc, Grenache and Shiraz have been planted. 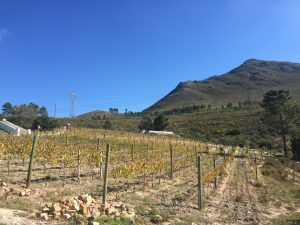 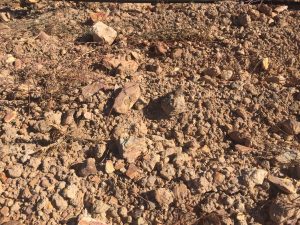 Husband and wife Niels and Penny Verburg make the perfect winemaker and viticulturalist team. They met at a friend’s 21st birthday party in 1985 before attending Elsenburg Agricultural College (he passed, she failed!). Romance blossomed. Four years later they moved overseas as there was no vineyard available for them. The family returned from Europe to South Africa in 1995, Niels having work as a ‘flying winemaker’ in France, Chile, New Zealand, Australia and Greece. The farm was bought as the family moved up the hill from Beaumont where Niels worked for 8 years. 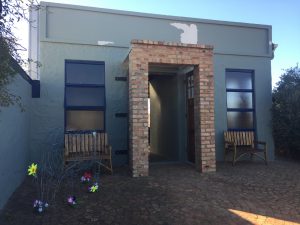 The name Luddite is believed to have come from Ned Ludd an apprentice worker who smashed 2 stocking frames in 1779. The Luddites were a radical group of textile workers and weavers who in the early 19th century destroyed their weaving machinery as a form of protest. They feared that the machines would replace them and that their hard-earned weaving skills would go to waste. They were perhaps right but the 1811-16 rebellion ended when the mill owners enlisted the help of the British Army. Today, the term relates to opposition to industrialisation, automation, computerisation and new technology in general. 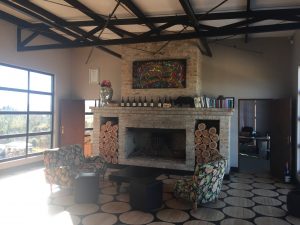 The Luddite website proclaims that ‘technology and mechanisation will never be a substitute for passion’. That as may be but I suggest that the use of technology, for example to refine micro-irrigation or to analyze complex grape skin phenolics as an aid to harvest timing, or of automation for bottling and labelling does much to create the time and space for passion. In keeping with this trend, the white and red blends are called Saboteur. A saboteur is a person who intentionally destroys property to hinder his enemy. The word originates from the French word ‘sabot’ which was a wooden shoe that the millworkers would throw into their machinery to make it break down. 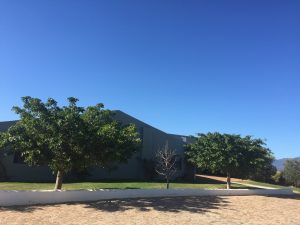 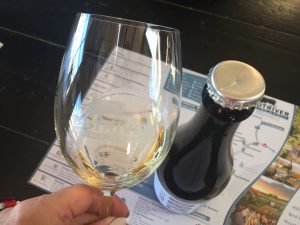 The white Saboteur, in distinctive bold lettered label an unusual crown cork stopper used since the maiden vintage in 2015, was a Chenin Blanc-led blend containing Viognier and, equally unusually, Blanc Fumé. Blanc Fumé originally was Sauvignon Blanc from Pouilly-Fumé in the Loire Valley, France that had a characteristic smokey or ‘gunflint’ perfume. Today, it usually refers to a Sauvignon Blanc that has been barrel-fermented or lightly oaked. I didn’t detect any gunflint or smokey aromas on the nose but instead a beautiful aromatic bouquet of sweet lemon, gooseberry, melon and white peach. The wine was clean on the palate with just a hint of creaminess. I bought a bottle. 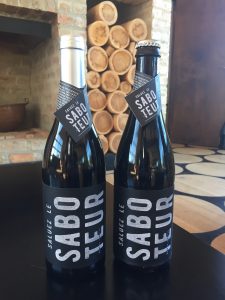 The single variety Chenin Blanc was sold out and not for tasting and so I sampled next the Shiraz-dominated red Saboteur. It comes with either crown top or regular cork closure. I would have liked to have tried a comparison but had to choose between. The full-bodied wine showed a complexity beyond a single variety on the nose – notes of slightly sweet spicy red fruits, blackcurrant and bramble – with a good texture of tannins for their age. 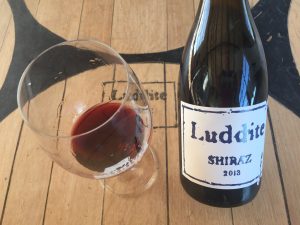 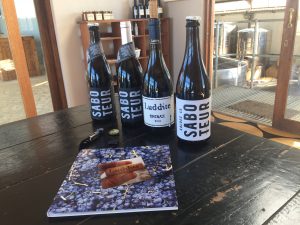 I finished the mini-tasting with the flagship Shiraz with hand-numbered label. The full bodied ruby people wine was superb and, but for the price as heady as the 15% alcohol content, I would have easily bought a bottle. Bold and fruity with great complexity and intensity of dark berry, blackberry, bramble and blackcurrant aromas, the wine was well balanced on the palate with rounded, integrated tannins and a firm finish. Sharon told me that Niels sits on his stoep alone with a bottle. If he can drink an entire bottle, the wine is ready for release but not until it has aged for 2 years in 20% new French oak and matured in the bottle for a further 2 years. 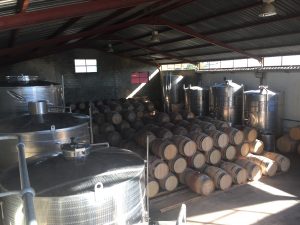 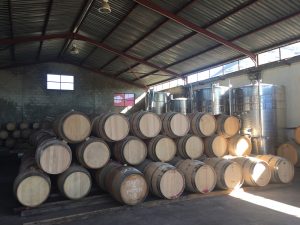 Before leaving I took a brief look at the cellar beneath the Tasting Room. Luddite Wines made for an interesting and highly enjoyable start to my day in Bot River. Technology or not, with or without automation, the wines were all well made. I could easily have bought every bottle – and duplicates of some with crown top and cork to compare at home after. 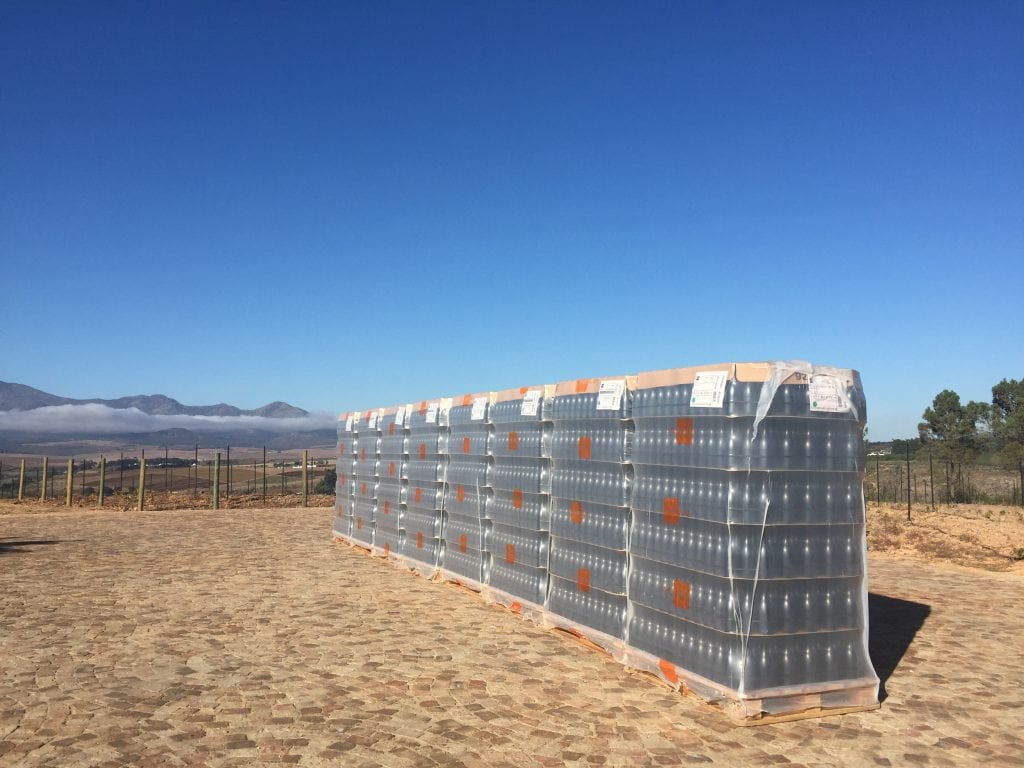 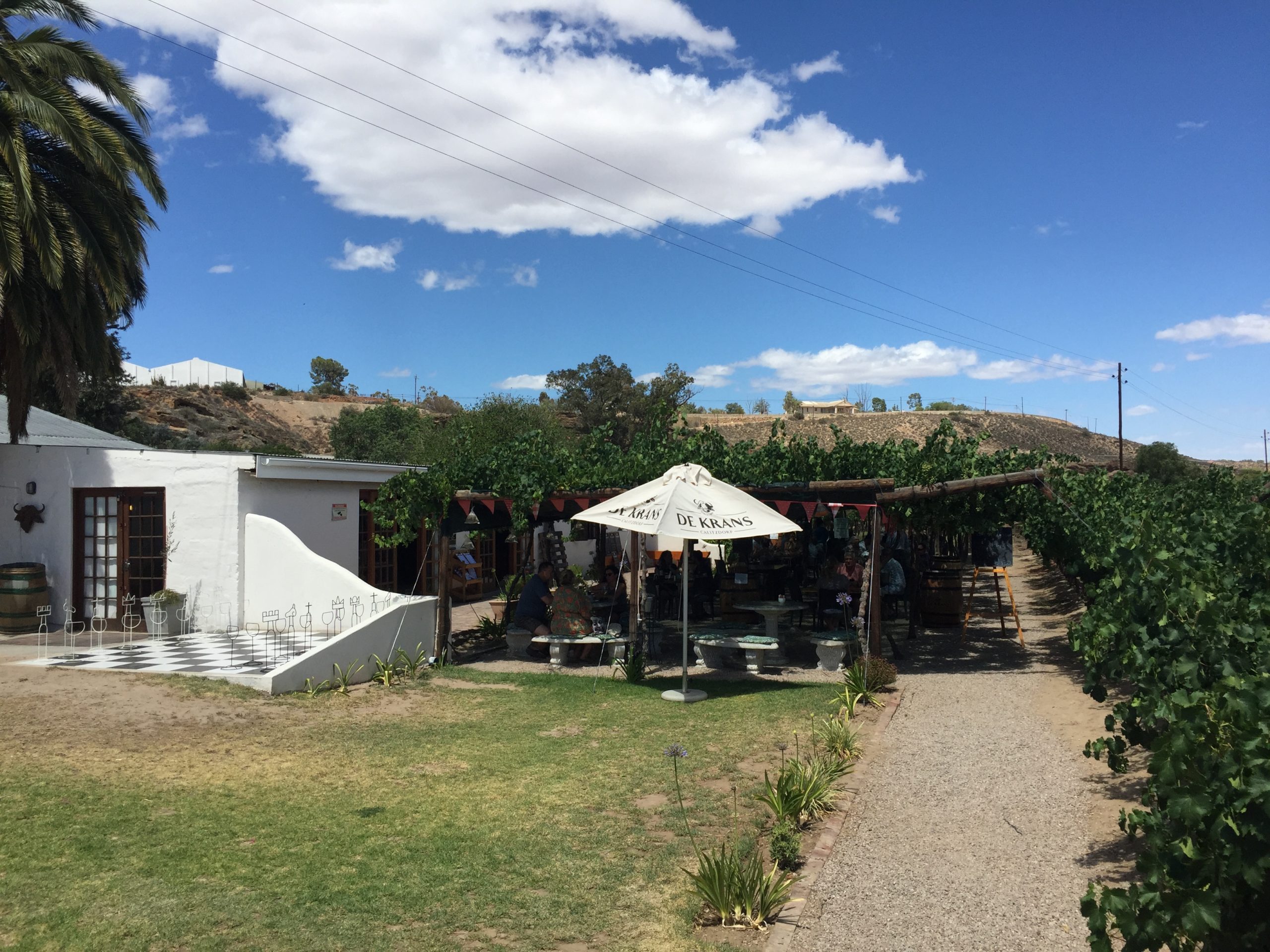 Putting into Port at De Krans