Onderkloof Beats All the Odds Below The Valley 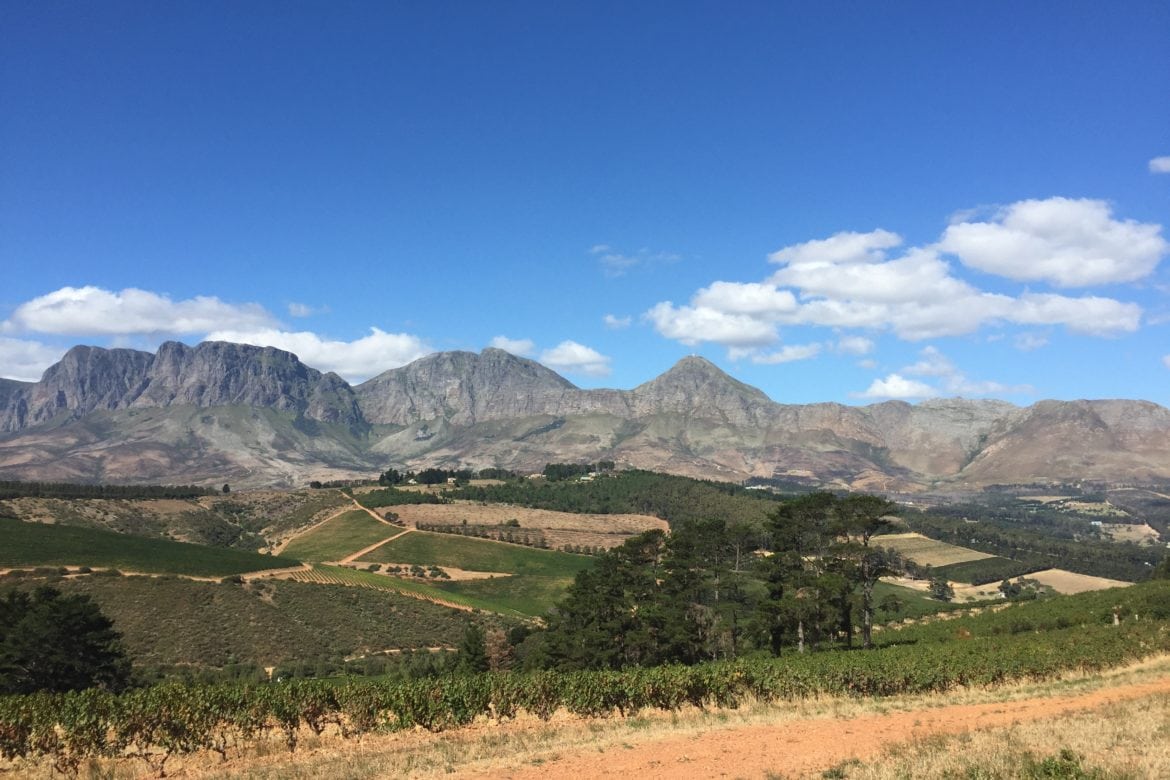 Look in the 2018 Platter’s Guide. The only mention of Onderkloof Estate is on a map at the back (page 647 if you’re really interested). It may surprise that not every South African winery is in the wine ‘bible’. Abingdon (KwaZulu-Natal), Arendsig (Robertson) and Ataraxia (Hemel-en-Aarde) wines, for example, are included though none of their wines are listed or rated. You won’t find Wolseley producer Seven Oaks Wines in the Guide at all. In complete contrast, you will find Onderkloof active on social media (Instagram). That is what drew me to the estate. It also suited as I was in the Helderberg area for visits to Lithos Wines, Skaap Wines and Capelands Wine Farm during the day. 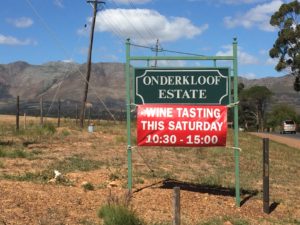 Onderkloof was well signposted from the Sir Lowry’s Pass Road halfway between Somerset West and Sir Lowry’s Pass Village. The estate opens to the public from 10.30am to 3.00pm on the 1st Saturday of each month. Marketing & Events media guru, Luanne had kindly made it possible for me to meet the Owner and Winemaker, father and son Beat and Yves Musfeld on the Friday afternoon, to tie in with my other tastings. 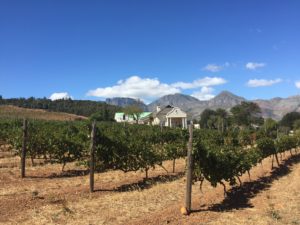 The Onderkloof website tells but a fraction of the story behind Beat becoming owner of Onderkloof. Let Swiss-born, former engineer, Beat tell it to you in full as I shall only record a shortened version here. He came to South Africa from Lucerne in the early 1990s to help rebuild the Table Mountain cable-car, the Swiss being world experts in the design and construction of gondola cableways. When the project finished, he and 2 investors bought Onderkloof in 1997. It was then a grape and dairy farm. Subsequently, Beat became sole owner (let him tell you why). He then invited his son to join him, having qualified in winemaking at a German University and time as an apprentice winemaker in Switzerland, Spain and the USA. 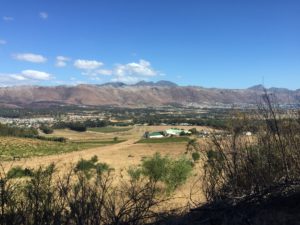 Onderkloof means ‘below the valley’ which describes its location close to the pass over the Hottentots Holland Mountains, along which ox wagons would transport goods to and from Cape Town. It’s been a long road for Onderkloof to become the thriving wine estate it is today. There was no cellar to start (the farm grew table grapes) but one was built and equipped with the latest equipment. Cleverly, it has spare capacity to make wine for other customers. 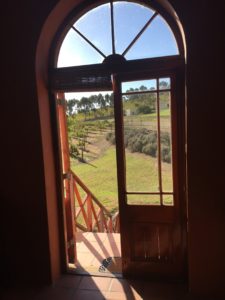 Before tasting, Beat took me on a guided tour of the estate with Luanne. Ridgeback Alex (in paw-by-paw mode) was never far from us in the car. Beat explained how vines were re-planted until 2000. Others were rejuvenated by serious ‘pruning’ – just above the graft – using chainsaws. Much of the 65 hectare farm is covered in forest but 12 hectares is under vine: Muscat, Chenin Blanc, Sauvignon Blanc, Pinotage and Shiraz. Other cultivars – Chardonnay, Cabernet Sauvignon, and Cabernet Franc – are either grown on land leased from a neighbour (5.8 hectares) or bought in to meet the demand for Onderkloof wines. 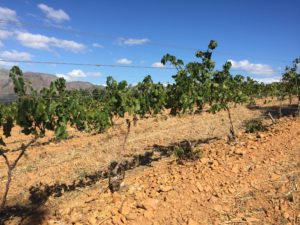 The views from the high point of the estate (250 metres above sea level) were magnificent – down the steep Southerly slopes of the Schapenberg to False Bay some 6 kilometres away. Cool sea breezes help to preserve acidity and extend the ripening season. Consequently, the harvest is 2 weeks later than in Stellenbosch. I could see how the stony and gravelly soils aid water retention (the vines are unirrigated). 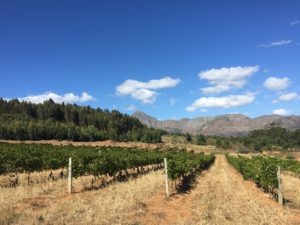 The tour had whet my appetite and it was soon time for wine tasting, joined by son Yves, busy with his 7h harvest. We sat around the large table in the Tasting Room. It felt like a family occasion with descriptions of the wine (thankfully in English) interspersed with business discussions in Afrikaans. The pale straw shiny Chenin Blanc made a good start to the tasting. It had good intensity of aromatic lemon, melon, guava and honey aromas. There was slight creaminess in the mouth (10% is barrel-fermented, the remainder made in stainless steel tanks) to make for a crisp, dry wine. 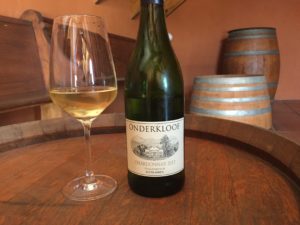 The Chardonnay was one of my favourite wines. It had a beautiful bright straw colour and a fresh, vibrant bouquet of lime, apple and melon. Natural fermentation on the lees, together with 6 months maturation in the barrel, gave a creamy texture that balanced well both fruit flavours and a bright acidity. It had a solid finish too. 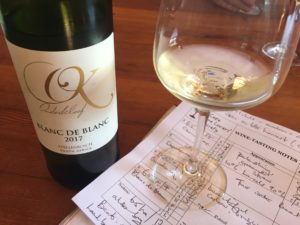 Though not one of my preferred wines, the Muscat-led (70%) Blanc de Blancs, sporting a modern new label, is an Onderkloof best seller. I can see why due to its fruity sweet character, low alcohol (11.5%) and easy drinking style. The raisin Muscat flavours were to the fore, with the added Chenin bringing structure and acidity. 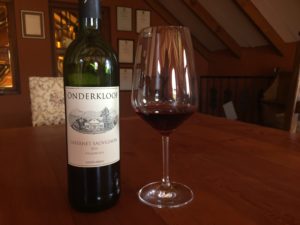 Red wines included Cabernet Sauvignon and Cabernet Franc from the same vintage (2014) and at similar price. Unusually made in stainless steel tanks and bottled after 2 years, the Cabernet Sauvignon was predictably light in feel. The wine was bright and open, with green pepper spicy notes adding to the blackberry, cherry and blackcurrant nose. Stalky tannins were bitter on the palate. 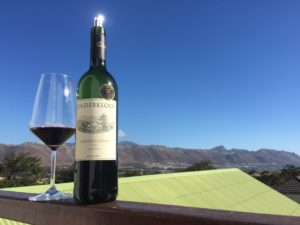 I much preferred the Cabernet Franc that was made from grapes grown on the neighbouring farm. It was my favourite wine of the tasting. I was not surprised to hear that Tim Atkin had rated the wine the Best Value Red in South Africa (it costs just R70). The Onderkloof website suggests that the cultivar was likely the product of a natural cross between Cabernet Sauvignon and Sauvignon Blanc. This is incorrect. DNA analysis in 1997 showed that Cabernet Franc and Sauvignon Blanc are the parents of Cabernet Sauvignon. I digress. The medium-bodied ruby red wine was full of intense red fruit flavours – redcurrant, red plum and blueberry. Compared to the Cabernet Sauvignon, the tannins were smoother, rounded and less astringent. 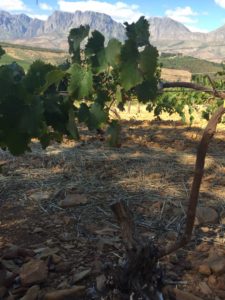 These 2 cultivars were blended in equal amount to make the Sir Lowry Classic. This was bright and clean with modest intensity of fruit aromas on the nose. The Cabernet Sauvignon tannins were too lively on the palate to overpower the berry flavours. To finish, the classic medium-full bodied, purple tinged ruby red Pinotage showed ripe rather than overly juicy cherry and plum aromas. These sweetened on the palate to make for a rich sweeter dry wine with a moderate finish. 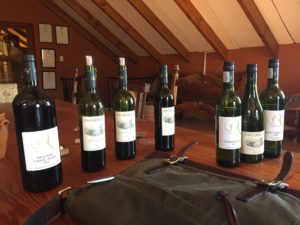 Onderkloof makes decent wines that are excellent value for money. Their quality is well worth the price and there are some hidden gems for the discerning buyer. I am sure too that the wines are pitched at just the right price and quality for their market, as evidenced by the need to buy in grapes to meet demand. Not every wine farm needs Platter’s to make it a success. 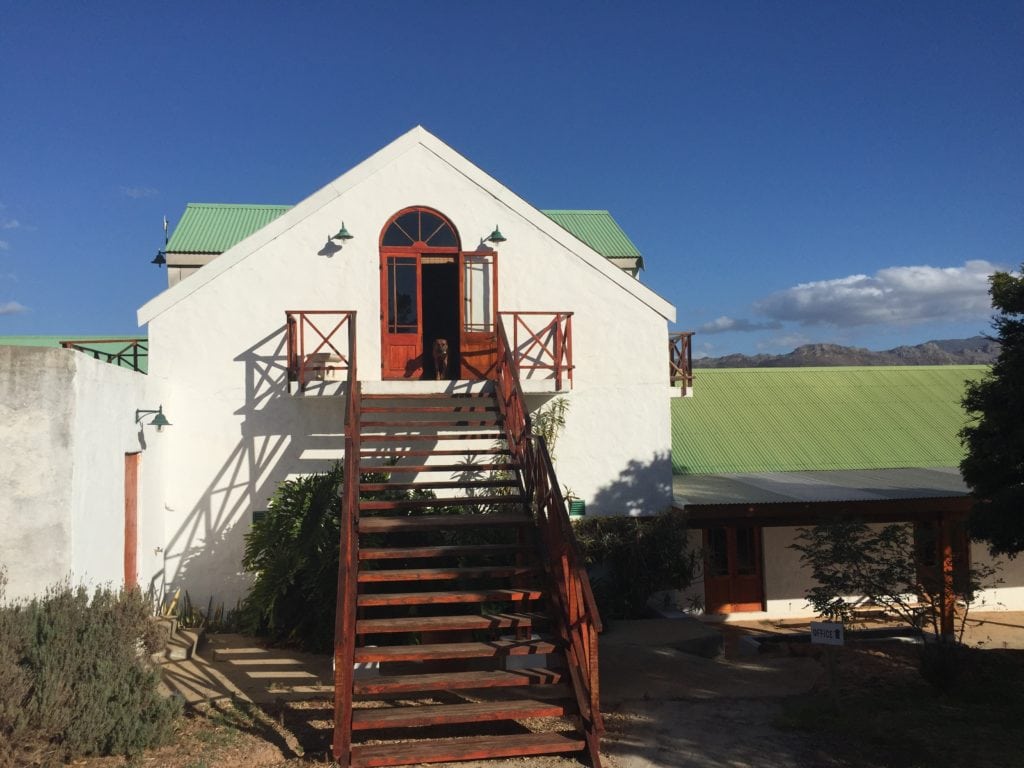