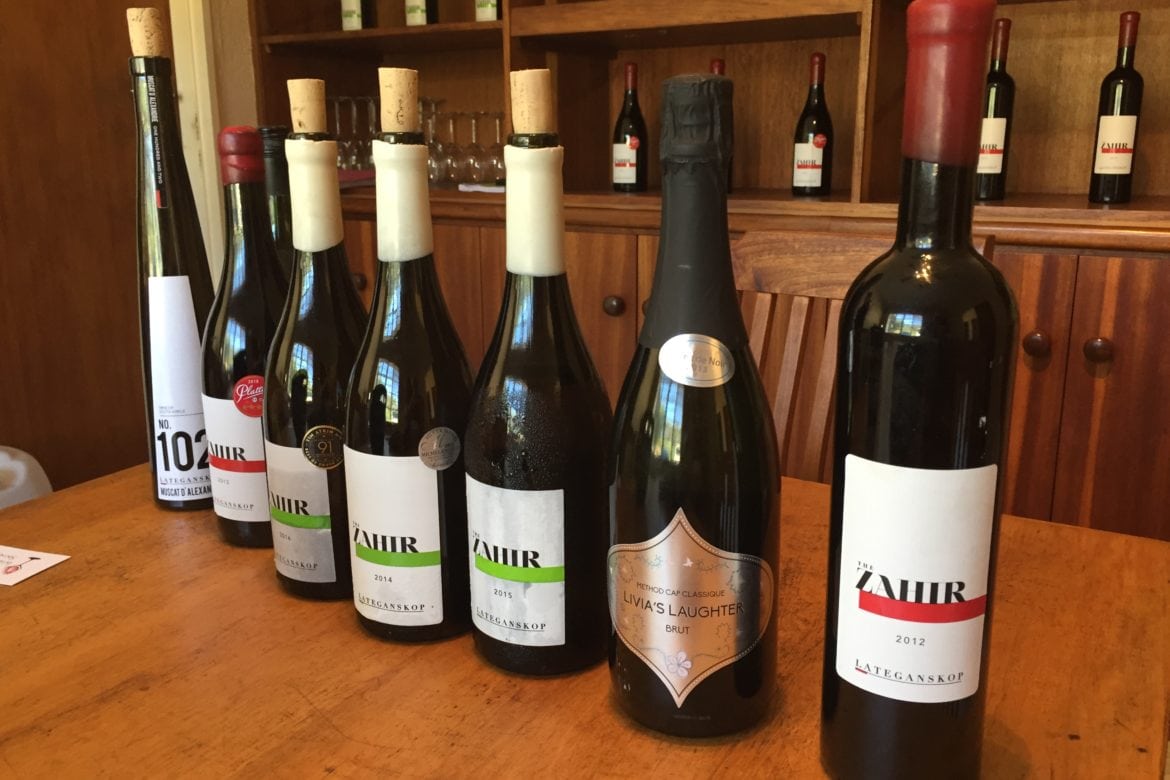 The Tasting Room at Lateganskop must have been the hardest I have yet to find in over 120 vineyard tastings. The only signs on the Breede River Valley farm guided the visitor to the Office block which was closed early on the Saturday morning. I had arranged to meet Assistant Winemaker Kéan for tasting at 9.00am but both the office landline and his mobile went unanswered or went to voicemail. I thus had an impromptu tour of the Cabernet Sauvignon vines and blueberry plantings, for export to the UK, in large hooped ‘greenhouses’ in the morning summer sun. 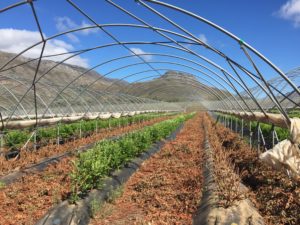 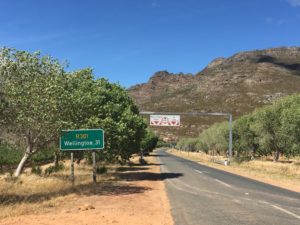 Much earlier, at 6.30am, I had left Cape Town for a weekend in the Wolseley area via the beautiful Bains Kloof Pass. My partner was meeting her parents for fig picking at Hoogwater Farm on the R43 South of Wolseley. This left me free for wine tasting during the day. It was not until 9.30am that I tracked Sean down in the Tasting Room. He showed me the Cellar to start that, like many at this time of year, waited expectant for the imminent harvest. 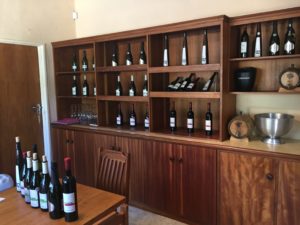 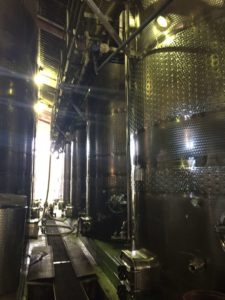 We returned to the small Tasting Room, basic and functional as many are in the area and reminiscent of the one at Waboomsrivier. We began with a youthful, fresh Sauvignon Blanc that cost just R35 a bottle. The wine was named after twins Joubert and Jacobus, who founded the winery in 1969 when father Willem Hendrik Lategan decided a bigger facility was needed, instead of individual farms with smaller cellars. The wine was green herbaceous in character and light in acidity and style. Green fig, asparagus and lime flavours mingled with some guava. 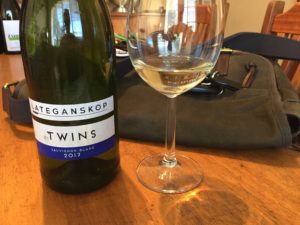 I was treated next to a vertical tasting of Chenins Blanc from 2014, 2015 and 2016 vintages. The wine is named Zahir, a word I did not know the meaning of. Kéan explained that a Zahir is a legendary person or object with fable-like powers that captivate the mind and soul of the person who comes into contact with it. It is considered to be a state of holiness or madness which is perhaps appropriate for South African vineyard owners as they grapple with the challenges of an industry undergoing rationalisation, change and drought. 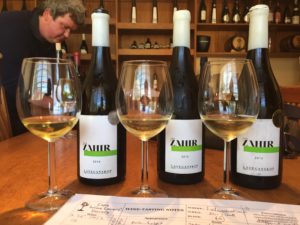 The grapes for each Chenin Blanc were from the same bush vines (circa 22 years old) and matured for 13-16 months in oak barrels. There were subtle differences between them that were surely due mainly to the season. The youngest, the 2016 vintage, was more oak-forwards than its 2015 cousin and with greater intensity of melon, lemon and citrus aromas. It was light and clean on the palate, with similar feel to the 2015 wine, but was short on acidity and at the finish. 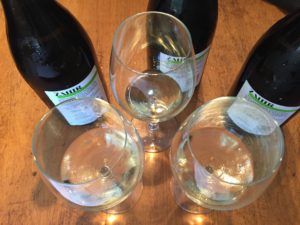 By contrast, the 2015 vintage also had a moderate acidity but the wine was more pronounced at the finish. The bouquet was more delicate and shy, with less sweeter honey or nougat notes. I liked most, and bought, the 2014 wine. The aromas were richest and most complex, showing warm lemon, lime, pineapple and nougat on the nose. The fruity complexity followed through to a balanced, dry, fresh palate. 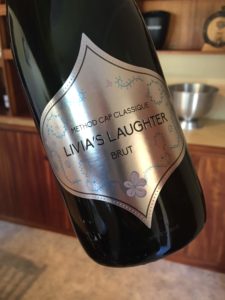 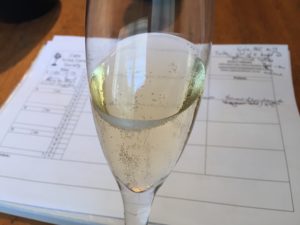 The Brut MCC looked great – pale straw with a pink blush in colour and with a steady flow of bubbles in the glass – but disappointed in the mouth. The nose was extremely shy. The moussante mouthfeel was good but the red berry flavour was indistinct and lightweight. This surprised as the wine had spent 4 years on the lees. Kéan told how cultivar mix and balance differ each year, this being the 3rd vintage made. The name stems from the youngest of the Lategan clan, Livia, part of the 6th generation and unbelievably the only girl amongst 11 boys at the Cellar. 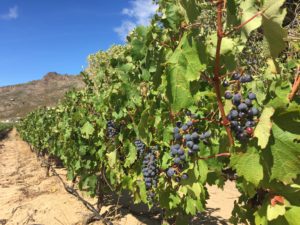 Most of the cultivars grown on 238 hectare winery are white (70%), namely Sauvignon Blanc, Chardonnay, Chenin Blanc and Sémillon. The majority of the wine is sold in bulk with only a small portion bottled under the Lateganskop label. Cabernet Sauvignon and Pinotage are the 2 red varieties grown on the farm and major components of the Zahir Cape Blend. I tasted 2012 and 2013 variants, the first with added Merlot and the second with Cinsault. 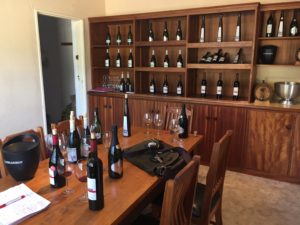 I just preferred the 2013 wine. Both vintages were full-bodied and deep ruby in appearance. The intensity and complexity on the nose was best for the older vintage, showing ripe plum and cherry aromas. The mouthfeel was dry and with grippy tannins. In comparison, the younger wine was interesting on the nose – less fruit-driven and with oaky, dusty undertones – and, though still tannic, smoother, better balanced and more rounded on the palate. 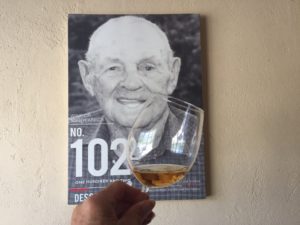 The final and most interesting wine of the tasting was the Muscat D’Alexandrie dessert wine. The ‘No 102’ name celebrates the life of Willem Hendrik, who lived to 102 years. He must have been quite a character as he was still driving at 98 years on the road to Bergsig (a vineyard he also founded), feeling entitled to do so as he built the original road. The elegant wine bottle is the shape of an elegant tapering cylinder. Deep gold in colour, the wine had delicious, warm raisin and apricot flavours that were sweet, smooth and rounded on the palate. The above average alcohol constant showed, boosted to 16% by the addition of grape spirit. 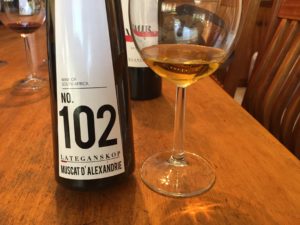 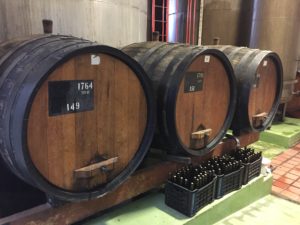 Unusual in South Africa, the wine is made using the solera method, a fractional blending style more commonly used in Spain to make sherry. The process involves taking wine from the oldest barrel which is then replenished by wine from barrels of the same type but a year younger. These in turn are replenished by wine that is 2 years younger, and so on, with the youngest barrel replenished with new wine. It is used to smooth out differences between vintages. The No 102 wine contained vintages from 5 to 17 years old. I bought a bottle. 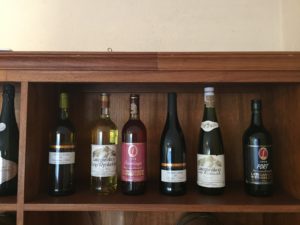 Lateganskop, despite the frustrations of the initial delay, proved to offer an interesting tasting and with some interesting wines. Vertical tastings are always a pleasure and rarely offered at vineyard tastings. They show, as here, the nuances of the different seasons and especially so if the wines are made with the same vines and viniculture. I shall look forwards to sampling the No 102 again and feel it will need a special occasion to do so. I intend to live to 100 years old too (the day is already packed with several activities) but am unlikely to be able to wait that long to open the bottle …. 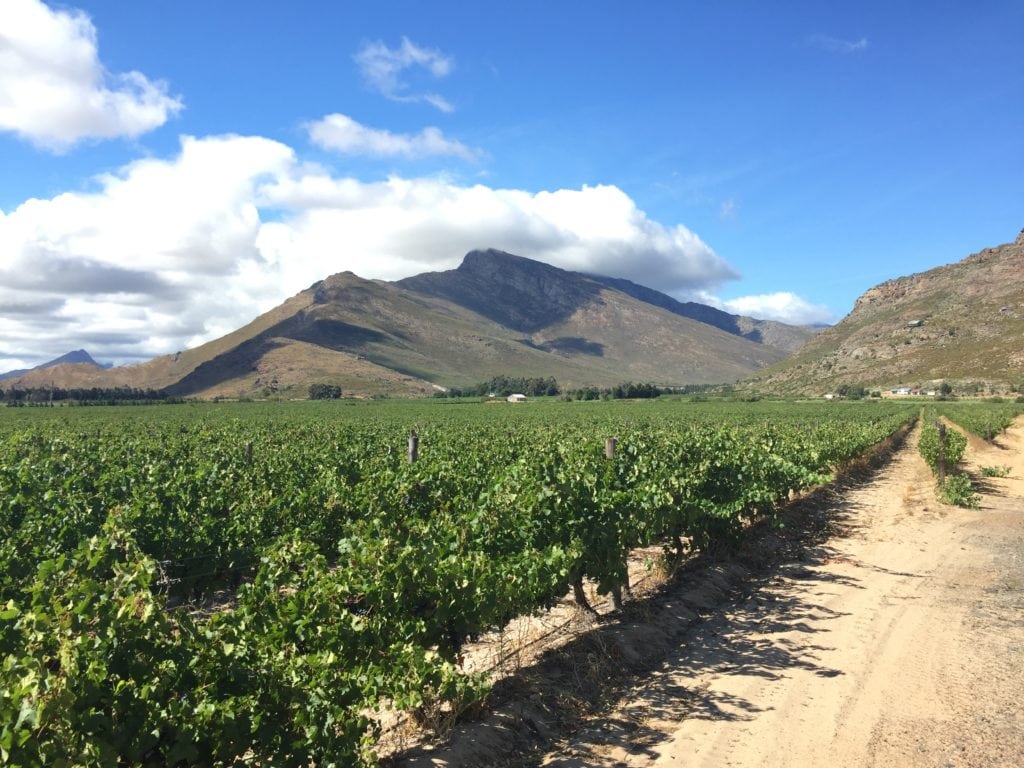