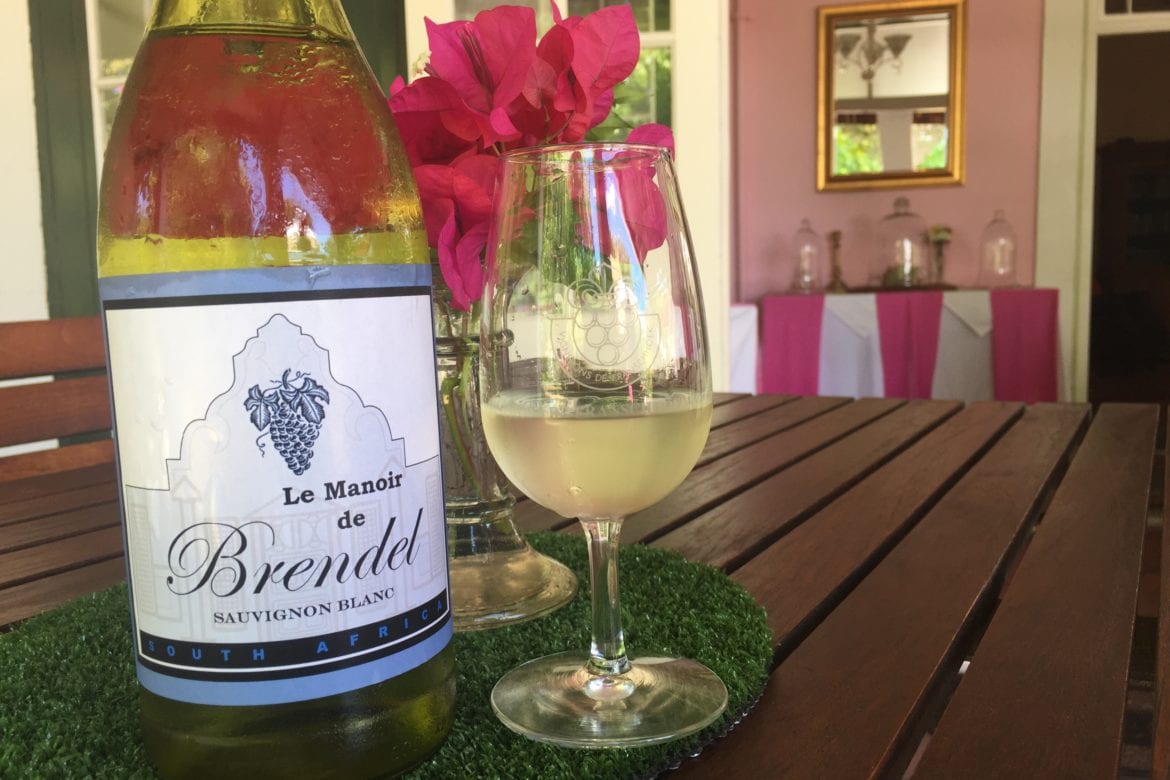 The tasting at Le Manoir de Brendel was unlike any other. I have written this before but such is the joy, uniqueness and variety of the South African wine industry and its wineries. Barely a kilometre to the South of Môreson, on the R45 just 5 minutes from Franschhoek centre, it made sense to visit Le Manoir en route my return to Cape Town. I always enjoy promoting the smaller and lesser known wine farms and so a tasting made double sense. The simple entrance and dirt road through vines gave little clue to the delight that was ahead. 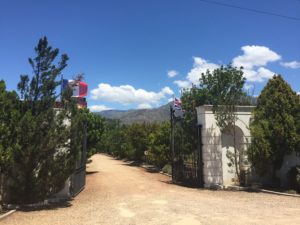 The term ‘boutique’ wine estate is loosely used and has no legal definition. That’s according to SAWIS, the industry body that collects/disseminates information and which administers the Wine of Origin classification system. The South African Trilingual Wine Industry dictionary (yes, it does exist!) defines a boutique winery as ‘high quality wine of limited quantities made available by a small winery under their own label’. Committed buyers ‘will pay large sums of money because of their desirability and rarity’. 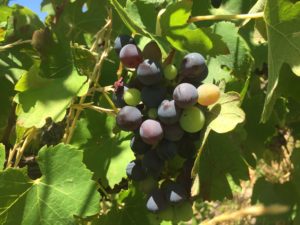 Elsewhere, according to wine and spirit merchants Norman Goodfellows, anything up to a maximum of 2,000 cases of 6 bottles is considered boutique in South Africa. I do not know the annual production of Le Manoir but the family-owned estate nestles in 30 hectares of land that contains 23 hectares of vineyards. The big name cultivars of Sauvignon Blanc. Chardonnay, Chenin Blanc, Sémillon, Cabernet Sauvignon, Pinotage, Merlot and Shiraz are all grown and harvested by hand. Approximately 80% of the wine produced is red. There’s even a kilometre walking trail through the vineyards. 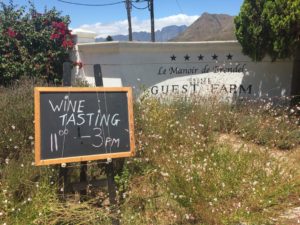 Le Manoir is owned by German proprietors Christian and Maren Brendel, hence the name. ‘Boutique’ is no clearer a word when it comes to describe a hotel or guest house. They tend to be: small but with big personality; individual and independent; have modern décor, country designer or a quirky touch; be rich in local flavour and character; offer ultra-personal service; be full of spirit; and focus on food and drink. 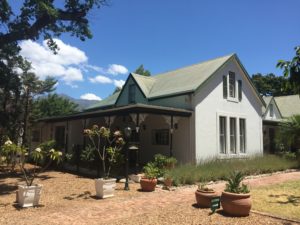 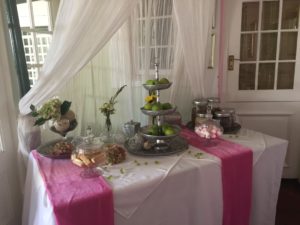 The 5-star Guest House certainly lived up to this billing. I parked beside the main house beneath shady trees and was met by Charmaine at the entrance. The décor of the Victorian property was classic, tidy country house, with orange colour-coordinated cushions and curtains, plenty of mirrors and local pictures on the walls, traditional armchair seating, and with ornaments and trinkets on every surface. Shocking pink was another primary colour, both in the entrance hall and on the stoep at the rear where Siviwe hosted my tasting. Matching pink bougainvillea `flowers’ were set in vases on every table. 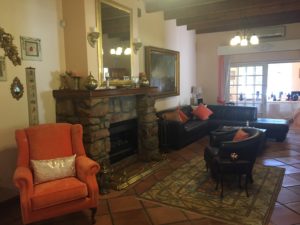 Siviwe served a cut glass bowl of peanuts and jug of water for the tasting. This was more boutique guest house than boutique wine estate as, hungry and tempted as I was by the nuts, I know that their bitterness and oiliness can play havoc with a wine tasting. Meanwhile, and as I was looking out towards the Klein Drakenstein mountains in the Franshhoek Valley in the distance, I could see the swimming pool and tennis court for guests from the raised viewpoint at the rear of the building. 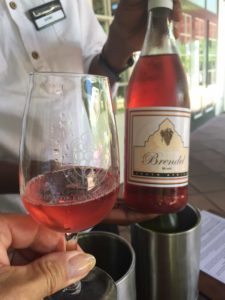 A non-vintage Rosé was the first wine of the tasting (R40 for 5 wines). It was a rich deep salmon to amber in colour and showed a slight effervescence as the screw cap was opened. The wine had a very strawberry bouquet, with simple raspberry aromas to match, and was off-dry on the palate. The exit at the finish was of dry almonds and short. I wondered after what cultivars the wine was made from but I was unable to find out. 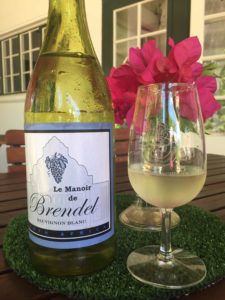 I rated the Sauvignon Blanc, the only white wine of the tasting, equally. The wine was atypical of many a Sauvignon Blanc. The acidity was moderate and the nose, whilst shy to start, was towards the Chenin Blanc end of the spectrum, less the honey and stone fruit aromas. I detected melon, lime, guava and green fig on the nose. 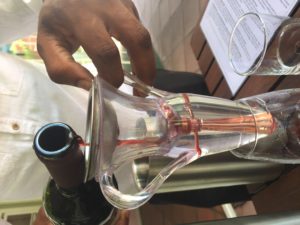 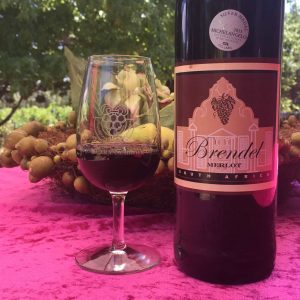 The first 3 red wines were all of 2006 vintage which is rare for a tasting. All the bottles were opened anew, also unusual, and Siviwe used an amphora-shaped aerator to pour each one together with a strainer to catch any sediment. The Merlot was of a dry style, with smooth silky tannins that just held on at the finish. I liked the warm fruity nose of red fruits, cassis, cedar and pencil shavings. I bought a bottle. 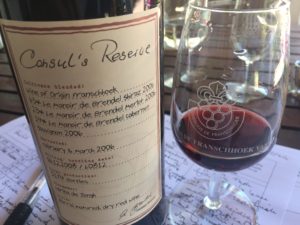 I could taste the Merlot in the Consul’s Blend even though it was Shiraz-led (63%). This was another smooth medium- to full-bodied wine in lighter style in which integrated tannins allowed the fruit flavours to hold on at the finish. The bouquet was fruit-forwards, predictably more complex than the single cultivar Merlot, and with spicy Shiraz undertones. 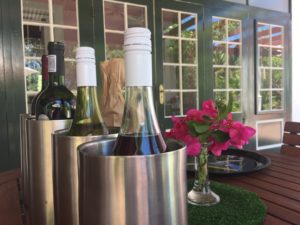 I learned as Siviwe prepared my next wine that the guest house offers 10 individually-decorated, luxury bedrooms and a Family Cottage. Most guests, unsurprisingly given the German owners, are from Germany with other foreign guests coming from the United Kingdom and the USA. Le Manoir is perfectly suited for weddings too in the ever-popular Franschhoek, offering a romantic chapel, garden gazebo and Cellar Barn or marquee for up to 60-70 guests. 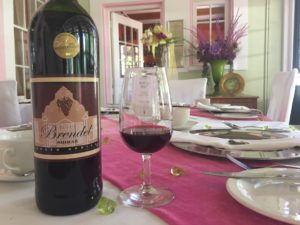 I bought a bottle of the Shiraz too which was my favourite wine of the tasting. The paler rim of the wine, more deep ruby than purple in colour, gave clue to its age. Fruity dark berry Shiraz aromas balanced well the good black pepper spiciness on the nose. Silky tannins were ultra-delicate but provided just enough grip for a subtle and effective finish and aftertaste. 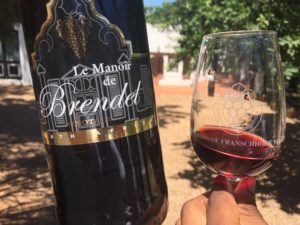 The Pinotage was an unusual garnet colour, reminiscent of aged red wines, with a luscious bouquet without any of the juiciness or acetone aromas often associated with the cultivar. I wondered whether ageing had removed them to leave an inviting mix of oaky black plum and dark cherry on the nose. Smooth but prominent tannins matched the restrained fruit flavours on the palate for a decent finish. 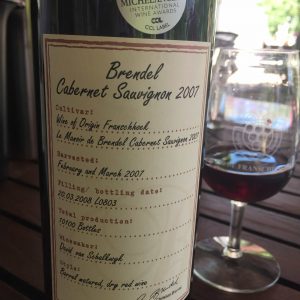 Cabernet Sauvignon was the final wine of the tasting and another wine more than 10 years old. It too showed its age by its garnet rather than ruby colour. I liked the soft but distinctive and intense plum, blackberry and forest floor aromas. The tannins were classic Cabernet Sauvignon – drying and grippy yet silky – to leave a moderate aftertaste. 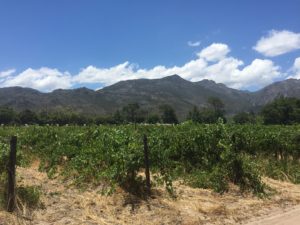 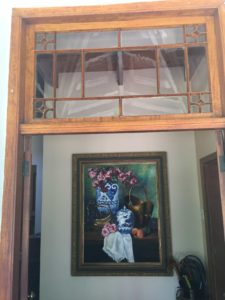 Le Manoir de Brendel lived up to its billing as a boutique guest house by its individuality, chic quirkiness, luxury accommodation, personal attention, and wines served from its own vineyard. The country guest house feel was very clear and it punched well above its weight. Siviwe was polite and attentive even though his immediate knowledge of the wines was little more than the useful handout. The red wines were much older than is customary at a wine tasting. Indeed, they reminded of High Constantia that too could be considered a boutique wine estate and where, intriguingly and coincidentally, tasting is also carried out on a rear stoep. 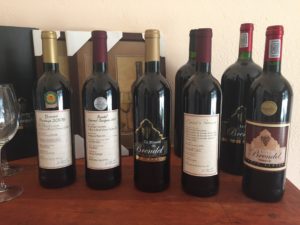 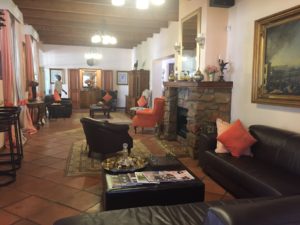 I noticed when I returned home that the Merlot and Shiraz bottle were without the labels that showed their vintage so I shall have to arrange to obtain. It gives excuse to sample the peanuts too …. 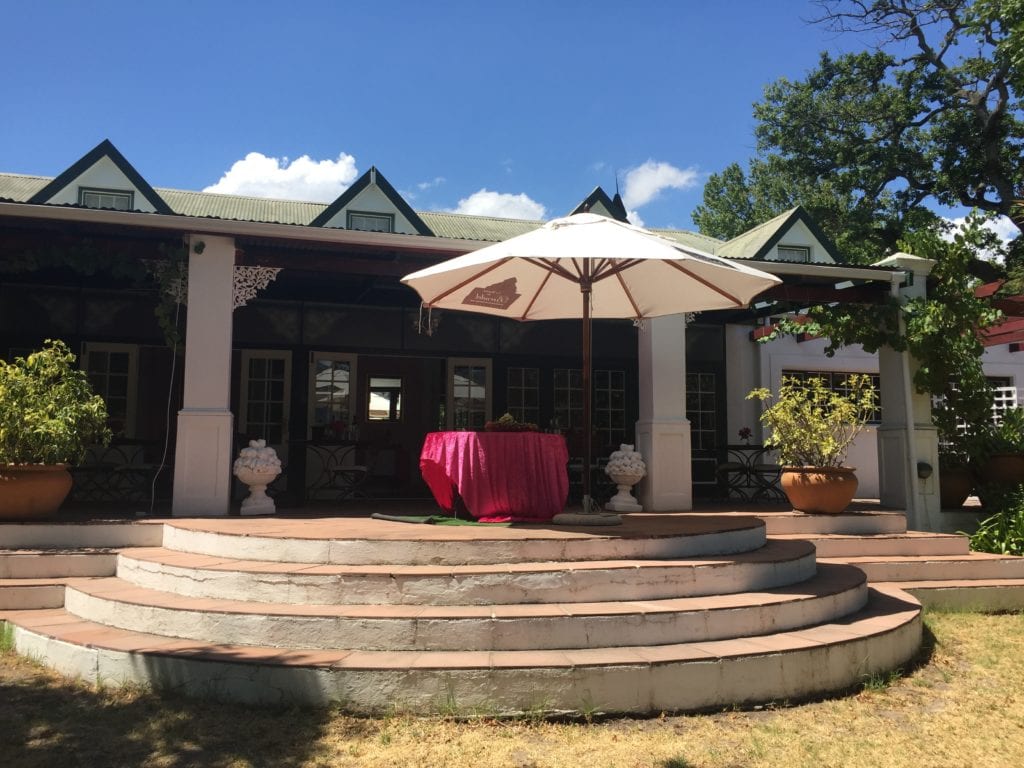