Bellville to Bellevue to Belle Wines 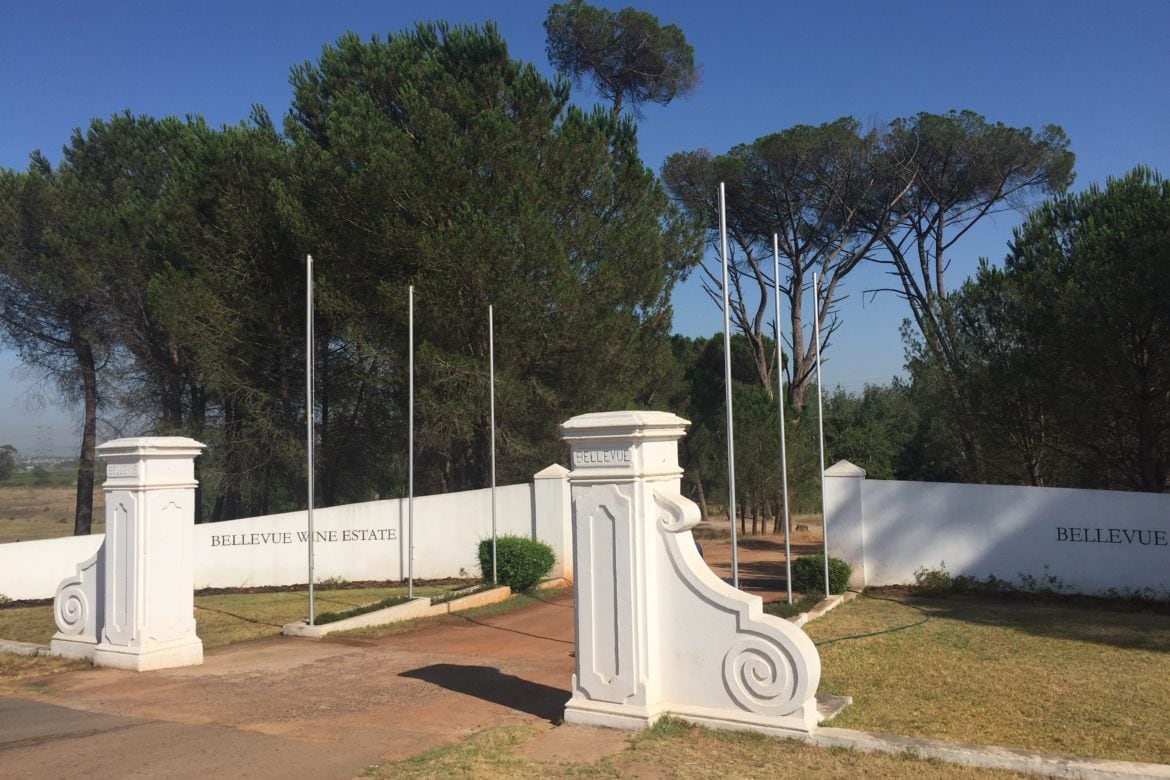 If it wasn’t for Instagram I would not have visited Bellevue today. I am sure I would have done sooner or later but the social media presence caught my eye. Besides, I had not visited the Bottleray Road area to the North-West of Stellenbosch for tasting before. It made sense to combine the two. 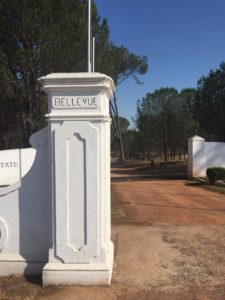 I decided to avoid the early N1/N2 rush hour and took a cross-country route via Bellville. My decision paid off and I was little held up by commuter traffic. It surprised after living in Cape Town for over 6 years that I had not travelled this road before. No sooner than I was thinking how drab the cement-faced ‘cookie cutter’ apartment houses looked, huddled together beneath ugly electricity pylons marching across the veld and seemingly dropped onto wasteland with an equally drab concrete wall around, did I suddenly leave them behind to emerge amid luscious green vineyards. 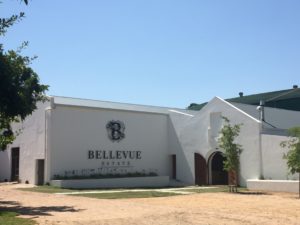 Bellevue was easy to find with its impressive and unusual double entrance gate. The rough gravel road over a cattle grid led past barrels giving direction to the Tasting Room. At the critical point, where I should have turned right into a fenced enclosure, the signage vanished. As a result, I took a self-guided impromptu tour via the vineyards, a private house and worker’s village until a phone call re-directed me to where I needed to be. 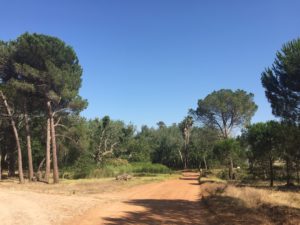 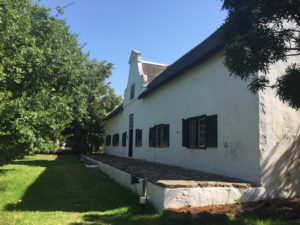 Bellevue is a historic property complete with 17th century signal cannon set on the lawn in front of the restored 1803 Cape Dutch homestead. The estate has been in the Morkel family since 1861. The original owner, Philip Morkel, was of German descent. He arrived in Cape Town by ship and married a South African woman, became a ‘Free Burger’ (citizen), and established the family lineage here. The land was originally farmland with some vines but it was not until the early 1950s when P K Morkel replanted the estate with many of the vines that remain today. 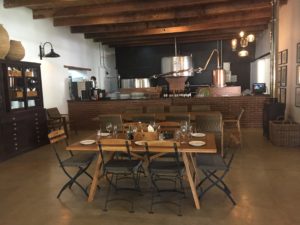 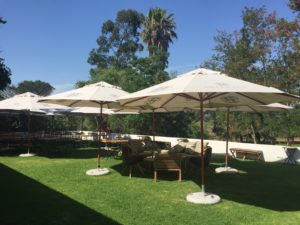 Ancient meets modern in the Tasting Room that was opened in December 2016 in a converted wine cellar. The space is open and well laid out, with wines displayed on wooden shelving behind the bar counter, an inviting brandy and gin distillery at the end opposite the entrance, and wide doors opening out into a shady garden with extra seating. There’s a restaurant too and I began to regret having had breakfast before leaving home. 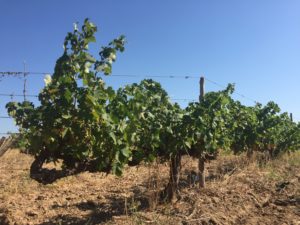 Josh was my polite, smiling and attentive tasting host and I was fortunate later to meet 4th generation owner Dirkie Morkel who was interested in my opinion of his wines. The Tasting fee is R40 for 5 wines but somehow I managed to taste the Bellevue selection. The estate grows 11 cultivars (mostly reds) on 152 hectares of the 291 hectare property. Many of the vines are over 40 years old, including some of the oldest blocks of Cinsault (1952), Pinotage (1953) and Chenin Blanc (1976) in the country. Unsurprisingly, the tasting selection contained some special and interesting wines. 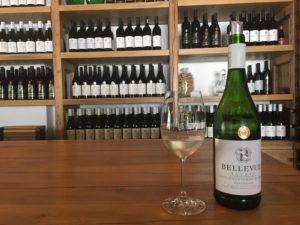 The Sauvignon Blanc was the first of 3 white wines I tasted. Made in fruity style, there were leafy herb and green pepper notes beneath the fresh citrus lemon, grapefruit, litchi and passion fruit aromas to give the wine a good intensity. I liked the bright but not brash acidity and clean mouth feel. The finish was shorter than I would have preferred but this was after all a steal at R60 per bottle. 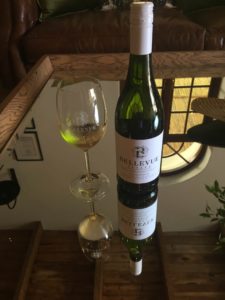 The unwooded Chardonnay was even greater value (R45) and a wine I rated higher – and so it was a ‘no brainer’ to buy a bottle. This was simple, easy drinking Chardonnay, with unfussy lemon, apple and litchi flavours unadorned by oak. The acidity was positive to leave a smooth, creamy texture on the palate. 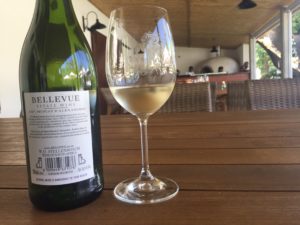 Dirkie was intrigued by my impressions of the Muscat D’Alexandrie. It was certainly a striking and unusual wine, one of those where the nose and palate do not match. The sweet and very fruity bouquet was full of ripe apricots, litchi, raisins and grapes. Served in a black ‘blind’ tasting glass and I might have thought the wine was a Noble Late Harvest, possibly either a Viognier (though there wasn’t the typical white pear or jasmine of the cultivar) or a Gewürztraminer (not quite, as there were insufficient rose floral notes). The fruitiness fell away on the palate that was clean and bone dry with moderate acidity. Pear and geranium lingered at the finish. I was unsure, Dirkie perhaps too, whether the wine offered the ‘best of both’ worlds of playful, apparent sweet wine with a serious, dry mouthfeel, or ‘fell between 2 stools’ to appeal to neither novice nor connoisseur wine drinker. It would certainly pair well with a Thai or Indian spice dish or even smoked salmon. I suggested considering making a prosecco-style sparkling wine that are certainly the rage in the UK and Europe at the moment but yet to be made in any degree in South Africa. It would fill a gap in the wine range too. 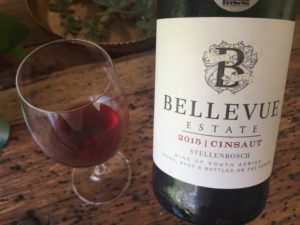 The tasting turned to the serious business of the red wines. I bought a bottle of the Cinsault, a cultivar is one parent of Pinotage (the other being Pinot Noir) and that has to large extent been eclipsed by Pinotage. Common in Languedoc, France, Morocco and Lebanon, it was long used as a blending grape. Made from 65-year old vines, expect to see more of the variety in South Africa in the future as it has good drought-resistant properties. It makes an elegant Pinot Noir-like wine, slightly sweeter and without as much spice and is generally unwooded. I liked the sweet cherry and raspberry flavours and low acidity. It was served slightly chilled too that made for a light and refreshing dry wine. 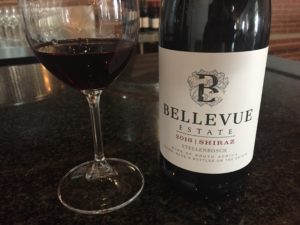 The Shiraz was made in lighter than usual style – being just full-bodied with purple ruby tinge – and showed delicate aromas of spicy white peppercorn, fruity blackberry and blackcurrant on the nose. There were none of the perfumed violet notes that would mark it out as a cool climate Shiraz. This was an ‘easy-drinking’ Shiraz. 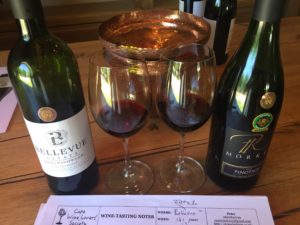 Pinotage is a cultivar that, like comics, I tend to either like or hate. There’s little middle ground. I tasted the Estate and PK Morkel Pinotage side by side to compare. Their origins and making were not the same: the Estate wine came from 22 year old vines and matured for 12 months in American oak, whilst the PK Morkel wine was made from the oldest, 65 year old vines and kept in French oak. They were quite different in appearance and taste. 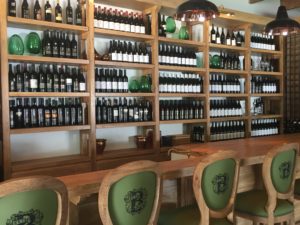 The Estate wine was a classic Pinotage in appearance and nose: fruit-driven with a heady 14.5% alcohol, with juicy notes of red plum and black cherry, with slight spice and hints of banana and acetone. It surprised on the palate being lighter in feel than I expected. The American oak gave sweetness to the wine that made it almost Pinot Noir-like in character. 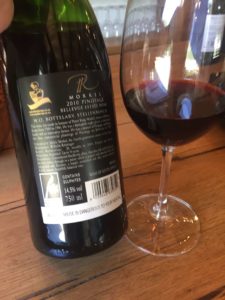 The PK Morkel wine was totally different. Dusty, dusky aromas of plum, cherry and graphite gave it an almost ‘Burgundian’ Old World character. The 2010 vintage was developing well as the tannins were balanced, smooth and integrated. I liked it and I am sure it will improve with age. 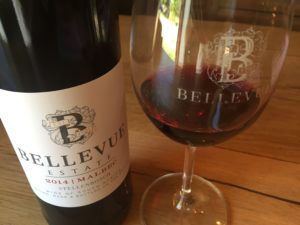 Malbec, another favourite minor cultivar of mine, was my final wine for tasting. Argentina’s best known grape, it is grown in small amounts in South Africa (0.5% by area) and, like Cinsault, becoming increasingly popular as a single variety interest wine. Warmer climate Malbecs have a defining ‘blueberry’ smell that I was able to detect alongside bitter cherry, redcurrant, buchu and mint. The wine was a great medium ruby colour, just full-bodied, with average acidity and soft light tannins. This was another bottle I could not resist buying. 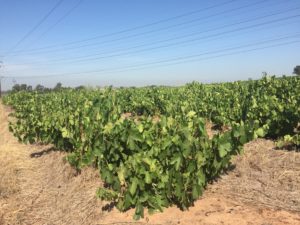 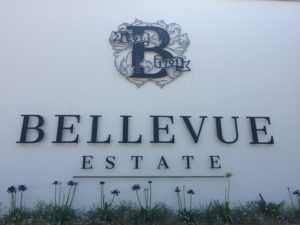 Bellevue, with its historic roots and ancient vines, was another of those estates that I had little heard of before and whose wines I cannot remember if ever I had tasted. Such is the power of social media. The wine portfolio was varied and interesting, with wines to suit a range of tastes, palates and prices (white wines especially). They were honestly and well made too. It did not surprise to learn that the Restaurant and Tasting Room are busy at weekends as the location is equally suited to people living in Stellenbosch or on the East side of Cape Town. I would certainly travel from the Southern Suburbs to taste again. Oh, and I wish Dirkie well with the Muscat D’Alexandrie …. 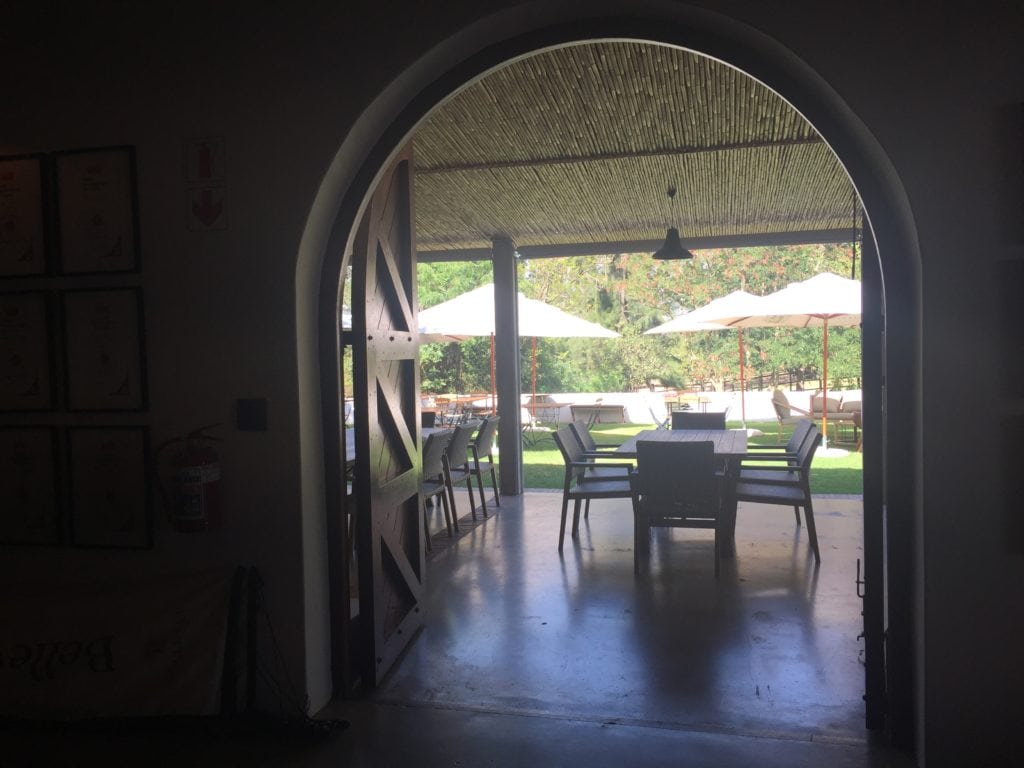