Home/Experience 4.0/Saxenburg Puts Heart, Mind and Soul into Its Wines

Saxenburg Puts Heart, Mind and Soul into Its Wines 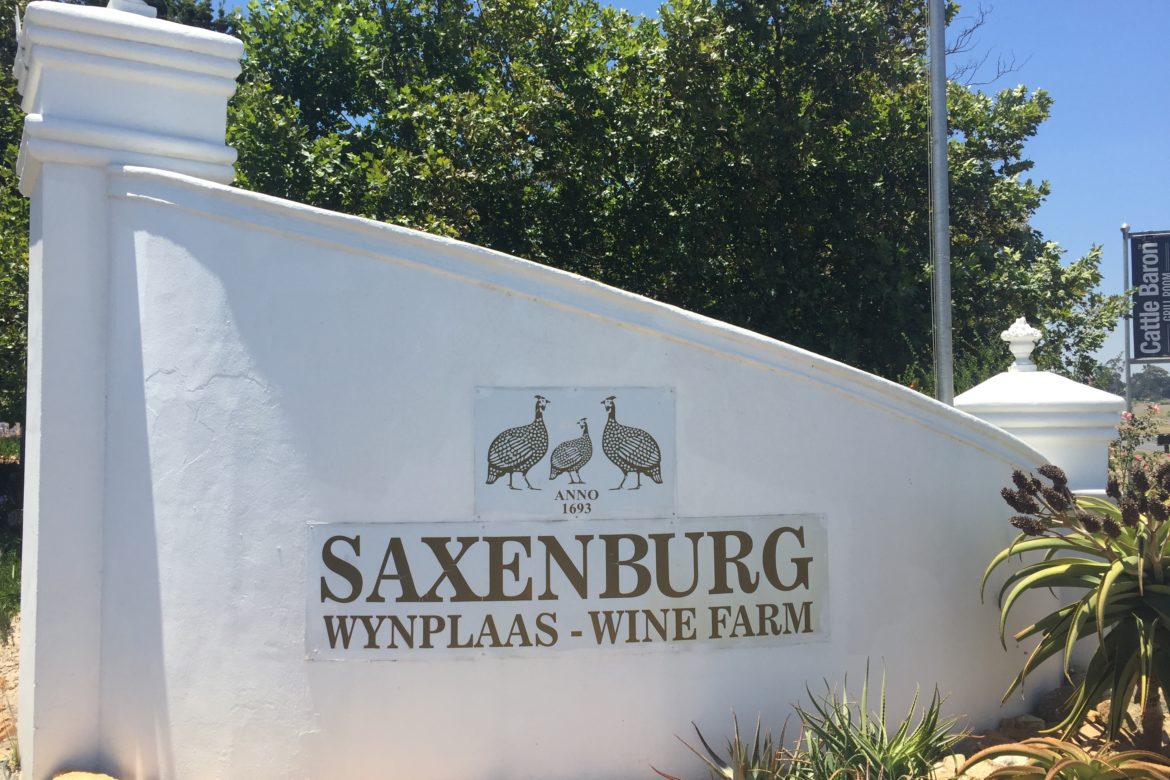 The vineyards are closely packed along the Polkadraai Road to the West of Stellenbosch. Saxenburg is one of the most Western of them and should have been my fourth and final wine tasting of the day but, unfortunately, Nico van der Merwe was closed for the afternoon. I had tasted a sample of 4 Saxenburg wines at the Vineyard Hotel, Newlands, Cape Town in August last year and wanted ever since to taste them in the winery in which they were made. Today was to be my day. 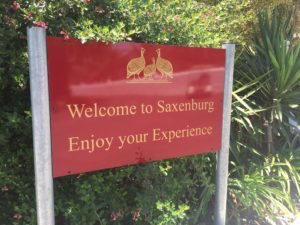 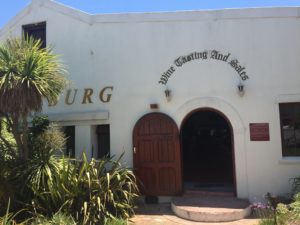 It was fitting that I returned on the day I had seen tarentaal in the fields en route to Boschkloof Wines where I tasted first before visiting Mulderbosch after. It was surprising then for a farm that prides itself on tradition that the Guinea Fowl Restaurant is no more. However good, Cattle Baron Grill Room doesn’t have quite the same cachet. Nonetheless, the Saxenburg branding logo of 3 Guinea fowls remains: one for a heart that beats with passion to make the finest wine each year; the second for the mind, to keep the heart in check and to make the best decisions; and the third, for the soul that keeps knowledge and passion together. 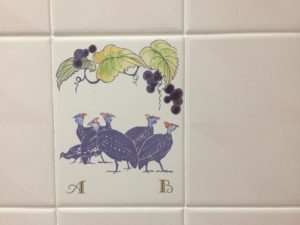 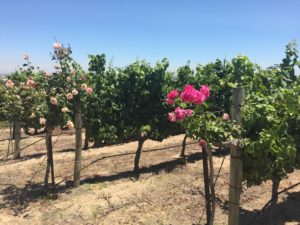 The bold gold-lettered entrance led to a drive passing burgeoning vines with traditional pest-indicator red and pink roses at the end of each row. I parked and then walked along a rising path beside a whitewashed wall with herbaceous borders to reach the unassuming Tasting Room. Inside, the décor was simple and functional, perhaps not what I expected from a historic estate dating back to 1693 when Governor Simon van der Stel granted land to Joachim Sax, a free Burger from Germany, who first planted vines in 1701. Twelve years later, Olaff and Albertus Berg took ownership of the property – hence the name today of ‘Saxenburg’. 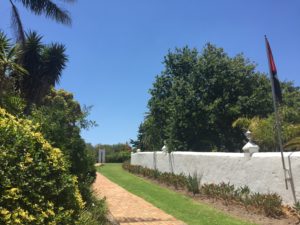 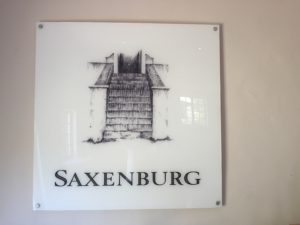 Saxenburg, like Eikendal Vineyards to the South of Stellenbosch, has Swiss owners. The Bührer family bought the property more than 20 years ago and manage the business with the help of their children, Fiona and Vincent. The farm is famed for its Shiraz, for which the terroir especially suits. A wide range of other noble and traditional cultivars are grown on 85 hectares of the 195 hectare estate, including Cabernet Sauvignon, Cabernet Franc, Malbec, Merlot, Pinotage, Chardonnay, Chenin Blanc, Sauvignon Blanc and Viognier. Unsurprisingly, reds make up the majority (80%) of the wines produced. Of these, 70% is Shiraz. 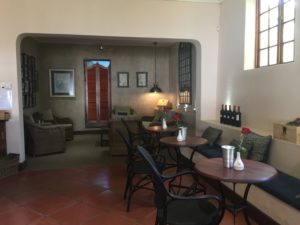 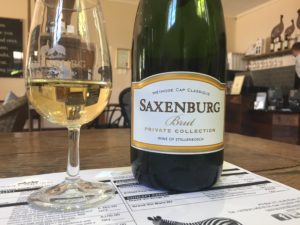 I chose the Private Collection tasting (6 wines for R50, waived on purchases above R250) and began with the Brut MCC that I had sampled before in Cape Town. I suspect the bottle had been open for a while (it was almost empty) and that it was not at its best as there were few bubbles in the glass. Those bubbles that were there quickly disappeared. Bubbles in MCC/Champagne hold most of the aromas but I was able to detect lemon and apple notes beneath a yeasty and biscuity presence, developed from 36 months on the lees. The MCC disappointed on the palate, being lightweight and short in the finish. Reading back over my initial post, where I commented on a fresh and lively wine, this too may have been due to the serving condition. 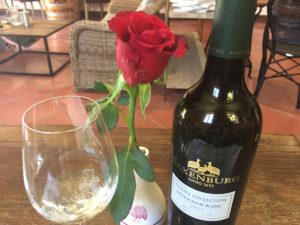 The Sauvignon Blanc was released just 2 months ago and showed brightness in appearance and character. It was made in the warmer fruity style with notes of papaya, passion fruit, guava and grapefruit. Dry and with good acidity it too, like the MCC, was short on the palate. 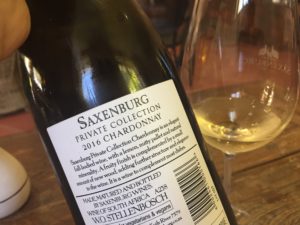 In contrast, the Chardonnay was my favourite wine of the tasting. Moderately oaked (10 months in 20% new French barrels), woody vanilla and caramel notes complemented rather than overpowered apple, tangerine and citrus lemon in the bouquet. This elegant balance extended to the palate where the aromas and acidity matched for a creamy, full mouthfeel and an extended aftertaste. 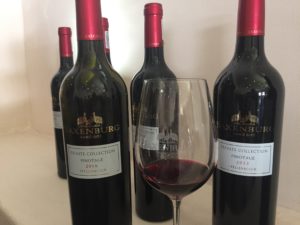 The Pinotage, my first for the day, was medium in body with typical purple tinge. It was lighter on the palate than most to show classic juicy, jammy plum and dark cherry flavours. The oak was closed and spiky as is so often the case for young Pinotage (2016) and needs rounding to improve. 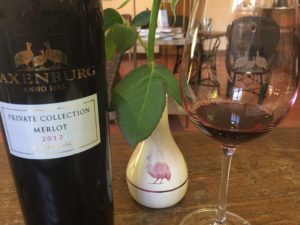 Single cultivar Merlot, Cabernet Sauvignon and Shiraz wines followed with rising price to R200 a bottle. I liked most the Merlot, unusually poured using an aerator as the bottle was newly opened. This was stereotypical Merlot with forwards, earthy, cedar, cassis aromas with a good intensity albeit of average complexity. Slightly chilled, the pleasant serving temperature did not dull the strength of flavour on the palate that showed a smoothness befitting of its older vintage. It warmed my mouth to hint at more than the stated 13.5% level of alcohol. 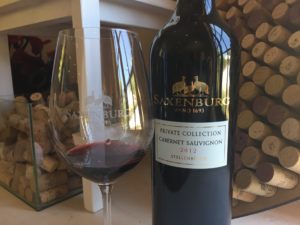 My favourite wine of the limited previous tasting was the Cabernet Sauvignon. This wine too was a classic, being bright and forwards on the nose with delicious and inviting red and dark berry fruits. It was already smooth on the palate but, like the Pinotage, needs ageing to develop and open fully. 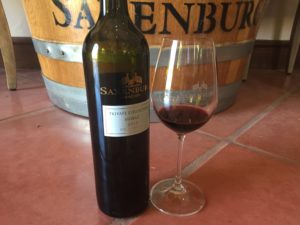 Last was the Shiraz, the wine of Saxenburg reputation. Intriguingly and interestingly, Syrah (the same cultivar) was the signature grape variety at Boschkloof just a few kilometres away. I pass comment as I had always considered the Stellenbosch region to be famed for superb Cabernet Sauvignon rather than Shiraz/Syrah. I rated this wine highly too as it scored well on appearance, the nose and palate. Forward ripe fruits of cassis, blackberry and spices showed a good intensity that followed through to merge with silky tannins in the mouth that lingered after. 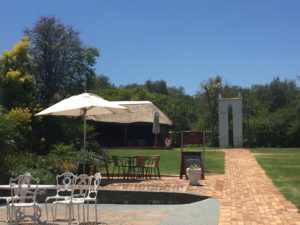 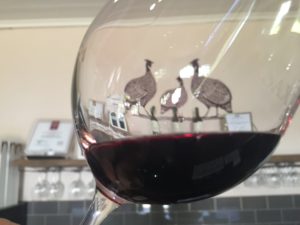 Saxenburg produces decent if not exceptional wines. The visit to the wine farm reinforced my earlier tasting conclusions that always reassures. Some wines were better than others and that is to be expected. I like the focus on single cultivar wines and the honesty in their making. New plantings of 22 hectares of Sauvignon Blanc, Chardonnay, Cabernet Sauvignon and Shiraz are planned over the next 5 years so the focus on these grape varieties will continue. Meanwhile, Saxenburg puts its heart, mind and soul into its wines …. 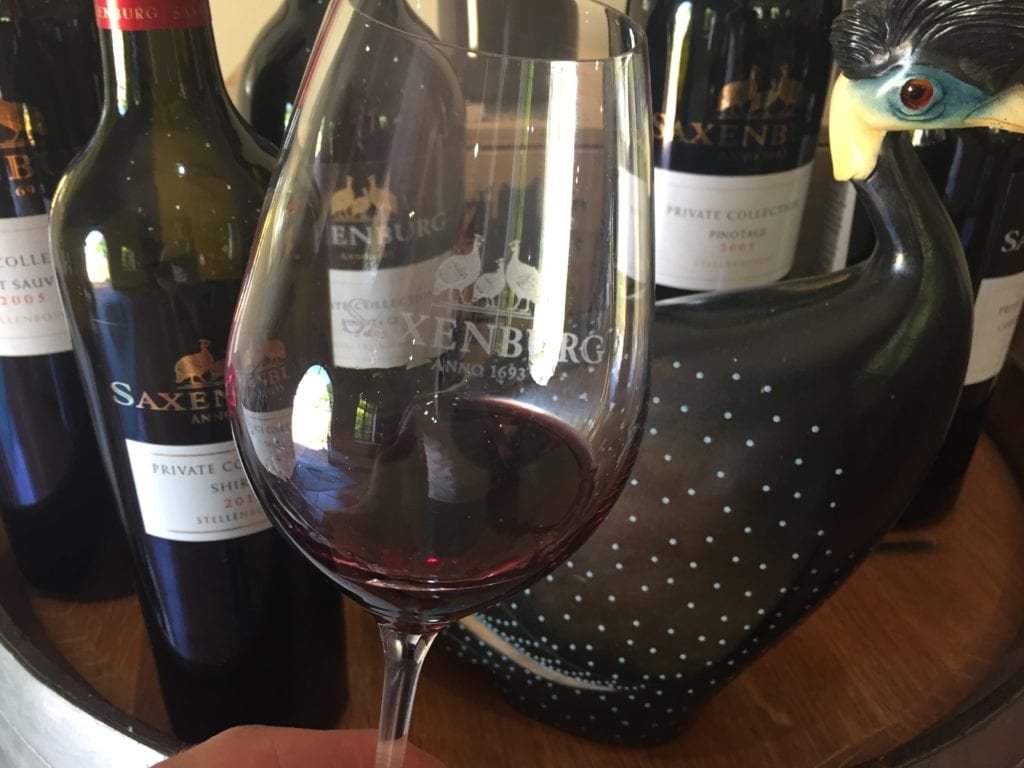