Perfection is Attainable at Boschkloof Wines 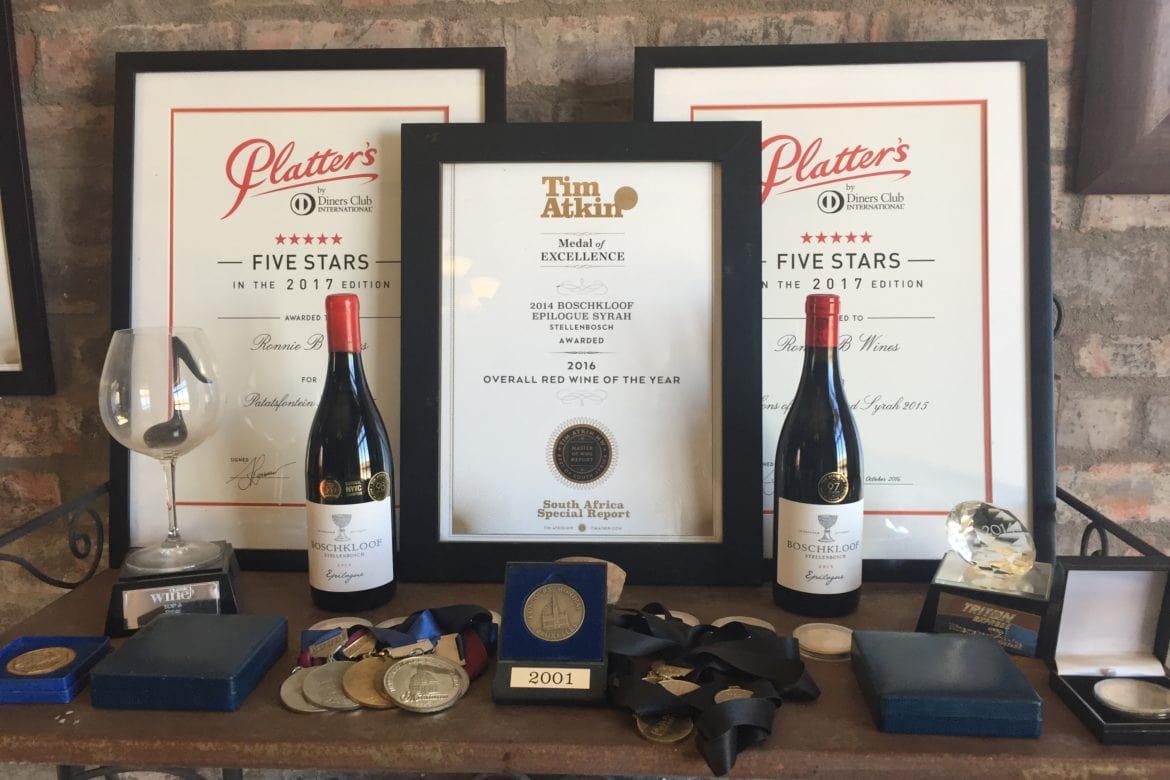 The tarentaal in the fields beside the road and sign for La Provence gave clue that I was West of Stellenbosch. It’s where Afrikaans meets France even though I was some way off from Franschhoek. Workers toiled in the fields along the Polkadraai Road past the Strawberry Farm where I picked a few years ago. I hadn’t been to the area before for wine tasting and prompted to do so from my return route home after visits to Canto Wines, Signal Gun Wines and Groot Phesantekraal before Christmas. As with all roads leading North, East, South or West from the ‘city of oaks’, there were plenty of vineyards to choose between. It was a welcome dilemma after a tasting break over the festive and New Year season save for an intriguing sampling of fruit wines at Linga in Malawi. 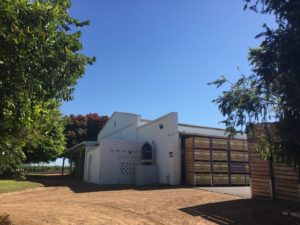 Boschkloof was easy to find and very quiet at 9.00 in the morning. I parked besides the unassuming Cellar building with orchard pallets stacked high outside that reminded me of the approach to Paul Cluver in the Elgin Valley. The Tasting Room was larger than expected from the outside. I was the first to arrive – and solo throughout my visit – and so was fortunate to have the full attention of Elisma, my tasting host. I opted for the Standard Tasting of 2 white and 4 red wines (R50, waived on bottle purchase). 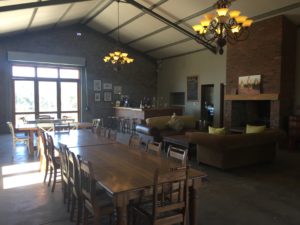 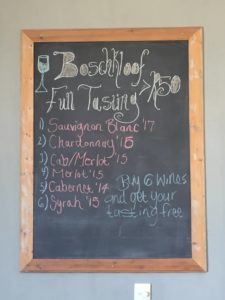 As I waited, I realised I knew very little about Boschkloof. Indeed, I cannot recall ever tasting one of their wines. Much of the wine is sold overseas so that in part explains. It nonetheless came as a surprise – and a pleasant one at that – to read from one of the framed press articles on the wall that Boschkloof was the first South African red wine producer to earn 98 points from Tim Atkin (the 2014 Syrah Epilogue). 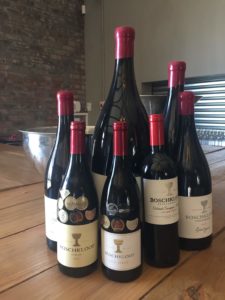 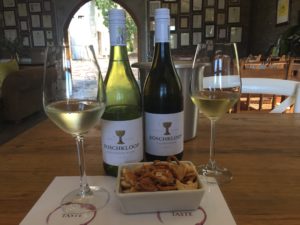 The 2 white wines showed their class. I favoured the Sauvignon Blanc, made from grapes sourced from Vergelegen as the Stellenbosch area is too hot for the cultivar, over the Chardonnay but only slightly so. A 2017 vintage, it was lively but not too so and with a green rather than a tropical character. Bitter lemon, green pepper, kiwi and grapefruit aromas filled my nose that followed through to a clean and fresh palate with vibrant acidity. The wine made an excellent start to the tasting day. In comparison, the Chardonnay showed a smoother mouthfeel aided by 12 months in 80% wooded oak. The medium yellow appearance gave clue to the oak maturation that was reinforced by dominant vanilla and butterscotch aromas that almost masked subtle apple and citrus notes beneath. The acidity was firm without being bracing. I would have liked a longer finish on the palate. 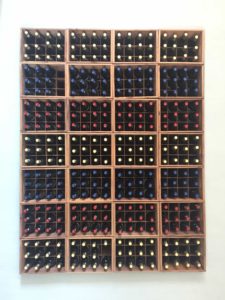 Boschkloof is known for its red wines. Some 90% of the 30 hectare farm (19 hectares under vine) is planted with Cabernet Sauvignon, Cabernet Franc, Merlot and Shiraz, together with some Chardonnay. As if on cue, the UB40 song ‘Red Red Wine’ started to play as I tasted the first red wine – the Cabernet-led Cabernet Sauvignon/Merlot. It was served chilled and slightly below room temperature (as were all the reds) which made it refreshing without dumbing the bouquet. I liked the ripe fruity but not juicy aromas of berries and currants that showed moderate complexity. The palate showed its youth from the coarse, green tannins that were out of balance with the fruit flavours. 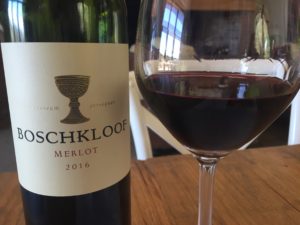 The Merlot, sporting a new label to show the Borman family crest and made with similar 18 months maturation in old French oak, was similar in character. Paler deep ruby and full-bodied, the wine showed average complexity of redcurrant, cassis and tart red cherry aromas. Again, closed olive tannins hid much of the fruit flavours. 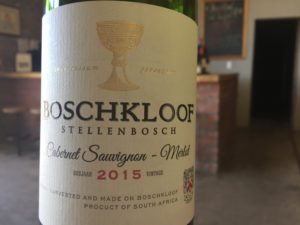 The Cabernet Sauvignon, in contrast, was my favourite wine. A 2014 vintage, made from 37 year-old vines, and matured for 22 months in the barrel, this was a classic Stellenbosch example of the cultivar. Deep ruby and full bodied, delicious and heady (14.5% alcohol) aromas of dark mulberry, blackberry fruit aromas filled the bouquet. The tannins were much more restrained than those of the 2 previous wines and in balance. I bought a bottle. 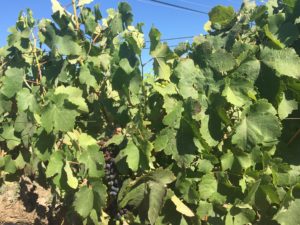 I learned whilst tasting that owner and veteran winemaker Jacques Borman started the boutique winery in 1996. The small scale of the farm allows a personal involvement of the vine growing and in the cellar where Jacques is aided (since 2010) by winemaker son Reenen. Mixed lime-rich soils overlaying deeper clay, shale and gravel combine give a French style of terroir together with the Mediterranean climate of hot summer temperatures and cooling night time ocean breezes. Selected ‘shy’ French and South African clones, moderate drip irrigation, open trellising and low vigour combine to produce below average yields and for optimal grape quality. 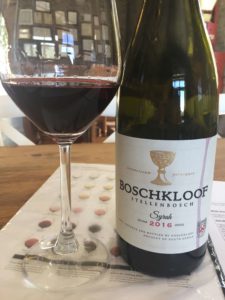 I tasted the Syrah next that likewise showed its class. It did not surprise that Jacques was the Winemaker at La Motte from 1985 to 2003. The wine was a deep ruby to purple in colour and had an intriguing, inviting and unusual lead smoky aroma. Beneath emerged a great complexity of mulberry, cassis, violet, clove and soft black peppercorn spice bouquet. The wine was elegant and smooth on the palate with good balance. The Old World style showed in a lightness of weight that could have held on a little longer at the finish. 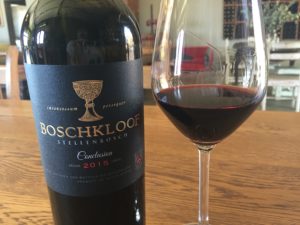 The formal part of the tasting was over but I was privileged to be able to taste 4 more wines that were part of the owner’s private collection and ‘not for tasting’ but left over from a special tasting held on the previous day. I rated both of the next 2 reds a rare high 19/20 overall score and 9/10 for personal preference, above even my favoured Cabernet Sauvignon. The Conclusion 20, a Bordeaux-style blend, oozed ripe Cabernet fruit aromas and a heady 15% alcohol on the nose. Whilst relatively young (a 2015 vintage), the wine was smooth and open, balanced well and with a lingering finish. I liked the French-style, almost cool climate, character. 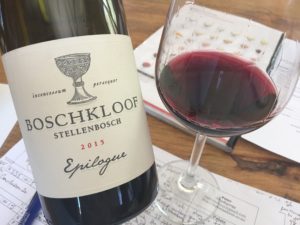 I was fortunate to taste the 2015 Epilogue, son of the 98-point vintage, as it was sold out. Made from French-cloned (SH99) Syrah grapes from a single block and aged in French oak for 20 months, it was reminiscent of the ‘tasting’ Syrah with similar dark berry and blackcurrant smokiness together with delicious perfumed violets. It was smooth and refined on the palate to make for another excellent wine. 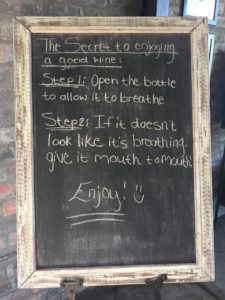 The Kottabos Range is made from grapes sourced from a neighbour’s vine and, as Elisma explained, ‘a project of exploration by the winemaker’. I rated both wines, with their distinctive graphic Greek labels, equally highly. Kottabos is an ancient 5th and 4th centuries BC sloppy Greek game that involved flinging wine lees at targets whilst uttering the name of the object of affection. Fortunately, it has yet to catch on in 21st century South Africa. I digress. 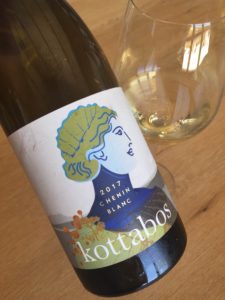 The Chenin Blanc, one of only 1598 bottles made, was deep straw in colour to give hint of light oak maturation. The wine was aromatic and vibrant on the nose, showing a decent complexity of honeyed apricots, ripe lemon, almond kernel and naartjie. The acidity was smooth and just right, with good balance, to hold on for a pronounced finish. 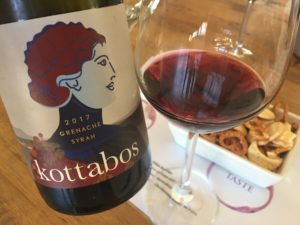 The final Kottabos wine was a blend of Grenache (78%) and Syrah. I would have bought a bottle (of 3216 produced) if only I could for the wine combined 2 of my favourite cultivars. The medium body and medium ruby appearance invited the strawberry, red cherry and white peppercorn spice nose. I liked the tight but clean and smooth mouthfeel, together with the refreshing but not too demanding acidity and prominent length. 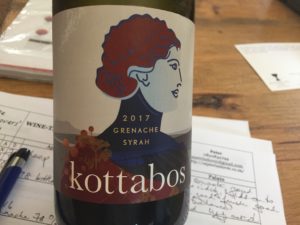 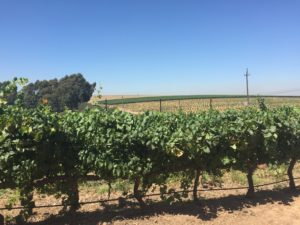 Boschkloof was a hidden gem and very much of a tasting surprise. There’s an obvious focus on making wines from a few cultivars and a clear attention to fine detail from viticulture to viniculture that combine for some excellent wines, many of which are very reasonably priced for their quality. The vineyard may not have the cachet of multi-generation family ownership or historic legacy or ancient Cape Dutch buildings but, as ever for me, the proof in the glass is in the winemaking. 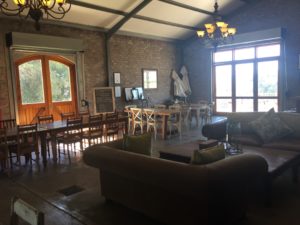 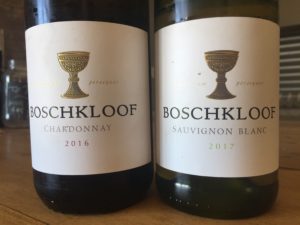 The Boschkloof bottle labels, classic in appearance, show the sacred vessel of the Holy Grail that reportedly contained the wine that was drank at the Last Supper. I tried, badly, to revert to my schoolboy Latin to translate the phrase ‘inconcessum persequor’ that flanks the Holy Grail on the design. It means ‘I pursue the unattainable’ and reflects winemaker Jacques Borman’s pursuit to perfect the art of winemaking. From today’s tasting, I reckon that Jacques need have no worries in his quest and is very well on the way there …. 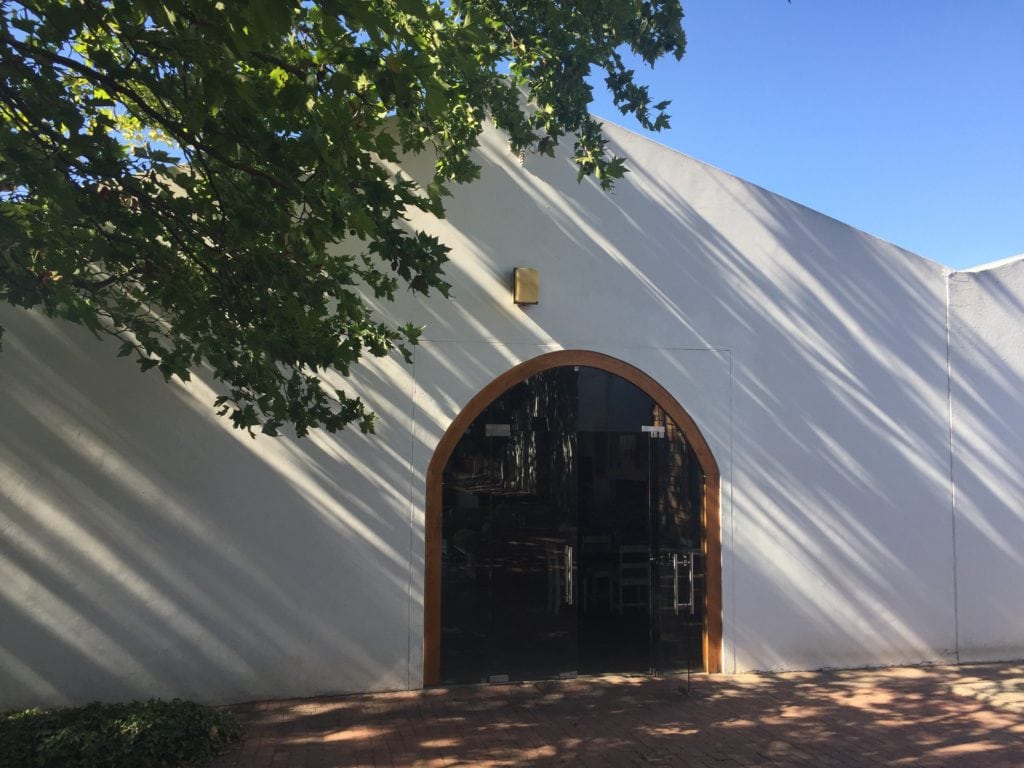