Linga-ring in a Winery in Malawi 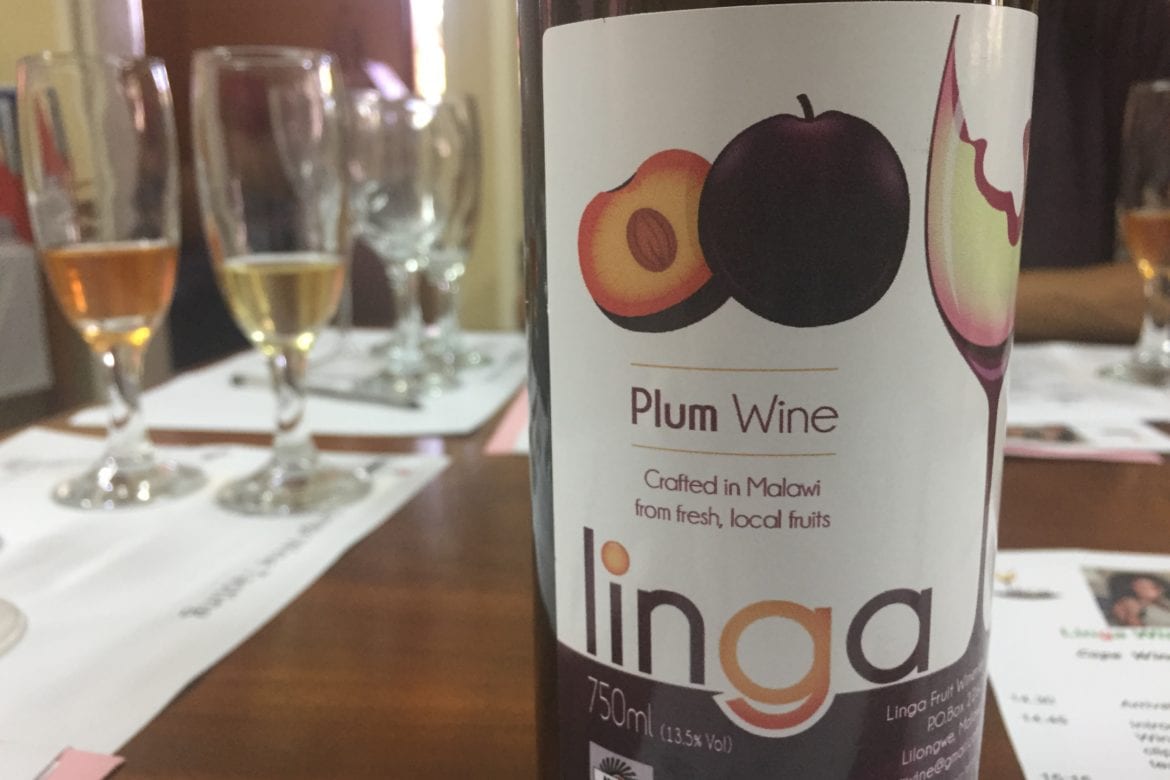 Margaret seemed quite disappointed to hear that I had found out about Linga Fruit Wines from a Google search for ‘Malawi wine’. Coming from South Africa to Malawi for the first time, I didn’t quite know what else she expected as I had not heard of or seen Linga before. The important thing for me was that I had discovered a winery in Malawi to visit. It was the last day of my holiday and I had swapped several useful emails with Margaret before leaving Cape Town. 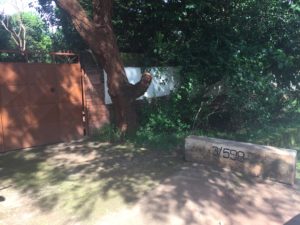 The directions from the emails were necessary for otherwise I would never have found. The tourist booklets for Malawi and for the capital, Lilongwe, little mention Linga Wines and it is not shown on any map, or their website which gives a postal address only on the Enquiry Form. Surprisingly, and perhaps for privacy reasons, there’s not a sign to Linga Wines en route or even on the gate of the property that is set in a suburb West of the city centre. Nonetheless, I managed to find house `3/598’ at the appointed time in the middle of the afternoon on New Year’s Day. 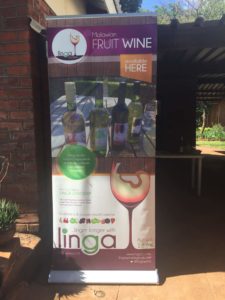 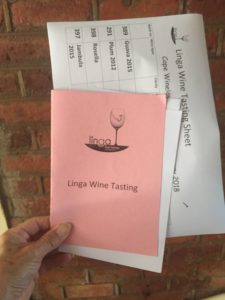 Margaret welcomed me into her leafy sunny home and I was soon to discover that this was to be no ordinary wine tasting. Not only was there a mix of family and friends invited but there was a detailed programme too:

Margaret introduced me to her Malawian husband, Dr Tim Ngwira, an analytical chemist by profession and hobby winemaker since 1978. In many ways, they make an unlikely couple. Margaret speaks with a strong accent that cannot but fail to hide her Scottish beginnings. She hails from Lennoxtown, some 20 miles North of Glasgow. A trained librarian, she came to Malawi as part of the British Voluntary Service Overseas programme in 1968. She met Tim a year later and was married a year after that. 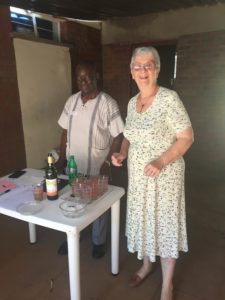 She poured a welcome spritzer made from White Peach fruit wine and lemonade as I waited for the other guests to arrive. “2 to 1 mix and ice made with boiled water”, she said that was typical of her precision and engaging generosity. Soon after, and introductions completed, we all moved to the lapa in the garden towards the rear of the enclosed property on the edge of the city. Tea and Christmas cake (my sole taste of the season) were the order of the day as Tim explained the history of and background to Linga Wines. 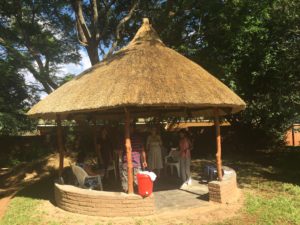 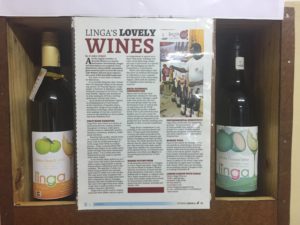 Hobby became business in 2006 with over 20,000 litres of 8 wines now being made annually using local fruits, including some even from trees in the garden. The ‘wines’ all contained a regular 13.5% alcohol (or so) and take up to 5 years to mature. The key message, as we watched the “When in Malawi …” video and other media clips, is not to compare Linga wines with conventional wine but, instead, “just try it”. The wines are made from fruits – mulberry, plum, hibiscus, rosella, guava, peach, strawberry and jambula – sourced from local farmers who gain a much needed income from the business. Tim has tried other fruit sources too (mango, apple, papaya) but they did not work as well. 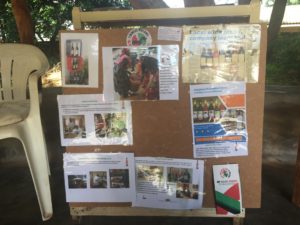 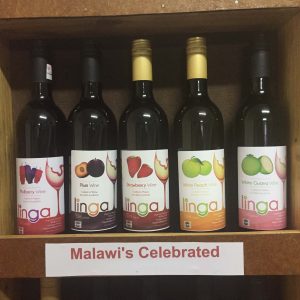 The wines are sold in local Malawi wine stores and airports, also in Zimbabwe, the US and the United Kingdom. South Africa, so far, has been a market difficult to enter. I learned that the name ‘Linga’ has several apt origins and uses. It means ‘fortress’ in Chichewa (the majority language in Malawi) ‘as in Chateau’, as Tim explained. Linga is also the name of the village in Kasungu in the Central Region that Tim’s mother came from. It lends itself easily too to the branding to ‘linga longer’ with the fruit wines. 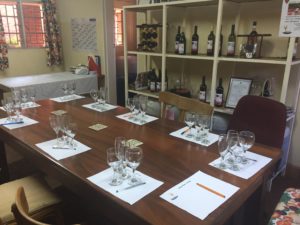 We moved to the Tasting Room set out with typical Margaret librarian neatness and attention to detail, with Tasting Note sheets, pens and glasses set on the old wooden table. Tim explained the seasonality and ripening period for each fruit in turn. There was no chance for the ‘flying winemaker’ here as each fruit matured at a different month throughout the year. 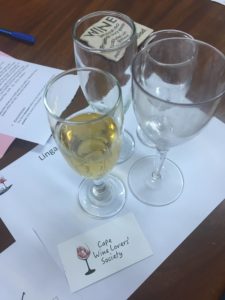 We began with the Guava wine. Deep gold in colour, I soon found out how challenging it was to use all my normal aroma and taste descriptors for a wine that was unlike anything I had experienced before. The aroma was decidedly fruity – but which fruits? There was a caramel and sherry like character that was very powerful. Beneath, I struggled to describe the bouquet. There was a citrus feel of lemon, pineapple too, and of guava peel. The wine was woody, earthy and over-ripe on the palate – quite a shock to the taste buds! The palate matched the nose with both having a very fortified wine style. 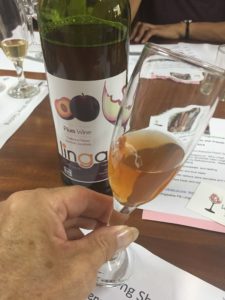 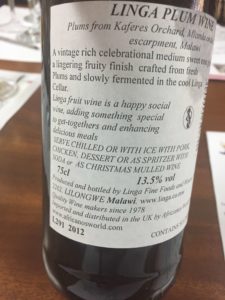 Next was the Plum which was medium amber to onion skin in colour and with hints of secondary fermentation on pouring. Fruity and nutty on the nose, there were ripe cherry and dark plum aromas from the glass. Semi-sweet, like the Guava, it had a fuller and more alcoholic feel on the palate and with greater length. 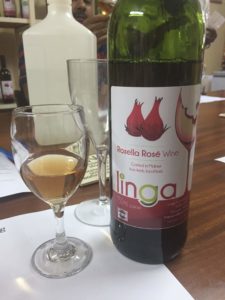 I tried reminding myself not to taste and analyse as a conventional wine but the approach is so engrained that it was difficult to move away from. Besides, columns for Clarity, Bouquet, Sweetness and Rating were provided on the Tasting Sheet. The Rosella, or Rosé, was made from the sepals of the Hibiscus flower. Lighter in colour than the Plum, it was medium gold to medium brown in colour. I was sensing a pattern of style. The fruit wines were very sherry-like in character and colour, full to syrupy in mouthfeel and with a caramel, nutty, ripe, alcoholic nose. I picked out fruity flavours of ripe strawberry and raspberry, together with nutty amarula, earthy mushroom and forest floor. 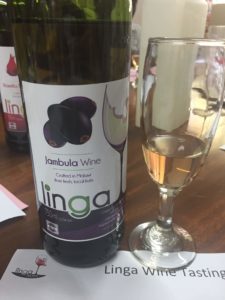 The Jambula was the last wine of the formal tasting. Onion skin to deep salmon in appearance, this wine had a more berry wine taste to it. ‘Unusual and different’, Tim announced. It was to the others but they were all different too to any other wines I had tasted. It was sweeter, smoother and with a lighter mouthfeel that I preferred to make it my favourite wine of the tasting. Flavours of date, black mulberry, malt, tomato and caramel combined for a unique combination! 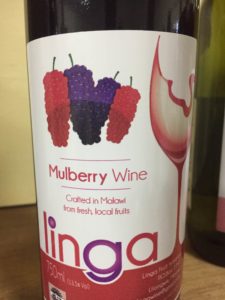 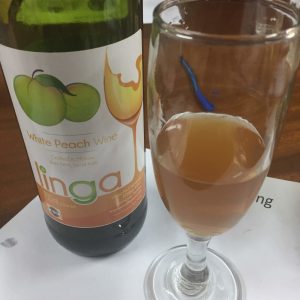 We did not taste the Strawberry but Margaret insisted I try the Mulberry wine too. It was almost Pinot Noir-like in appearance, being a deep garnet colour with brown tinges, but the same sherry like character. I tasted the White Peach wine too, without the added lemonade, which was semi-opaque and tasted of woody apricot. Peach flavours emerged on the palate for a fuller feel than the Mulberry. 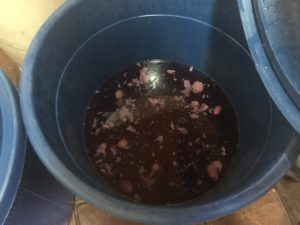 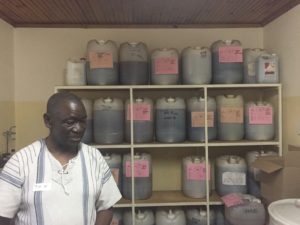 Afterwards, Tim showed me round the cellar and explained in detail during the tour how the wines are made. Fruits are sorted and cleaned on the day they arrive and put in boiling water to break down the pulp. When cooled, ‘Rapidase’ is added to break down the fruit pectins. Yeast and nutrients are added for fermentation with the juices pressed using cloth bags. White sugar is then added with the amount dependent on sweetness of the fruits used and the desired alcohol level of the end wine product. A week later, the mix is decanted into small containers or 200 litre drums. 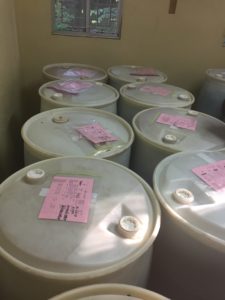 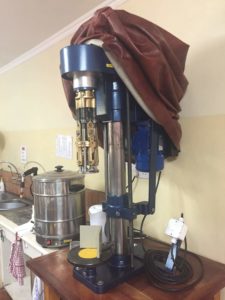 The wines are later transferred to another room where they are left to mature for at least a year. The wine is not fined or filtered but cleared by repeat racking, up to 4 to 5 times in all. The final stages involve bottling and labelling. The wines sell for around R80 which is as much as the local market can bear but gives precious little profit. 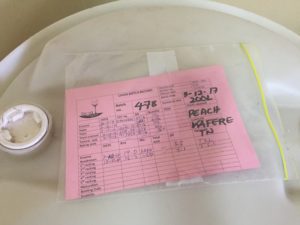 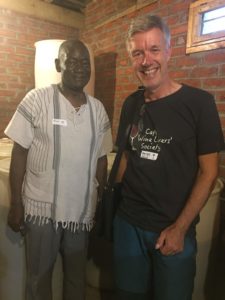 We moved to the stoep in front of the house for more tea, coffee and scones with shortbread. It gave me chance to reflect before leaving. Linga wines were unlike any other and I was unsure if the term ‘wine’ was even valid for they tasted so different. But then, I know from my English youth that wines have been made from many sources other than grapes: greengage, elderflower, rhubarb, damson, potato and nettle, for example. I read after on the website that Linga wines are “a rich beverage reminiscent of sherry or schnapps”. I hadn’t thought of schnapps as the wines did not have the burning alcohol sensation that the vodka-like fruity European schnapps has. I didn’t know though at the time that there is an American product of the same name that is lower in alcohol (15% to 20%) that is a fruit-flavoured liqueur. It makes a much better description. 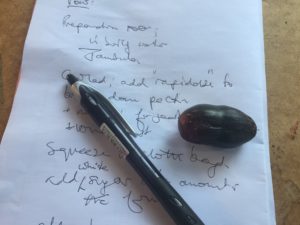 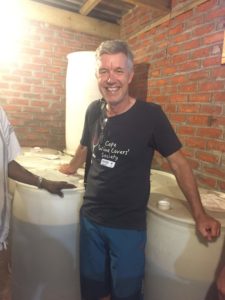 I left Linga Wines having signed the Visitor’s Book slightly after at the appointed time of 1700. The experience was utterly worthwhile and fun. It is wise not to compare Linga wines with conventional grape wines. They are so unique and different that it would be unfair to do so. The fruit wines are as much an acquired taste as any traditional wine. Didn’t we all dislike the first wines we ever tasted? All Linga wines are best served chilled, even the ‘red’ styled wines, and ice would go well with too. They make an interesting or novelty fruit drink to share on a special occasion or to mix with soda, or even plain sparkling water, to make spritzers. 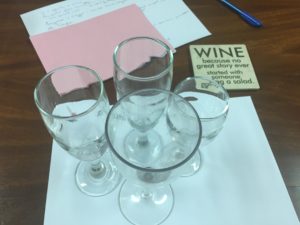 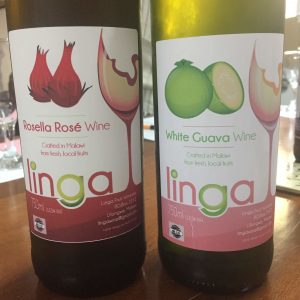 Above all, if you’re ever in Malawi, take the time to contact Margaret and Tim in advance and arrange to visit Linga Wines for a tasting. You will receive the welcome of a prince and leave fulfilled and intrigued. As they would say, “Just try them!”. 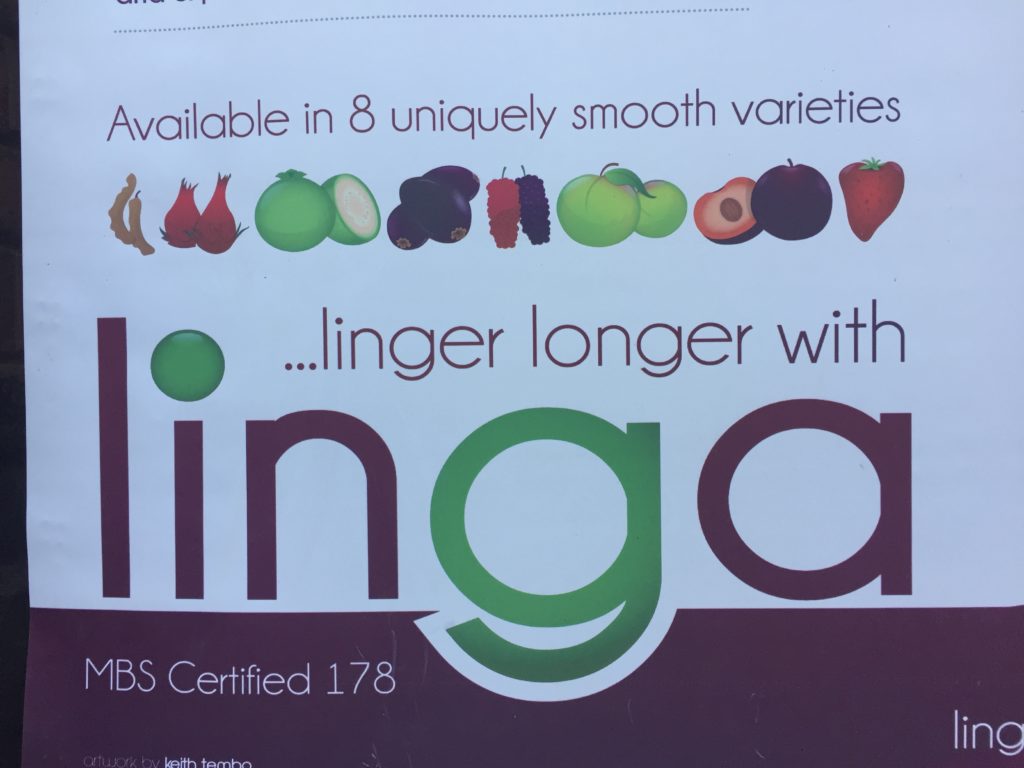