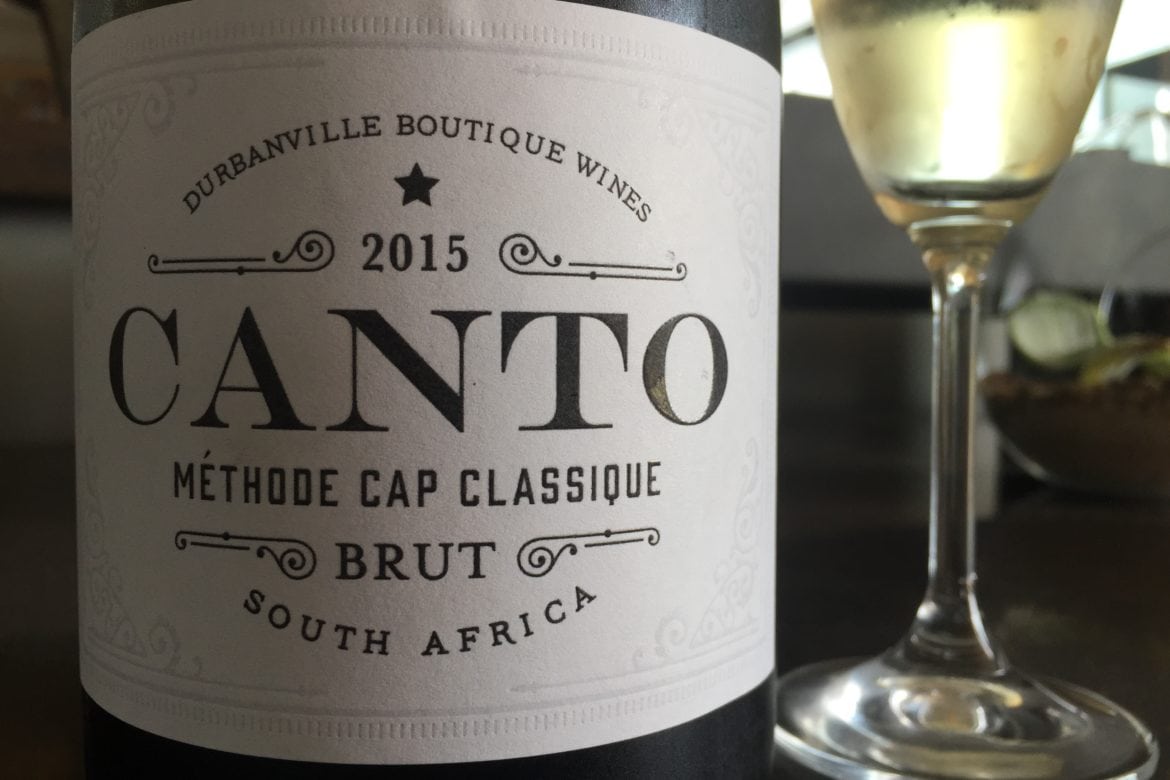 Everything was new at Canto Wines. Everything. 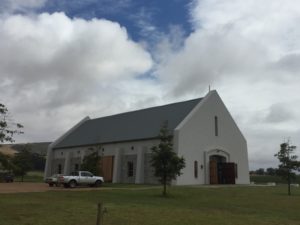 As I arrived, a staff member was polishing the glass doors on the impressive Cellar and Tasting Room building. The white painted shape, with steep roof, reminded me of Ataraxia in the Hemel-en-Aarde Valley whose Tasting building was built to look like a white chapel in the vernacular architectural style of the Overberg. 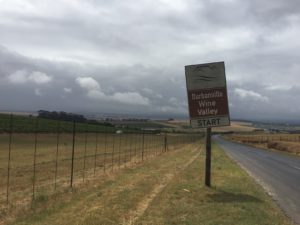 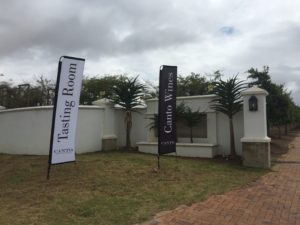 Earlier, I had left Cape Town via the N7 to turn off onto the Vissershoek Road towards Durbanville. It was a road I had not taken before, under angry grey clouds that were trying to release precious rain. The road constantly gained height over rolling slopes of drab bare wheatlands later to pass a bright patchwork of leafy green vineyards. Canto is just past the Meerendal Wine Estate and at the start of the Durbanville Wine Route. Banners in house brand colours black and white fluttered at the entrance to make the winery easy to find. 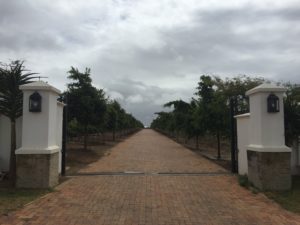 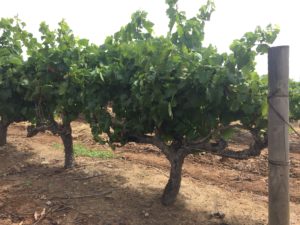 Owner Marinus Neethling bought the farm from adjacent Meerendal in 2012. Well established Chardonnay and Merlot vines grow on 18 hectares of the 22 hectare property, neatly trimmed and tidy between the wide rows. The Cellar Building was formerly a function venue for Meerendal but has been tastefully and beautifully converted for Canto. Modern meets classic, edgy meets functional, wood meets glass to make for a relaxed and appealing Tasting Room. The open Cellar, with overflow space for tasting, was being cleaned at the rear of the building. 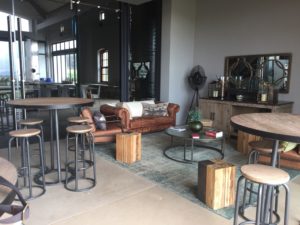 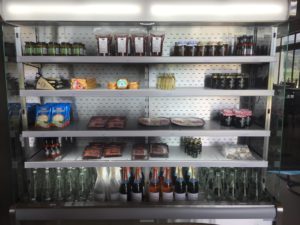 Karien was my enthusiastic tasting host. She was new too and in her second week at Canto having left Groot Phezantekraal where I was to visit at the end of the day. The Tasting Room had been open for only a few days. A well stocked deli fridge made for self selection of a cheese or meat platter or picnic on the inviting lawn outside with its spectacular panoramic views of the low hills beyond the vines. 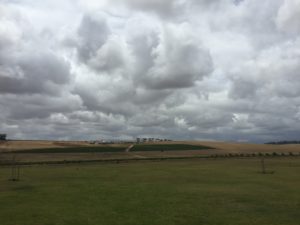 Karien explained that the name Canto – Italian for ‘lyric’ – reflects the Meerendal origin. ‘Canto is the lyric’, she said, ‘to Meerendal’s big song’. It was only last week that I tasted at another Durbanville winery, at D’Aria, that also had musical connections and name. I wondered whether the Durbanville hills were alive with the sound of vines! 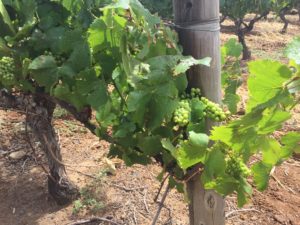 Unusually, and I was to learn that Canto does things in a distinct and different way, the first 4 (of 6) wines of the tasting were MCC. Marinus has chosen to focus the boutique winery on MCC, together with Chardonnay and Merlot from the farm. Each MCC was similarly priced (R173 to R188, though I would have simply priced all at R185 or R190), all Brut, from 2013 to 2015 vintages, and made with different cultivars. There’s always something special I feel to start a tasting with a MCC wine! 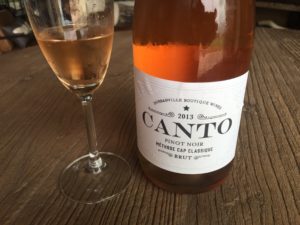 The first MCC was made from Pinot Noir which, like Chardonnay (Pinot Meunier too) is a key component of Champagne. The wine was an inviting pale salmon in colour, with tinges of onion skin orange/brown, and with a fine line of rising bubbles. It was rich in strawberry and sweet candy aromas and I noticed a slight spiciness from the Pinot Noir grape. The moussante mouthfeel was good, the flavours delicate, though they were short on the palate. 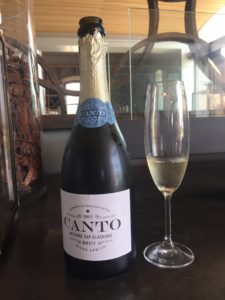 I rated the Chardonnay MCC the same as they were similar in character. Pale straw instead of salmon pink, fine bubbles gave yeasty and baked apple notes to the wine. It too was dry on the palate but weak at the finish. 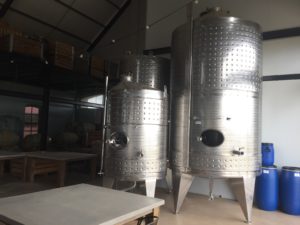 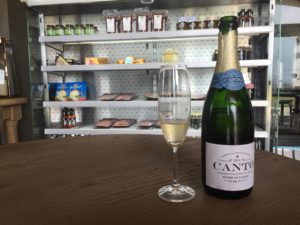 The third MCC was a Chardonnay-led combination of the 2 cultivars. I preferred it to the first 2 MCC as it was a little fruitier with extra complexity of apple, strawberry and raspberry on the nose. The fruitiness made it feel sweeter than a Brut MCC and it showed better length. 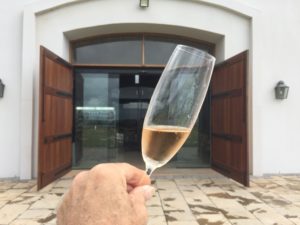 The last MCC, unusually made from Shiraz, was my favourite and my favourite wine of the tasting. Pale onion skin in colour, the complex aromas of spicy strawberry, blackcurrant, yeast and biscuit were a delight. I liked how the spiciness followed through to complement the fruit flavours in the mouth and the fine mousse. 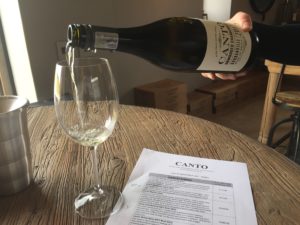 It was soon a change of glasses for the Chardonnay and Merlot. The Chardonnay is made from over-ripe grapes and is unwooded. It was a vibrant pale straw in colour and fresh and youthful to drink. There was a warmth and a complexity to the nose of baked apples, sweet lemon and gooseberry together with herbaceous aromas of green pepper beneath. It was clean on the palate, with some creaminess, with moderate acidity and an average finish. 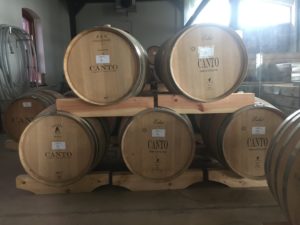 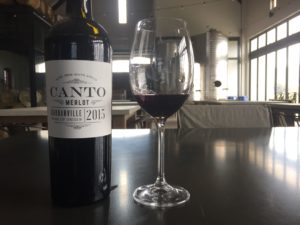 I preferred the Merlot. It was classic pale ruby and medium bodied in appearance with bright and positive red fruit aromas of ripe cassis, redcurrant, sour mulberry and red cherry. The wine had a pleasant clean, light touch on the palate with mildly astringent tannins to the fore. I bought a bottle and shall keep it a few years for the tannins to soften and age before drinking. 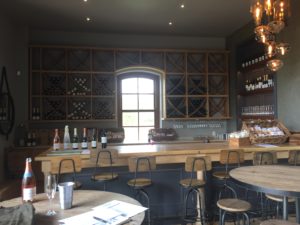 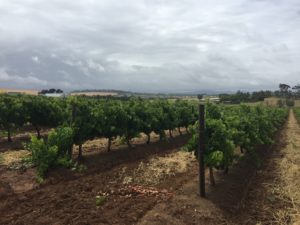 I liked Canto. The winery showed a style and a class that sets it apart from the other Durbanville vineyards I have visited. The boutique farm is neither grand nor historic like Meerendal, Diemersdal and De Grendel. There is not the ancient farm feel of Altydgedacht or the populist tourist scale of Durbanville Hills. It does not have the open, simple Tasting Room of either D’Aria or Signal Gun or even the cellar feel of Nitida. The décor is closer to that of Groot Phezantekraal. 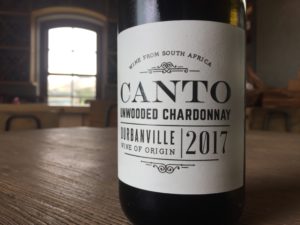 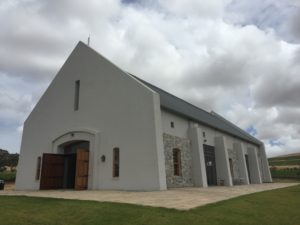 I liked how the different lyrics of Canto combined. The wine is of course what matters. The decision to focus on MCC is a bold one and it makes sense to de-risk by making Chardonnay and Merlot from vines on the property. I sense that winemaker Anneke Potgieter has licence to push boundaries – the Shiraz MCC for example – and I would like to see some experimental boutique wines made in the future. That too would set Canto apart from the other Durbanville vineyards. The wine labels were funky and different, almost hipster or craft beer in character (now there’s a thought), eye-catching too. The contemporary website aligns too. I wish the new venture well and shall certainly make a point of visiting in the future – and be sure of waxing lyrical about Canto again. 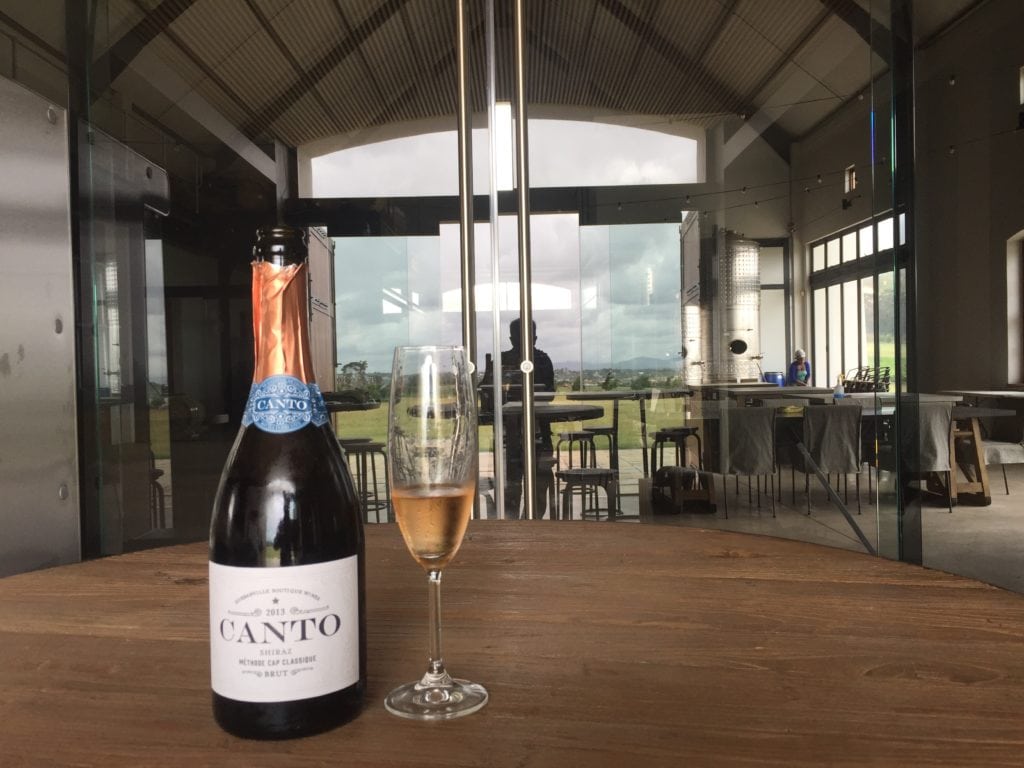