A Cracker and a Stormer at Paul Wallace 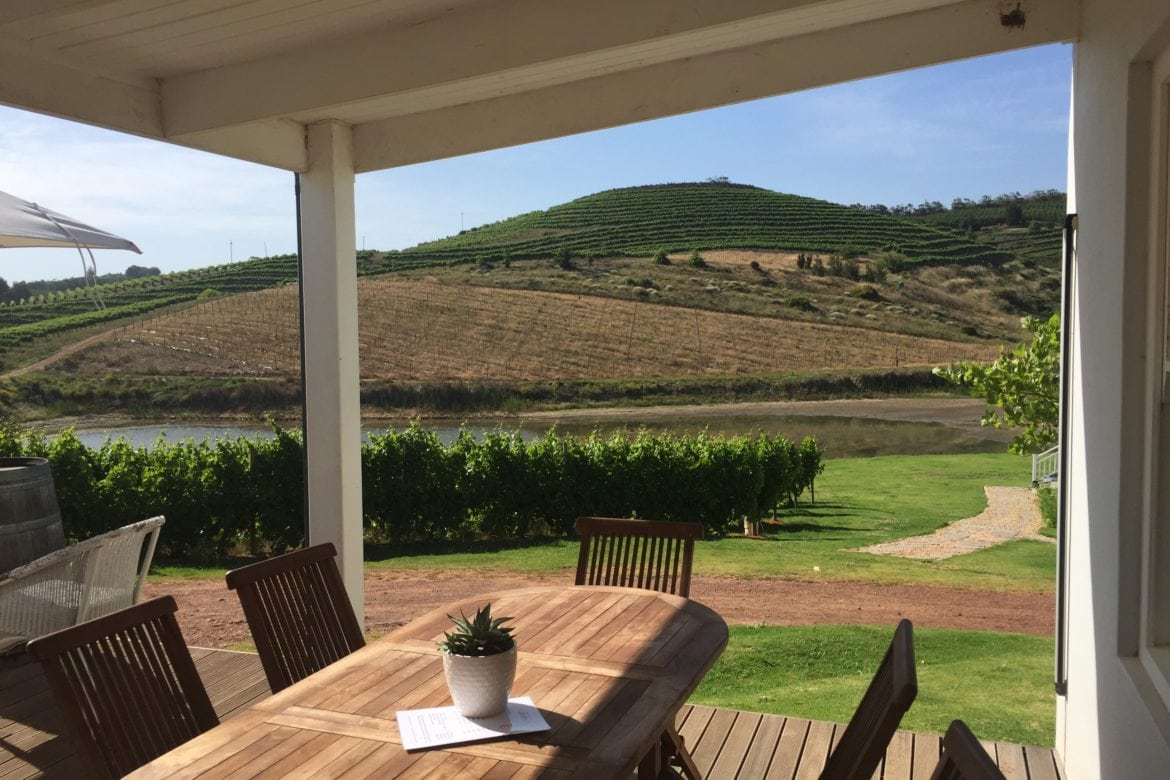 It was pure luck that I visited Paul Wallace Wines today. Co-owner Nicky had been busy all day and we had agreed to meet at another time. Tastings are generally on Saturdays or, at other times by appointment, though the farm is open for tasting mostly between 10.30am and 5.00pm over the Festive Season. A mix up with Hannay Wines meant I had time to spare at the end of my tasting day in the Elgin Valley. I called Nicky on the off chance she was at the farm. She was my wine lifesaver as I had spent a frustrating hour visiting Winter’s Ridge, listed on older versions of the Wines of Elgin map, only to find the farm closed in March 2013 to revert to fruit orchards. I had tried Elgin Vintners too but the GPS coordinates didn’t compute. Ah the frustration of the dedicated wine taster! 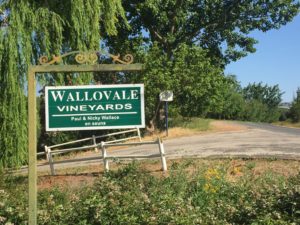 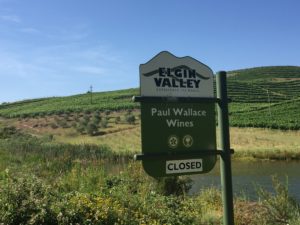 I knew where the farm was as I had already passed it en route to and from Hannay Wines, Highlands Road Estate, Oneiric Wines and South Hill Vineyards. Nonetheless, the Wallovale Vineyards sign made a feeble attempt to confuse but I soon saw the Paul Wallace Wines board in heavily branded Elgin Valley olive green and white design. Nicky explained later that Wallovale was an old name for the farm. 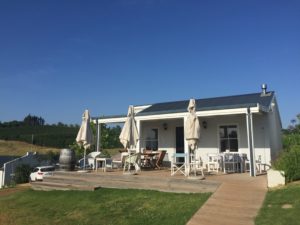 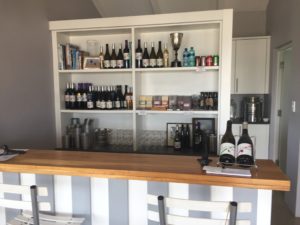 She made me most welcome in the small Tasting Room in the front room of a renovated farm worker’s cottage painted white and surrounded by others (there are 2 self-catering cottages for rent – I should love to return to stay too) overlooking a dam. The scene was peaceful and relaxing and as pretty as any in the rural Valley. 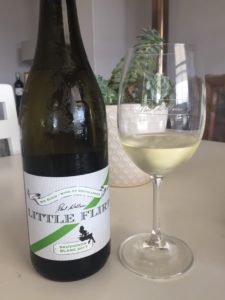 Nicky poured me the Little Flirt Sauvignon Blanc that was first released to celebrate opening of the Tasting Room in 2014. I soon learned that the cheeky name was fully in character (husband Paul is a viticultural maverick). It is always refreshing when winemaking and wine tasting is fun and without snobbery. The wine was a pale straw colour and with a nice balance of fruity and green aromas – lemon, kiwi, guava, lemongrass and green pepper – with a mineral character. I liked the clean and crisp mouthfeel. 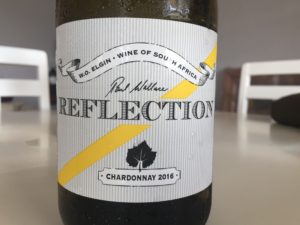 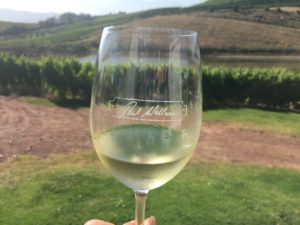 Chardonnay vines were planted in 2016 to supplement the 12.5 hectares of Sauvignon Blanc, Pinot Noir, Cabernet Franc and Malbec on the 25 hectare property. The 1.5 hectares of vines will produce their first vintage in 2019. Meanwhile, the Maiden Vintage was made at Eikendal Vineyards using grapes from a neighbouring farm. The ‘Reflection’ name stems from the glorious early morning and evening reflection of the vines in the dam below the Tasting Room. The wine was paler than many a Chardonnay and lightly oaked for 9 months in 2nd/4th fill oak. It was shy in character with low complexity of baked apple and lime aromas. The creamy mouthfeel showed evidence of malolactic fermentation. 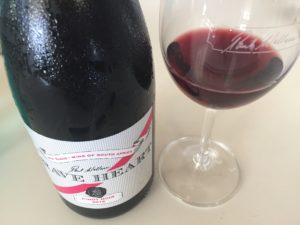 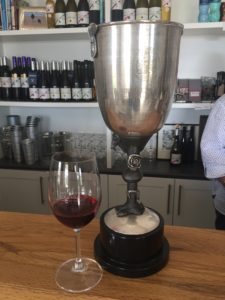 The Brave Heart Pinot Noir, the 3rd vintage made by Paul Wallace, was my favourite wine. Elgin is noted for its cool climate and is of course Pinot Noir country. The wine was heavier bodied than many, being medium bodied and pale ruby in appearance. I liked the subtle warm cherry and cranberry aromas that led to a smooth, rounded and balanced mouthfeel. Nicky reminded that the 2015 wine won the Best Pinot Noir Trophy at the Old Mutual Trophy Awards in June. I tasted it then and noted ‘the warm cherry aromas, mixed with strawberry and peppercorn spice, silky on the palate, with a follow through and soft elegance of tannin with fruitiness’. The award is a major achievement. Last awarded in 2012, there were some other big name vineyards etched on the Trophy base: Chamonix, Meerlust and Bouchard Finlayson. 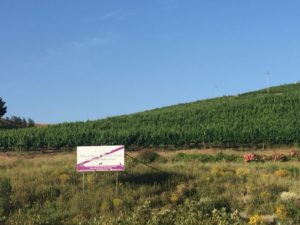 We discussed the farm and the elegant bottle labels. The coloured stripe, or ‘sash’ perhaps, ties in with the Scottish themes of Wallace, of Brave Heart (a pun on Pinot Noir being known as the ‘heartbreak’ grape due to its difficulty to grow and the tight bunches that make it susceptible to disease), and of Highlands Road. The stripe is reminiscent of Mumm Champagne but runs in the opposite direction. Each wine has a different colour: green for the Sauvignon Blanc; yellow for the Chardonnay; pink for the Pinot Noir; orange for the Crackerjack; and purple for the Malbec. I noticed the sign for the winery from the road as I left, complete with distinctive stripe. 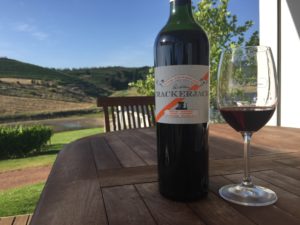 The Bordeaux blend ‘Crackerjack’ was indeed a cracker! Merlot led (50%) and just released for the first time with Cabernet Franc in the blend, I liked the subtle ripe but bold aromas of complex black and red fruits. The blend seemed to get the best out of each cultivar – ‘the art is in the finishing’, said Nicky – to make a wine with a refined, delicate palate with integrated tannins that were surprisingly soft for the youth of the wine. 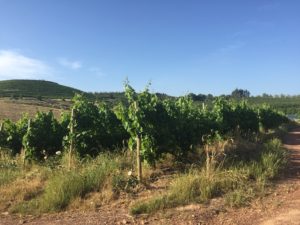 I read later that Paul and Nicky bought the farm in 2003. Paul is a viticulturalist and has since 1996 had his own consultancy, advising both leading wine brands and smaller boutique farms. Golden Delicious and Granny Smith orchards were cleared for the vineyards. It is easy to see the incremental approach that has been taken to develop the winery. Sauvignon Blanc, Malbec and Pinot Noir were first grown, the Tasting Room and cottages opened then, in 2016, Chardonnay and Cabernet Franc planted. Four hectares remain open for final vine planting and it will be interesting to see what is planted. It could me more of the same or a different cultivar – how about Sémillon or Shiraz or even Cabernet Sauvignon that, as I heard at South Hill, can be grown on South facing slopes. I don’t know about the soils but Paul Wallace has the advantage of steep, terraced slopes that face different directions. 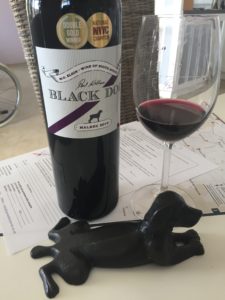 The last wine of the tasting was the Black Dog Malbec and another favourite. Again, the name was chosen with clever thought: the wine is named after Paul’s black Labrador/Rottweiler dog; Malbec is known as the Black Grape and famous for its intense, muscular character. The wine was indeed powerful, being full bodied with juicy rich flavours of blackberry, dark mulberry, black plum and dark cherry with a hint of spiciness. The fruitiness balanced the soft tannins for an elegant wine. 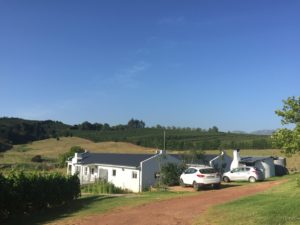 As I finished the tasting, it emerged in conversation that coincidentally and without knowing, I had met Nicky’s son earlier in the day. Eldest son, Mark was the new winemaker at Oneiric wines. Indeed, as in many wine farms, the entire family is involved (youngest son Bobby has also studied winemaking). 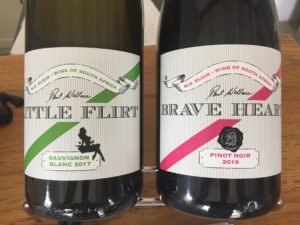 I thoroughly enjoyed my tasting at Paul Wallace. The wines, indeed the philosophy, were fun and unpretentious. That doesn’t mean that they were not well made as indeed they were. The small range covered all bases too and it is always a treat to find a decent Pinot Noir and Malbec. I liked the balance and the length of finish of the wines, whichever one. I now have another wine producer to add to my list of those whose wines I would gladly buy without prior tasting, with confidence that the wine will be of a high quality and one I shall enjoy. I shall look out too for Paul Wallace wines in the Old Mutual Trophy and other awards next year. 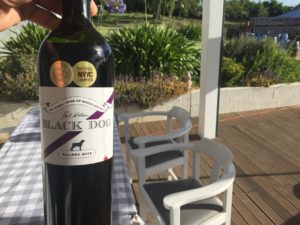 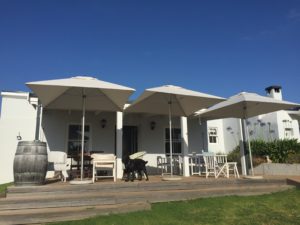 Nicky was a great host too, chatty and full of knowledge and I look forwards on another occasion to tasting with Paul too. The website gives one warning on opening times: the Tasting Room may close early if Western Province or the Stormers are playing at Newlands. That’s ok by me as I shall probably be there too …. 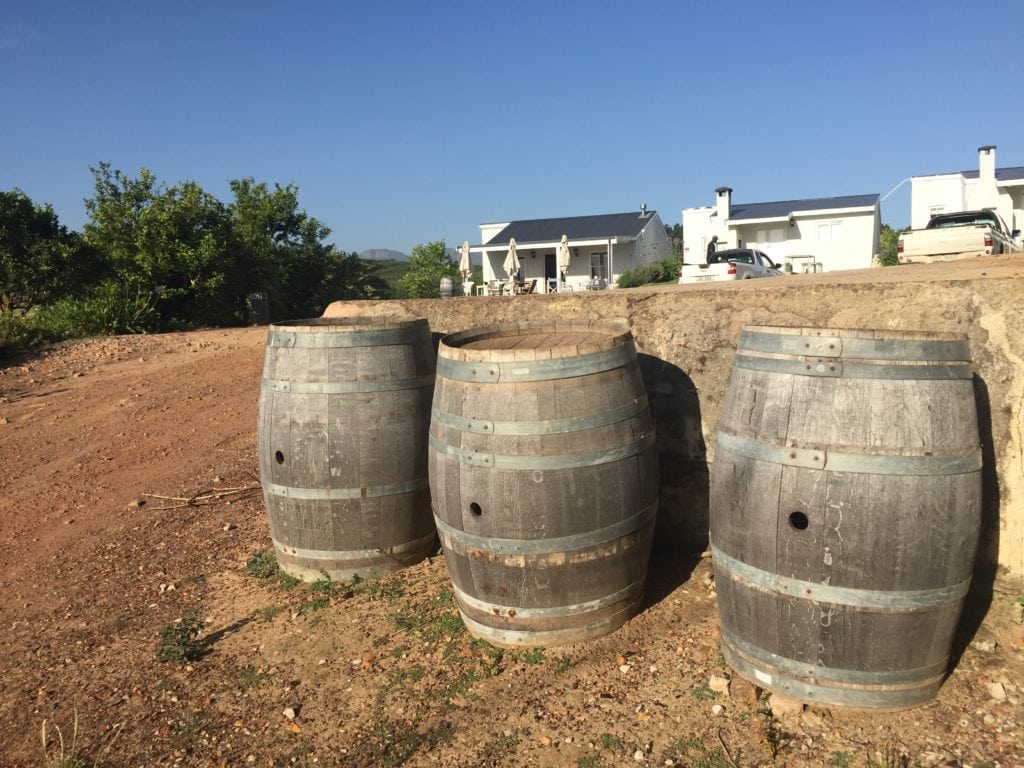