Dreaming of a Wine Christmas 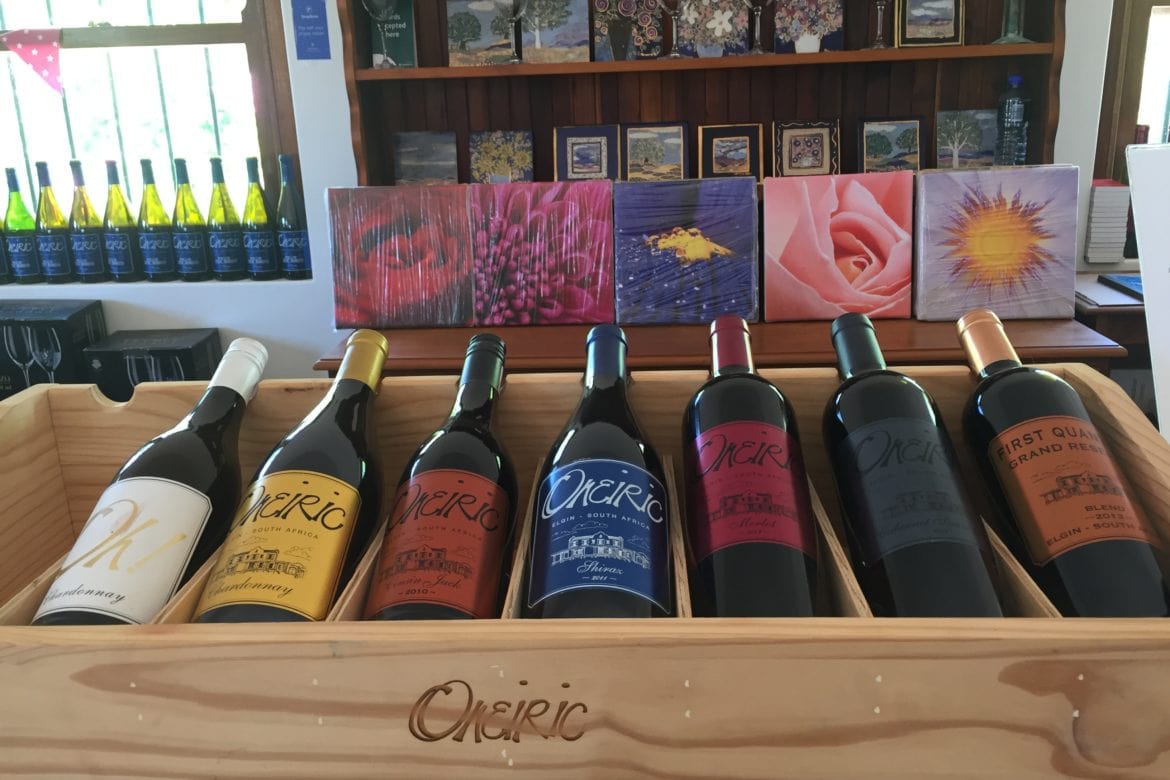 All the grapes at Oneiric come from the estate, Carla said, as she hosted me for my wine tasting. She was a new employee, still daily commuting from the Southern Suburbs in Cape Town and seeking local, affordable accommodation. The 2018 Platter’s Guide advises that tasting is ‘mostly by appointment’ and so I arrived at my appointed time from an earlier tasting at South Hill. Carla’s arrival extends Oneiric’s opening hours from 10am to 4pm from Tuesday to Sunday. 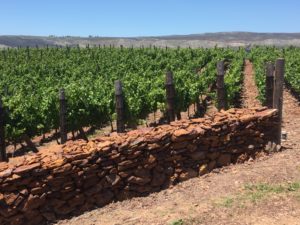 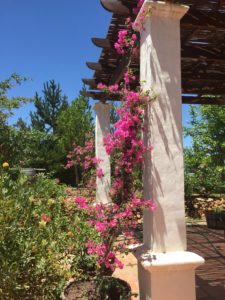 The long narrow gravel drive, passing Spioenkop that I was unable to visit due to bottling, gave clue to the terroir with its dusty red colour. This is ‘cool climate’ country. Oneiric is, but for Iona Wine Estate, the most Southern of the Elgin vineyards and little more than 10 kilometres South of the N2. I was warned to follow the directions on the website rather than use GPS co-ordinates. I did well to follow the advice as I know from previous tasting days in the Elgin Valley that my satnav ceases properly to function along the Viljoenshoop Road. By the time I reach Almenkerk Wine Estate the road and my position on the map part company and I realise too late that I have missed the turning left to Highlands Road. 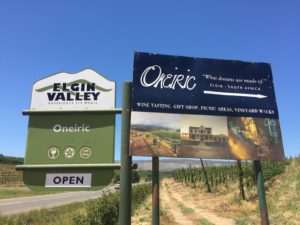 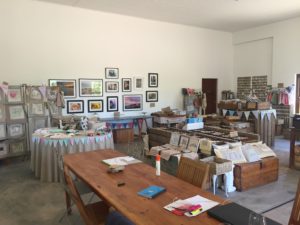 The heavily branded Elgin Valley signpost, in olive green and white, made the turning into the driveway easy to follow. I parked beside the Tasting Room with stoep and pretty pink Bougainvillea. The room was larger on the inside than it had first appeared and could easily have been a craft shop attached to a padstal on Route 62. Pictures lined the walls and several items made from printed and woven fabrics were for sale. A large open table with hundreds of multi-coloured buttons hand-painted in a Johannesburg factory was in the middle of the room. Carla told how people spend ages looking through them for the perfect set to buy. 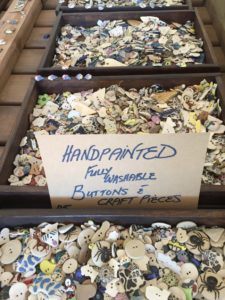 There was informality to the setting. New winemaker, Mark, was busy on his laptop and logging radios as I sat down to taste. I didn’t know to start that he was the winemaker. Nor did I know too that at the end of the day I was to meet his mother who was to host me at another wine farm. I sat at the opposite end of the long pine table as Carla poured the first glass of wine. 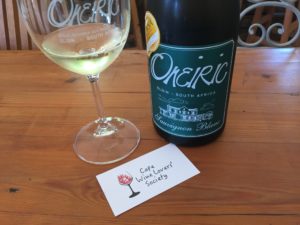 The Sauvignon Blanc was my favourite wine of the tasting and the bottle I bought. It was pale straw and with a distinct green tinge in colour but it was the nose that got my immediate attention. There was an unusual, though highly pleasant, chalky minerality ahead of green pepper, lime, citrus and asparagus aromas. I was surprised by the prominence and it followed through to an elegant, dry palate with a decent acidity. The wine was also unusual for its age, a 2013 vintage. I commented that many customers surely seek the 2017 wine and that it was refreshing to be offered an older wine, a pattern that followed through the tasting. 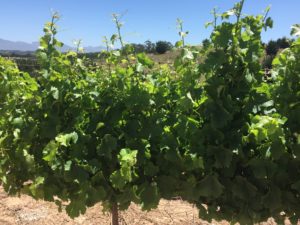 I sampled both Chardonnays after. The Oh! Chardonnay is so called to emphasise the name of the estate. I asked Carla how properly to pronounce the name: it is pronounced ‘oh! – ne – rik’ and I correctly guessed the word to be of Greek origin. It roughly translates as ‘dream’ and the Oneiric literature and website refer to ‘what dreams are made of’ and ‘pertaining to dreams’. I was not surprised as I have always enjoyed and admired the intimacy of the landscape in the Elgin Valley. There’s a tranquil beauty that comes from the rolling hills and patchwork of pine forest, apple or pear orchard and vineyard. The roads are quiet and the pace of life slow. It reminds me somewhat of Southern England, specifically South Sussex, where I spent my childhood. 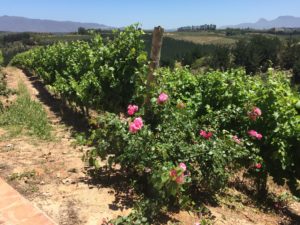 The entry-level Chardonnay was unwooded and slightly green tinged also. It was both shy and delicate on the nose with gentle Granny Smith apple aromas. Clean and without any creaminess usually associated with oak, it was light on the palate and the finish but showed good acidity. I much preferred the Chardonnay from the Copper Collection. Eight months maturation in new French oak gave it a deeper colour. Wooded notes of vanilla well balanced baked apple, lime and white honey on the nose for a rich complexity. The wine was equally clean in mouthfeel as the Oh! to be almost Sauvignon Blanc like or Burgundian in character. 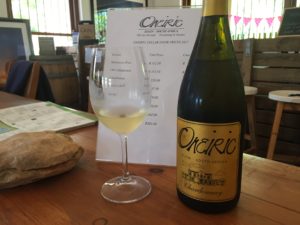 As I tasted, Carla explained the history of the farm and the label colours. It was Matt Pascall who bought the farm in 2007 for both the beauty and a new lifestyle, aided by the advice of family friend Andrew Gunn who owns Iona Wine Farm and who I met during an earlier foray into the Elgin Valley in May. New Sauvignon Blanc, Chardonnay, Merlot, Cabernet Sauvignon and Shiraz vines were planted in small blocks that take up just 8 hectares of the 64 hectare property. The remainder is taken up by apple and olive trees, trout dams, a lake and natural fynbos to make for the ‘dreamy’ location. Later, when Carla showed me the new Cellar and Tasting/Function Room, I could see the Pascall family home in the middle distance in a glorious elevated setting with panoramic views from the top of the slope. 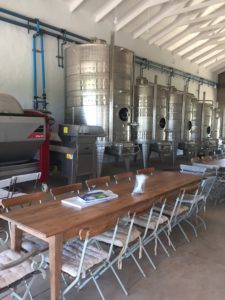 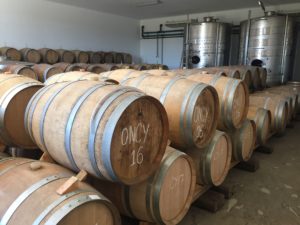 I was told and read the story after how 95,000 bottles of wine were made and how Matt realised, after drinking 500 bottles in 3 years, that it was time to take the wines to market. Daughter Shan relocated to Cape Town from Johannesburg in January 2012 and within 8 months the wines were ready for sale. She is very much the driving force behind the operations, sales and marketing of Oneiric – the crafts and the buttons too – and I would have liked to have met her. 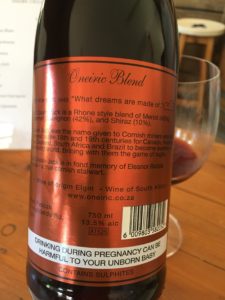 The Cousin Jack was a medium to full bodied Rhone style blend of Merlot and Cabernet Sauvignon with a dash of Shiraz. The individual red fruit flavours were none too distinct but I liked the smooth and balanced mouthfeel. This was another older vintage (2010) and I wondered how long the 95,000 bottles will last for aged wines to be sold, a rare treat for a South African winery. 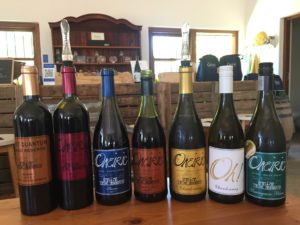 The Pascall family has its roots in copper mining in Zambia and Zimbabwe. These are reflected in the unique and eye-catching metallic labels, with the colour for each cultivar playing on a copper derivative: oxidised malachite for the Sauvignon Blanc; golden yellow chalcopyrite ore for the Chardonnay; copper for Cousin Jack (Cousin Jack was the name given to the 18th and 19th century Cornish miners who left for the USA, Brazil, Australia, New Zealand and South Africa, bringing with them their mining expertise and the game of rugby); deep blue oxidised azurite copper for the Shiraz; crimson cuprite, a copper sulphide mineral, for the Merlot; and pale gold for the Quantum blend, named after the 3rd biggest copper mine in the world. 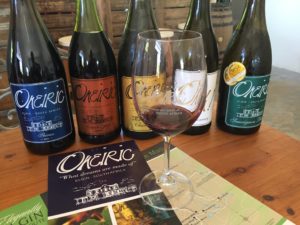 I preferred the Shiraz to the Merlot. Both were full bodied and made by previous winemaker Niels Verburg, now making wine in Botrivier. Smooth and refined, with tannins balanced with the 14.5% alcohol and fruity spiciness on the palate, I picked out softer white peppercorn, blackberry and cassis aromas on the nose. 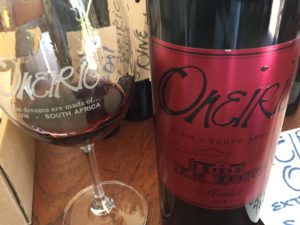 The Merlot showed similar style being forwards of warm red fruit flavours – redcurrant, red plum and some cedar – and with a balanced mouthfeel albeit with tight tannins. Unsurprisingly at R582 a bottle, I did not get to taste the First Quantum Grand Reserve blend of equal amounts of Cabernet Sauvignon and Merlot. 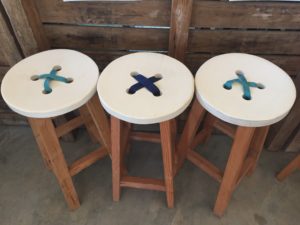 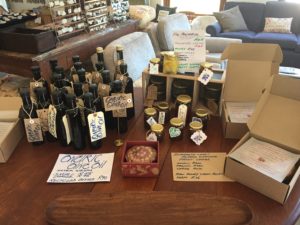 Oneiric intrigued for its quirky character and difference, no doubt the brainchild of Shan. There were elements (pun intended) and personal touches that felt almost homely in being – the random, almost unfinished gift shop nature of the Tasting Room and even the ‘button’ stools. Besides was a grand, brand new Cellar with shiny stainless steel fermentation tanks laid out with seating for functions and large numbers of tasting guests. The professional yet trendy wine labels will certainly make Oneiric wines stand out on the bottle store or supermarket shelf. The wines were well made and of good quality, perfect either with food or for a present for Christmas or other occasion. 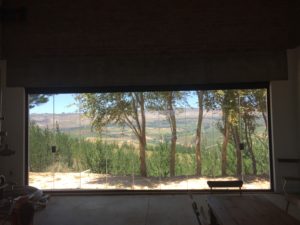 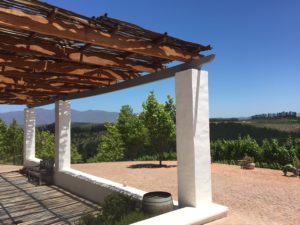 I sensed a time of transition for Oneiric, from country house to corporate in style. It is one of the youngest of Elgin’s wine farms. I expect it to gain in exposure and is one to watch. Dreams, with Shan’s passion and enthusiasm, certainly will come true … 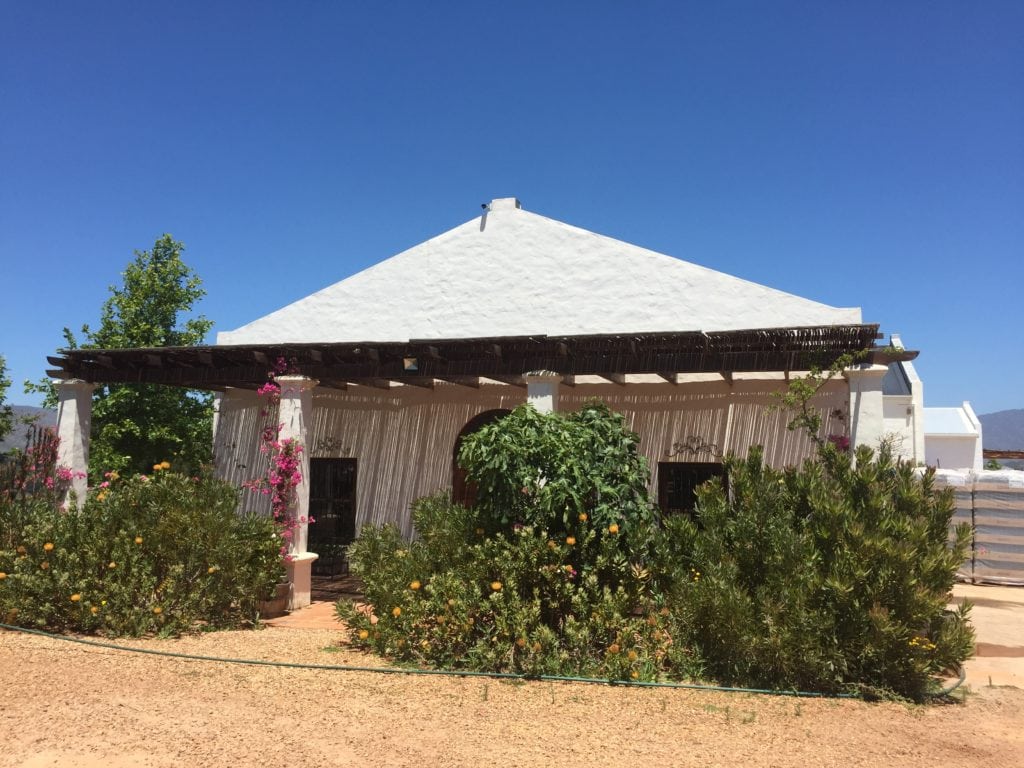