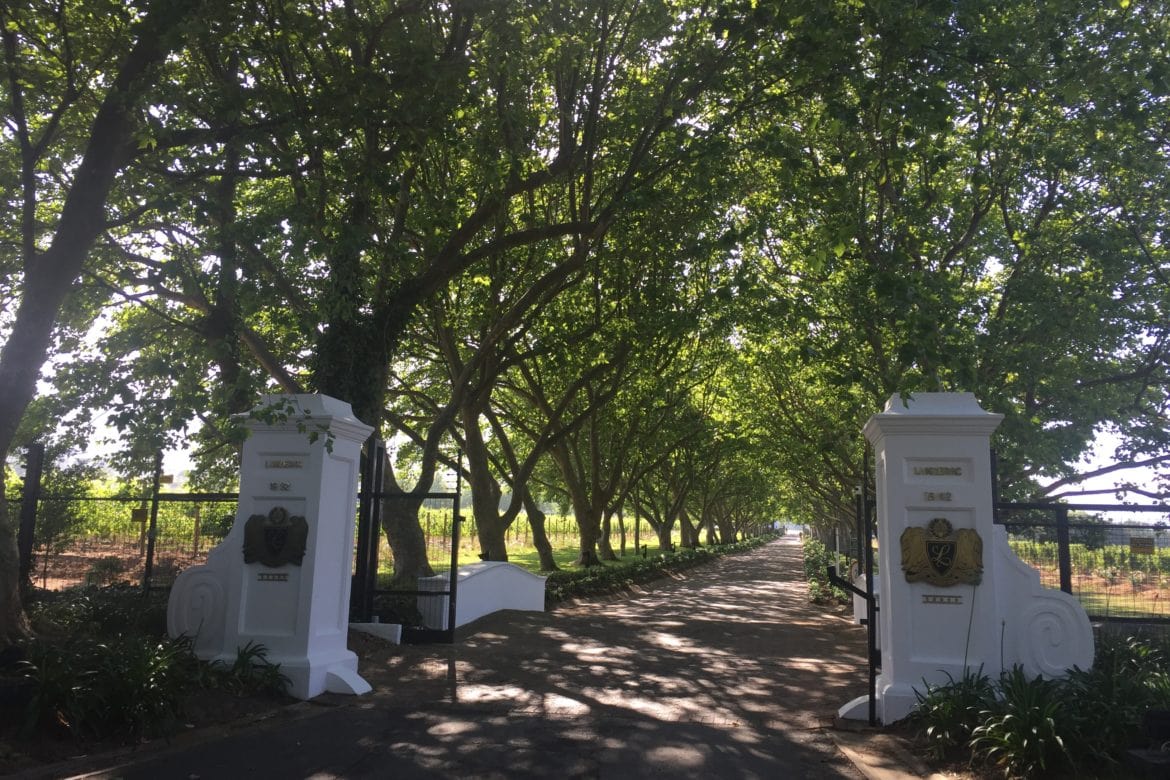 Cicadas purred in the morning sun in the vineyards as I arrived at Lanzerac, just east of the city centre of Stellenbosch. The approach was both classic and elegant: archetypical white gate posts, tree-lined avenue with hydrangeas beneath; and majestic views on both sides over leafy vines to mountains beyond. Gardeners tidied any leaf that was out of place and sprinklers drenched emerald green lawns in the courtyard facing the classic Cape Dutch Manor House. The obvious construction and workers repairing the Hotel, Restaurant and offices that were burned by an electrical fire in late May 2017 – a major incident for the estate – seemed but an irritation to the serene scene. 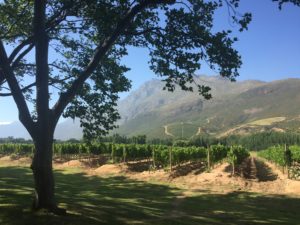 Fortunately for me, the Tasting Room (Deli and Spa too) were unaffected. It was extended 3 years ago and oozed a classic English lounge atmosphere that made me – an Englishman – feel very much at home. There was a large fireplace at one end, tapestry covered chairs, gilt framed paintings and exposed beams. The scene was set up for an excellent tasting. 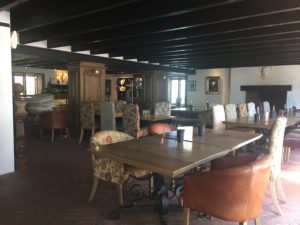 Even better, Lucrecia greeted me with a full glass of MCC. As I sipped, I racked my brain as to where I recently had tasted Lanzerac wines. It may have been at the Saturday morning Neighbourgoods Market at the Old Biscuit Mills in Woodstock, Cape Town but I cannot remember. My attention soon focused back onto the superb MCC, elegant fine bubbles rising in the classic flute glass. Dry to taste, I enjoyed the yeasty baked apple flavours. 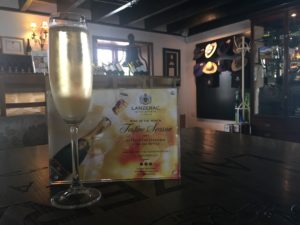 It was still just after 9am but the early morning start meant that I had Lucrecia’s undivided attention. The large Tasting Room – and upstairs picnic area above at the rear – would very soon be full with holiday guests and festive visitors. Tasting Room Manager Lucrecia explained how she recruited Stellenbosch University students from the Department of Viticulture and Oenology to cover the extra demand. Thoughtfully, she even selected those who spoke German or Chinese to make the foreign visitors feel at home too. 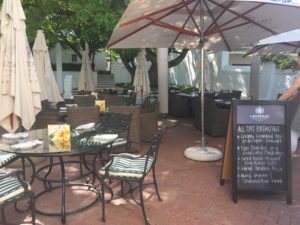 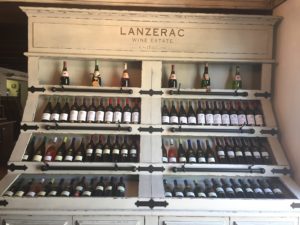 Lanzerac wines are divided into 3 collections: the Premium (Single Varietal) Range; the Flagship Heritage Range; and the exclusive KV (Keldermeester Versameling) Range. The KV Range, with classy embossed white labels, limited to production of around 1,000 bottles of 3 wines, was first released in 2017 and not included for tasting. Guests can choose between the Premium Tasting (5 from 7 wines from the Premium Range for R70) or the Heritage Tasting (the 3 Flagship wines and the Brut MCC for R150). A further option is a Wine and Chocolate Tasting which pairs 5 Premium wines with 5 selected chocolates. Lucrecia explained how the chocolates change each year to make the closest match as each vintage changes in character and flavour. 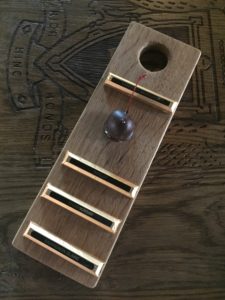 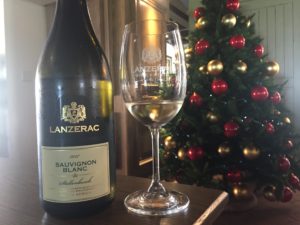 Lucrecia spoiled me by including Premium and Heritage wines as well as the chocolate pairing. We began with 4 white wines from the Premium Range, all very competitively priced at R75 to R115 per bottle. The Sauvignon Blanc made a perfect start. The nose was potent with great complexity with inviting aromas of green asparagus with fruity guava, gooseberry and green lemon. It was refreshing, clean and elegant on the palate with a bright acidity. The wine was paired with almond and peach white chocolate. I understood the stone with tropical fruit match but the contrast between crisp wine and oily white chocolate was not to my preference. 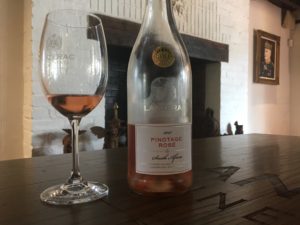 The 2017 début Pinotage Rosé made to reflect the historic connection between the estate and the cultivar – Lanzerac made the first commercially bottled Pinotage in 1959 – was a pale salmon in colour that hinted at minimal skin contact of just 2 hours. I liked the dry and light character but wanted more from the shy aromas and strawberry, candyfloss flavours. 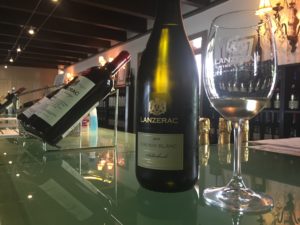 I rated the Chenin Blanc and Chardonnay the same. Classic lemon, kiwi, grapefruit, apricot and honey notes defined the Chenin Blanc that lightened on the palate but with good dry acidity. I just preferred the delicately wooded Chardonnay with its unusual but elegant midnight blue capsule. The wine is mostly barrel fermented (70%; 30% is made in stainless steel tanks) with 7-8 months of bâtonnage (lees stirring) before bottling. This gave the wine delicious butterscotch and vanilla notes with baked apple and lemon citrus aromas. The apple flavours followed through well to the palate which had a fuller mouth feel from the oak fermentation and maturation. I did not hesitate to buy a bottle. The wine was paired with lemongrass white chocolate. Again, I could understand the reasoning behind the flavour match with the wine but the textures did not complement each other. 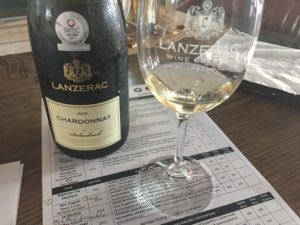 We paused before sampling the red wines from the Premium Range. Lanzerac is owned by a British Consortium and lies at the foot of the Jonkershoek Valley. It dates back to 1692 when Governor Simon van der Stel granted land to Isaac Shrijver and 3 freed slaves. The Manor House dates back to 1830 and is used for weddings and private functions. Forty-six hectares of the 150 hectare property are planted with vines, mostly Chardonnay, Merlot, Cabernet Sauvignon and Pinotage. 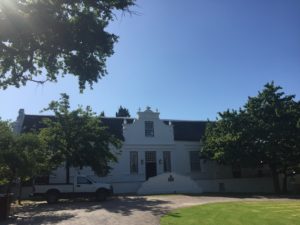 The next 4 wines too were classic single variety wines from the Premium Range – Syrah, Merlot, Pinotage and Cabernet Sauvignon – and of similar, decent quality and in elegant dark opaque bottles. The multi-award winning Syrah, new to the Range, was full bodied and fruity spicy. Cassis, mulberry blackberry and pepper spice flavours were slightly overpowered by astringent tannins that later softened on the palate. 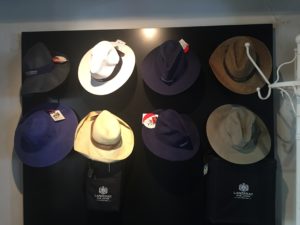 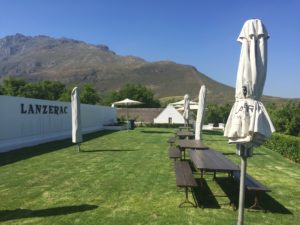 The Merlot too was full bodied but the aromas of redcurrant, cedar and raspberry – opening out with plum – more restrained. The flavours softened on the palate as tannins showed their 12 month oak maturation presence. The pairing, with 60% dark chocolate flavoured with cherry and cigar was the best so far. 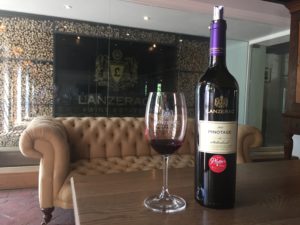 I liked the Pinotage. Whilst full bodied, the wine was shyer in character than I expected and better for it. Plumy without being too juicy and with a hint of banana, dry and forwards tannins were more rounded than for the Merlot. The chocolate pairing – a black cherry ‘bomb’ coated in dark chocolate – was good too. 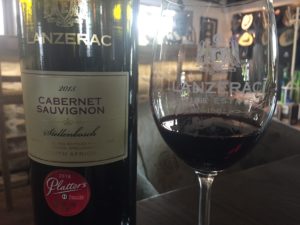 Deep ruby and full bodied, the Cabernet Sauvignon showed more on the nose, boosted by a 14% alcohol content. Complexity of cassis, blackberry, mulberry, white spice and black olive aromas was good. Like the other Premium Range reds, tannins were forwards and stronger than the flavours which lightened on the palate. The Cape Malay milk chocolate paired best of all as the cinnamon and nutmeg flavours well balanced the spiciness in the wine. 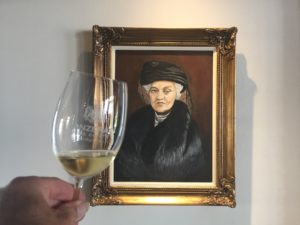 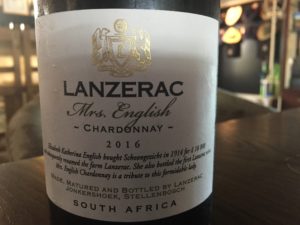 I was privileged to be able to sample the rest of the Heritage Range (the MCC was the first). Each wine has story behind the name. The lightly wooded Chardonnay was my favourite wine of the tasting. The grapes come from a single vineyard less than a hectare in size and at 375 metres above sea level. I rated the wine highly for its good complexity and focused baked apple and lemon intensity of flavour that followed through to a rounded and smooth, dry finish. It was called Mrs English after Elizabeth Katherina English who, after many changes in ownership, bought the property for £18,000 in 1914. It was called Schoongezicht Farm and she changed the name to Lanzerac after a friend, the French General Lanzerac. Mrs English not only refurbished and altered the homestead and outbuildings but is thought also to have made the first wine from grapes grown at Lanzerac. 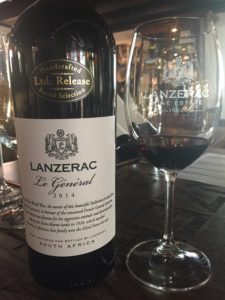 The only blend of the tasting, the Le Général – neither pure Bordeaux Blend nor Rhone Blend nor Cape Blend – was named after the renowned First World War General who was known for his courage and offensive in 1918 offensives that finally won the Allied Forces the war. Bottle 3496/6000 was rich and ripe and bold in flavour with presence of complex red and dark fruits as might be expected from the combination of cultivars. Smooth, rounded tannins were the best of any red wine. This was not for drinking alone but the perfect accompaniment for a meal. 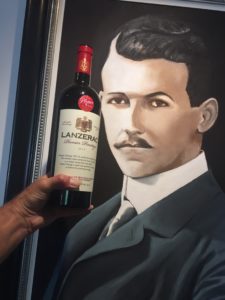 The Flagship Pinotage – named Pionier in tribute to the first commercially made Pinotage in 1959 that was released in 1961 to mark the birth of Pinotage as a South African varietal. Lucrecia reminded me of how Professor Abraham Perold of nearby Stellenbosch University in 1925 had crossed Pinot Noir with Cinsault/Hermitage to develop the cultivar. She did not know that the Muratie Estate claims to have supplied the original Pinot Noir vine for the cross. She has tasted the original wine – brown but distinct in flavour. The 2015 vintage, a Platter 5 Star winner and made from the oldest vines on the highest slopes of the estate, was also bold, ripe and fruity. Plum, cherry, blackcurrant and mild banana aromas gave a richness in the glass. The wine was well balanced on the palate as the flavours matched velvety smooth tannins from 18 months in French oak and 14.5% alcohol. This was a great wine indeed. 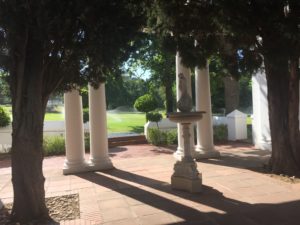 Lanzerac impressed and I thoroughly enjoyed the tasting. The arrival impression followed through well to the wines. I should like to sample the fare in the deli restaurant too. Lucrecia was an attentive host. She poured each wine in a clean glass that was a nice touch and rarely experienced. Our conversation was easy due to the lack of interruption and her excellent knowledge of wines, and not only for Lanzerac but for other estates in and around Stellenbosch too. 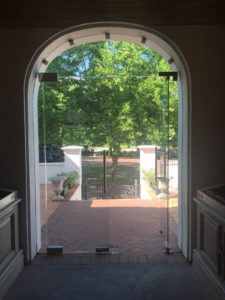 I noticed a pattern in the style of the Premium Range wines. The white wines were forwards with pronounced aromatic notes whilst the flavours of the red wines lightened on the palate with tight and sometimes astringent tannins. I liked the single cultivar approach to the Premium Range too. I shall certainly think of Lanzerac to bring a guest who wants to sample the classic big name cultivars that are grown in South Africa. 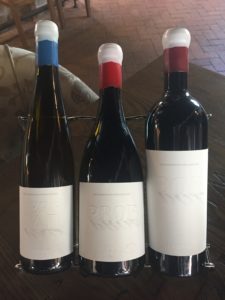 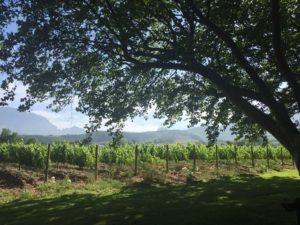 The Heritage wines showed a clear step up in quality -price too – and that is not always a given for many estates. I had done well in my tasting and would have liked to have sampled the 3 wines from the KV range: the aptly named Prof, a blend of the Pinotage ‘parents’ of Cinsault and Pinot Noir; the Dok, a Malbec that was the favourite of rugby legend Dr Danie Craven who regularly walked his dog, Bliksem, at Lanzerac; and the Bergpad, a single variety Pinot Blanc, more commonly used in blending and produced only in South Africa at Lanzerac. It matters little as it gives me an excuse – if ever needed – to return …. 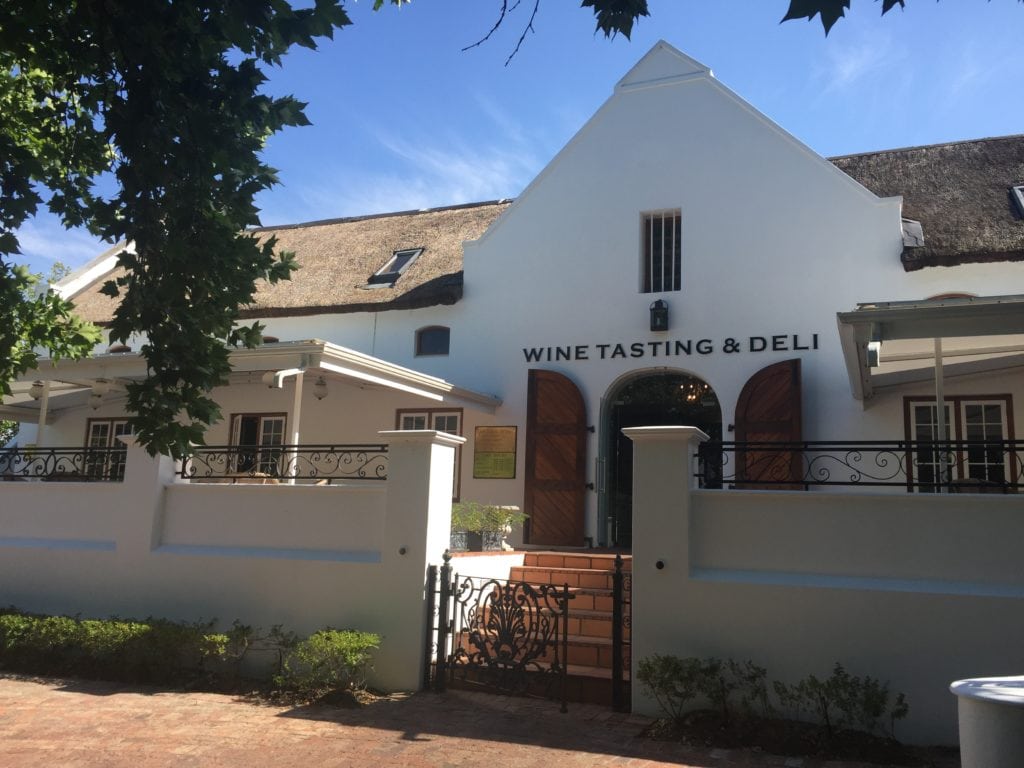