A Table Setting Fit for the Gourmet at De Grendel 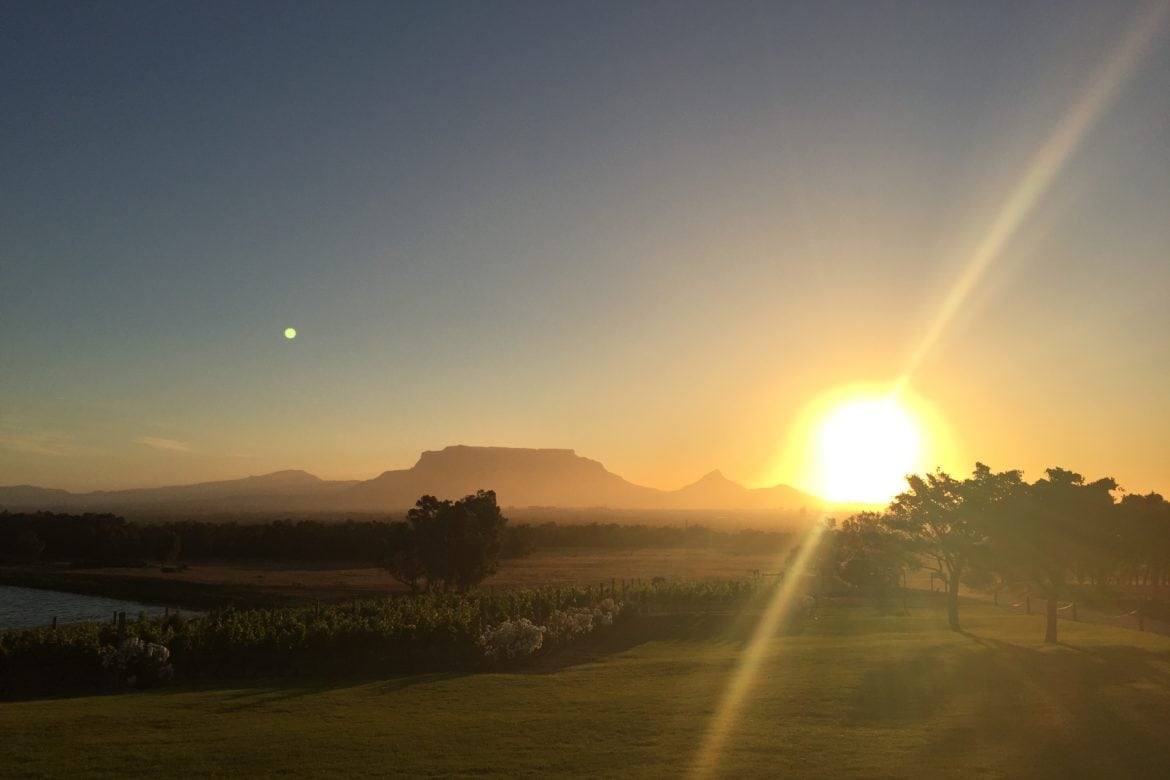 The view from the De Grendel restaurant was spectacular. Table Mountain was aglow with the setting sun. It was a welcome return to the estate having tasted the excellent wines at the end of August. I vowed then to return for dinner as, if the food was as good as the wines, I knew I would be in for a treat. I also wished to show one of my favourite estates to my partner. 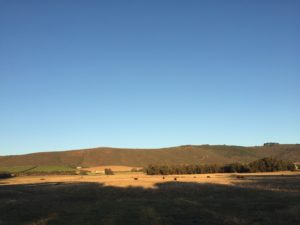 De Grendel is little farther from the Cape Town CBD than the Constantia estates. Yet, coming from the Southern suburbs, this Southernmost Durbanville vineyard seems a lot further away. I remembered the long and twisting driveway that passed through an avenue of trees and the bontebok in a field beside the road. This time, the restaurant and tasting room building – elevated above the leafy vines and dam – was bathed in orange light that softened the hard edges of the contemporary design. 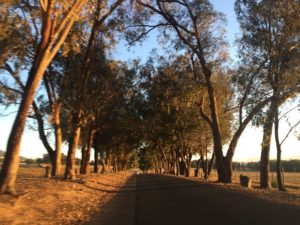 This was one another reason for returning, to see the sunset over Table Mountain from this spectacular setting that few restaurants can better. I had booked ahead, weather forecast in hand, and hoping for a cloudless evening. I was well rewarded. 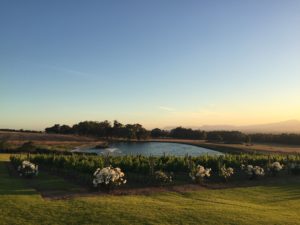 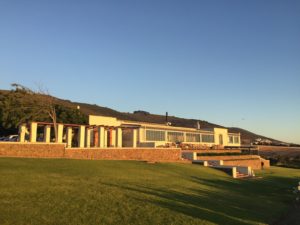 Security at the estate entrance was meticulous and polite. I was surprised to see so many cars in the car park when I arrived. Dinner is from Tuesdays from Sundays and booking was equally thorough: email confirmation, SMS reminder, and SMS asking me to confirm my booking. I can see why now as the Restaurant was fully booked, with tables large and small. I had not been into the Restaurant above the Tasting Room before. Split into 2 rooms, one overlooking the cellar and the other the open kitchen (which I always enjoy), the décor was large country house comfortable. 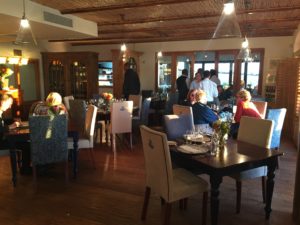 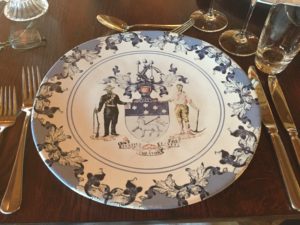 Protea flowers, cut glass candle holders, and a large blue and white Delft charger – presumably containing the Graaff family crest – set the scene. I needed little to whet my appetite as I was hungry already. Justice was my attentive waiter, full of smiles and full of knowledge about each dish on the menu. Throughout, his service was impeccable, neither too fussy nor too rushed nor too absent. 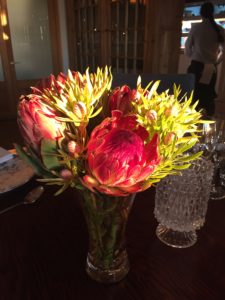 The menu offers 2 courses for R350 and 3 courses for R385. There is plenty of variety for the limited selection, with each choice well described in plain English. Starters, for example, included dishes based on celeriac, quail, springbok, langoustine, and tuna. The vegetarian and pescetarian diner were well served. 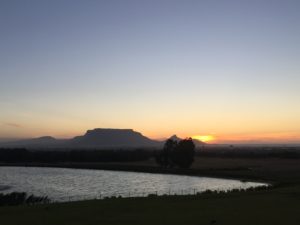 Another nice touch is that every menu item, through to main and dessert courses, has a suggested De Grendel wine to pair with it and available by the bottle or by the glass. Prices were reasonable too – I can think of one Constantia estate that charges 3 times the tasting room price for wine with a meal, despite the mere 20 metre walk from cellar store to restaurant. Wines from other estates are included in the wine list under the elegantly worded heading of “Family and Friends Wine”. I did not need to look at them as I knew how excellent the De Grendel wines were from my earlier tasting. I did notice that De Grendel vintages back to 2006 were included. Corkage is a hefty and prohibitory R200. 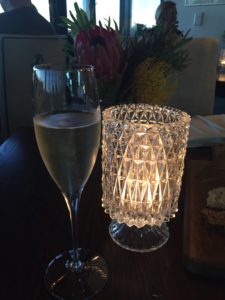 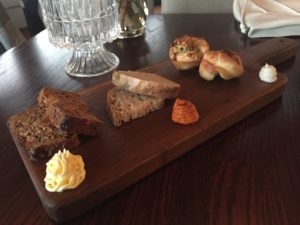 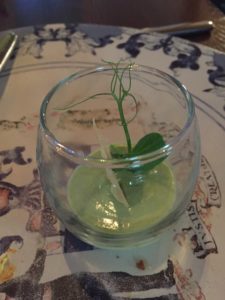 A selection of home-baked breads, matched with accompanying flavoured butters, was served whilst we waited. I did not want to spoil my appetite but the tasty selection was far too tempting. A lovely surprise after was the mini ‘palate cleaner’ that was served in a small stem less glass. It consisted of pea, mint yoghurt, of delicate pale green colour, with parmesan crisp. Justice was attentive enough to leave out the bacon crumbs for my Muslim partner. 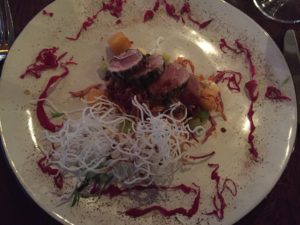 By now the sun had sunk below the horizon to leave Table Mountain in silhouette against the orange and indigo sky. Cape Town’s city lights were beginning to sparkle in the still evening. The starters soon arrived and I immediately realised what a treat we were in for. Both dishes were elegantly laid out, on different plates, with colour, balance and precision. They tasted superb too (we swapped to taste both dishes) with every element distinct and complementing the other. My tuna was silky soft that matched the dry crispness of the noodles, the sweet pineapple and delicate cucumber. I liked the blend of Oriental tastes that accompanied – Japanese sake, Indian chilli and Chinese sesame. 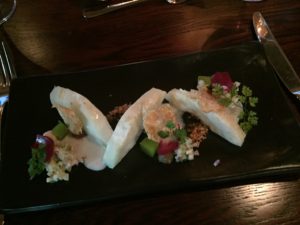 Celeriac is a variety of celery grown for its edible roots, and an unusual menu item. It looks more like a turnip but has a bitter-sweet celery taste. The plating would have looked good in a flower arranging competition and was perfectly showed off on a simple black rectangular plate. Sweet with savoury, soft with crunchy, vegetable with fruit, the flavours simply melted in the mouth. They were superb alone but even better with the equally well-balanced creamy and lightly oaked Chardonnay. 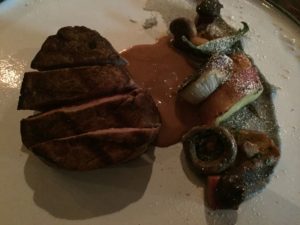 I could not wait for the main course and this was just as delicious. It was only then that I noticed that there was no salt or pepper set on the table. I like my food tasty and often season for my palate. There was no need at De Grendel as every ingredient was tasty of itself and matched and balanced to perfection with the others. I chose the beef fillet, veal tongue, mushroom medley, leek ash pap, confit garlic, pepper, brandy and sweet potato. The beef was as smooth as the tuna and cooked medium rare as ordered. This was dining of a high standard. The Pinot Noir that accompanied – another Justice and menu recommendation – was earthy fruity and lightly chilled. Convention often suggests a fuller bodied wine such as a Cabernet Sauvignon or Shiraz to accompany steak but the light body of the Pinot Noir was ideal for the delicate weight of the course. 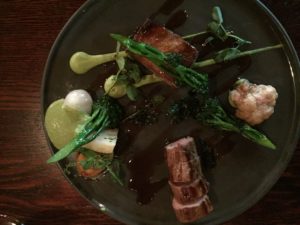 My partner ordered the (halaal) lamb dish that included grilled lamb loin, smoked rib, sweetbreads, barbeque broccoli, mint and new potato. The trio of lamb was as tasty as it looked, with every element accurately and thoughtfully placed on the plate. Texture again – of soft lamb loin with crunchy broccoli with oily, smokey rib and waxy potato – was as much a feature of the dish as colour and flavour. One might not choose a fuller bodied Bordeaux blend with lamb, perhaps choosing a medium bodied Merlot instead, but the Rubaiyat again balanced the richness of the dish. 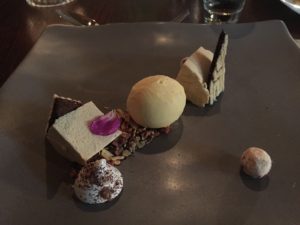 Wow! We paused before being tempted by a dessert. The selection was again varied and I could have ordered any. I opted for the coffee bavarois, cake crumble, nougat, meringue and vanilla ice cream, with Noble Late Harvest dessert wine to accompany. This was a dish of delicate taste and texture. Cold, perfectly quenelled silky ice cream balanced custardy bavarois, semi-crisp biscuit, sweet crunchy meringue and toasted crumb. 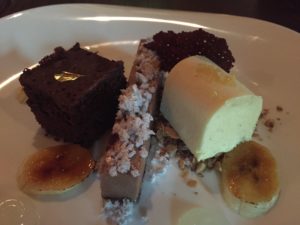 My partner ordered what I could easily have chosen also but we decided to select different items. She opted for the valrhona aero, nutella mousse, banana-lime parfait, banana brûlée and hazelnut crumble. It was, interestingly, paired with the Pinot Noir, but she did not order the wine. Valrhona is a high quality French chocolate made purely from cocoa beans. This was the heavenly combination of chocolate with nut. The presentation, like any flower arrangement was symmetrical but not quite to provoke interest. I particularly liked the banana brûlée with its soft fruity and crunchy sweet combination. It was but a small part of a bigger dish but no less contributory or made with less care. 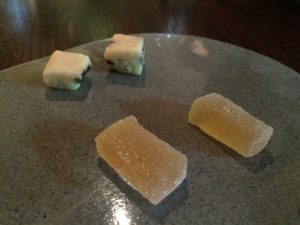 I ended with a black coffee that had a surprise in store too. Rum and raisin fudge with rooibos pastilles, petite and sweet – two of each even though my partner did not order coffee – were just as delicious as any of the dishes I had enjoyed. 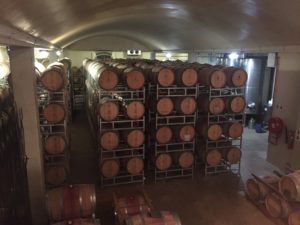 The De Grendel Restaurant impressed but did not surprise given my enjoyment of their wines. The estate is one of a few any of whose wines I would gladly buy ‘blind’ and without tasting – others that come to mind are De Morgenzon, Hout Bay Vineyards, Charles Fox, Ken Forrester, Morgenster, Arendsig, Springfield, La Vierge, Hamilton Russell and Cavalli – and that comes from 100 vineyard tastings during the last 12 months. 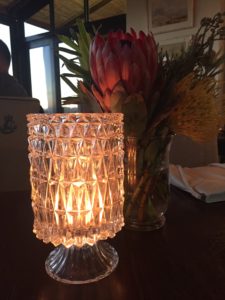 I rarely review restaurants too, just occasionally as certain estates (Oak Valley and Cavalli are the other 2) irresistibly beckon me back because of their wines. In all honesty, I never have been a fan of (what may no longer be called) nouvelle cuisine. I like to feel satiated after a meal and leek ash, scallop foam and sauvignon blanc snow – however technical and in fashion – simply do not fill me. 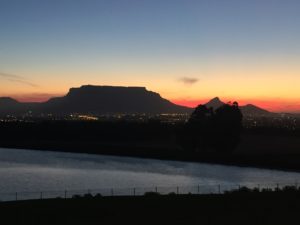 De Grendel blended both technical and artistic cooking. In wine tasting terms, the appearance, flavour, body and structure balanced to perfection. Good food has to look good and to taste as good as it looks. Here, De Grendel excelled. Every dish was beautifully presented. I liked the adventurous flavour combinations and a menu that was interesting and with diverse choices. Colour, shape, texture, flavour and weight perfectly complemented. More than that, the meal price was outstanding for the quality and I shall think twice in future to go to the V & A Waterfront for a meal out. It did not surprise to read after that Head Chef, Ian Bergh, previously worked at La Colombe or that Sous Chef, Conrad van den Heever worked at Michelin-starred restaurants in London. 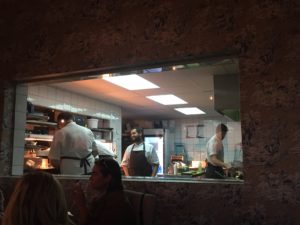 I almost have to pinch myself to ask if the experience really was that good – and, yes, it was. There is only one way to find out and that is to promise to return, just as I did after wine tasting in August. De Grendel really does set a table for a gourmet and with a superb setting … 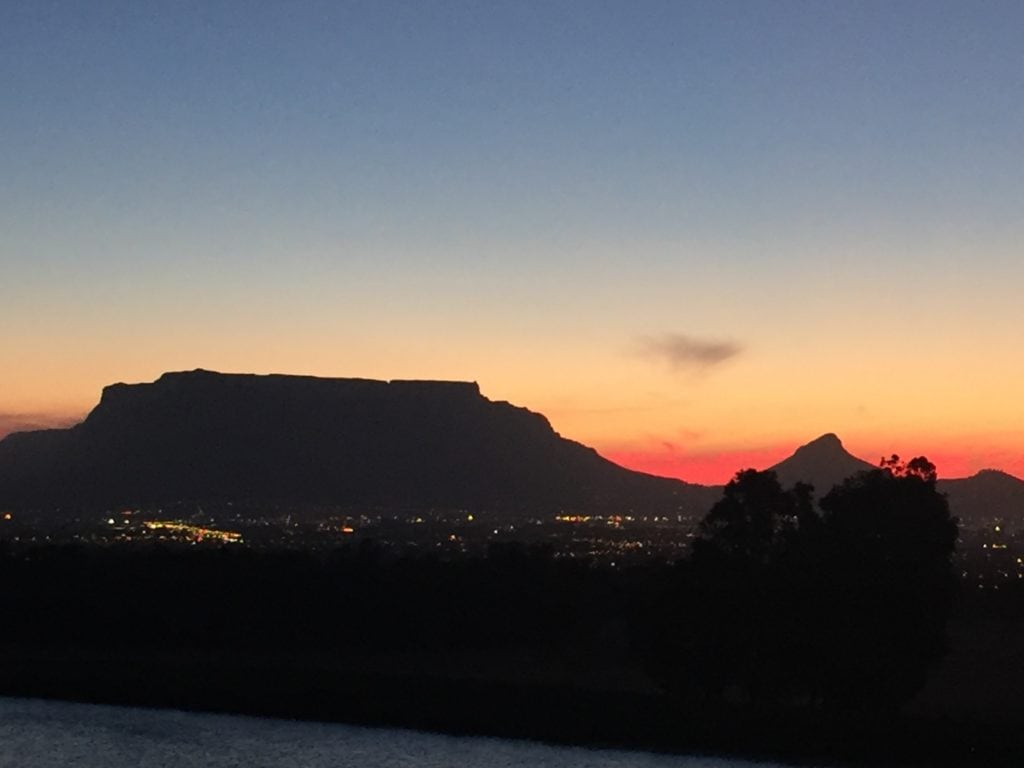