Home/Experience 4.0/More than Just a Destination

More than Just a Destination 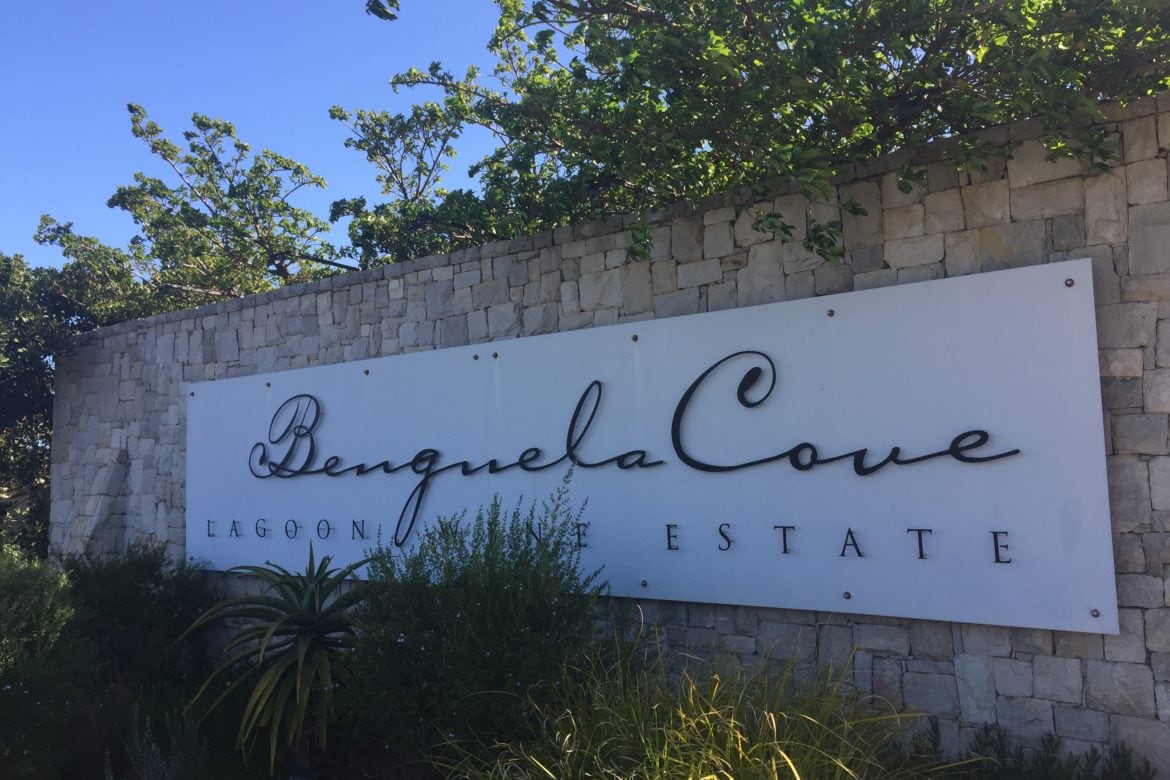 Benguela Cove, like many vineyards, is one that I pass en route to or from Cape Town and never stop to visit. Today was different. I had planned the stopover as part of my return to the Mother City at the end of the Hermanus Weekend wine tour. The glossy estate brochure proclaims that Benguela Cove is ‘more than just a destination’. It was my destination for this Sunday at least. 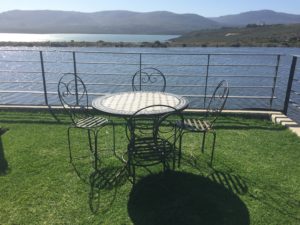 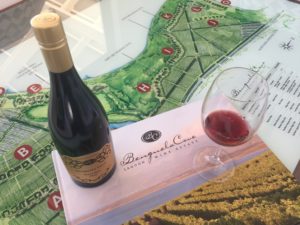 The ‘destination’ phrase is entirely understandable too for there is much more than mere tasting for the wine connoissuer. The basic tasting costs R50 for 5 wines. There are pairings too, whether cheese, cheese and charcuterie, artisanal chocolate or – with dessert wines – millionaires shortbread. Tasting is not even restricted to the Tasting Room as there is a choice of wine safari within the vines or pontoon boat trip across the lagoon. The Manor House Restaurant too offers wine and food pairing for those who enjoy fine dining. There is more to come too as I could see new building development on the headland foreshore beside the Tasting Room. Another restaurant is being built together with a Pirate adventure-themed crazy golf course and, from 1 December 2017, you can book a Blending Experience lunch in the winery. Keen golfers can play on the 18-hole course on the lifestyle estate that has over 120 housing plots together with a host of land and water-based activities. 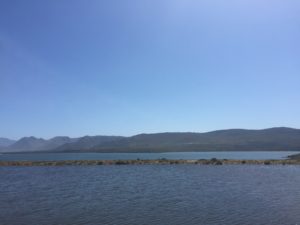 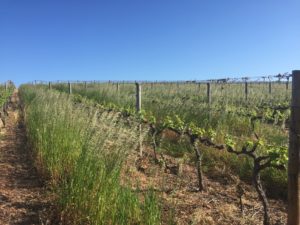 I was at Benguela Cove for the wine and to sample wines from vineyards ‘closest in the World to the ocean’. The vines are planted less than 3 kilometres from the water with some a mere 800 metres away. Bordeaux and Rhone grape red varieties are grown in like amount as the classic white cultivars. Some 66 hectares out of the 206 hectares are under vine. There are 5 hectare of lavender too (a natural insect repellent) as well as 10 hectares of olives. Soils vary with the Southern blocks rich in minerals and quartz on shale and limestone. North facing slopes, those closest to the ocean, are made up of granite and clay. Sea mists hover to cool the vines from the hot summer sun to add to the unique terroir. 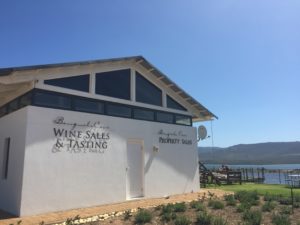 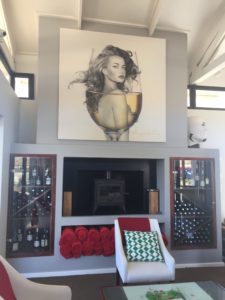 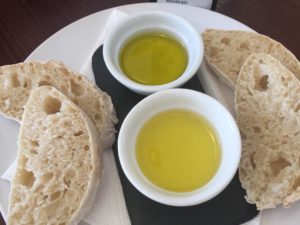 The approach through the vineyards to the Tasting Room, beautifully situated to make the most of glorious views over the lagoon, was inviting and served to heighten my appetite. The Tasting Room itself, shielded from the constant wind, was bright and airy. Full scale witty, modern art wine prints filled the walls. The room had a clean, maritime feel that meant business. Henry was my attentive, able and knowledgeable host. 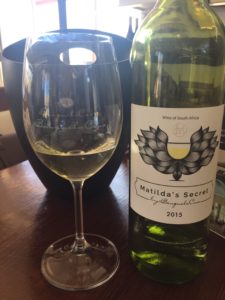 It made sense to taste the 3 Sauvignons Blanc together. The unwooded Matilda’s Secret – named after the owner’s youngest daughter – was first. The wine was green in tinge and in aromas. Lemon and melon notes competed with warmer tropical guava that surprised. This entry level wine had decent acidity and a moderate finish. The easy, youthful style made for easy drinking. 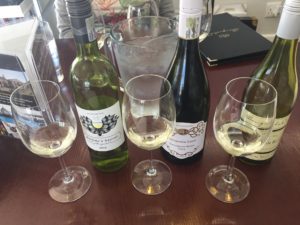 I enjoyed the opportunity to taste the 2015 and 2014 Sauvignon Blanc side by side. Both wines were lightly wooded (3 months) for a fuller body. The younger vintage was shy on the nose with delicate green notes of lime, gooseberry and zesty citrus. It was light on the palate but the wooded flavours showed as they mellowed in the mouth. I preferred the older sibling, my favourite of all the Sauvignons Blanc. The wine was more evolved and with a distinct mineral feel. I liked the extra aromatic intensity and grassy, citrus flavours of lemon and melon. It had fresh acidity and the best balance of the 3 wines, with a decent follow through to a firm finish. 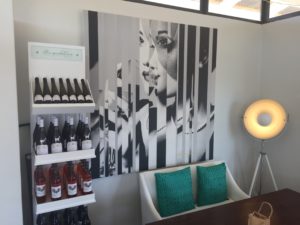 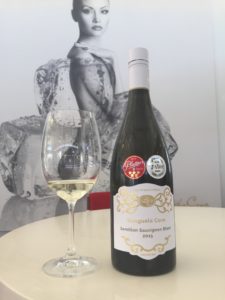 The white Bordeaux blend of 2:1 Sémillon to Sauvignon Blanc was the white wine I liked most. Wooded for 6 months, warmer ripe lemon, greengage and green melon notes gave great complexity on the nose and in the mouth. It was clean on the palate, aided by good acidity, with a strong follow through and a pleasant aftertaste. 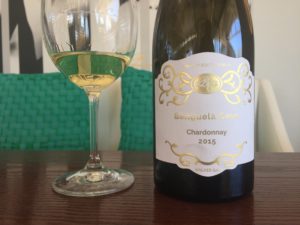 The Benguela Cove Chardonnay was a pale to medium straw in appearance. The wine, surprisingly, was shyer than the colour suggested. It was made in a light style with just 40% wooded for 9 months. However, the intensity grew with flavours of baked apple, citrus and honey developing on the palate. The delicate touch continued with a clean dry mouthfeel. 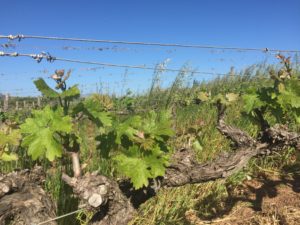 Benguela Cove is a relatively young estate with the vines being planted between 2002 and 2007. Owner and South African entrepreneur Penny Streeter took ownership with her family in 2013. It is clear that the development plans, like the vines, have fully yet to mature. 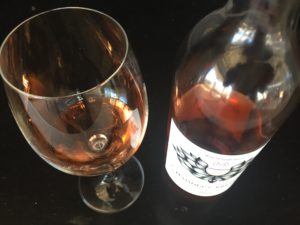 The Matilda’s Secret Rosé is made from the classic Rhone cultivars. Surprisingly, I learned that it is the only ‘SMV’ Rosé made in South Africa. Pale in salmon pink colour and body and made in the French style – cold fermentation of all the grapes together – the nose was a delicious mix of warm strawberries and light, white peppercorn. Moderate acidity gave a pleasant mouthfeel but I would have preferred more bite and firmness on the palate. 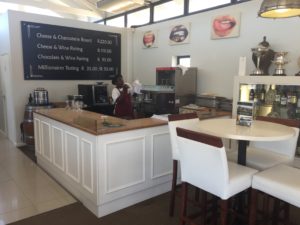 Pinot Noir, made with 2 clones from the 2007 planting, made sense as the first red wine to savour. Like the Rosé, it was pale and light in body. It too had a tempting warmth of cherry, cranberry and redcurrant aromas that showed a good intensity. Eighteen months of wood maturation gave body to the wine. I liked how delicate tannins emerged on the palate that balanced well the moderate acidity to give a clean mouthfeel. 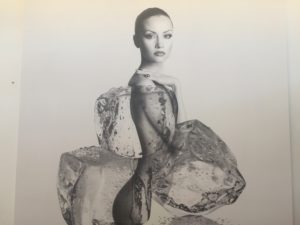 My favourite wine of the tasting was the Merlot, a notoriously difficult wine to make well. Misty, cool breezes help to prevent the grapes from ‘overcooking’ to produce a wine with delicate finesse and elegance. I rated it highly for all factors: for the medium ruby to garnet colour and body; for the complexity of red berry, cassis, cranberry and redcurrant aromas; and for balanced, rounded tannins (25% new, 25% 2nd fill, 50% 3rd fill French oak maturation) of good structure. This was one bottle at least to buy. 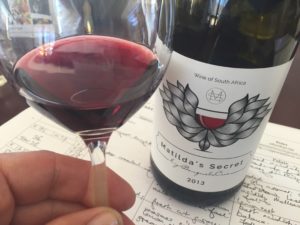 Merlot made up half of the Matilda’s Secret Red blend, the other half being Shiraz. Cassis and loganberry Merlot notes could be differentiated from those of blackberry and light peppercorn Shiraz on the nose. More peppercorn flavours emerged on the palate followed by soft tannins. Greater firmness and a longer finish would have made an even better wine but this was nonetheless excellent value for money at R70. 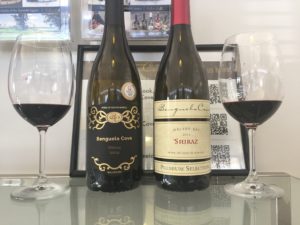 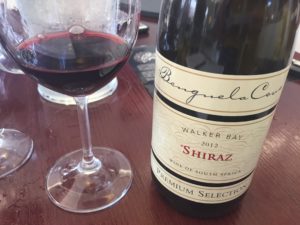 The final 2 red wines were Shiraz from 2014 and 2012 and priced at the same level. I wondered why the 2012 vintage was unsold and, if I remember correctly, a large quantity was ordered but not bought. I scored them much the same but the older vintage just shaded its younger sibling for greater intensity and complexity on the nose. Both wines were tannin-forward on the palate: the 2014 vintage was too astringent and needed to soften and balance whilst the 2012 wine was softer but still needing to balance to improve. The appearance and aromas differed. The 2012 wine as expected was slightly browner in deep ruby colour. The notes were of darker fruit – ripe blackberry, dark plum and dark cherry. In contrast, the 2014 wine showed a good intensity of cassis and blackberry with greater pepper spiciness. 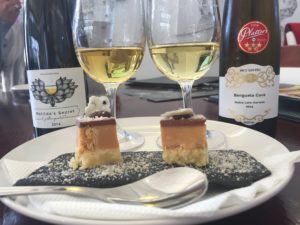 The tasting over, I could not resist the extra dessert wine tasting – R50 for dark chocolate Millionaire’s Shortbread with Natural Sweet and Noble Late Harvest wines. I am partial to sweet desserts and to dessert wines too! The shortbread was beautifully presented on a slate sliver on a plate. The Natural Sweet, made from Viognier, was the deeper gold of the 2 wines. The grapes are left to ripen and then hand-picked. The aromas were a gorgeous mix of marmalade, raising and apricot. The sweet taste followed through right onto the palate but was clean in feel to leave a slightly peppery aftertaste. 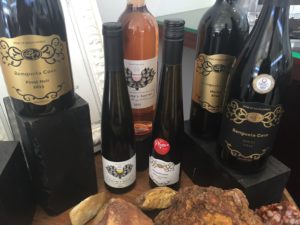 The Sauvignon Blanc Noble Late Harvest was even better if that were possible. Only made when conditions are right, the misty fog on the Southern slopes can produce the perfect damp, moist conditions for botrytis to desiccate the grapes. Raisin, dried peach, ripe pineapple and slight fungal flavours mingled in the glass and on the palate. 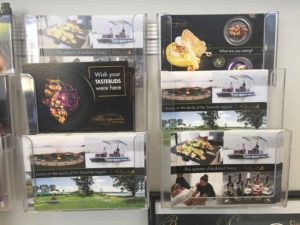 Of the pairings, the Natural Sweet was the better. The greater intensity of the wine matched the chocolate and caramel sweetness. The shortbread sweetness almost overpowered and flattened the flavours of the Noble Late Harvest. Nonetheless, both pairings were made in heaven for the chocoholic. 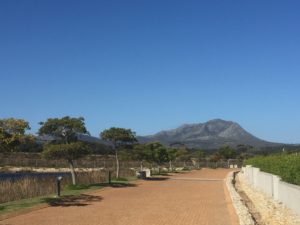 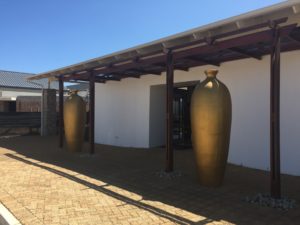 The Benguela Cove tasting was a thoroughly enjoyable experience. The estate was one I had wanted to visit for many a month. Henry was attentive without being pushy and I was well looked after. My criticism is only that many of the wines – the white wines and the Pinot Noir – were served too warm. Nonetheless, the nicely branded wines lived up to their expectation. They were obviously well made. Many wines were shy and delicate and I have yet to form an opinion whether that is the style of winemaker Johann Fourie or the region. It gives an excuse to return – and to make Benguela Cove my destination … 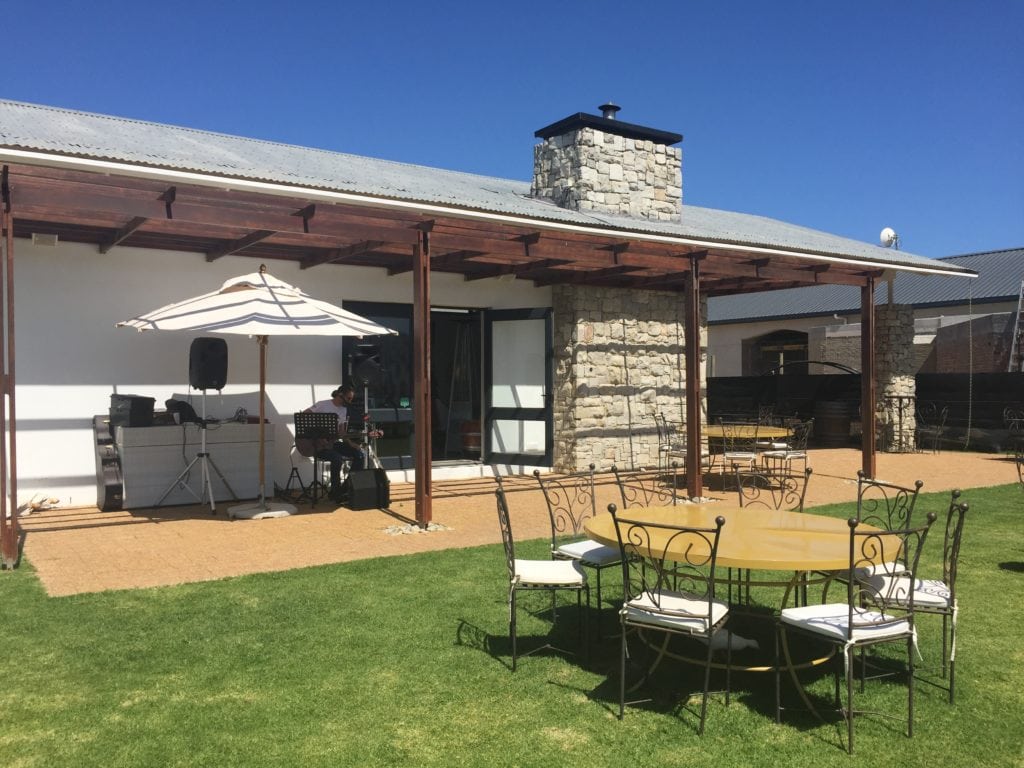