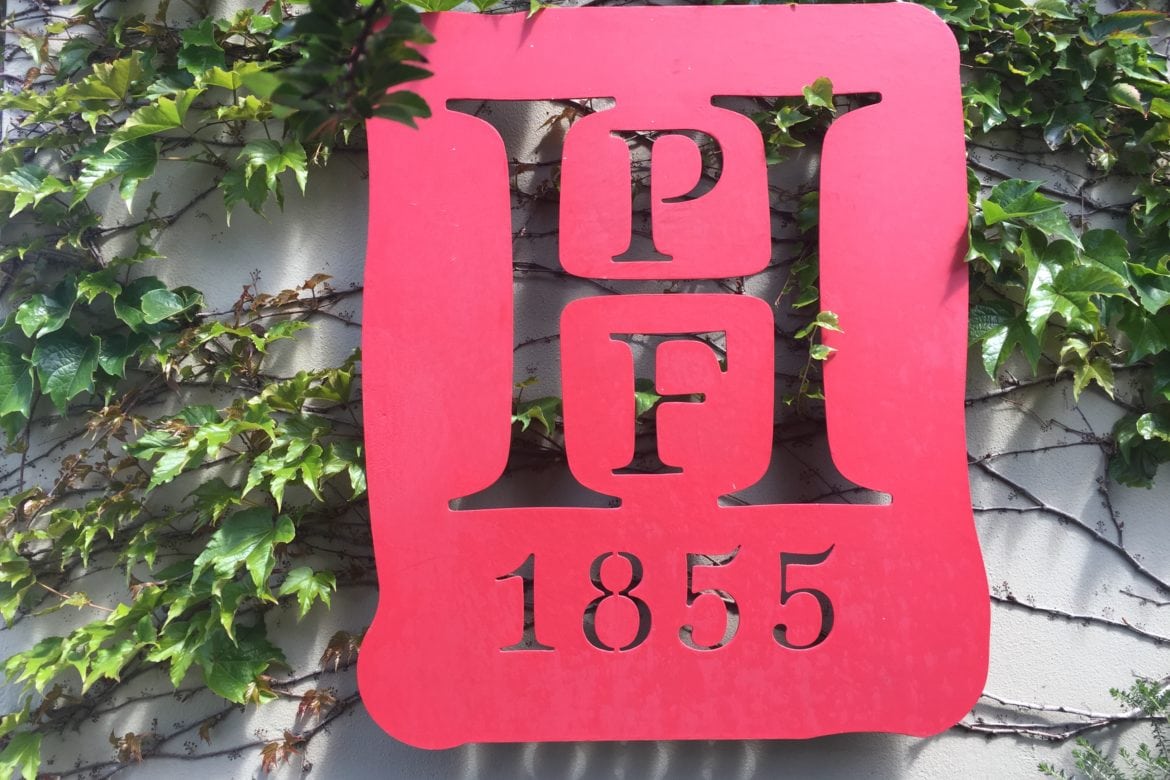 A weekend in Hermanus is always an exciting prospect. Even more so, as I had wanted to visit the Hermanuspietersfontein Wine Cellar for some time having sampled their wines at several events. It was a Friday afternoon when I arrived to meet winemaker Wilhelm Pienaar for tasting. I very soon learned that this was to be no ordinary tasting. Wilhelm welcomed me and very soon led me downstairs to the cellar. 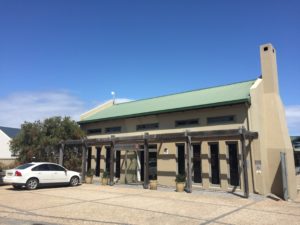 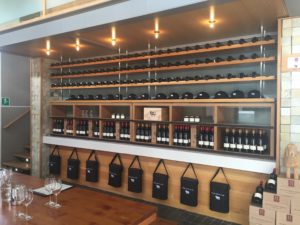 Hermanuspietersfontein is no ordinary wine farm either. It was one of the first urban wineries in South Africa, unusually being located in The Village mini-mall complex beside the R43 to the West of Hermanus. The grapes come from 65 hectares of vineyards between Hermanus and Stanford, from the little known Ward of Sunday’s Glen. Sondagskloof, as it is also known, is 50 kilometres from Cape Agulhas and some 25 kilometres from Walker’s Bay. Bathed by the Atlantic Ocean South-Easter breezes, the microclimate is 2°C cooler than the rest of Walker Bay. Rainfall is greater too than in Walker Bay and the duplex soils give low yielding vines. Consequently, as I was to discover, the Hermanuspietersfontein wines are European in style and Bordeaux-like in character. 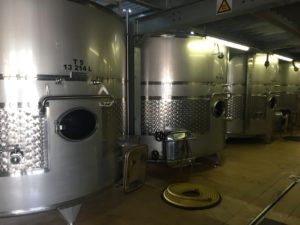 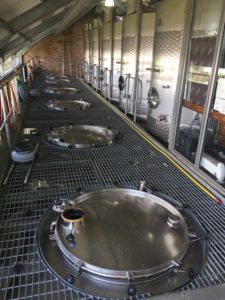 The cellar looked much like any other, with rows of large stainless steel tanks on one side and oak barrels of various shapes and sizes on the other. It is gravity fed and hence the wines are made without the use of pumps or pumpovers (pumpdowns only). The purist, minimalist approach to intervention thus emphasizes the wine style without compromising quality. Wilhelm explained his winemaking watchwords: BALANCE – no offensive or rough edges; ELEGANCE – to create an emotional connection with the wine; DRINKABILITY – good anywhere in the World, never hearing, ‘can drink when aged’; and AGEABILITY – structured to age from 5 to 20 years. 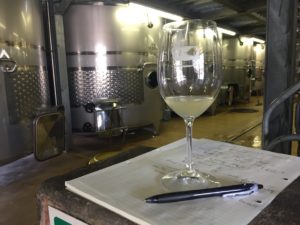 Wilhelm poured me a glass of cloudy Kaalvoet Meisie Sauvignon Blanc from one of the stainless steel tanks. A 2017 vintage that would be ready for bottling in November and for sale in September or October 2018, it already tasted good. Ripe green notes and fleshy, grassy flavours dominated. Wilhelm explained that if the structure and style were good then the aromas would follow. 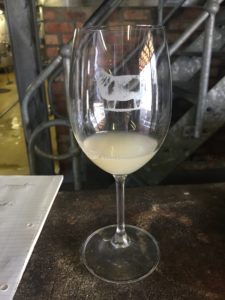 He poured the tank samples faster than I could write detailed notes as I tried to balance my glass and notebook and pen all together, while trying to take photos too. We tasted a sample Sémillon that was naturally fermented in old 500 litre barrels. This was not, as he explained also for a Sémillon-led white blend, for the oak flavours per se but to take advantage of oxygen management. Wines made in an oxidative style showed more mature flavours. Wilhelm was a feast of knowledge and I learned so much. 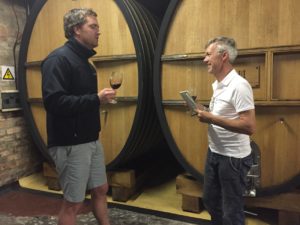 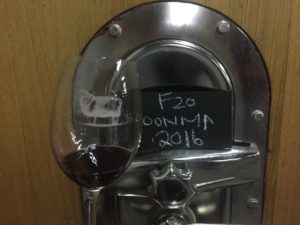 My mind was a blur – a good one – as we turned to sample the red wines. Most are matured for some 3 to 5 years before release which is longer than many a vineyard. The 2016 Skoonma Shiraz was halfway through its maturation. It showed a freshness and a vibrancy that promised much. Matured in 225 litre oak barrels, Wilhelm explained how they each bring different aroma profiles. These were detectable and used to determine the final flavour profile at bottling. 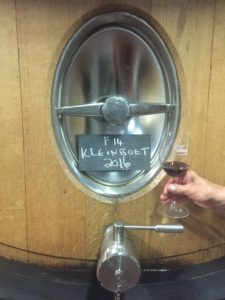 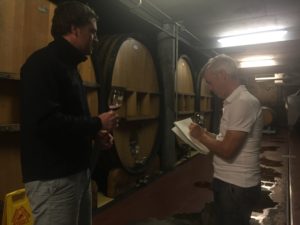 Hermanuspietersfontein makes two Bordeaux style wines, both using the same traditional Bordeaux cultivars but with different oak barrel treatments. The Kleinboet ‘baby’ Bordeaux focuses on fruitiness and freshness and is made for drinkability by being of a lighter style. The 5 grape varieties are blended together and then aged for 24 months in 6000 litre foudre barrels. Foudres are traditionally used for making white wines as they give the slowest exposure to oxygen but these were being used for the red blends. 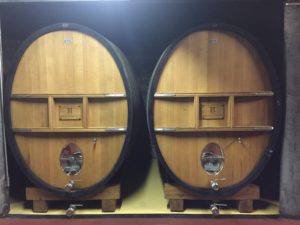 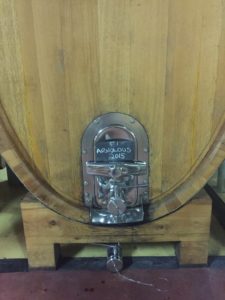 In comparison, the Die Arnoldus or the ‘big’ Bordeaux is made using a more intensive process. The blended wine is first matured for 24 months in new French 225 litre barrels and then for a further 12 months in 3500 litre foudres. The wine had spent 12 months so far in the smaller barrels and so had another 12 months to go. Wilhelm explained how each barrel brought a different flavour and structure to the wine – mocha, coffee bean, other etc – depending on how it was made. He quickly listed at least 10 factors that affect the end product: the cooper; the wood grain; how the staves are cut; stave thickness and width; the drying regime; the speed of toasting; toasting method; and more. I believed him when he said that he could taste, distinguish and describe the wine from every one of the 26 different barrels before us. 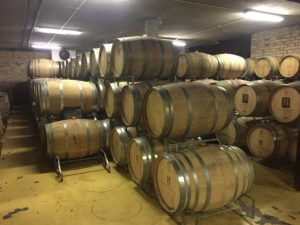 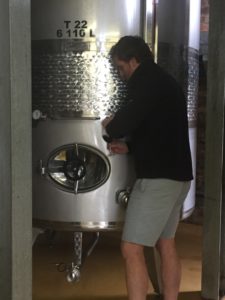 Wilhelm was most generous in his time and patient in answering all my questions. The time ‘below stairs’ passed quickly, almost too quickly, but I did not want to impose further on his Friday afternoon. I learned so much from him. I was especially struck by the thought that he put into his winemaking and the thinking behind it. Every step and decision was done or taken for a reason with the clear focus on making the best possible wine. I could well understand him when he said that it took at least 5 vintage years, perhaps longer, for a winemaker to begin to grasp the complexities of the source grapes and the winemaking for their vineyard and cellar. 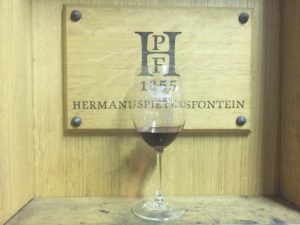 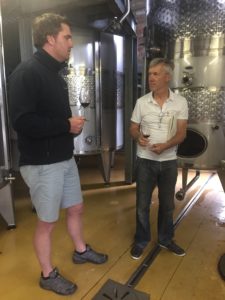 I bid him goodbye and ended my visit by tasting some different wines in the Tasting Room. The distinctive Hermanuspietersfontein brand sheep logo and witty signs and phrases tell the story behind the cellar, indeed behind the name of Hermanus itself. The farmers of the Overberg in the early 1800s preferred their children to learn Dutch (the forerunner of Afrikaans). The farm teacher was called Hermanus Pieters and was paid in sheep that grazed by the sea under the milkwood trees. After his passing, the village was founded in his honour in 1855. In 1902, the village postmaster shortened the name to Hermanus. 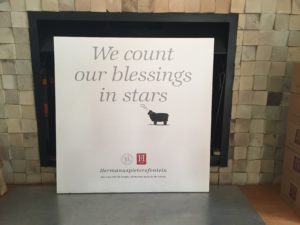 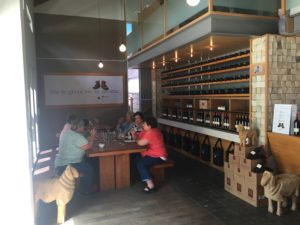 The Bloos Rosé was an immediate hit. Made too from a blend of all 5 Bordeaux varietals, it had a serious yet playful style. The strawberry and candy aromas hinted at sweetness but pleasantly surprised by being bone dry on the palate. I liked both the Swartskaap Cabernet Franc and the finished product of the Die Martha Rhone blend. The majority Shiraz of the blend shone through to make a well balanced and very drinkable wine. 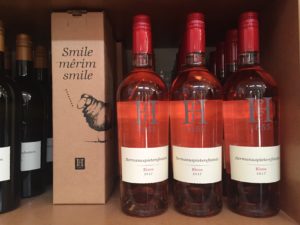 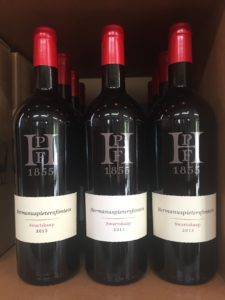 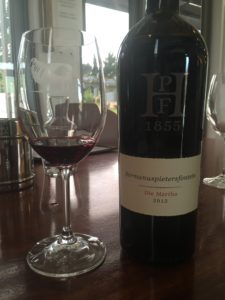 The Skoonma Shiraz intrigued. It was lighter in style than I expected – characteristic of a cool climate Shiraz but without the classic violet aromas – but nonetheless full of spicy fruit berry flavours. It makes a good choice for those who do not prefer a heavier Shiraz. The Brut MCC was not for tasting but I returned to buy a bottle on the morning after. I cannot wait to open it as I am sure it will live up to the high standard and quality of the other Hermanuspietersfontein wines I tasted. 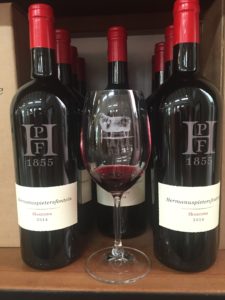 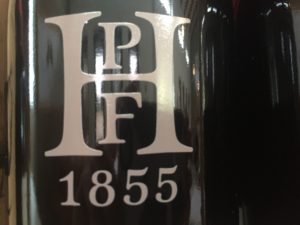 Hermanuspietersfontein surpassed my high expectations. Previous tasting of the wines gave hint of what to expect but the visit gave more. Wilhelm impressed, as many a winemaker do, and offered a different insight to a ‘standard’ wine tasting. It was a rare privilege to taste wines as they are being made straight from the tank or barrel and to gain insight and understanding of what the winemaker is seeking to achieve. I know that the visit today will not be my last. Indeed, I would go further by suggesting that a visit to the Hermanuspietersfontein cellar for tasting is a ‘must do’ whenever visiting Hermanus. 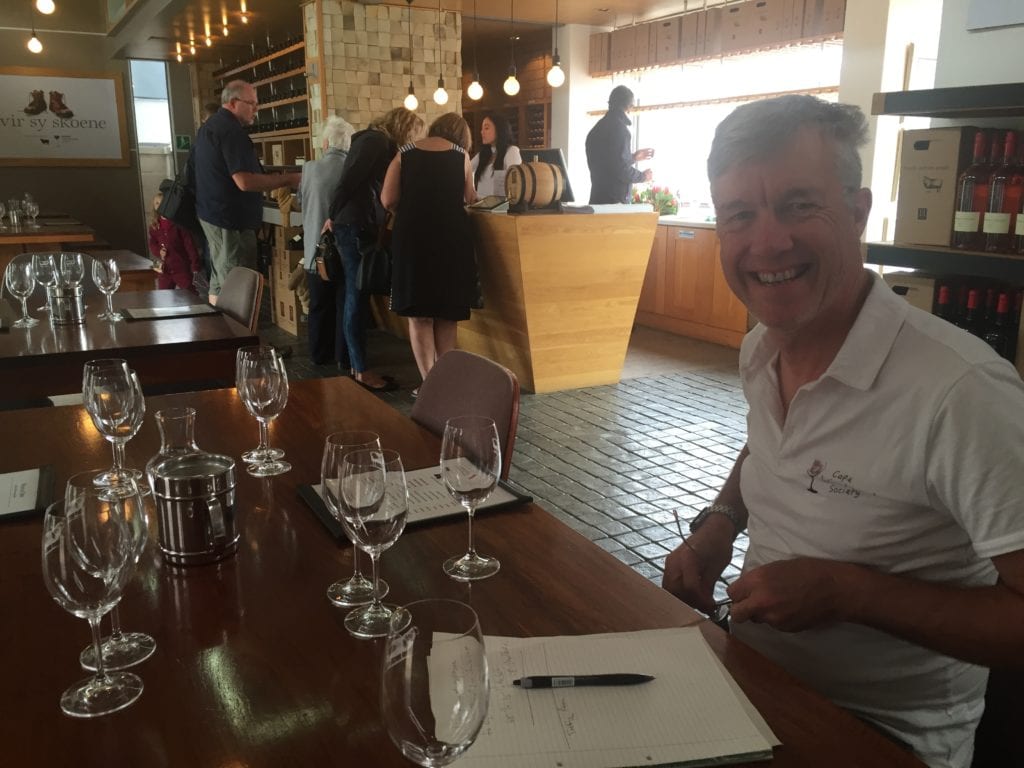