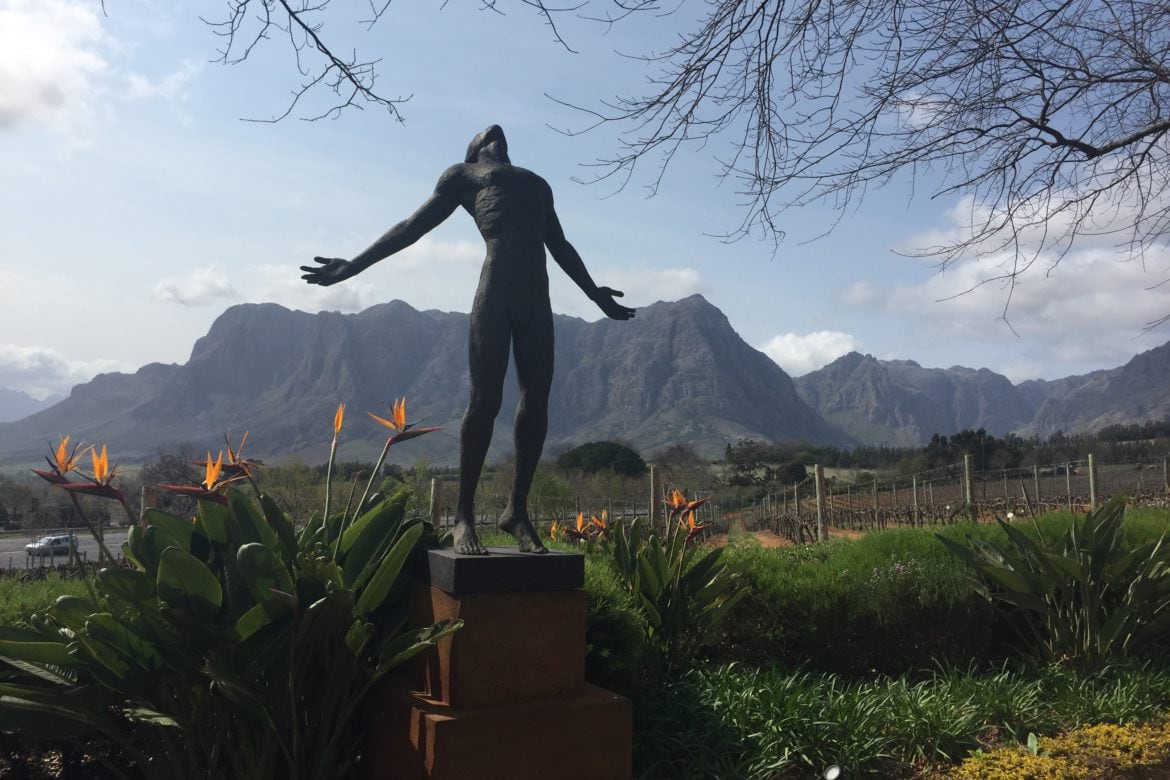 The view from Delaire Graff across the Helshoogte Mountain Pass that links Stellenbosch to Franschhoek – two of the Cape’s most famous wine-growing regions – was simply spectacular. The panoramic vista of the Simonsberg and to the Hottentot-Holland Mountains beyond was as picturesque and breath-taking as any I have seen at any wine estate. It is no surprise that it was love at first sight for Laurence Graff. 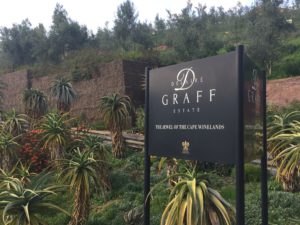 Equally magnificent was the botanical paradise of the approach road. Orange, yellow and red fynbos, daisy and bird of paradise flowers lined the curved entrance road as it swept up the hillside. One last turn and it straightened into a tree-lined avenue. Two bronze statues welcomed with open arms as the road flanked by herbaceous beds and low manicured box hedges led to the Restaurant and Tasting Room. This could have been one of the large stands at the Chelsea Flower Show but this was real and permanent and on a far grander scale. Vines eager to burst open their spring shoots were laid out in tidy rows on either side behind. 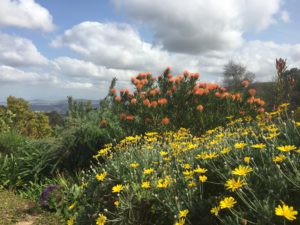 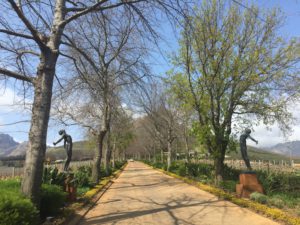 Laurence Graff, the London-born founder and Chairman of Graff Diamonds, acquired the property in 2003. Famed for exquisite jewellery and yellow diamonds, together with a passion for collecting modern and contemporary art, Laurence has transformed the estate into something truly glistening. The multi-faceted property not only includes a winery but also 2 restaurants, a boutique, diamond shop, 5-star lodge and spa. 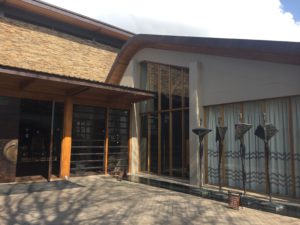 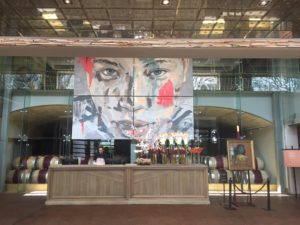 If not enough, the enormous double-storey entrance took my breath away. The Reception desk with huge artwork behind and magnificent bright flowers arranged to perfection in lime bottle green vases could easily have been from a London or New York Hotel. Beside was a Vladimir Tretchikoff Painting, a recent acquisition called ‘The Chinese Girl’. I knew not if it was the real painting or a replica. It mattered not. The only clue that this was a wine estate was the cellar behind, with French oak barrels resplendent in red coats and lined up with symmetrical precision. 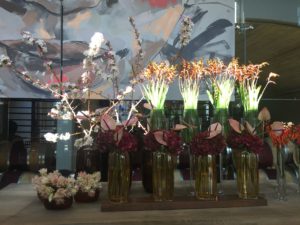 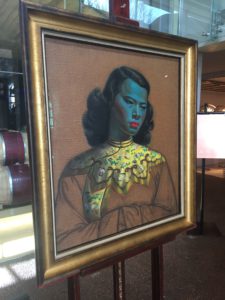 I learned so much after. Did you know that Helshoogte means ‘Hell’s Heights’? Or that John and Erica Platter, who started the Platter’s South African Wine Guide, were a previous owner? The high altitude vineyards on the slopes of the Botsmaskop Mountain Peak offer rich mountainous terroir and cooling sea breezes. I was surprised to read that the estate was just 42 hectares in size as I had expected grander and larger. Twenty hectares are under vine to grow the ‘Big 5’ Bordeaux red cultivars, together with Sauvignon Blanc and Chardonnay. Surprisingly perhaps too from the Stellenbosch location, Delaire Graff is better known for its Sauvignon Blanc and Chardonnay white wines than red wines, though Cabernet Sauvignon deserves a mention. 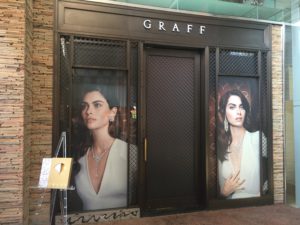 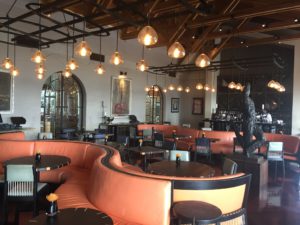 The Tasting Room was under refurbishment and enlargement and so Amos, my well-dressed and equally well-spoken and knowledgeable sommelier host, took me through to a laboratory-style office above the Cellar for my tasting. We could have tasted on the restaurant terrace overlooking the mountain pass, the temporary location pending work completion, but I sensed he wanted me to focus entirely on the wines and without distraction. 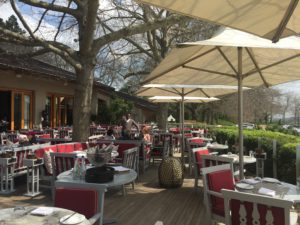 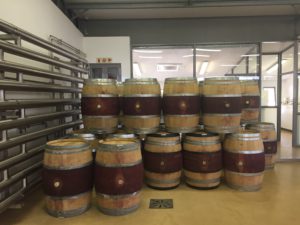 It was a good plan as I was able to see the modern cellar, built in 2008, that is one of the most advanced in the country. The cutting edge 450-tonne gravity fed winery, in glistening stainless steel, could equally have been a piece of art. By now, I was eager to taste some wines. 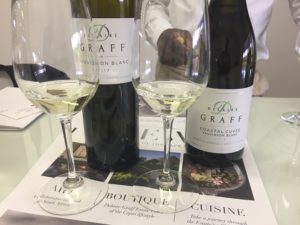 I began with 2 Sauvignons Blanc that were sourced with grapes from different regions. The first, made with grapes from across the Cape, was a signature, shiny very pale straw in colour, as shiny as a diamond. Classic green gooseberry, herbaceous, asparagus and lime aromas intoxicated. The wine had a natural high acidity that was crisp but with rounded edges. Bright and fresh in the mouth, it set a gold standard for other wines to follow. 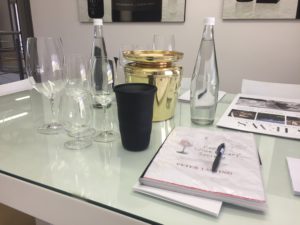 The Coastal Coastal Cuvée Sauvignon Blanc, also with a dash of added Sémillon, was fruitier with flavours of green citrus, guava and gooseberry. The grapes from Durbanville, Stellenbosch, Darling and Franschhoek, made for a wine with a softer and fuller mouthfeel but still with good acidity. 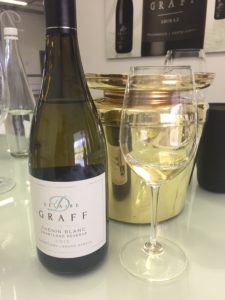 The Swartland Reserve Chenin Blanc, made from older bush vines in the same style as the Sauvignons Blanc, showed a shy, moderate intensity nose of lemon, lime, honey and honeysuckle. Gentle oak maturation from 10 months in 1st/2nd/3rd fill French oak became evident on the palate. Medium-high acidity gave minerality in the mouth but the shy flavours fell away too soon. 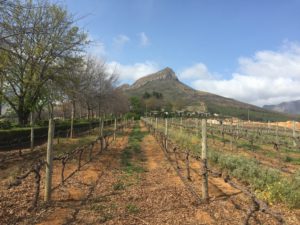 I picked out the cultivars in the Bordeaux-style White Reserve: Sauvignon Blanc and Sémillon. The 2 cultivars make good partners and combined for a smoother, creamier mouthfeel with good complexity of warm herbaceous and citrus flavours. 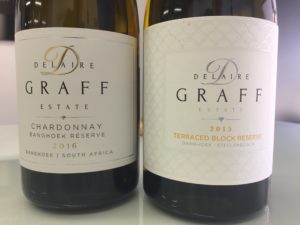 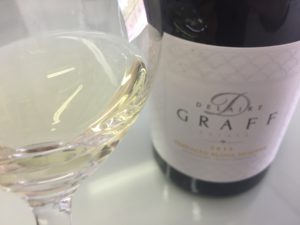 Not to be outdone, 2 Chardonnay were next on the tasting menu. I rated these equally highly. The Banghoek Reserve was the best wine so far. The green apple, citrus and vanilla flavours were subtle and refined, bright but not sharp, and with a softened character from 10 month’s oak maturation in 40% new French barrels. The sister Chardonnay, the Terrace Block Reserve, showed excellent intensity and complexity of flavour. Handpicked bunches from North and East facing vines in a single vineyard block produced ripe apple, pear fruity, nutty aromas. I liked the smooth intensity on the palate and the long finish. 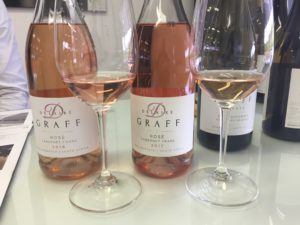 Amos and I were on a roll. I enjoyed his knowledge and experience from working in a number of roles on the estate during 3 years at Delaire Graff. He enjoyed offering the wines to an enthusiast and student of wine. Rosés are currently one of the darlings of the South African wine industry. The 2017 vintages have been released for a couple of months now and will likely sell out sometime after Christmas. The tasting included a 2017 Cabernet Franc Rosé but Amos kindly disappeared to return with a 2016 bottle. It made a great opportunity to compare the two. 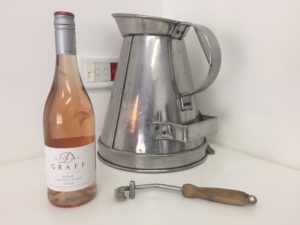 Made with similar, minimal skin contact (2 to 3 hours) and using a Sauvignon Blanc method of production, the 2 wines were not the same. The younger vintage had a pale orange tinge to the pale salmon colour. Bright yet shy, simple strawberry and candyfloss aromas filled the glass. It was crisp and almost-but-not-quite dry on the palate. The older brother – I hesitate to mention the new term ‘Brosé’ – was fuller and brighter in character. I preferred the sweeter strawberry and nougat flavours together with the denser mouthfeel and more delicate crispness. 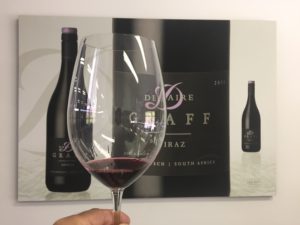 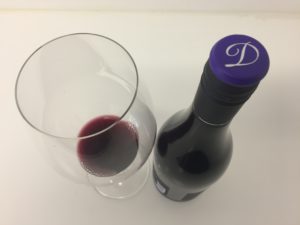 The tasting ended with just 2 red wines that were served in larger glasses. The Shiraz came in a stunning black bottle with deep purple cork cover embellished with the italic ‘D’ for Delaire Graff. The wine was as good as it promised. I liked the lighter style and medium body. It was anything but light on the nose, with complex and intense aromas of pale white pepper and spicy black berry fruits. Less heavily oaked than many a Shiraz (12 months in old French oak barrels) the tannins were positive and restrained for a firm finish. 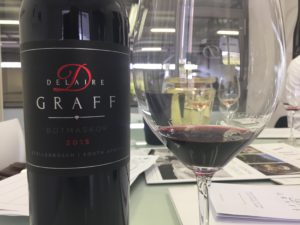 My favourite wine of the tasting was the last. The Platter 5-star Bordeaux blend shone in every rating criterion: luscious medium-full body in appearance; bold, fruity, layered complexity of red currant, blackberry, cassis and black pepper spice aromas on the nose; and beautifully balanced and prolonged on the palate. The wine is named after the Botmaskop on whose slopes the estate vines grow. Botmaskop means ‘Boatman’s Peak’ and was the original lookout from which sentries would alert the local farmers when ships were entering Table Bay. This enabled them to take their produce to sell to sailors from the ships in Cape Town. 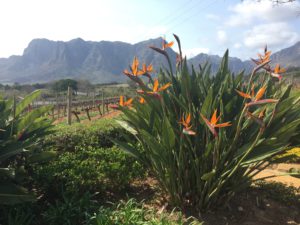 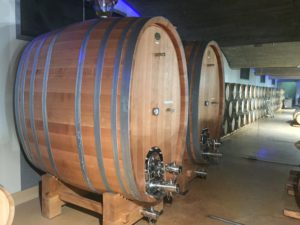 Delaire Graff wines shone bright. The white wines glittered in their character and flavour whilst the reds showed a deeper ruby complexity and style. The proof of any estate, however well-appointed or with however many competing attractions, lies in the quality of the wines and experience of the tasting. Amos was an engaging and interested sommelier that always makes for an informative and rewarding tasting. Sadly, in my experience, that is not a given for even the best named or renowned estate. Delaire Graff sparkled throughout, in both the wines and the experience. The estate truly is a ‘Jewel of the Cape Winelands’. 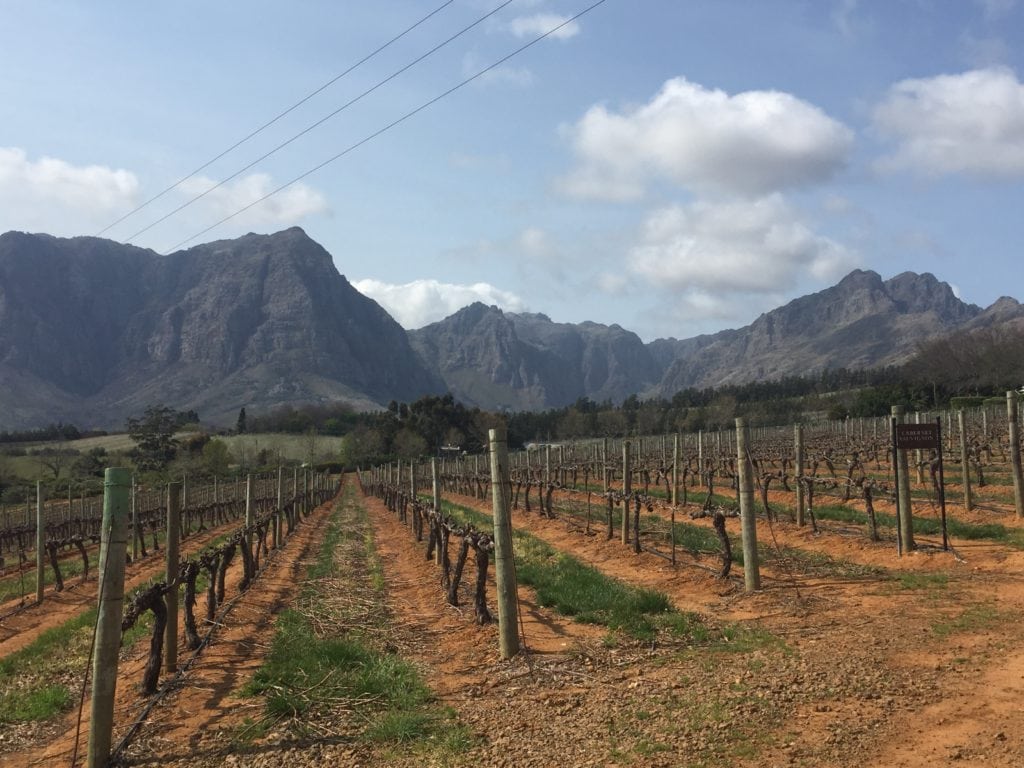