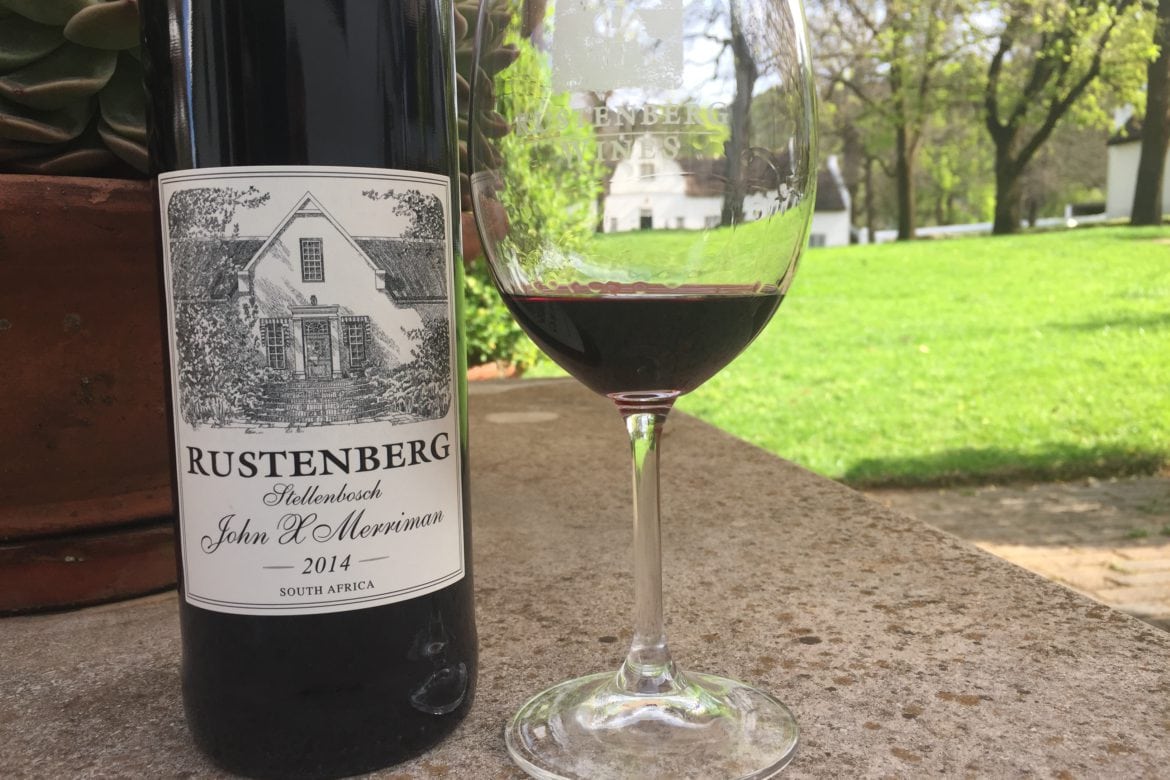 Head up Ida’s Valley North-East of Stellenbosch and you will find a lovely road through rural countryside. The road continues for a further 2 kilometres past the entrance gate, passing private homes, green pastures and vines until reaching a magnificent secluded view of Cape Dutch homesteads. This was surely a hidden secret off the beaten track. Rustenberg dates back to 1682. The first wine grower, in 1781, was Roelof Pasman, a German from Meurs near the Rhine. As one might expect from a wine farm with a long history, much has changed. 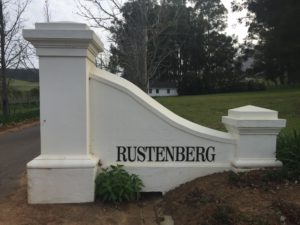 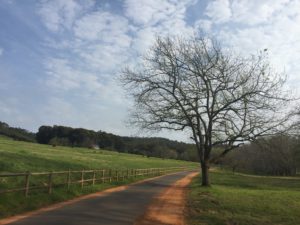 The estate was divided into 2 properties in the early 1800s – Rustenberg and Schoongezicht – and winemaking peaked at around 1812. The phylloxera disease devastated the vineyards in the late 1880s as it did with so many of South Africa’s wine farms. It was much later, after 1941, that the 2 farms were reunited by owners Peter and Pamela Barlow. Son Simon took over the farm in 1987. The family, with wife Rozanne and after son Murray, restored the gardens and replanted the vineyards with virus free clones and new varieties. 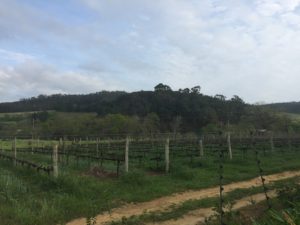 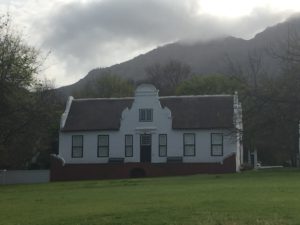 Today, 110 hectares of the 880 hectare property are under vine on the rich slopes of the Simonsberg. All the big name red and white cultivars are grown together with some less common varieties such as Grenache Noir and Blanc, Petit Verdot and Roussanne. Rustenberg was first in South Africa to grow the Northern Rhône grape Roussanne and to make a single variety wine from it. More than 80% of all wines produced are exported to over 30 countries as far afield as North America, Europe, Africa, the Near East and Far East. The remainder is either available only to buy from the Cellar or sold in Makro, Spar and PicknPay. The latter surprised given the quality and price point of the wines. 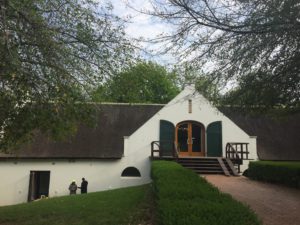 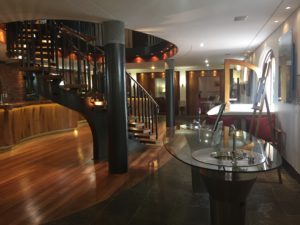 The Tasting Room is approached by a spiral staircase that leads down to a bright wood lined and floored room. Spittoons unusually are in the form of sinks set into glass counters. There is a small sitting room at one end of the room. Behind, the Tasting Room leads out to a tranquil sitting out area that faces the courtyard and elegant white-painted Cape Dutch buildings. 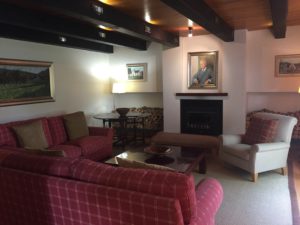 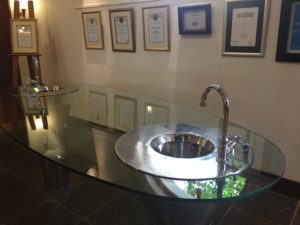 Elsabie was my cheery and knowledgeable tasting host (R25 tasting fee, waived on bottle purchase). She was insistent that I tasted as many of the wines as possible. Sadly, the Roussanne was sold out, the harvest having suffered smoke damage from bush fires in 2016. The majority wines fall into the Rustenberg Regional Range (easy drinking wines made with grapes from the Stellenbosch area) with the best wines reserved for the Flagship Range (fuller bodied) and Site Specific Range (from blocks at the top of the farm). 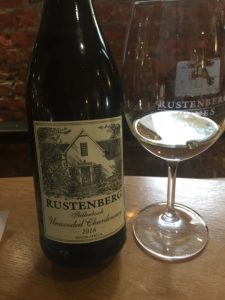 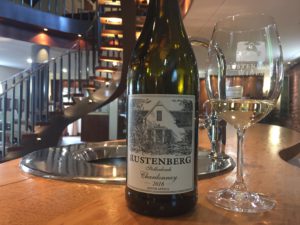 I tasted 2 whites and the Petit Verdot Rosé to start. It was interesting to compare the 2 Chardonnay, one unwooded from the Regional Range and the other lightly wooded (12 months in 25% new French oak) from the Flagship Range. Both were decent wines. The unwooded Chardonnay was fresh and bright with little malolactic fermentation to make for a light, clean mouthfeel with flavours of apple, citrus, pear and light apricot. Immediate baked fruity apple and caramel aromas filled the glass, well balanced on the palate, to make the wooded Chardonnay my favourite. 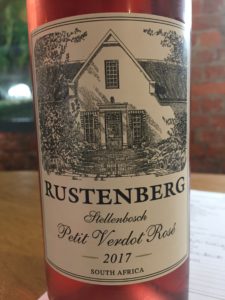 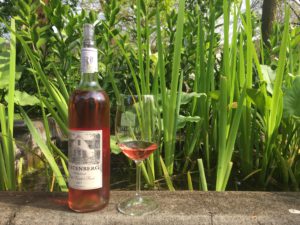 The Rosé was a glorious mid-blush to medium-salmon in colour from the thick skins of the Petit Verdot grape. Made for the 5th year, and requested by the UK, shy ripe strawberries and cranberry aromas gave moderate complexity on the nose. It was pleasant on the palate with a dry to off-dry character that I enjoyed, enough to buy 2 bottles. 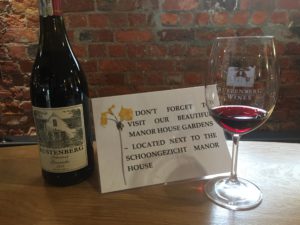 Grenache is one of my favourite wines and always a good alternative to Pinot Noir. This was made in the Pinot Noir style, using 12 months in old French barrels, and produced for the 2nd year as a single variety wine. Vibrant, intense forward aromas of cranberry, bitter-sweet cherry and redcurrant promised much in the glass but fell away a little on the palate to give a light mouthfeel with a firm acidity. 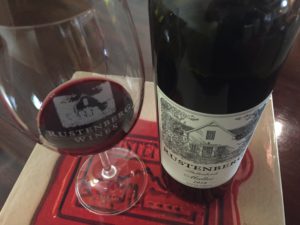 Malbec, from the same 2016 vintage and price, is another new wine at Rustenberg. Released a month ago, it was full-bodied and cCbernet Sauvignon in character with ripe fruit flavours of red plum, blackberry, mulberry, blackcurrant and mint. Firm tannins from 15 months’ maturation in 10% new and 2nd/3rd/4th fill oak gave good structure and a decent finish. 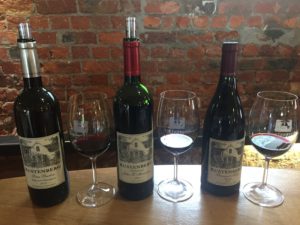 The next 3 wines I tasted were from the top 2 rages. The Buzzard Kloof Syrah, so named after the Jackal and Step buzzards that fly in the kloof where the grapes are grown, was full bodied. Spicy rich cassis and dark plum flavours integrated with big tannins on the palate – 20 months in 40% new French oak and 60% 2nd/3rd fill American oak contributing – that left a slight bitterness that will improve with ageing. 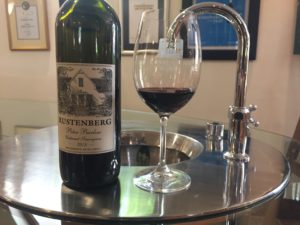 The Cabernet Sauvignon-led Bordeaux style blend and single variety Cabernet Sauvignon were my favourite wines of the tasting. Named after a previous owner of Schoongezicht who later became Prime Minister of the Cape, the John X Merriman blend showed great complexity of juicy fruit flavours from the 5 Bordeaux varieties. Tannins were firm and slightly rounded on the palate. The site-specific Peter Barlow Cabernet Sauvignon was even better. Full bodied and with a delicious inviting nose of potent plums, berries and currants, the tannins were smooth, lingering and well balanced. This was a big wine (14.5% alcohol content too) and made to last for another 10-15 years. 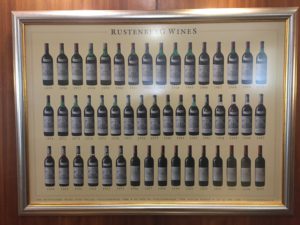 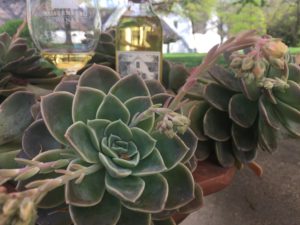 Straw wines are sweet dessert wines made since the pre-Roman times by drying grapes on straw mats to concentrate the juice. The Rustenberg straw wine was a recent vintage and paler in colour than most I have sampled. Always a pleasure to drink, I enjoyed the layered raisin, apricot, guava and honeysuckles flavours and clean, sweet mouthfeel. 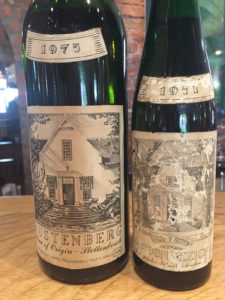 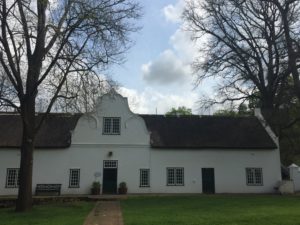 I left historic Rustenberg with a smile on my face. Located to the North East of Stellenbosch and more isolated than many of the surrounding wine farms, it is well worth a visit. The wines with their classic, historic labels, were honest, decently made and offered a good selection of cultivars and styles. They are predominantly red and I could have chosen to taste Sauvignon Blanc too. I did not have time to explore the formal English-styled Schoongezicht Garden, or the rest of the grounds, which is something I now regret. It gives excuse though to Rustenberg visit again – and, hopefully, to taste the Roussanne also. 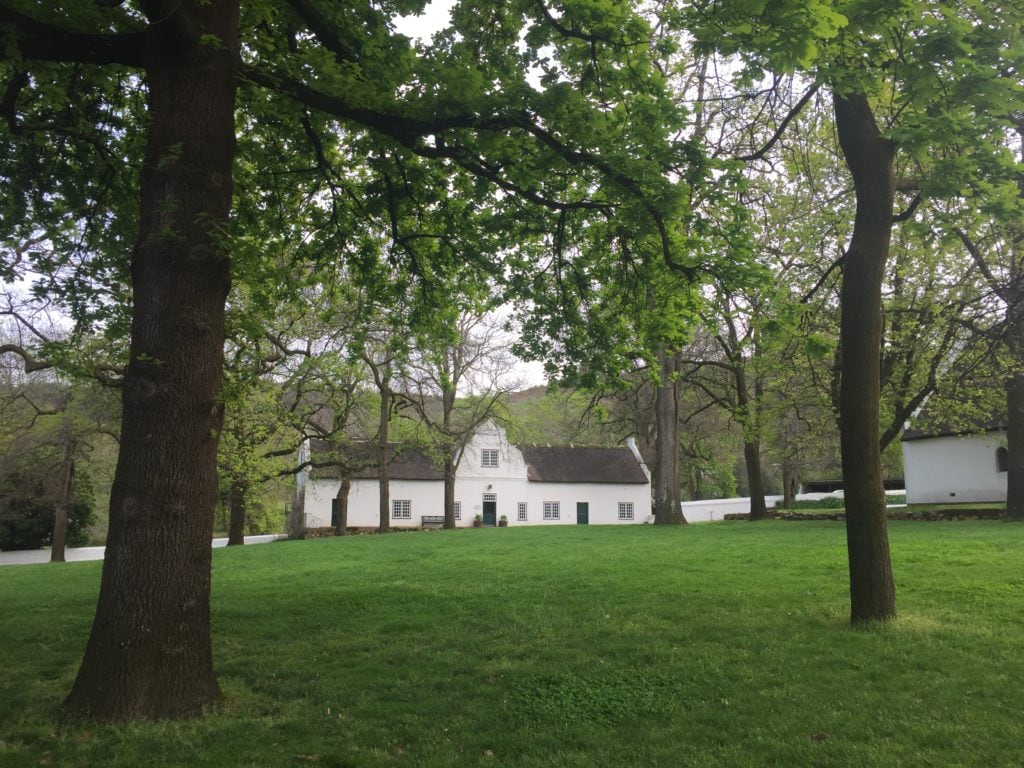