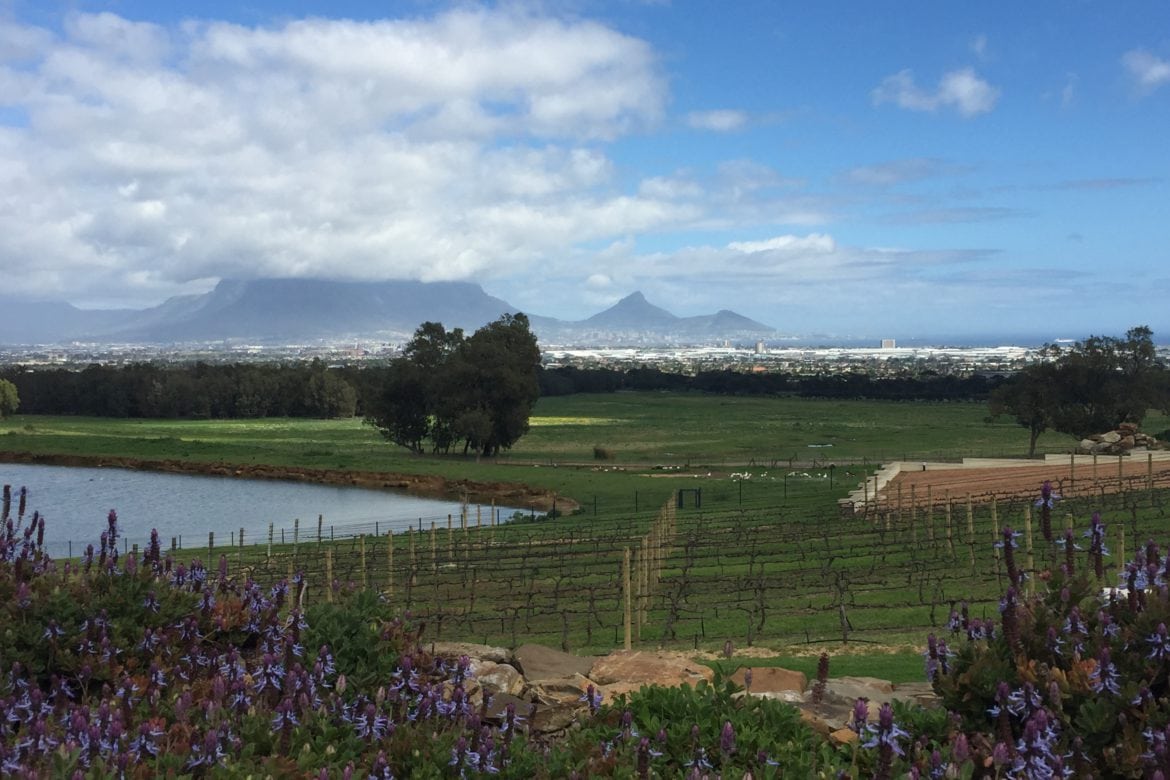 I looked carefully at the interior décor as I walked through the cellar building towards the Tasting Room. What culture? What history? What life story did I see? The heraldic family crest was certainly British in character and told a story in itself. Rusty cannons spoke of previous wars and struggles, perhaps Dutch or perhaps Boer War. The rattan chairs, classic Delft blue and white jugs and vases together with ginger jars, reminded me of my time in the Hong Kong and the Far East. Matching blue and white china under-plates, hung in neat circular symmetry in the more contemporary Tasting Room. In between were metal axes with wooden handles that looked African, perhaps another instrument of war or put to more peaceful use to clear indigenous fynbos for the vineyards. De Grendel immediately interested. 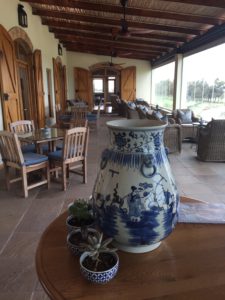 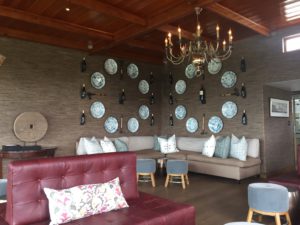 I had passed both game – a bontebok galloped past in a pasture beside the driveway to the car park – and domestic goats and fowl beside the dam below the cellar building. I noticed a sign too, soon after entering the property, for the De Grendel stud. Holstein and Friesland cattle, SA Mutton and Vleis Merino stood in classic pose against the backdrop of Table Mountain. Table Mountain was clearly visible clothed in low cloud beyond Table Bay in a magnificent 270 degree panoramic vista from the elevated Tasting Room, in classic silhouette between Devil’s Peak, Lion’s Head and Signal Hill. 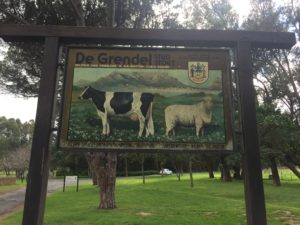 For reasons unknown, I thought I had visited De Grendel before founding the Cape Wine Lovers’ Society. This was not the case and so I was excited to be somewhere new. My arrival was politely and efficiently dealt with by the guard at the gate who scanned my driving licence and vehicle tax disc. The tree-lined drive led to an intriguing cellar building. Neither classic Cape Dutch farmhouse (as I might have expected given the historic legacy of the Graaff family) nor contemporary modern, the long low cream-coloured building could have been built at anytime between the 1970s and 1990s. Goats played on a pile of rocks beside the full dam below. 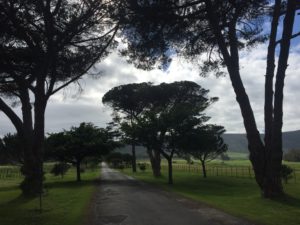 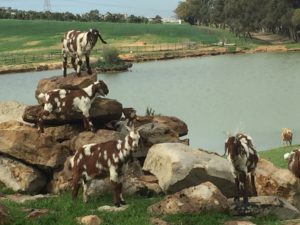 Social history interests and so I was fascinated to listen to my knowledgeable sommelier Darrin. De Grendel is Dutch for ‘latch’ and was the original gateway that had to be opened to cross the Tygerberg Hills inland to Durbanville and Stellenbosch. The farm was established in 1720 and has been owned by the Graaff family since 1891. Sir David Pieter De Villiers Graaff started life as a poor farm boy from Villiersdorp and, at the age of 11 years old, left home to work as a butcher’s assistant for a relative. At the age of 22, he founded with his brothers the Imperial Cold Storage Company as they developed the ability to refrigerate meat. It became one of the largest meat storage companies in the world. 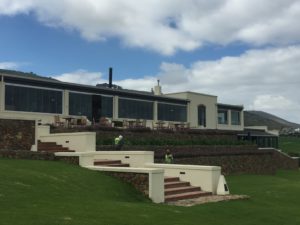 Sir David was not only an entrepreneur but also a visionary and politician. He was a Cape Town Councillor at the age of 23 and Mayor at 32 years. He modernised the city by bringing in street lights and sewerage, and helped build the first cable car on Table Mountain. He was a prominent politician before and after unification and in 1910 served in General Botha’s first cabinet at the founding of the Union of South Africa. 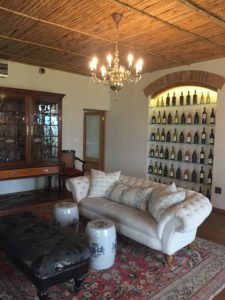 He bought the De Grendel property in 1892 to stable Arab horses he imported to Cape Town from Argentina. Soon after, he was knighted by King George V for selling meat and helping with cold storage for the British troops during the Boer War. The original estate was vast, more than 880 hectares, encompassing adjacent farms from Tijgerhof to Ysterplaat Airfield, Montague Gardens to Paarden Island and the Ascot Racecourse in Milnerton. 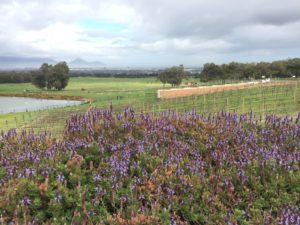 Sir David was a 50-year old bachelor when he received the hereditary title, a lineage that lasts for 10 generations. He married a clergyman’s daughter 30 years his younger 3 years later. Three sons were born. Grandson and 3rd Baronet, Sir David Graaff retired from politics after the 1999 elections to concentrate on farming. He had the vision to plant vines and build the cellar at De Grendel. Originally just 10 hectares of Cabernet and Merlot, today all the major white and red grape cultivars are grown on the 110 hectares under vine. The remainder of the land is used to breed award-winning cattle and sheep and to protect the highly endangered ‘Renosterveld’ fynbos. 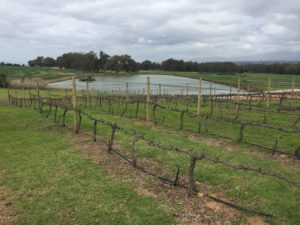 I digress from the wine but the De Grendel story is so interesting. Much more is included in the comprehensive website. Two tasting options are offered: R80 and R60 for Flagship and Premium tastings, respectively. The fee is not waived on purchase. I opted to taste all. The cellar has glass windows and designed with Feng Shui principles, combining ancient philosophy with modern practices, which allow visitors to watch the winemakers at work. The MCC Brut, excellent value at R185, was the perfect opener. It was served at just the right temperature in classic champagne flute. A constant stream of bubbles gave a clean moussante mouthfeel to accompany delicious flavours of lightly stewed apple, biscuit and toasted brioche. 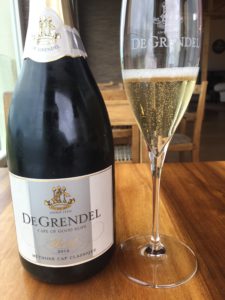 Also great value for money, the French-styled Pinot Gris showed delicate aromas of sweet apple, pale pear, white peach and pale lemon. I liked the slight creaminess on the palate, from 100 days maturation in 20% new Romanian oak, which balanced medium dry acidity with a moderate finish. I bought a bottle but should have bought more as the wine, more commonly made as Italian-styled Pinot Grigio, is being phased out. 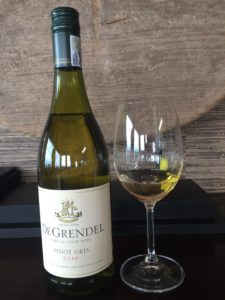 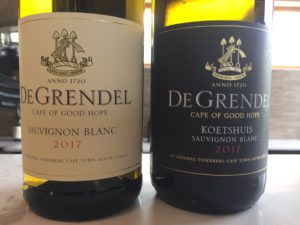 Next I compared 2 Sauvignons Blanc, both 2017 vintage, one unwooded and fermented in stainless steel tanks and the other made in modern style, spending 100 days in 2nd/3rd fill French oak. I liked both and rated them equally. The first was surprisingly smooth for its youth and with lively herbaceous aromas of green herbs, gooseberry and greengage. The Koetshuis, so named as the vines grow next to the old coach house (‘koetshuis’ in Afrikaans), was mineral in character with flavours of lemon, lime and green fig. It too was bright and with good clean acidity. 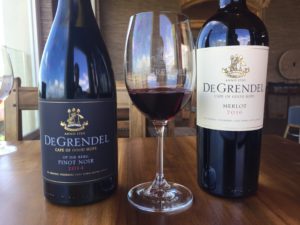 The Graaff family own a farm in the Witzenberg Mountain range in Ceres, from which grapes for the Op Die Berg Chardonnay and Pinot Noir are grown. The wines must be some of the few with Wine of Origin ‘Ceres Plateau’ and from one of South Africa’s coldest wine growing regions. The Chardonnay was my favourite wine of the tasting. Lightly oaked from just 6 months in 1st/2nd/3rd French oak, flavour, acidity and alcohol content harmoniously balanced. I liked the defined creaminess on the palate that matched the baked apple, caramel and butterscotch aromas on the nose. 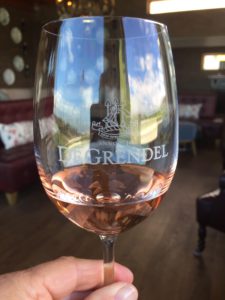 The moderately dry Pinot Noir showed surprisingly sweet cherry and red cranberry notes for the cool climate in which the grapes are grown. Firm tannins emerged on the palate that had a slightly bitter aftertaste. In contrast, the Pinotage Rosé, pale salmon in colour from just 2 hours’ skin contact, offered less tannin and high, dry acidity. This was not a demanding wine, nor meant to be, as shy candy and strawberry aromas filled the glass. 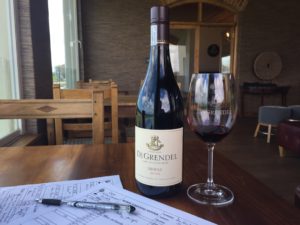 I sampled 3 red wines, single variety Merlot and Shiraz and the flagship blend called the Rubaiyat. The Merlot and Shiraz have recently been released. Both wines offered characteristic flavours: fruity and slightly spicy red cherry, redcurrant and blackcurrant for the Merlot; black peppercorn spicy dark berry and blackberry for the Shiraz. They offered good complexity on the nose, the Shiraz especially, with tannins emerging on the palate. I preferred the Shiraz, only just, being lighter in style than expected. Ageing will improve to develop and soften coarse tannins and also to bring fruit, tannin and alcohol content into balance. 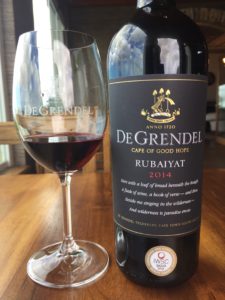 The Flagship Bordeaux-styled blend, the Rubaiyat, is made from a ‘quatrain’ of varietals, notably the 4 traditional cultivars less Malbec. The Rubaiyat was named after Omar Khayyam’s collection of 1,000 Persian love poems from the 10th century. A quatrain is a poem of 4 lines and reflects 4 tenets of the poems: good food, good wine, good song and good women. Rich medium ruby in colour, the wine lived up to its promise. Bold, aromatic, forwards and full of great red and dark berry Cabernet Sauvignon flavour, this wine balanced well. It is certainly a wine to buy and keep. 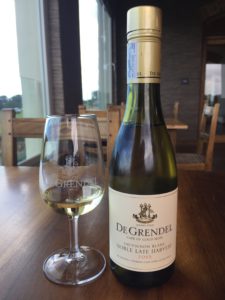 Another favourite, and my final wine of the tasting, was the Noble Late Harvest. Unusually made from Sauvignon Blanc grapes – I cannot recall another NLH made from the variety – it exuded smooth sweet flavours of grapey apricot, litchi, lemon, lime and green pepper. Fortunately, it has a relatively low alcohol content (just 9.5%) for I could have drunk far more than offered. I bought a bottle to savour at home.

De Grendel is a must for anyone in Cape Town, or surrounds, to visit. It must be as close if not closer for many than the Constantia vineyards. Excellent wines matched friendly hospitality that matched the most superb panorama of the City. I am told views the sunset are equally spectacular. The estate does not shout its history or legacy, though relatively young in wine-making terms. The wines more than speak for themselves by offering a comprehensive range with quality throughout, and at a range of price level. That is no easy task and not to be taken for granted. I bought 5 bottles of wines which, given that I generally buy 1-2 bottles at most, is testament to the De Grendel winemaker. 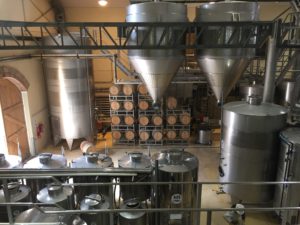 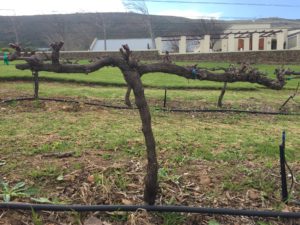 I read that the restaurant is open for dinner from Tuesday to Saturday. Reminder to self: make an appointment to return for the sunset and an evening meal soon! 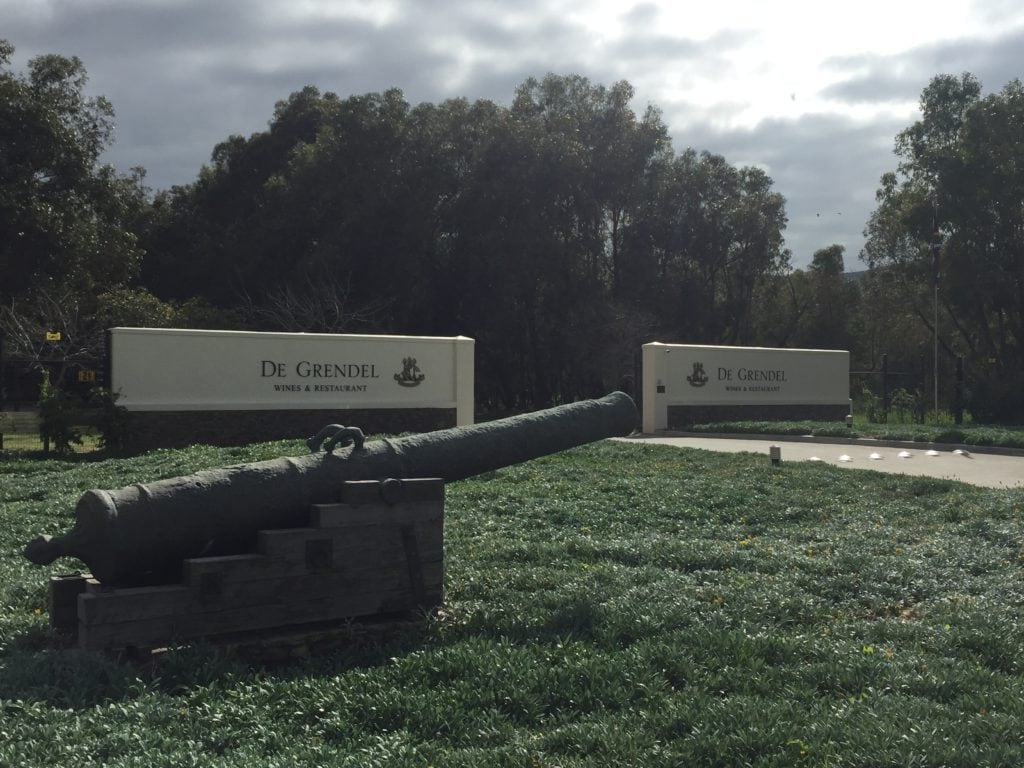