From South Africa to a Whole New (and Old) World 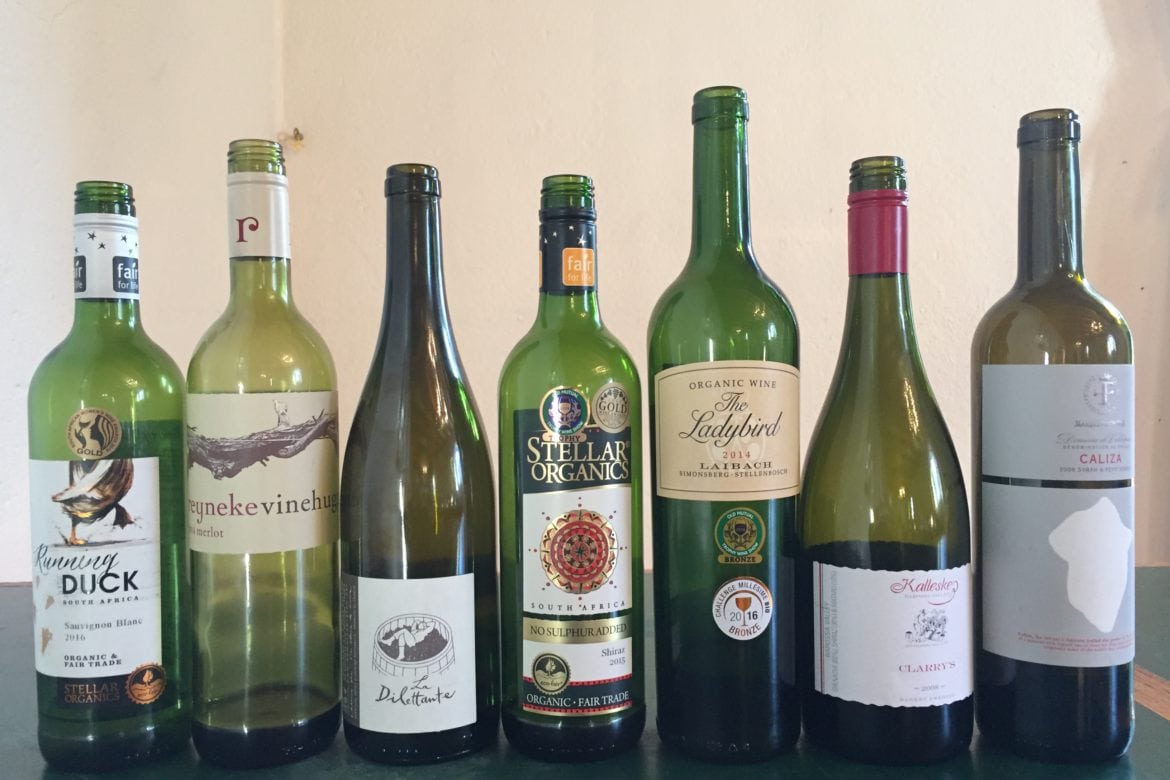 It was déja vue time as I arrived at Morgenhof wine estate for the start of my Diploma Wine Course with the Cape Wine Academy. I was last here in March – was it really that long ago? – for the final day of the Certificate Course. Much has happened in between. The 3 day Certificate Course focused on the South African wine industry and its wines in 7 lectures over 3 days. 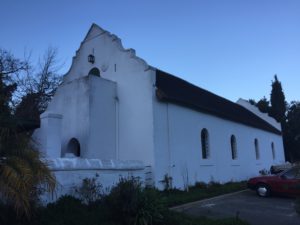 The step up from the introductory, evening South African Wine Course to the Certificate Course was huge. I was soon to learn that the 2 year Diploma Course was to take my learning to another order of magnitude. The course covers wine of the New World and Old World. It comprises of 4 modules and takes 2 years to complete. Each Module has 7 lectures – one can choose whether to complete over 3 days or 7 evenings – together with Theory and Tasting exams. Gosh! This is serious investment in time and money. Module 1 consists of:

As I sat in the classroom and Lizette introduced herself, it was too late for butterflies and a change of heart. There were 20 of us and just 3 students from my Certificate Course. My remaining learner colleagues were from a wide range of backgrounds and experiences: wine enthusiasts; winemakers; restaurant owners and managers; marketing managers and hospitality. We came from or originated in South Africa, England, France and Australia. 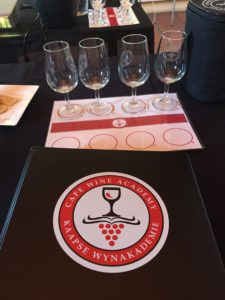 Our first lecture was a reminder of the methodology of how to taste and evaluate wine. Lizette took us further than we had learned on the Certificate Course. The 20-point scoring system remained but we were to pay less attention to colour and appearance. Proper assessment of aromas and flavours, their complexity and palate position, were to be the watchwords for our new tastings. She assumed that we knew and had remembered the basic characteristics of each of the major white and red grape varieties. Our new methodology encouraged us to consider one of 3 broad wine characteristics before narrowing down to the grape cultivar: herbaceous, apple fruity or floral for white wines; and red berry, black fruit or spiced fruit for the red wines. These are the flavour profiles I use in my own tasting so I was familiar with this slightly different approach. I now needed the subtlety of palate – that comes from experience – to pick out the finer nuances for the country of origin. 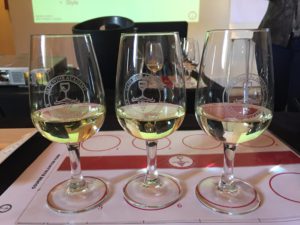 I had a wry smile as Lizette told us that the Diploma tasting exam is easier than the Certificate one. This is because wines were offered singly in the Certificate test. Correctly identifying the grape variety is easier in the Diploma exam as the wines are offered in flights of 2, 3 or 4 glasses. One, at least, should be a ‘banker’ and so allow easier identification of all. So far, so good but we shall be asked to identify the country of origin and/or vintage and/or quality for each wine in each flight. 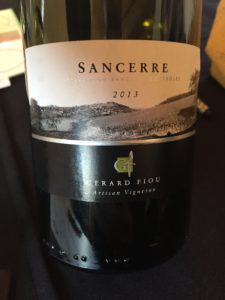 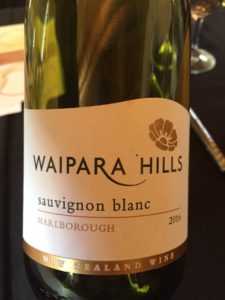 Soon we tasted our first flight: 3 white wines of the same grape cultivar. I was reassured to recognise Sauvignon Blanc. Lizette used terms I had not heard before: ‘linear and piercing’, ‘fruit dominated’ or ‘fruit supported’ and ‘bruised apple’. We are fortunate in South Africa in that wines are named by cultivar. The rest of the World, however, names their wines by region of origin. I learned, for example, that a Sancerre comes from the Eastern Loire Valley in France and is associated with Sauvignon Blanc. The third wine of the flight was from New Zealand and characterised by gooseberry flavours and a pure acidity or, as Lizette recounted the international wine expert Oz Clarke, like ‘jumping naked into a gooseberry bush’! 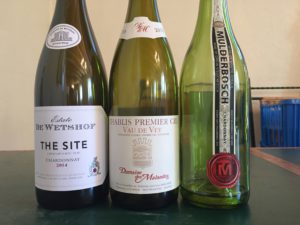 More lecture and then we sampled another 3 wines, all Chardonnay. The first, The Site from De Wetshof, is a top favourite of mine. Next up was a Chablis, from a region in Northern Burgundy in France that I visited and tasted in some 18 months ago. Chardonnays from the region are typically flinty or chalky on the nose and with a ‘hollow’ acidity on the palate and bitter on the finish. Herein lies the complexity and the challenge of the Diploma Course! 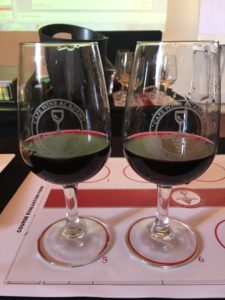 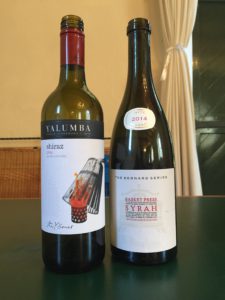 Our final tasting of the lecture consisted of 2 Shiraz. Both were New World wines – one South African (intriguingly called Syrah – a name associated with Old World shiraz) and one from Australia. I picked out Shiraz but though the second wine was from France. Australian Shiraz apparently is slightly sweeter in fruitiness. How much I have to learn! 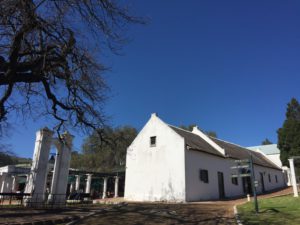 The second lecture, after a break for coffee and fresh air, was about World trends. Lizette presented a mass of data and statistics from the South African and World wine industries. I knew that Italy was the World’s largest wine producer and that China was emerging as a major world player. I knew too that the UK is the largest importer of South African wine. I did not know that much of the wine is exported as bulk wine, a growing international trend. There was much I did not know, for example that New World wine is set to overtake Old World wine in global production at around 2030. I did not know that Russia, together with China, Canada and Australia, are the biggest growth markets. 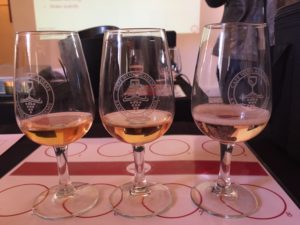 Globalisation, industry consolidation and the growth of brands are major trends. These factors, together with the rise of the ‘flying winemaker’ who heads North or South of the equator for 6 months each of the year, will serve only to make ever harder the task of the wine enthusiast and student to recognise Old World from New World wines. Thank goodness, as Lizette commented, we are not completed the Diploma Course in another 5-10 years time. 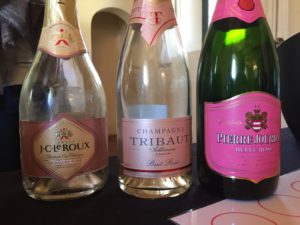 The next tasting came as welcome relief from pie charts, graphs and data. These were sparkling Rosé, each of similar colour but with different flavour profiles. First and last of the 3 wines were from South Africa. I fortuitously picked out the middle one as being Champagne rather than MCC but from the extra moussante feel rather than fruit flavours. The Champagne offered less fruity flavours and aromas, was more austere but with greater complexity on the palate. 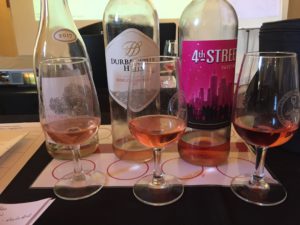 South African Rosés, dry and sweet, followed more facts and figures, this time about the South African industry and trends. By now my head was spinning from both the data and the tastings. It did not help that Lizette gave us little time for to evaluate each wine. Grand Wine Masters do not hang around! She told me she was able to pick out the cultivar/s in a Rosé – something I have wondered about but been able to do before – and that ‘roundness’ of palate differed between the 3 wines. Fortunately, our Diploma tasting exams include single variety white and red wines from the classic grape varieties. 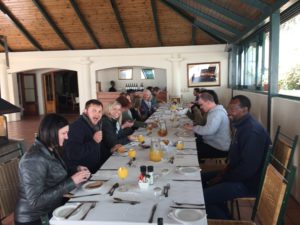 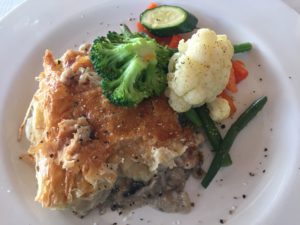 Lunch offered a welcome break and change of scenery as well as the chance to chat with my fellow students. Rich creamy chicken pie was tasty and enjoyable. It was all-too-soon back into the classroom after lunch for the third and final lecture of the day, on Viniculture. We covered much the same ground – pun intended – as we had in the Certificate Course. Lizette romped through macro-, meso- and micro-climate; soils and soil types; irrigation; soil preparation; planting and trellising; the selection of plant variety, rootstock and clone; vineyard routine and harvesting and planting; and pests and diseases. There was nothing especially new in the content beyond the added depth of information. 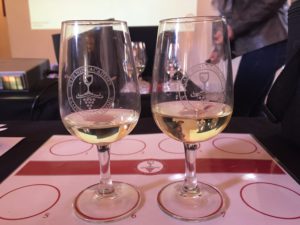 The afternoon tastings focused on the growing trend for organic and biodynamic wines. The first flight consisted of a South African Sauvignon Blanc (organic and Fairtrade) and a French Vouvray (Chenin Blanc) from the Loire Valley. I was pleased to have correctly identified both. The Vouvray was medium straw in colour and so it was good to take taken on Lizette’s earlier advice about paying less attention to colour and appearance than for the Certificate Course. 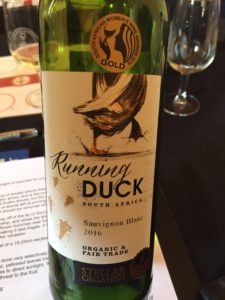 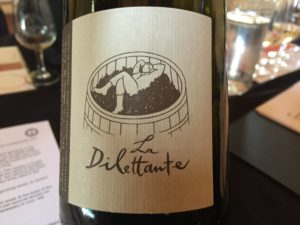 I did not pick out the Merlot and Shiraz in the next flight, both of which were organic South African wines. I overcooked the amount of spice and tannin in the first and so thought it a Shiraz. In contrast, I undercooked the spiciness and lighter mouthfeel of the low- to medium-bodied second wine, thinking it a sour fruited Pinot Noir rather than a Shiraz. How wine can bring you back to earth without warning! 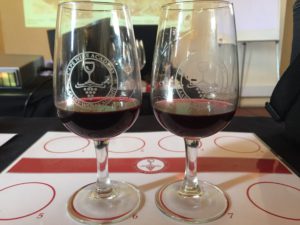 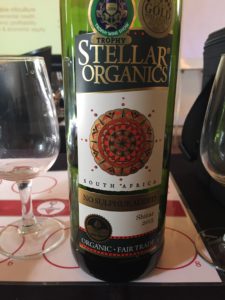 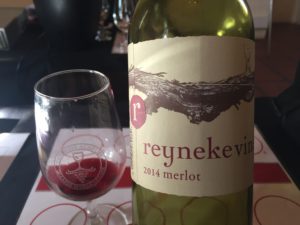 Lizette seemed more interested in tasting wine than describing the intricacies of fungal diseases and insect pests. We ended our tasting with 3 red blends and asked to pick out at least the dominant grape variety. I struggled with this task. The first wine, organic The Ladybird from Laibach wines, was a Bordeaux blend with near similar amounts of Cabernet Sauvignon and Merlot. I made the mistake of changing my mind several times and ended up wrong. The second 2 wines were totally new to me, almost to the point of being ‘horrible’ due to their unfamiliarity. One was a Spanish Caliza, a blend of Syrah and Petit Verdot that had unusual aromas I could not describe being earthy and savoury with less pronounced fruitiness. The second was a heavily oaked Grenache/Shiraz blend from the Barossa Valley in Australia. 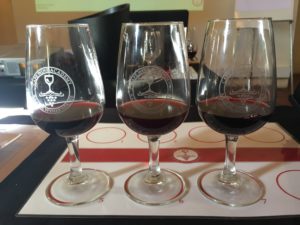 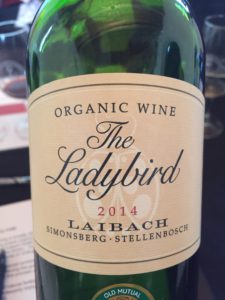 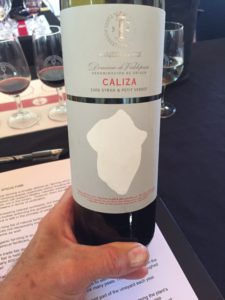 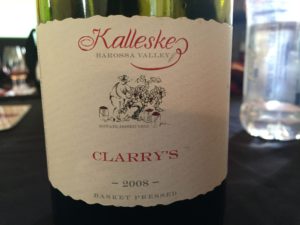 Day 1 of the Diploma Course was tough. The learning curve was steep and time away from the classroom had dulled the learning receptors. Much of the course content was familiar but taken several steps further. I left Morgenhof with the feeling that I had progressed from degree to Masters level. Nearly 90 pages of notes had been covered – all of which need be learned – and Lizette barely turned a page. Self-study, and not only from the course notes, is the new watchword. There are mini written assignments too that need be completed before the next lecture day to keep me on my toes. I know I shall succeed but I know too that it will require focus and hard work. Fortunately, I was out a social event for the evening or I might have been easily tempted into opening another bottle of wine – a familiar South African one and without needing to resort to tasting methodology and analysis! 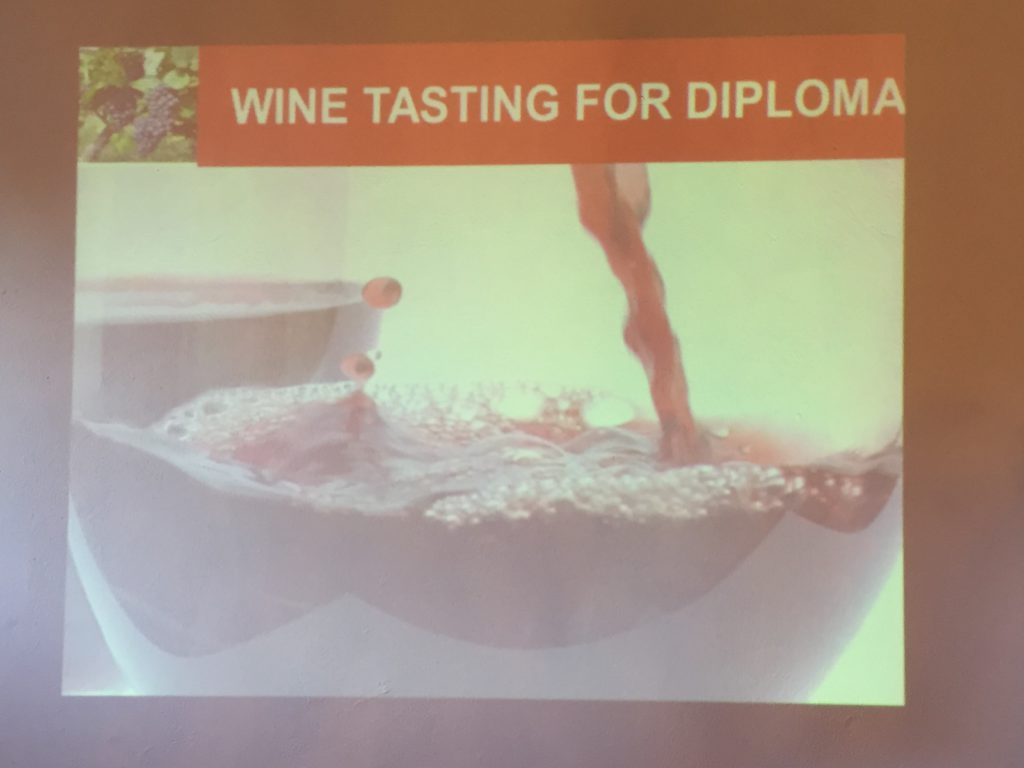