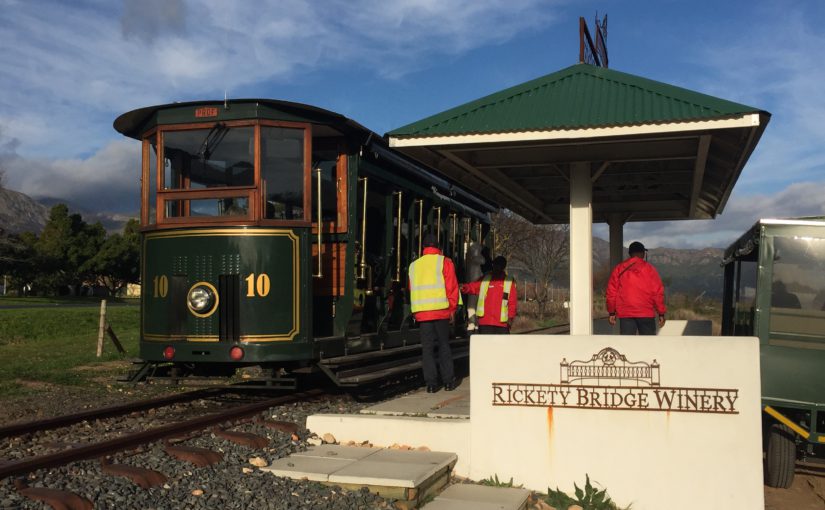 Tasting at Rickety Bridge was a ‘no brainer’ for our trip on the Red Line of the Stellenbosch Wine Tram. We had already visited Maison and Chamonix but these had been by tram-bus. Now we had the chance of travelling on the tram itself since it ran between our last 2 stops: Rickety Bridge and Grande Provence. We alighted close to Franschhoek Cellar. The journey along the former Paarl to Franschhoek branch line was aboard the replica c1890 Brill Tram. Resplendent in varnished wood and dark green paint, with gold lettering and detail, the open-sided carriage offered the best views of the Franschhoek Mountains and their vineyards on the lower slopes.

This was the way to travel for wine-tasting! I was not the only passenger who was enjoying the tasting without driving. My fellow passengers were becoming progressively more raucous during the day since we began at the Tram Office. Many were starting to show definite signs of over-indulgence. One ‘lady’ fell out of the tram as we arrived at the Rickety Bridge platform whilst others staggered with unsure steps. A tractor waited with ‘carriage’ in tow as we transferred for the short road journey to Rickety Bridge.

The wine estate nestles in the valley in an intimate and picturesque setting. The old, railway-sleeper bridge that crossed the Franschhoek River to access the farm in the 1980s has long since gone but the name lives on. Wine-making at Rickety Bridge dates back centuries earlier. In the 17th century, it was originally part of La Provence farm that was granted to the first French Huguenots who settled in Franschhoek and was later owned by widow Paulina de Villiers. It was British owner Duncan Spence who restored the classic 19th century Dutch Manor House and the Basse Provence Guest House – the old rickety bridge too. The Tasting Room, Paulina’s bistro-style Restaurant and modern Cellar have since been built in new accommodation.

It was a short walk to the airy and comfortable Tasting Room that has stunning views across the valley. There were many guests dining as well as tasting. The atmosphere was relaxed amid the late winter sun. We sat down but soon were moved to another table – a far better one – in a private alcove next to the cellar. Jemma was our host. Sensibly for the stop with the tightest time (the theoretical 1 hour stop being significantly reduced by the 2 tractor transfers), Rickety Bridge offered a tram-special tasting of just 4 wines for R40, with the fee waived on bottle purchase.

The estate has varied soils and terroir that range from decomposed granite on mountain slopes to sandy soils on lower stretches besides the Franschhoek River. This allows Rickety Bridge to grow several cultivars on 39 hectares out of the 91 hectare farm. All the noble grape varieties are grown, together with some lesser known and more interesting ones such as Grenache Noir, Grenache Blanc, Marsanne and Roussanne. Red and white/rosé wines are produced in equal amount. Unsurprisingly a broad span of styles is made, from MCC to Noble Late Harvest.

The wines are grouped into 4 ranges: Rickety Bridge, Foundation Stone, Paulina’s Reserve and The Bridge. I selected 2 white and 2 red wines for tasting from across the ranges, less the flagship The Bridge range. The Chenin Blanc from 45 year-old vines was excellent value for R80. It was a pale straw colour with positive aroma complexity of lemon, guava and pineapple. It had good dry acidity too. The wine has had limited maturation in oak (10%) with the remainder spending 9 months on the lees. It made a great start to the tasting.

The Sémillon was from the premium Paulina’s Reserve Range. Paulina was the first female landowner in 1797. Rickety Bridge is one of the few estates to make single variety Sémillon in Franschhoek, made from 25 year-old vines grown on sandy soils by the river. I rated it highly. Deeper in straw colour than the Chenin Blanc, assisted by 12 months in French oak, the complexity on the nose was first class. Aromatic citrus lemon and lime notes mingled freely with those of sweeter honey and nougat. It held onto freshness on the palate that belied its 2014 vintage, offering good acidity and a lingering finish.

I least enjoyed the Pinotage from the lowest, Rickety Bridge Range. The grapes come from the Wellington and Swartland regions. The wine showed characteristic red plum, dark cherry and ripe mulberry notes on the nose but was let down by coarse tannins that overpowered the fruity flavours on the palate. It remains a young wine (2015 vintage) and so I would expect the oakiness from 12 months maturation in 2nd/3rd fill French oak to soften with age.

My favourite, and last, wine of the tasting was the Foundation Stone Red. Made from 5 cultivars with grapes from Franschhoek, Swartland and the Breede River, it was medium ruby and medium bodied in appearance. The unusual mix of cultivars gave an intriguing, forwards, layered complexity of aromatic red to dark fruit, red plum and dark cherry. Fruit, alcohol and silky tannins balanced well on the palate for a distinct finish. I had no hesitation to buy a bottle.

Although time was short – not helped by confusion about when the tractor was due to return to the tram platform – I had time to browse the shop before leaving. Rickety Bridge was the best tasting experience of our day out on the tram, including our last stop at Grande Provence. With hindsight, I would have made a 2 hour stop here for lunch and tasting rather than at Chamonix. The wines offered quality at a decent price and in a stunning location. I wanted to taste much more of the range. I am sure the al fresco and bistro food is excellent too.

In sum, this is a Rickety Bridge is a ‘must stop’ if you enjoy a day out on the Wine Tram. I very much wish to return again; the estate is one of my top 5 to return to. I left wanting more and more sober than many of the other tram drinkers, some being more rickety than others …