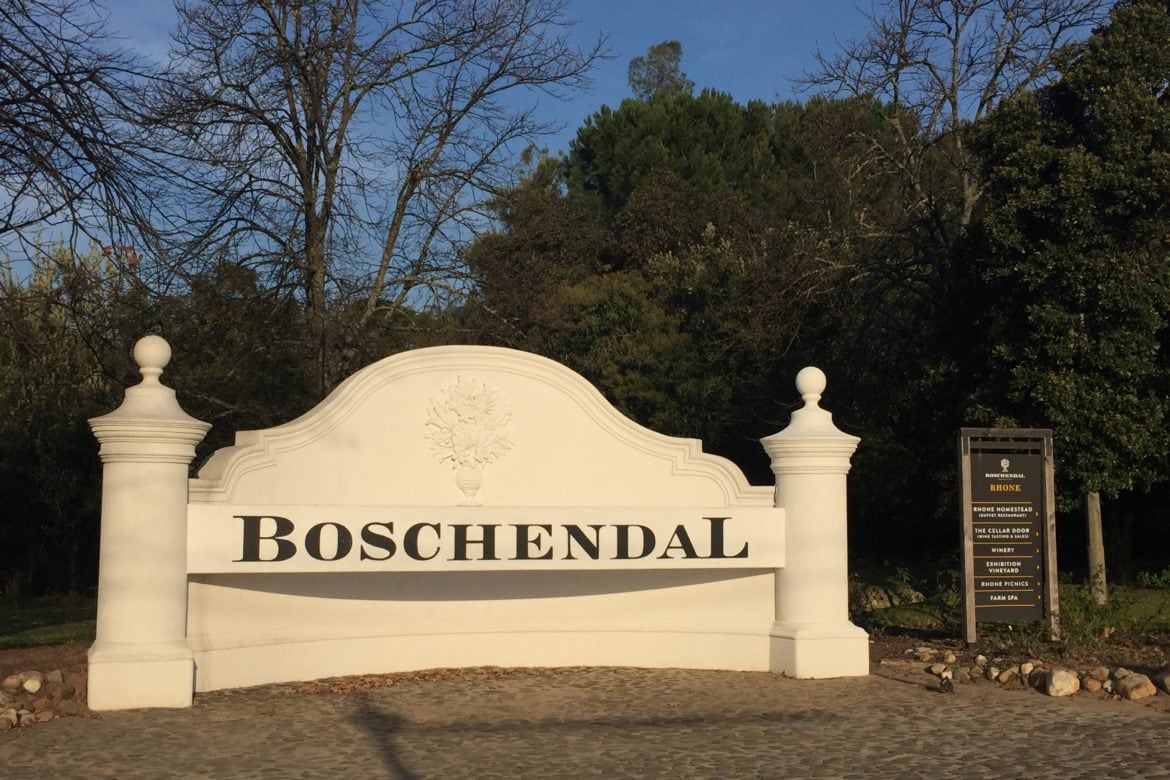 Our intention for the Sunday after the fun trip on the Franschhoek Wine Tram was to visit the Franschhoek Motor Museum. We had booked tickets, as is required in advance. The day would have made a great contrast to wine-tasting. However, we were alerted by SMS late on the Friday that the Museum was to be closed for the weekend on account of some unspecified industrial or worker unrest. We were surprised as we saw no hint of trouble as we passed the Museum on our arrival in Franschhoek. So, instead, we decided to stop on our return to visit the Boschendal estate and to continue our wine-tasting. 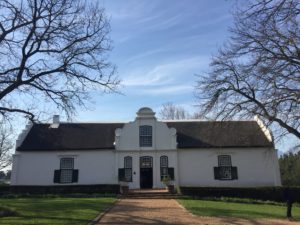 Surprisingly for such a popular and historic wine estate, Boschendal was not easy to find. There were no road signs off the R45 and access was via the R310. Boschendal is Dutch for ‘bush and dale’ and is one of the stereotypical Cape wine estates. It was one of the original farms granted to the fleeing French Huguenots in 1685. The history of rise and decline has parallels with that for many of the original wine farms, for example Lourensford wine estate. The de Villiers family acquired the farm in 1715. A new homestead was built, notably to house Jean de Villiers 22 children, together with outbuildings for 31 slaves. 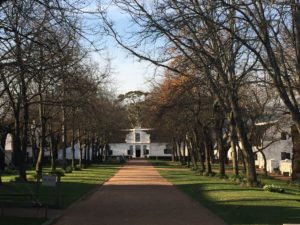 Boschendal became a prosperous wine farm at the time but, like many, suffered the devastation caused by phylloxera in the late 1880s. The property was run as a successful fruit farm in the 1950s and 1960s. The winemaking of today stems from extensive redevelopment by the Anglo American Corporation who took over in 1969. The typically H-shaped Manor House was restored, furnished according to old inventories, declared a National Monument and opened to the public. 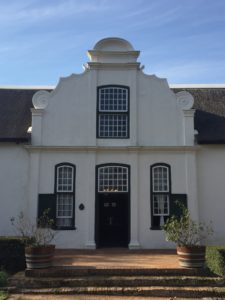 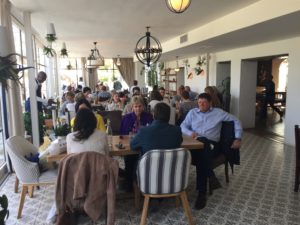 Successive consortia and new owners continued to make improvements to enhance the property in 2003 and 2012. Boschendal today offers multiple attractions. Almost half of the 2240 hectare estate is set aside for conservation. Vines are grown on some 250 hectares, notably Sauvignon Blanc and Shiraz for which the estate is known. 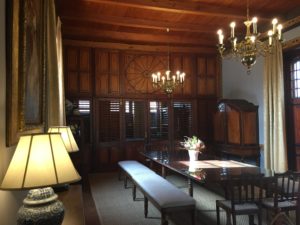 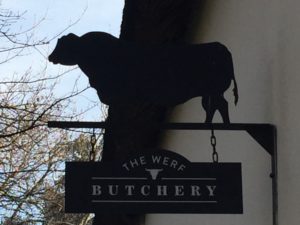 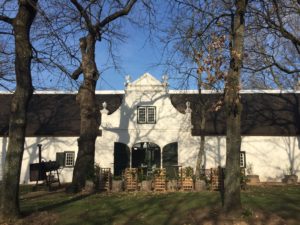 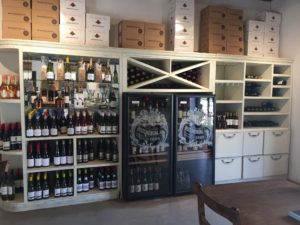 The Cellar Door Wine Tasting Centre is in the oldest building on the estate which was possibly used in the past as a coach house or stables. Our attentive host was Ziggy who guided us through a combination of wines chosen from the Classic Tasting (R45 for 5 wines) and the Premium Tasting (5 wines for R90). Boschendal offers as comprehensive variety of wines, from sparkling to white to red to dessert, as any major estate. These are grouped into the Cap Classique (MCC and sparkling), Cellar Door (sold at Boschendal only), Classic (contemporary premium), 1685 Series (Reserve wines in curvaceous traditional bottle design that commemorate the year of the original title deeds), and Appellation (Limited production super premium) Collections. 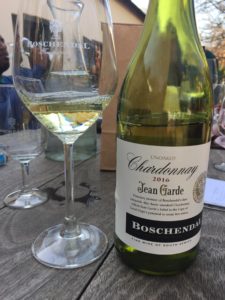 The majority of wines we sampled were from the Classic and 1685 ranges. I was able to taste 14 wines by sharing between the 6 of us in our group. The easy drinking, unoaked Chardonnay, named after 1691 owner Jeane Garde, showed apple, gooseberry and guava notes. It had moderate acidity and a clean mouthfeel. I rated the wooded 1685 Chardonnay slightly higher for its warmer and more aromatic notes and creamier texture on the palate. 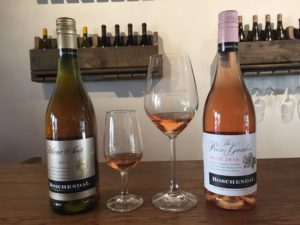 I preferred the Garden Rosé, so called after the historic rose garden, to the Blanc de Noir. The Rosé was a pale salmon rather than pale blush in colour, had a warmer structure, and pleasant dry character with good acidity. 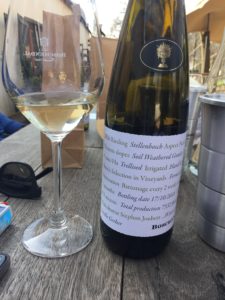 Rachel’s Chenin Blanc was my favourite white wine and excellent value at R60 a bottle. Green apple, lemon, lime and greengage notes followed through well to a dry, clean palate. The higher priced Sommelier Selection Chenin Blanc was more tropical in style, containing citrus lemon and lime, gooseberry and guava flavours. Off dry to dry in style, it was lightweight in the mouth and too watery for my preference. The Riesling, new and experimental to the range hence the ‘Playpen’ name, had similar lack of weight on the palate and was shy on the nose. Nonetheless, it showed typical flavours of apple with some kerosene notes. 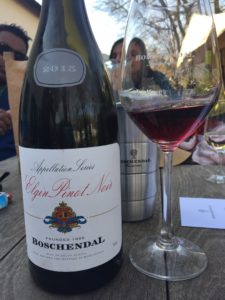 I scored both Pinot Noirs the same and, whilst the grapes came from different regions, they were my favourite wines. They were also the most expensive wines of the tasting and by a factor of at least two. The Playpen wine, from Ceres, was an unusual pale purple in colour but still showed characteristic light to medium body in appearance. This was an easy drinking Pinot Noir with good balance between fruity cranberry and sweet cherry flavours and firm tannins. The Elgin Pinot Noir just shaded its Ceres sibling in my preference. It was a more typical light-medium ruby red in colour with a good complexity of ripe strawberry, red cherry and cranberry notes. It was excellent in the mouth too, crisp with good fresh acidity and a lingering finish. I bought a bottle. 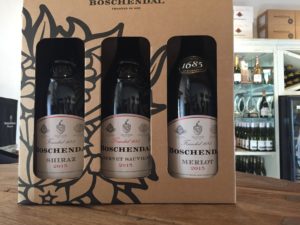 Merlot is not an easy wine to make as it suffers in hot temperatures but the Boschendal Merlot was ripe rather than juicy, a sure sign that the grapes were not over-ripe. It was classic in appearance – medium ruby red and medium to full bodied – that invited more. It was forwards and balanced on the nose with flavours of warm cassis, redcurrant and ripe plum that balanced well the tannins in the mouth. I bought a bottle but shall wait a few years for the tight tannins to soften before drinking. 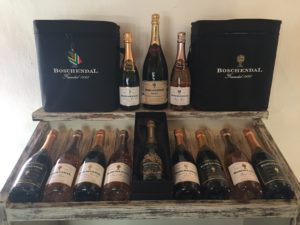 The Pinotage was my least favourite red wine. It too showed aggressive tannins that overpowered shy dark plum, redcurrant and cranberry flavours. The S&M, the sole red blend, was more balanced and offered good complexity of dark fruit spicy notes with warmer berry flavours. The tannins were smoother too from an extra year of maturation. 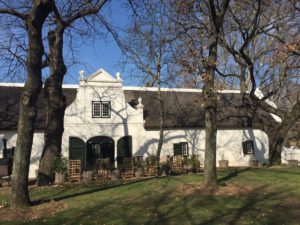 We ended the tasting with Cabernet Sauvignon, new to the estate, and Shiraz. Like the Pinotage, the Cabernet Sauvignon suffered from green tannins but the wine did have a positive follow through of red to dark plum and blackberry aromas to the palate. In contrast, the Shiraz was a good wine to finish. It was refined for its youth and classic in style. I liked the medium ruby to pale purple colour; mulberry, red plum, blackberry and white/black peppercorn fruity, spicy aromas; balance and smooth tannins on the palate. 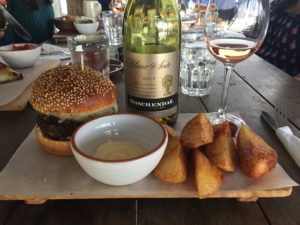 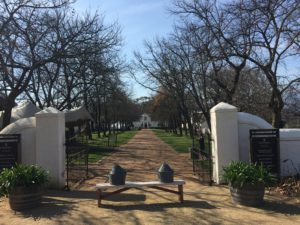 By now we were hungry after our sociable wine tasting and so headed to the deli. It was not as busy as when we arrived – I advise booking for the Deli and Restaurant if heading to Boschendal on a Sunday – and we were able to find a table outside. We each ordered a tasty burger and chips, together with a bottle of Blanc de Noir (not my favourite wine but affordable) to accompany. It was a great way to end our visit, as well as our Franschhoek weekend, as we headed off in separate cars in different directions after. 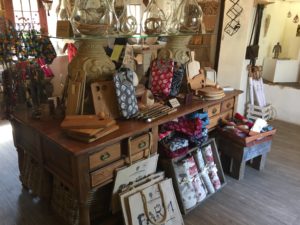 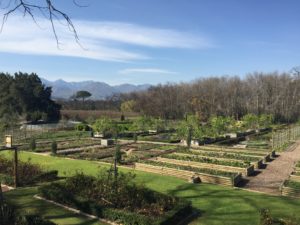 Boschendal was a great choice for a group of friends to meet for wine tasting, and to sample the famous pink wines. The range of wines available for tasting is large, much bigger than many a wine farm, and there is space. It was busy enough for a late July Sunday and I can only imagine how stretched it must get during the holiday and festive season. As it was, many of the wines were served warmer and not chilled to the right temperature which was likely due to bottle turnover at a peak time. We spent a relaxing afternoon sampling the wines and hence missed many of the historic buildings and big attractions. Plan to spend a whole day at Boschendal, book ahead, and take the time to explore. That’s for sure what I shall do next time, glass of blush Rosé or Blanc de Blancs in hand … 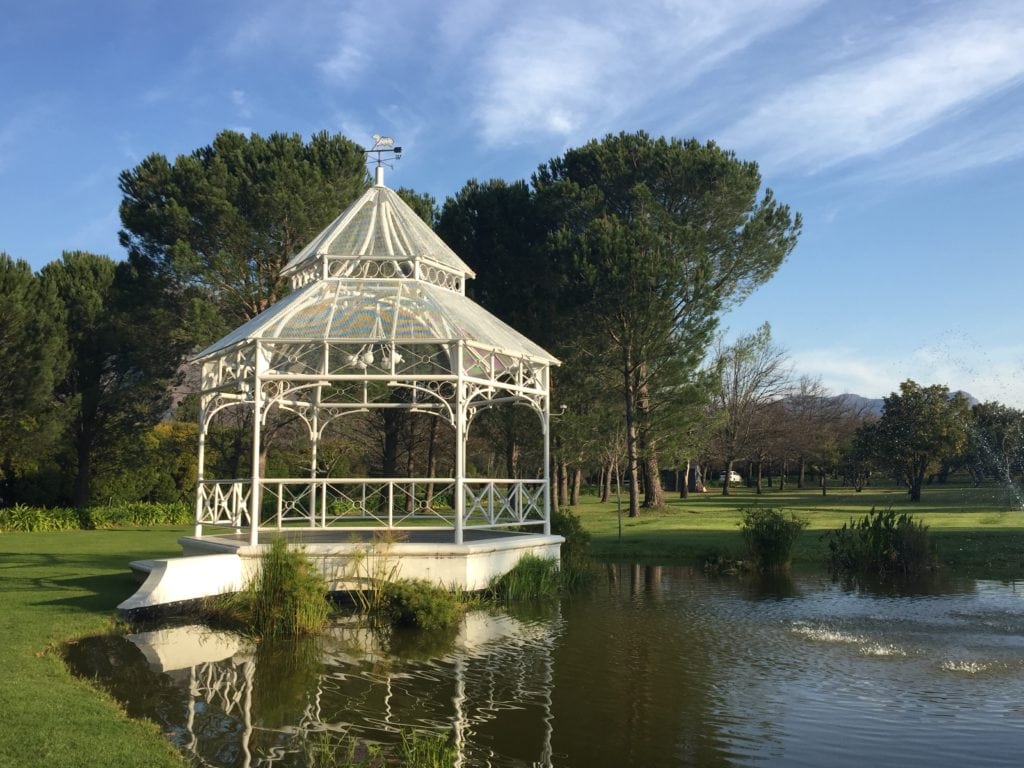