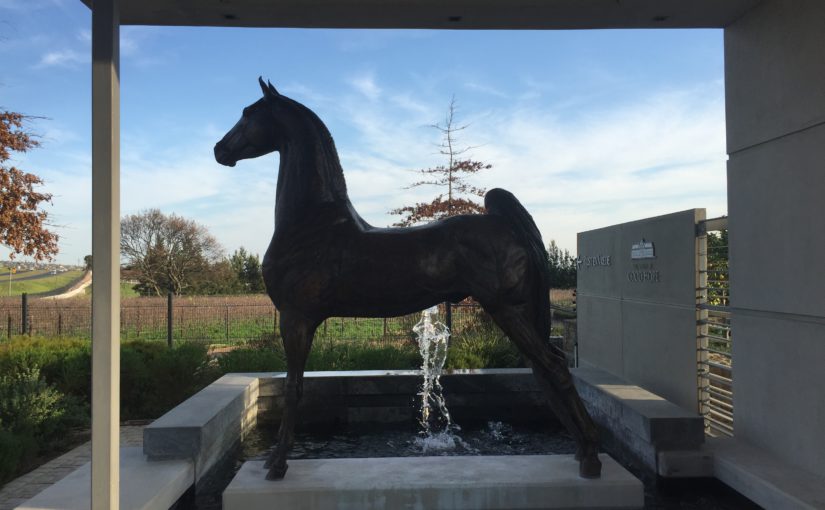 Are you familiar with the phrase ‘Leave the best until last’? I didn’t plan it this way but this is how my day panned out. It began with disappointment. Waterkloof was closed for tasting and, surprisingly, with no alternative arrangement. I headed instead for the iconic estates of Vergelegen and Lourensford, then North to scenic Yonder Hill and busy Eikendal. I reckoned I had time for one last tasting. The Platter’s Wine Guide advised tasting at Cavalli was open to 7 pm and so I headed for the estate. It was only when I arrived that I learned that tasting ended at 6 pm (winter hours). More on that later.

Cavalli impressed from the start. This was a statement wine estate. A bronze horse statute, life-sized, stood beside a gushing fountain at the entrance gate that was shared with the Winery of Good Hope and Rust en Vrede wine farms. Bold, gold modern lettering gave foretaste to the art gallery. Cavalli was not only a wine estate but a stud and equestrian centre too.

The paved road through vineyards to the Restaurant and Tasting Room passed the Stud Farm and Training Facility. At first sight, I thought the impressive stable building was the cellar itself! Indeed, the facility is as functional and modern as any high-end wine cellar. I did not look inside the indoor arena and 20 state-of-the-art stables but would have welcomed a tour. The space has been architecturally designed for harmony of the equine residents. The horses are conditioned to respect the distinction between ‘training time’ and ‘relaxing time’ with their stable for private time to rest and feed. No expense has been left out to provide the best possible facility: maximum use of natural light and ventilation; interaction between horses to recognise their sociable natures; automatic watering and feeding systems; dual stable doors to allow access to outdoors and inner ‘run out’ pens; special rubber flooring that is dustless, warm and safe; separate ‘ready room’ for tacking up; and dedicated vet area. It was clear that even if the wines were given half as much attention that Cavalli wines were going to be special.

I parked beside the contemporary Restaurant and Tasting building. Elongated and elegant, it was built just 3 years ago. If I remember correctly, the architect was the Smith family owner’s daughter. The impressive entrance, flanked by gabions filled with natural stone, led to the Restaurant upstairs and the Tasting Room below. Tasting is in the basement cellar. Uniquely in my experience (the small, vaulted cave set into the hillside at Hout Bay possibly excepted), there were no windows. This, despite magnificent views of the Helderberg Mountains to the East. I sensed an arrogance – justifiably so – that forced a concentration on the wines. Cavalli was going to do things in its own way and let no tradition or convention decide otherwise! 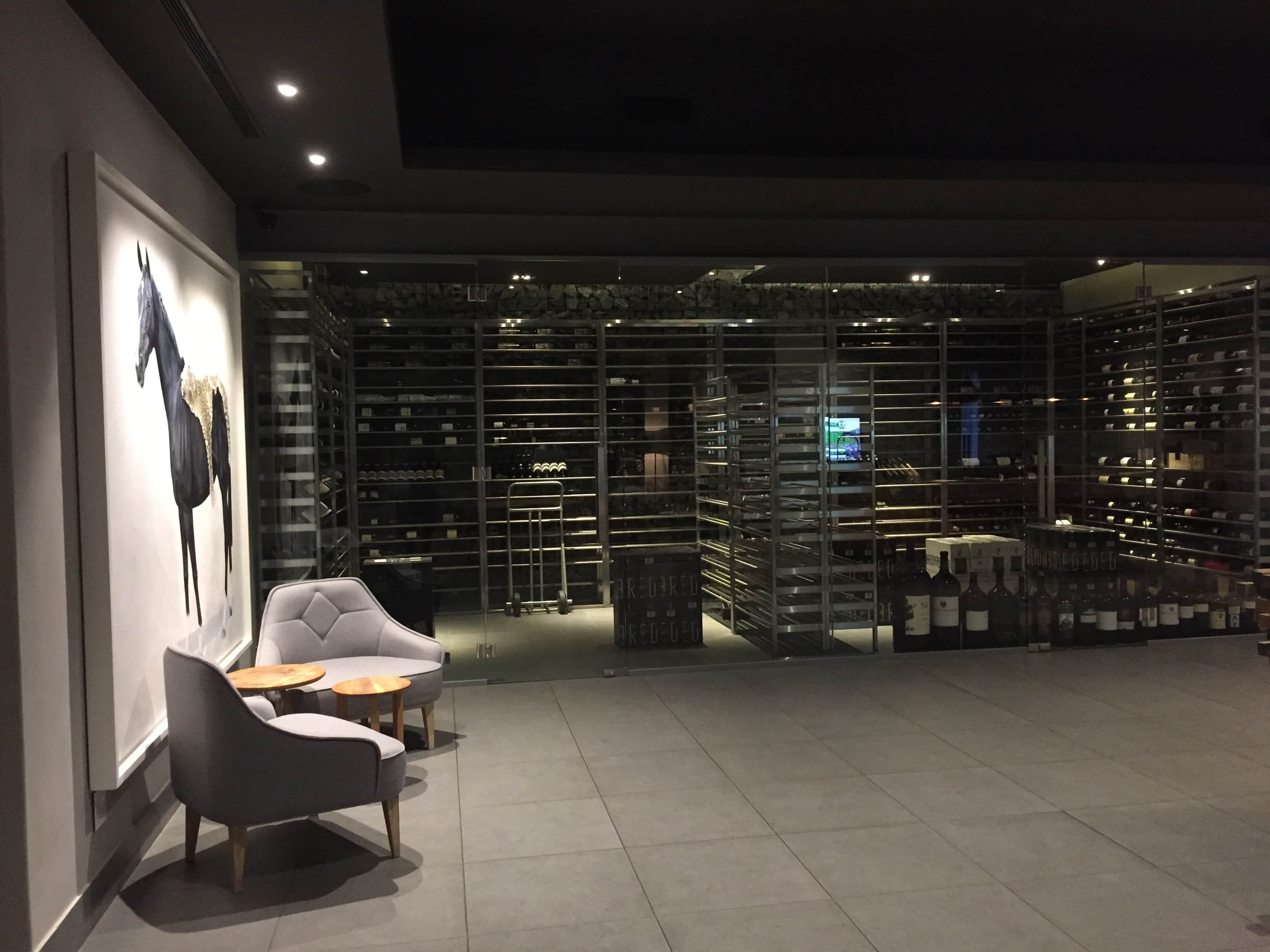 That said, the Tasting Room was hugely grand and impressive. Huge too. I felt I was sat in a millionaire’s private lair. Superb modern art adorned the bland concrete walls. Wood, leather and fabrics made up designer furniture and furnishings of the highest quality. A large television sat above the modern fireplace. On one side there was a whisky gallery displaying (I think) over 400 different whiskies. I learned from my tasting hosts, James and John, that the whiskies will never be drunk and that the room is near hermetically sealed for constant temperature and humidity. Formula 1 and Moto GP memorabilia – a Michael Schumacher helmet and Lewis Hamilton shoes – sat on a lit shelf at one end. There were signed guitars from Duran Duran, U2 and the Rolling Stones. This surely was no public Tasting Room? For it felt like a Playboy’s play room. 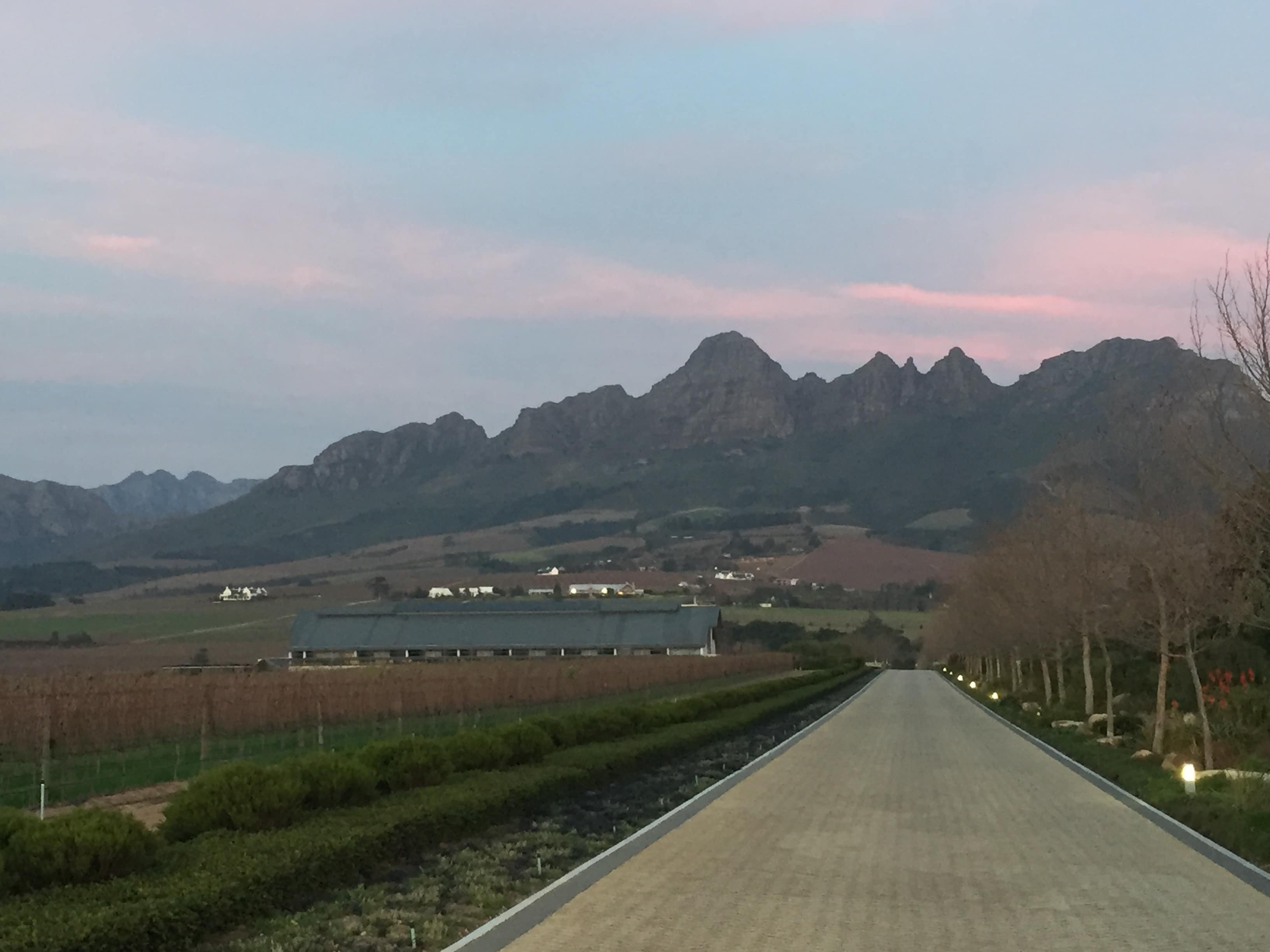 I learned too that the vineyards were established in 2008. The young vines are grown in 28 hectares of the 110 hectare property. The big name cultivars are all gfown together with the Portuguese white grape called Verdelho that is rarely grown in South Africa. Red and white/rosé wines are made in similar amount. Grapes are brought in from neighbouring Rust-en-Vrede and Ken Forrester vineyards to supplement those grown on the farm as it becomes increasingly established. A further 10 hectares is set aside for indigenous gardens together with the same area for manicured paddock for the stud horses. 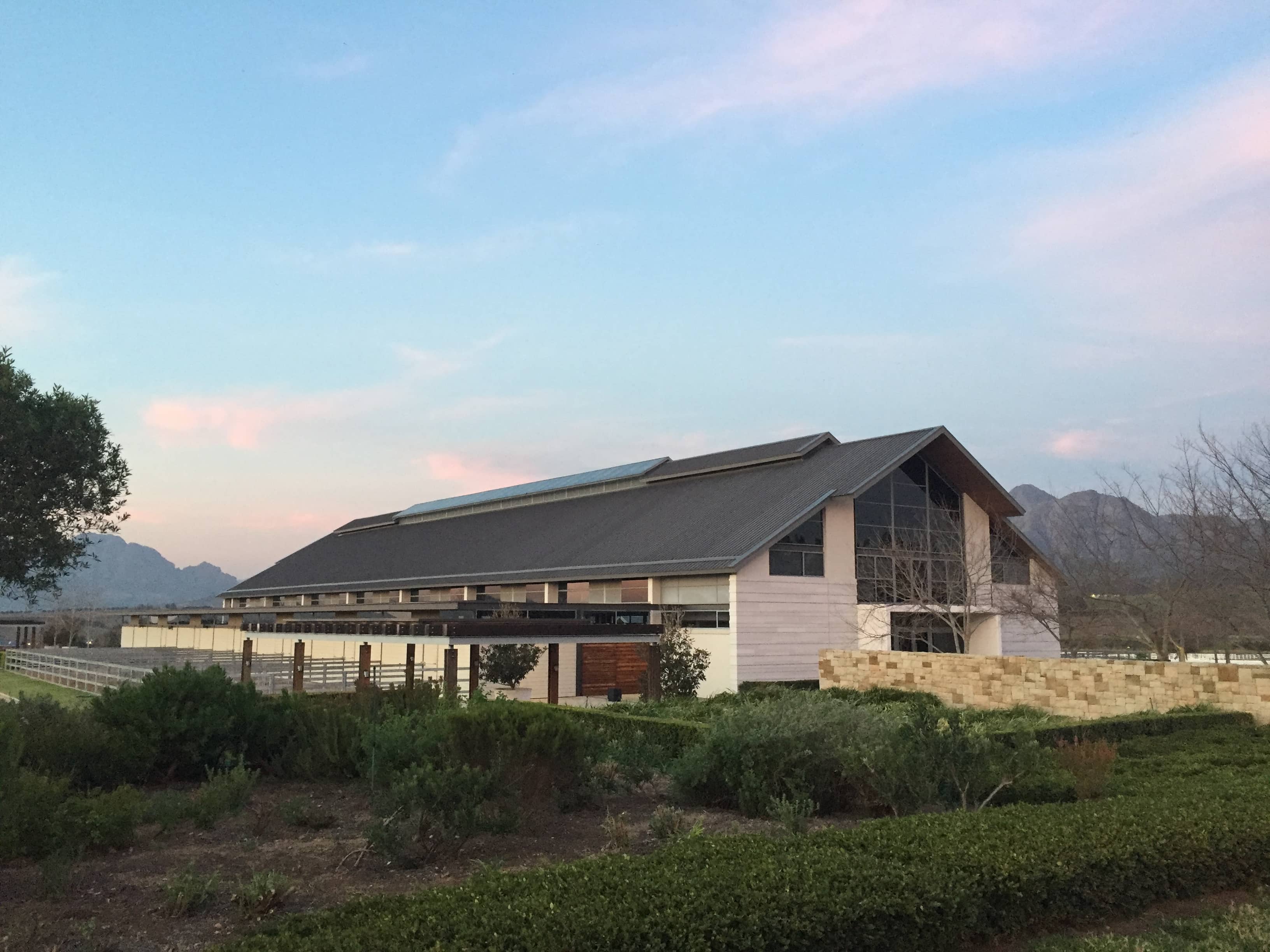 It being late in the afternoon, I was fortunate to have had the near sole attention of James (Brand Manager) for my tasting (R50 for 8 wines, waived on purchases over R200). He was generous of his time, John later too, as my tasting finished long after the published closing time. James led me through the wines in special order and beginning with 3 from the Passions Range. The equine pedigree extended to the wine names and award-winning labels with names of White Knight, Pink Pony and Black Beauty. 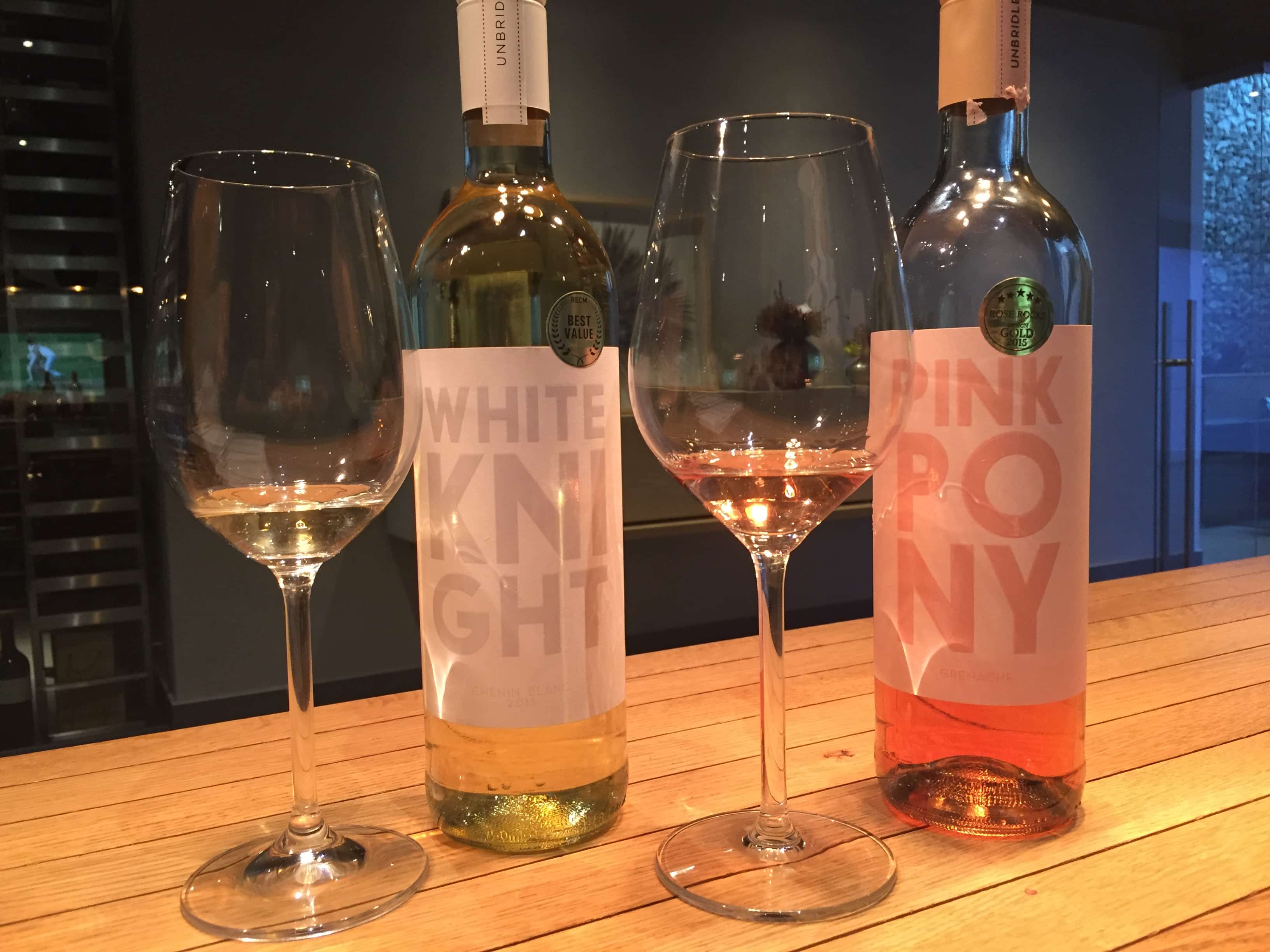 I scored the White Knight, made from Ken Forrester grapes, higher than the Pink Pony Rosé. Both were drinkable and aimed at the ‘easy drinking’ market. The unoaked Chenin Blanc, fermented in stainless steel tanks, was lively for its 2014 vintage. It showed classic fragrant aromas of lemon, apple, pear and honey with good complexity. It was good on the palate too with good acidity and finish with a crisp mouth feel. The Grenache Rosé was potent and demanding with bold strawberry and red cherry notes, unexpectedly so for an ‘easy drinking’ wine. It showed a pungent volatile acidity slightly reminiscent of the turpentine aroma in Riesling that I did not like. I much preferred the soon-to-be-discontinued Premium range Vendetta, a Viognier-led blend with Verdelho. An unusual blend, the aromas showed a multi-layered complexity of orange and green apple with tropical fruit salad and apricot. The wine was dry to off-dry in character, with moderate acidity and a creamy texture. 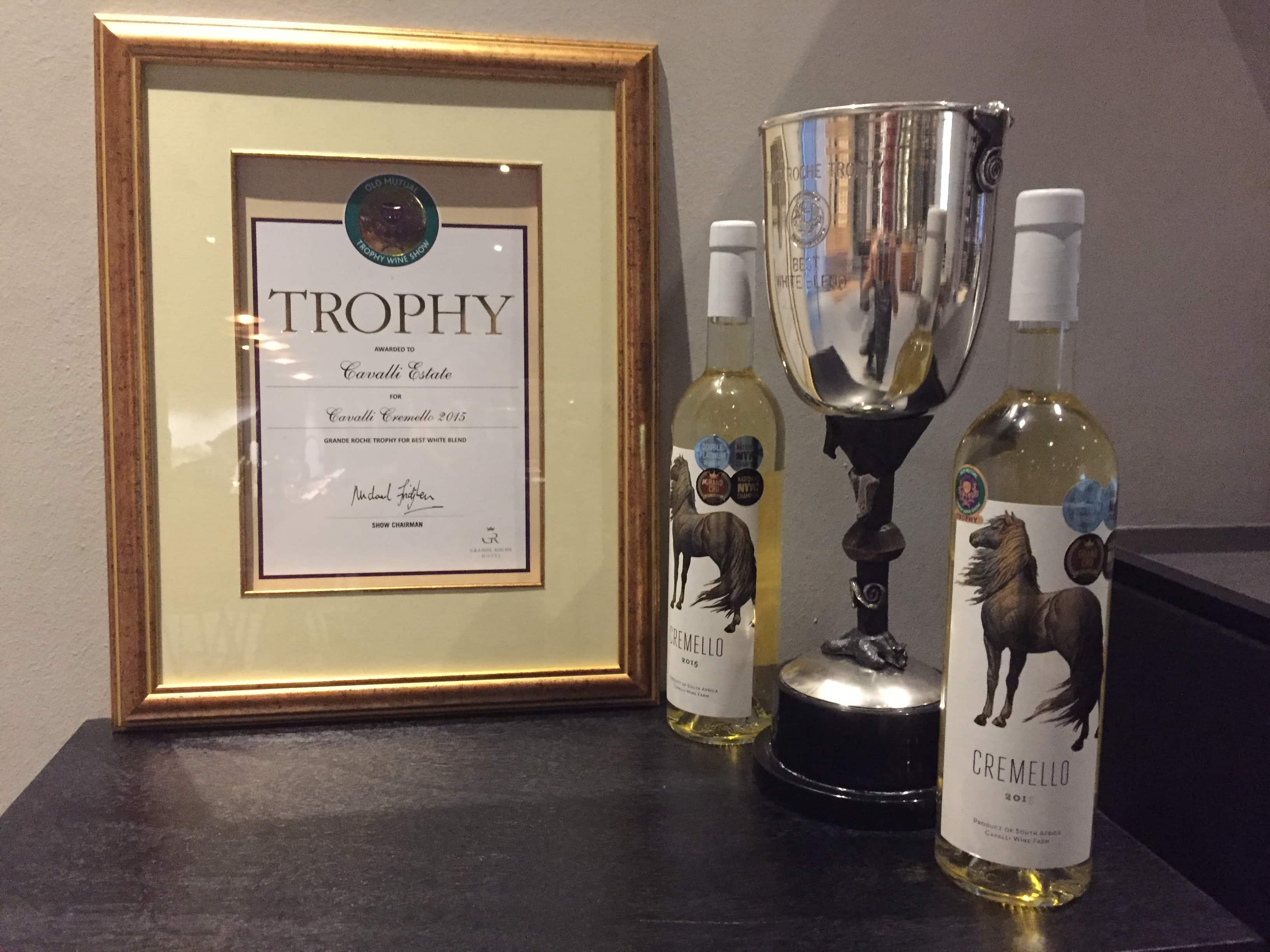 Another unusual blend was the Cremello. I had tasted it before at the Old Mutual Trophy Wine Show where it won the Trophy for the Best White Blend. Not only that but it was the lowest priced Trophy winner ever. The wine is made from Chenin Blanc, Chardonnay and Verdelho in broadly similar amounts. Each varietal is fermented differently before blending. They combine and balance well for a multi-faceted warm, fruity nose of apple, peach and nectarine with floral undertones. Its class was shown on the palate with a rounded and well pronounced finish. I liked it at the Show and it was my favourite wine of the tasting. I bought a bottle.

James told me that Craig Barnard, the ‘new’ winemaker in the saddle since 2014, had come from De Morgenzon. Suddenly, a sequence of thoughts fell into place. De Morgenzon is one of my favourite estates and their wines consistently win top awards. The style was evident in the wines I had tasted, with interesting blends to push new boundaries. The wine labels with their modern yet classic litho-style prints of horses were reminiscent of those of De Morgenzon. I predict that Cavalli wines will have a successful and exciting future. 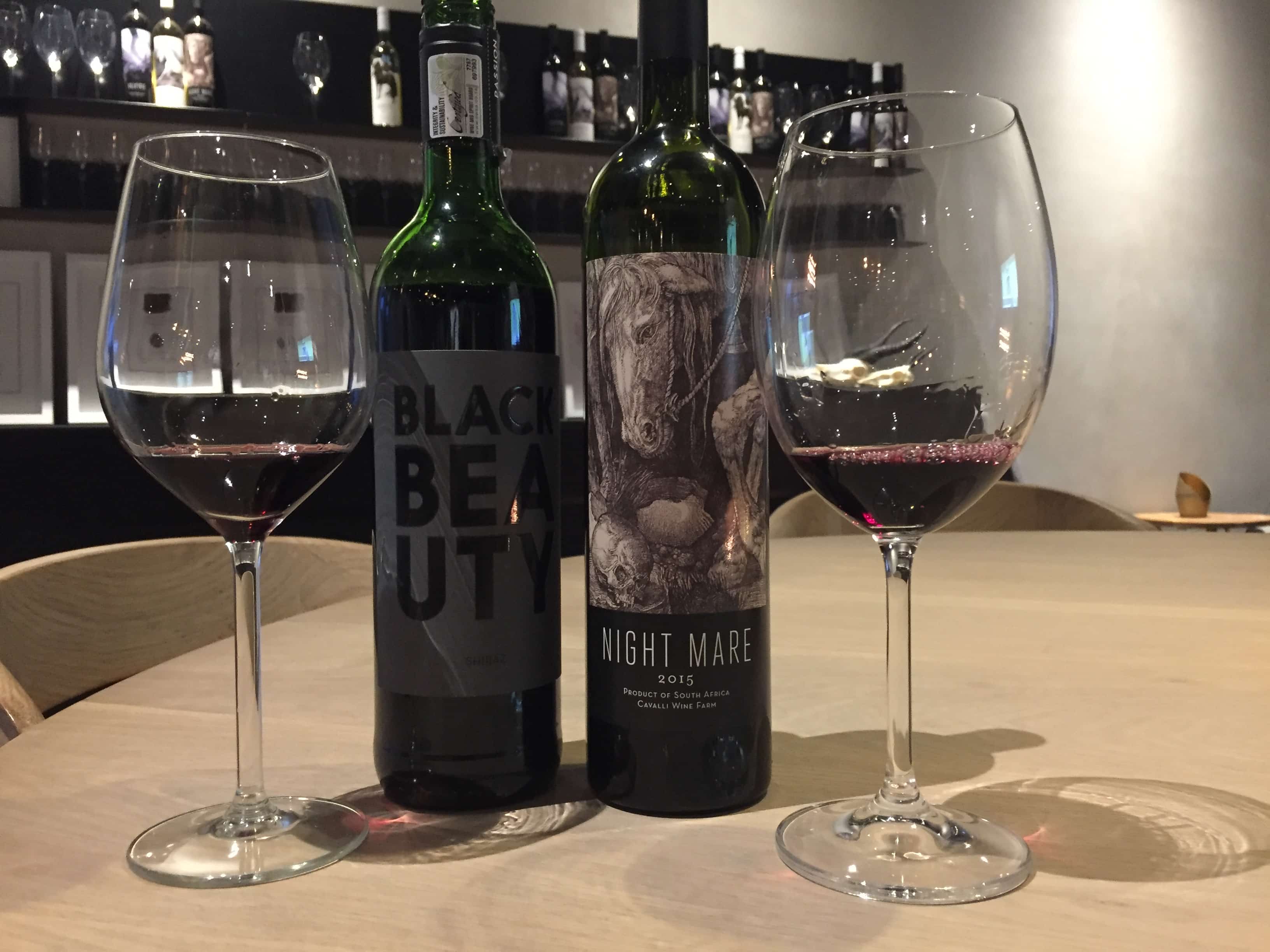 The final wine of the Passions Range was the Black Beauty Shiraz. This was another wine with forward notes, of dark berry fruit and spicy peppercorn. Fully wooded for 14 months in 4th fill French oak, the youthful tannins were tight and grippy. The Premium Night Mare, a Shiraz-led Rhone-style blend with Grenache, was similar in character but more rounded than the Black Beauty. The tannins were more pronounced but they did not overpower the red plum, red cherry and mulberry flavours. 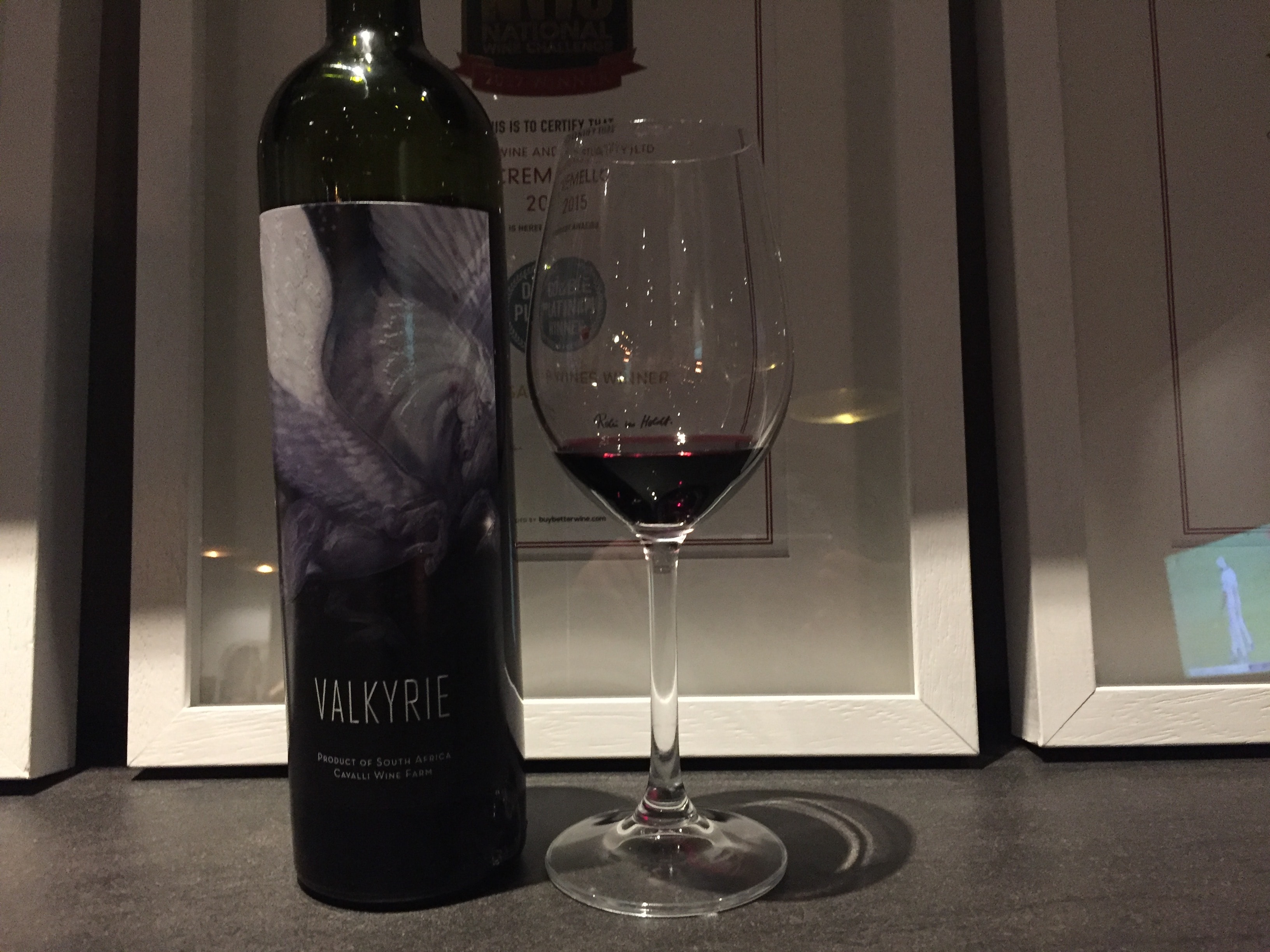 Another blend was the Valkyrie made from Malbec and Petit Verdot. More commonly used as minority cultivars in Bordeaux blends, it was unusual and intriguing to see them in equal measure. The wine was full-bodied and a deep ruby in appearance and with bold, juicy dark berry and plum aromas and a hint of earthy smokiness. Fruity entry led to an oaky exit with tannins that need age to soften. This wine begged for food to drink with it. 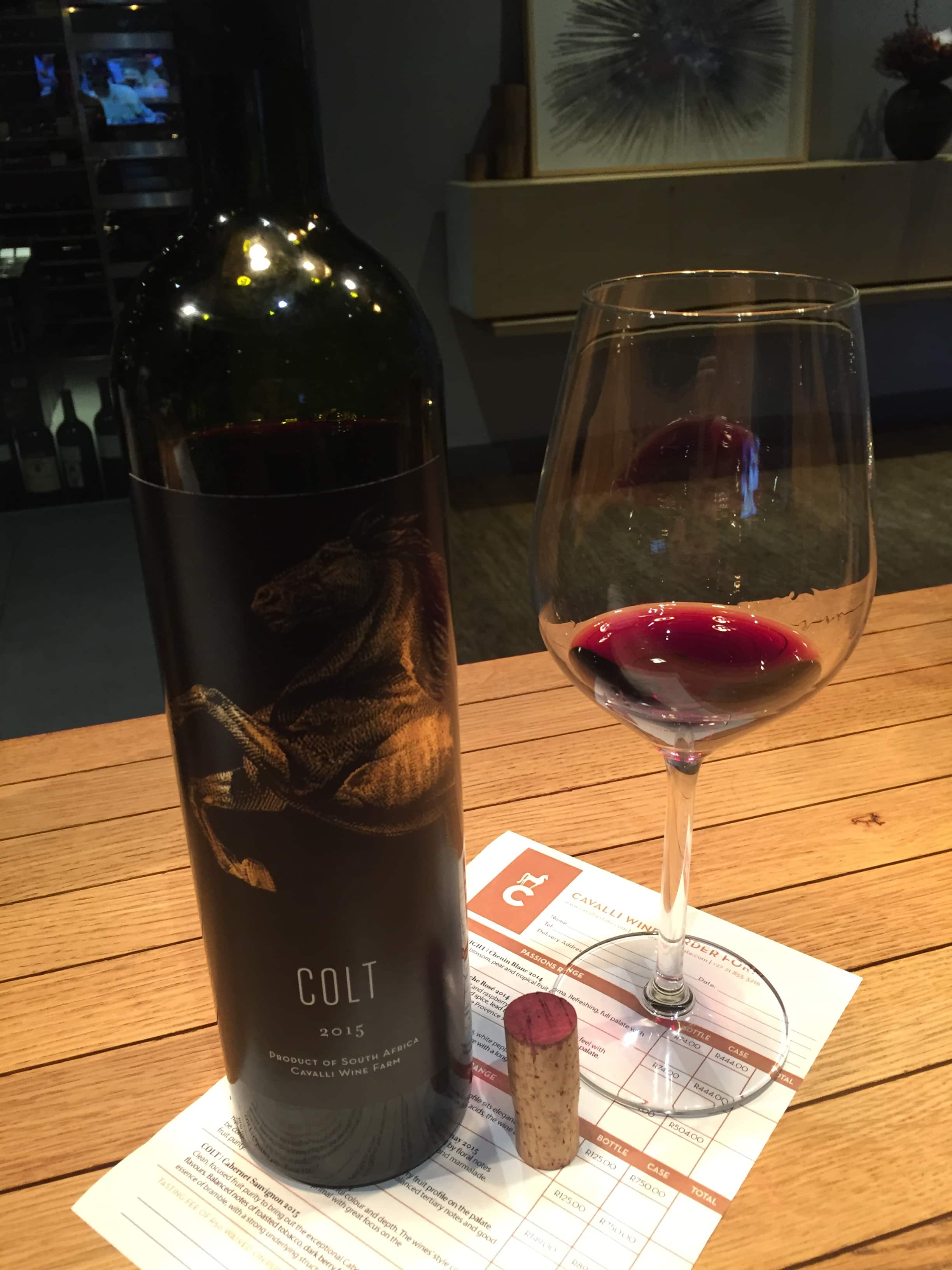 I ended with the Colt, the most expensive wine, which was made solely from Cabernet Sauvignon. Red cranberry, cherry, plum and loganberry notes filled the glass in medium ruby colour. The balance in the mouth was too strong towards dry tannin for my preference.

Wow Cavalli! Even though I overstayed my welcome to beyond closing time, I could have stayed longer. I did not have the time to view the Restaurant, Boutique, gardens or paddock. I did briefly look in to the art gallery and collection of sporting memorabilia as I left the building. This is a signature estate that is proud and loud – with class and style rather than any brashness. Quality is an obvious hallmark and the wines just got better. Many were unusual blends that gave great complexity and interest. The wines were as bold as building itself and made with similar style. 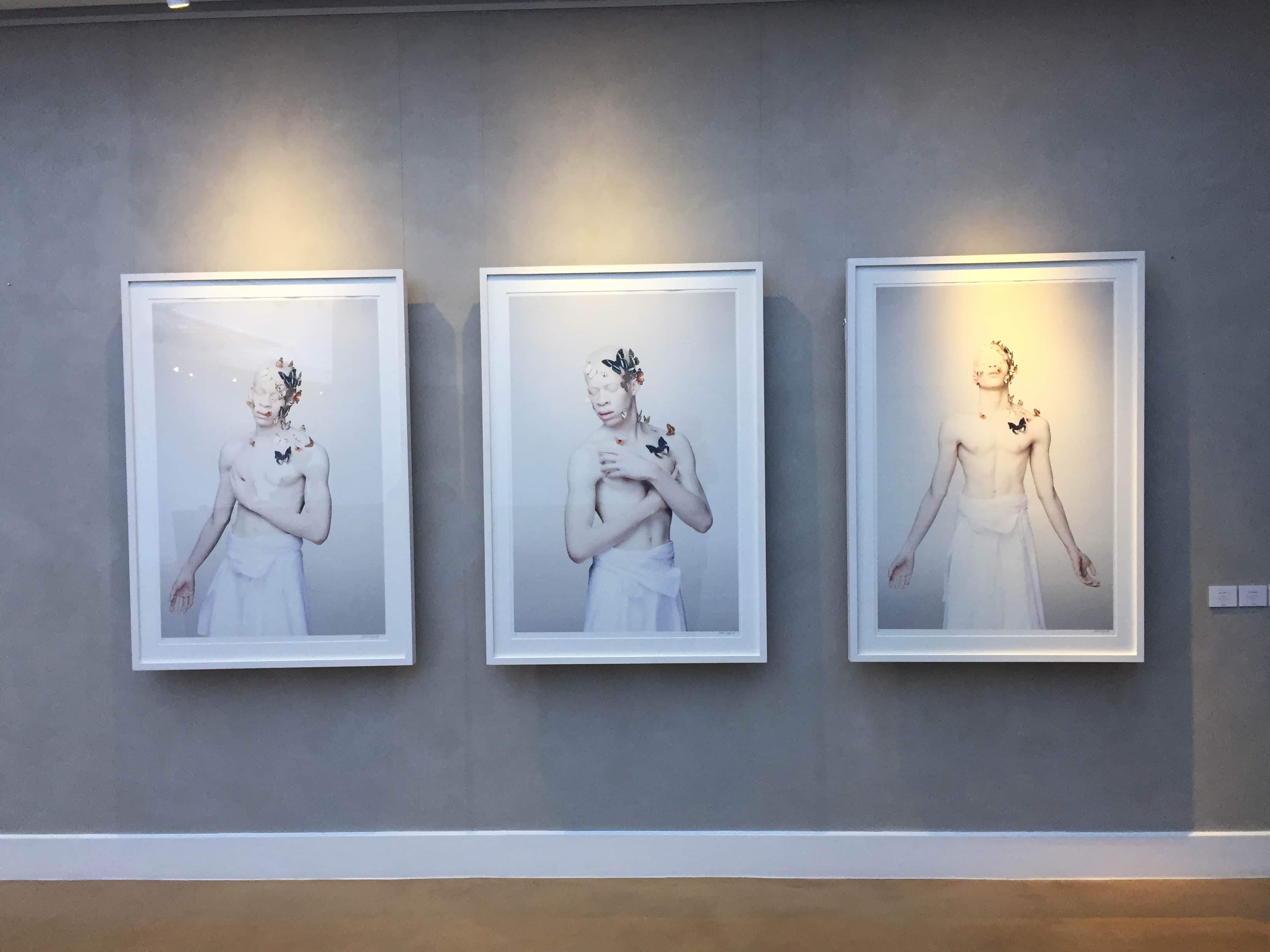 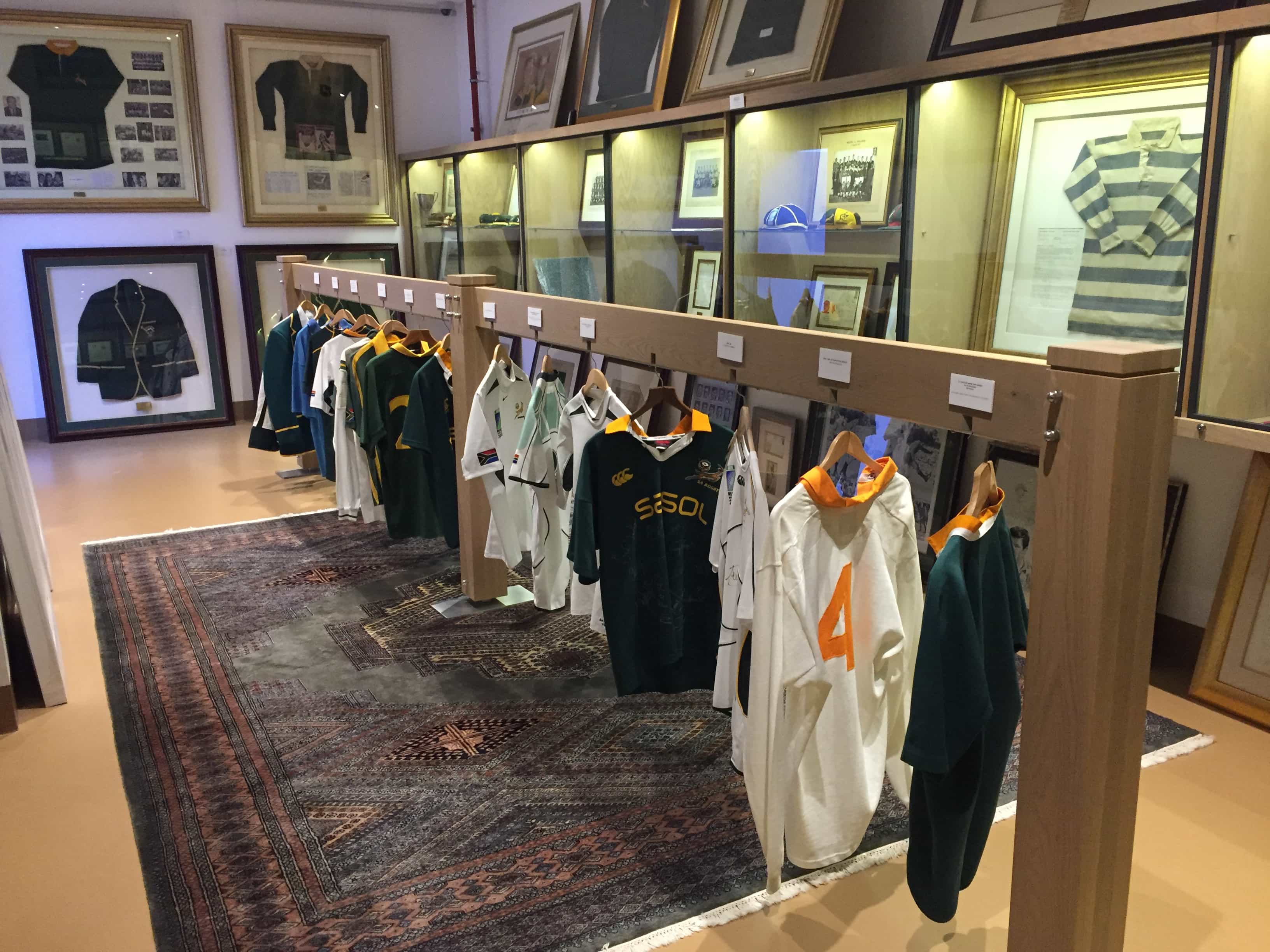 Cavalli has also managed to ride 2 horses at once: wine and equine. This is no easy task as I discovered at Avontuur where the horses have greater success than the wine. Many other vineyards, as diversify to embrace ‘vinotourism’, have I consider let their wines suffer. Cavalli has not done that and I look forwards to an early return visit (Note: I returned for tasting and lunch in the Restaurant on 9 August – read more here).