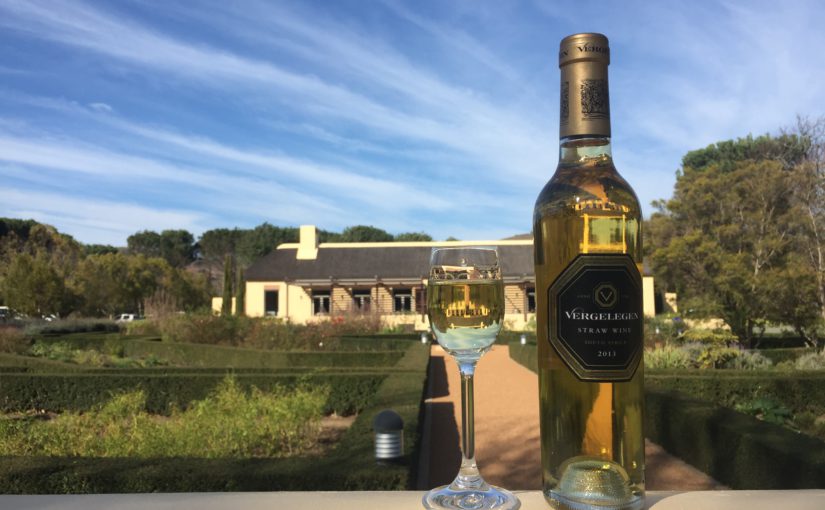 Today was Helderberg day, or so it started. I had wanted to visit the Waterskloof Wine Estate ever since tasting their wines at the Vineyard Hotel in Cape Town. I didn’t check beforehand but found it closed for refurbishment. Surprisingly, for an estate of such stature and reputation, there were no alternative tasting arrangements. Consequently, I headed off to Vergelegen Estate, where I had planned to go after.

I knew where Vergelegen was having recently been nearby to Morgenster for tasting and launch of their new wines and olive press. I arrived at the entrance to see signs saying that there was a R10 entry fee. Now that is a first for wine-tasting! My surprise must have been obvious to the security guard at the gate. I told him I had never paid before and that I was a wine writer and journalist. He waived the fee and I entered with a smile.

Vergelegen means ‘situated far away’ as it used to take 3 days by ox-wagon from Cape Town. Today, it is barely an hour away. The name was chosen when the land was given to Willem Adriaan van der Stel in 1700. The estate has a long and rich history. Many distinguished persons have visited – the late Nelson Mandela, Queen Elizabeth II, President Bill Clinton and Prince Charles to name but a few. Vergelegen is much more than a place for wine tasting, although that was my reason for visiting. There are 17 gardens in the historical core of 60 hectares as well as 3 restaurants, together with historic exhibitions in the Homestead. There’s also a Library of ancient and modern books located in the original winery that was built in 1816. Like La Motte Estate, Groot Constantia Estate and Solms-Delta Wines, one needs the best part of a day for the full cultural experience.

The original land claimed by Willem Adriaan van der Stel extended to 30,000 hectares. Six years after he started to plant vines, he had half a million vine stocks. These included ancient cultivars I have barely heard of: ‘Blue Muscadel’, ‘Steendruif’ (Chenin Blanc), White Muscadel and Frontignan. Orange and fruit orchards, camphor and oak trees were also planted. The beautiful Cape Dutch homestead and associated buildings were built. An extensive farm was established with 1,000 cattle and 1,800 sheep. Willem Adriaan’s extravagance got the better of him. He was found guilty of corruption and returned to Holland in 1706. Three years later, the property was sold and divided into 4 separate farms: Vergelegen, Lourensford, Morgenster and Cloetenburg.

The farm had successive owners until Sir Lionel Phillips, a Kimberley diamond magnate, bought the property for his wife Lady Florence Phillips. The estate was restored and upgraded. Vines were removed in favour of mixed agriculture and the gardens were laid out with the help of Hanson, who Lady Phillips brought from England. Vergelegen and its contents were later sold by auction to the Barlow family in 1941 following the death of Sir Lionel and Lady Phillips. Farming operations resumed and vines were replanted on a small scale.

The foundation of the wines made today stems from purchase of the estate by Anglo-American in 1987. The Homestead was restored and a modern cellar built. Alien vegetation was cleared and land restored. The soil was fully mapped and extensive investment was made into planting vineyards. Today, 158 hectares of the 3,000 hectare farm are under vine. Vergelegen is renowned for its cabernet wines and so it comes as no surprise that red wines predominate slightly compared with white (58% to 42%). A broad variety of cultivars are grown, mapped to the most suitable soil, including Sauvignon Blanc, Sémillon, Chardonnay, Cabernet Sauvignon, Cabernet Franc, Merlot, Malbec and Shiraz. The soils have high clay content and so retain winter rain for the critical early summer ripening period.

The Tasting Room was close to the car park and easy to find. As with so much at Vergelegen, it was a mix of ancient and modern: traditional thatched Cape Dutch on the outside and modern, interior designer decorated and colour-coordinated on the inside. The shop could easily have been in a 5-star hotel foyer. Four options from the multi-award winning wine range were available for tasting, each consisting of 4 wines: Premium Range (R30), Reserve Range (R40), Flagship Range (R50) and a Mixed Range (R45). I chose the Reserve and the Mixed ranges.

The Sémillon offered good complexity on the nose and palate, with layered warm fruity, apricot and citrus over honeyed, wooded flavours from 8 months maturation in new oak barrels. The wooded Chardonnay was a pale straw colour too, paler than most despite being a ‘heavy’ wine, and also showed good complexity, follow through and a firm finish. I preferred it to the Sémillon due to its fresh, dry mouthfeel.

The Reserve Merlot and Shiraz were medium bodied, with the Shiraz showing classic purple tinge to the medium ruby red colour. The Merlot (containing 14% Cabernet Sauvignon) was disappointingly light on red cherry and plum fruit flavours at the expense of masculine, smoky tannins that dominated the palate. The Shiraz showed good balance between spice and fruit on the nose – light green peppercorn with mulberry, raspberry and blackberry – and with a grippy tannin that held on to the finish.

I chose the Mixed Range to follow as I wanted to taste the Straw Wine. The selection contained one white wine only, an unwooded Sauvignon Blanc. The wine was made from 14 separate blocks, of old and young vines, and with varying microclimates. The different grape origins showed in a vibrant, forward wine with fresh notes of herbaceous gooseberry, melon, and lemon. I liked how the acidity matched the freshness to give a clean, crisp mouthfeel.

Two red wines followed. The first, a Cabernet Franc-led Bordeaux style blend called DNA, was well matured having spent 23 months in new oak barrels. The feminine Cabernet Franc showed through with aromatic red mulberry, cherry and plum notes. I liked the dry moderate acidity but wanted more body on the palate. Last, was a single variety Cabernet Sauvignon, a 2011 vintage and the most expensive wine of the tasting. I rated it highest too. Red to dark fruit in flavour – ranging from red plum to loganberry through to blackberry – with hints of clove and spice, the complexity matched a robust structure on the palate with silky tannins to match.

The final wine of the tasting was the Straw Wine. This was a wine I had not tasted before so I was super excited. Straw wines are made using grapes that have been dried to concentrate their juices. Classically, it involves laying the clusters of grapes on straw mats in the sun. It is a technique that goes back to pre-Roman times and the wines are sweet to very sweet, with a long life. The Vergelegen Straw Wine is made from an equal measure of Sauvignon Blanc and Sémillon. The bunch stems are closed with pliers and then dried, not on straw but on palettes, and left in the sun for 2 weeks under netted protection. The wine was served in a small, sherry-type glass. It was a deep straw to pale yellow in colour. Perhaps better chilled, the aromas were a fruity mix of apricot, nectarine and raisin. These balanced with a delicious sweet, moderately syrupy texture in the mouth. This was my new favourite wine of the tasting and I bought a bottle.

There is no doubt that Vergelegen is one of the grand historic estates with both National Monument status and a pedigree of having won more than 200 awards since 2009, including (twice) the Chateau Pichon Longueville Trophy for the best red wine in the world. I would have explored further than the Tasting Room had I had the time but there is always another occasion. The wines were decent and well made but then at upwards of R230 to R310 a bottle so they should be. I would have hoped them to be exceptional at that price too. I sensed a premium pricing throughout my visit and not only the wines, offered in the smallest of tasting quantity. There was the R10 entry fee and I heard fellow guests talking about the cost of cellar and other tours. Neither of my tasting fees were waived on bottle purchase that usually occurs.

Nonetheless, I enjoyed my visit to Vergelegen and will do so again, most likely in the summer when I can see the gardens in their splendour. Who knows, I may even get to see the Straw Wine being made ….?