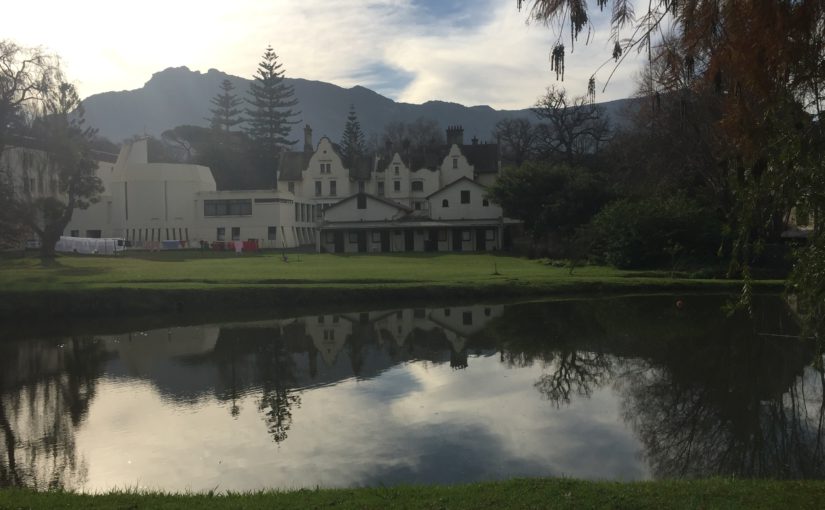 I have always wanted to bring my partner to High Constantia since I first visited in February. There are few wine farms or estates I have returned to yet, preferring to explore anew. There’s so much choice in the Western Cape. When I think of it, High Constantia is the first cellar I have returned to for tasting only (they don’t serve snacks but I was able to take my own). I have been back to 2 other vineyards – Waverley Hills and Oak Valley – but they were either for a meal or for a meal and tasting.

High Constantia is so easy to miss on the right hand side of the road leading to Groot Constantia. As I wrote before, whilst unassuming from the road, it has a delightful stoep overlooking a lake and old nunnery building at the rear. Entry is via the working cellar. The staff were labelling MCC and other wines as I arrived.

Sanneline greeted me again and looked after us well. I had tasted on reds before due to the time of year and so was excited to sample the MCC and Sauvignon Blanc. The MCC was worth waiting for and my favourite wine. Served at just the right temperature (as all the wines were for the tasting), the fine bubbles continuously rose from the medium gold wine in the glass. Apple fruity and orange blossom aromas melted into delicious dry, toasty apple flavours on the palate. This was an MCC to drink much more of and enjoy.

It was therefore an amazing confidence to be offered the wooded Cielo Nel Capo Reserve Sauvignon Blanc for the second tasting wine. The wine matures for 9 months in acacia and oak barrels. It was a typical watery green, straw colour in appearance, perhaps a little deeper than usual. I spent a while trying to describe the aromas and flavours. These were a combination of green melon, kiwi, and chalky citrus with a delicate wood flavour on the palate. There was a sweetness I had not tasted before that must have come from the acacia. I liked it and bought a bottle.

The final 2 wines were a treat to compare. The 2007 Sebastiaan Bordeaux Blend had since been released and there was stock remaining of the 2006 vintage. The wines differed primarily in the 20% of minority cultivars and, of course, year. I rated both equally but they were not the same. The 2006 wine had a more grippy tannin while the 2007 vintage was softer on the palate with warmer, fruitier, aromatic flavours. I was intrigued to read after that 2006 was characterised by fleshier, mild tannined reds. 2007 red wines are known for having more intense colour and fruit concentration.

High Constantia is well worth a visit. Sanneline is polite and knowledgeable and a good tasting host. There’s rarely more than half a dozen wines to taste, depending on time of year, and I paid extra (R70) for the MCC. It is rare too to be able to taste 2006, 2007 and 2008 vintages at a regular tasting too. One can therefore choose to make a brief tasting stop or to linger for longer. I highly recommend. Whichever you choose, you will not be disappointed.