Trading Wines in the City Bowl 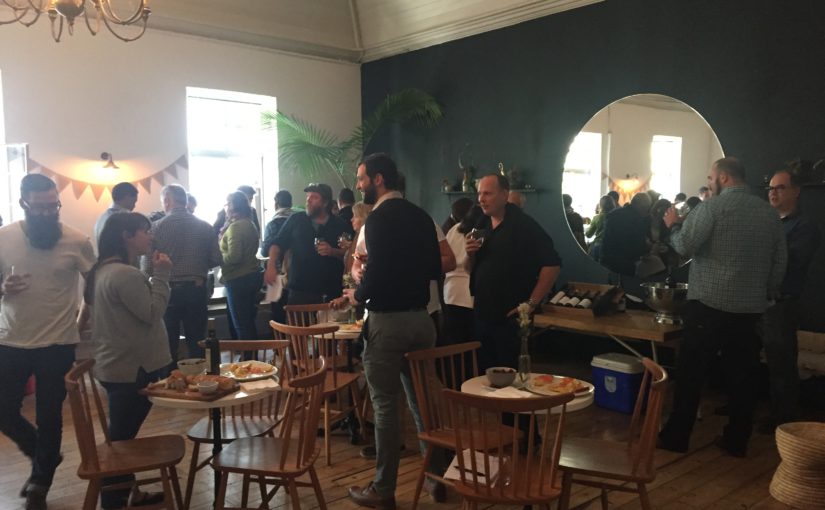 64a Wale Street, Cape Town was the address. 3pm was the time. Hidden behind the Honest Chocolate shop, through a very French-looking stone-walled courtyard, and up wooden stairs was The Gin Bar. This was where the Steele Wines Trade Show was being held. I was attending as the guest of a friend of mine from WinePairCT.

The event had a different vibe to any I have been to before. Unsurprisingly, perhaps, as I had not been to an afternoon trade show before. My fellow tasters were here for a purpose. Not for partying, not for wine tasting, but to explore and consider whether to buy. Salmon and olive snacks were there to balance my thirst also.

Ten farms were represented: Hartenberg, The Winery of Good Hope/Radford Dale, Crystallum, Alheit Vineyards, Cape Rock, Momento, Naudé/Adoro, Drappier Champagne, Le Mesnil Champagne and Gabriëlskloof. I knew and had tasted only of Gabriëlskloof and so was in for a treat. The producers came from far and wide too, from the Champagne region in France, Stellenbosch, Bot River, Hermanus, and the Olifants River. It is always a treat to taste from new vineyards. It is good too to sample rare and new varieties or blends also, such as Carignan, Cinsault and Portuguese blend wines. Prides (trade ones at that) varied widely.

I tasted too many wines to go into detail for each one. I shall pick out a few observations nonetheless. I didn’t rate the French Brut Rosé champagne highly. It was pretty and feminine, with good moussante bubbles, but rather bland. I realised just how good the South African MCC are and what great value for money they are too at half the price or less.

The white wines were all of a high standard. The lightly-oaked Hartenberg Chardonnay stood out for great stewed apple and caramel flavours, harmonious balance and creamy mouthfeel. Terroir-driven white wine specialists Alheit Vineyards from Hermanus showcased some wonderful wines. It is difficult to pick out a favourite but the Chenin Blanc-led Cartology was particularly good. I rated it the same as their Radio Lazarus Chenin Blanc but this was half the price and so greater value for money. The Sémillon added aromatic citrus, herbaceous structure and complexity to the fruity Chenin Blanc. With restrained acidity, this was wine that begged to be drunk more.

Grenache is fast becoming one of my favourite wines. It is more reliable than the comparable Pinot Noir that can unpredictably differ from enticing, warm to bitter, sour cherry flavours. The Cape Rock and Naudé offerings were similar in light- to medium-body, pale ruby to light purple colour in appearance. They both showed sweet cherry, red plum and maraschino flavours (Naudé with an underlying earthiness and light spice) as well as soft, balanced fruity tannins. I scored both the same even though the Cape Rock wine was 1/3 the trade price of the one from Naudé.

I haven’t tasted wines from Vredendal on the Oliphants River and so the Cape Rock wines interested. Their wines impressed, single variety Cinsault too, and this is one vineyard I shall look forwards to visiting. So too, the high-priced Hartenberg wines nearer to home from Bottelary Hills to the West of Stellenbosch. Higher price does not always guarantee higher quality but it did here. I rated The Stork (Shiraz) highest overall and my favourite wine. The Mackenzie Bordeaux Blend was not far behind. The Shiraz excelled across all areas: great in colour and appearance; harmoniously balanced fruit and spice aromas that filled the glass; smooth on the palate without losing any complexity and with an extended aftertaste.

This was a great event and with some great wines from lesser known and boutique vineyards. I would have had to make some difficult choices had I been a buyer.