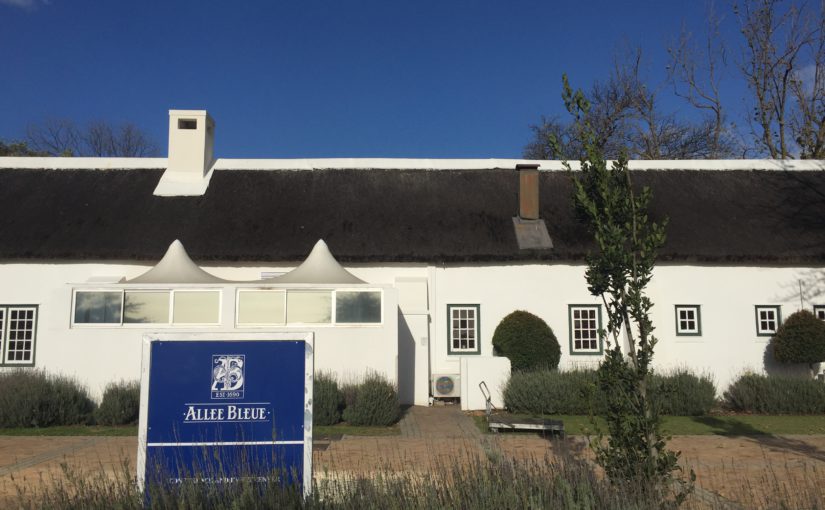 Allée Bleue was just a stones’ throw away from Solms-Delta and an obvious farm to visit for my last tasting of the day. It happened to be the day before the Boks played France in the final Test match of the Incoming Series. The avenue of blue gum trees – ‘Allée Bleue’ means ‘blue avenue’ or ‘blue drive’ – leading from the entrance gate was hugely impressive. The road snaked around winter vineyards with unforgettable views of the Drakenstein Mountains in the distance.

I made my way into one end of a low Cape Dutch building – fittingly white with azure blue sky above – to the Tasting Room, to be welcomed by the bubbly Deidré who was to be my tasting host for the afternoon (R30 for 4 wines). I was hungry and so ordered a meat and cheese platter (165) that was more than I could eat and better suited for 2 persons.

The wine farm is one of the oldest in the Franschhoek Valley – the year 1690 is heavily branded on the blue and white marketing material – and, since 1999, home to the art-loving German Dauphin family. Twenty-five of the 135 hectares of the property are under vine, though grapes are sourced from Walker Bay and elsewhere too. All the major white and red cultivars are grown. Sauvignon Blanc, Chenin Blanc and Chardonnay are the passion of winemaker Van Zyl du Toit who moved from Simonsig to Allée Bleue in 2009.

I began with the single variety Sauvignon Blanc (8% added Sémillon) and Chenin Blanc wines from the Premium Range. I rated them both much the same in quality and preferred the pleasantly drinkable (not too crisp) Sauvignon Blanc. The Isabeau blend, from the Ultra Premium Range, had similar easy drinking characteristics and a firm acidity. I liked the complex flavours of apple, apricot and light nectarine.

Cedar and blackcurrant Merlot showed through the cranberry and mulberry Cabernet Sauvignon aromas for the Cabernet Sauvignon/Merlot that followed. The wine was rounded on the palate, neatly balanced and with dry tannins. I much preferred the single variety Shiraz to its Flagship Pinotage cousin. Both wines had been matured for 14 months in mostly French oak but suffered from taut, dry tannins.

My favourite wine of all was the last one I tasted: the L’Amour Toujours, a classic Bordeaux blend less Malbec. I liked the dark berry and plum complexity on the nose due to the combination of the 4 cultivars. A 2013 vintage, the tannins that were coarse in some other wines – from 16 months in 60% new/40% old French oak – were more integrated and rounded.

Allée Bleue made for an interesting and enjoyable tasting. Most of the wines were pleasant enough but none really stood out. I was surprised that they were more New World style than Old World in character. Unusually, I didn’t buy a bottle. One reason was that the wines were about 40% more in price than I would have paid for the quality. I have tasted better for lower cost elsewhere – the Shiraz (R140), Pinotage (R185) and Bordeaux Blend (R200), for example. This may be a ‘Franschhoek effect’ but until I explore more wines in the area I won’t be able to tell. Meanwhile, let’s hope the Bok make a 3-0 series win over Les Bleus (they did!).