Home/Experience 4.0/Quality Abounds on the Mound at La Motte

Quality Abounds on the Mound at La Motte 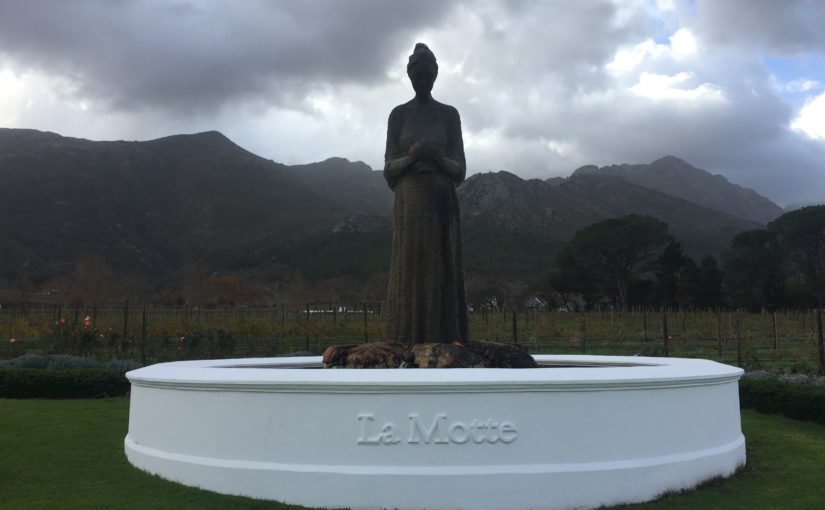 Franschhoek vineyards have long been under-represented in my tastings. I was very much reminded me of so as I passed signs to big named wineries such as Babylonstoren, Rupert and Rothschild, Vrede en Lust, Allée Bleue, Solms-Delta, Anthonij Rupert, La Chataigne and Le Manoir de Brendel en route to La Motte. It’s just happened that way and not because of any British mistrust of the French. Concentration on my home Constantia Valley area, the Elgin and Hemel-en-Aarde Valley wine estates for the Society tasting in May, and a trip to Wacky Wines Weekend in Robertson, hasn’t helped. My wine adventure today made up for a little of this shortfall.

I was at La Motte for the morning Shiraz Experience. I have written separately about this informative and fascinating specialist tasting by cellar-master Edmund Terblanche. I thought about returning to La Motte at a later date to visit more local vineyards today but decided against. It made more sense to complete my tasting of the range while at La Motte. After all, I had tasted some of their wines already.

Winter seemed a little deeper as I arrived. Grey clouds hung swollen in the sky as if aching to release their burden of moisture. The vines either side of the entrance road – flanked by grand arched white walls complete with classic lettering beneath a red shield – were struggling too, to hold onto their orange decaying leaves. I passed the imposing 4 metre high bronze sculpture, ‘The Wine Bearer’, made by Toby Megan from Knysna. Usually overflowing to symbolize abundance, the goblet was dry – a sign of the chronic water shortage in the Cape that the clouds were so willing to lessen.

The meaning of La Motte puzzled for some time and had occupied my mind as I drove from Cape Town. Many English words are derived from ancient or old French and I was sure of a translation if only I could think of one. The nearest I could think was of a medieval ‘motte-and-bailey’ castle that was introduced to England when the Normans invaded from France in 1066. A fortified castle tower was built on a raised earthwork mound or ‘motte’ that was surrounded by an enclosed courtyard (or bailey) and surrounded by a ditch and palisade. The ditch was frequently flooded, hence the origin of the word ‘moat’.

I parked beside trees and made my way to the entrance building. Several rows of sample cultivars – 16 varieties to be precise – distracted me, each with a handy descriptor sign. I had recently seen a similar exhibit at Bon Courage in Robertson and shall make a note to myself to visit next year just before harvest. The entrance building led though to an inner courtyard that enclosed the Farm Shop and the sumptuous Pierneef Restaurant – named after the celebrated South African artist Jacob Pierneef (1886-1957) renowned for his landscape paintings – that specialises in traditional Cape Wineland cuisine with a modern twist.

I didn’t visit either but made my way to the Tasting Room for the Shiraz event. The path led over a bridge over water to the elevated Cellar building. Originally, this would have been a drawbridge but this was fixed. My thesis was however right as the moat was crossed. I read after that the La Motte estate is thought to have been named after the French village of La Motte d’Aigues, in the Provence region in Southern France. Several Huguenots left the village for South Africa in 1688, some 60 years before Huguenot Gabriël du Toit planted the first 4,000 vines on the property.

The 170 hectare farm today has 75 hectares under vine, with 35 hectares of the remainder under conservation. Most of the major cultivars are grown on the Franschhoek estate (Merlot, Pinot Noir, Shiraz, Chardonnay, Sauvignon Blanc and Sémillon). La Motte is well known for sourcing grapes from affiliated family-owned farms in other climatic regions, mainly the Elim and Walker Walker Bay areas. It nonetheless surprised, given the reputation for high quality Shiraz and Shiraz blends, that 70% of wines produced were white.

The Tasting Room was decorated in classic, elegant and unfussy French style. Open, airy and well-lit, copy medieval tapestries hung from the walls. I half expected to see a replica part of the Bayeux tapestry depicting King Harold being killed and defeated by an arrow in his eye. The Room was flanked by the picture-postcard maturation Cellar. Wide-arched Baroque-style ceilings rose above symmetrical rows of barrels laid out to the nearest millimetre.

My sommelier was Wanneke – “Anneke with a W”, she explained as I tried to spell and write down. Here was the Afrikaans that gave Franschhoek its name as the ‘French Corner’. I had sampled the Brut MCC on my arrival for the Shiraz event which was just as well as it was not included on the tasting menu. Served at just the right temperature and in an elegant flute glass, it was both refreshing and elegant. Medium gold in colour, the fine bubbles gave classic mousse tingly mouthfeel with a shy but lingering taste of apple, citrus and pear.

La Motte wines are grouped in 4 ranges each containing a few products. I sampled from each: the easy-drinking La Motte Collection; the single variety Classic Collection; the limited supply premium Pierneef Collection; and the hand-harvested, exceptional quality Hanneli R (not for general tasting but included in the Shiraz Experience). I chose a Sauvignon Blanc from the entry and premium level collections to compare to start. I enjoyed both and scored the Pierneef wine a point above its junior La Motte cousin. The wines were a classic very pale watery straw in appearance, well-balanced and clean on the palate. The La Motte – from one of a staggering 700,000 bottles – had herbaceous, grassy, gooseberry and citrus flavours. By contrast, the flagship 10,000 bottle Pierneef showed greater complexity of flavour – less herbaceous but more warmer citrus, melon, light pineapple – together with a firmer follow-though and lingering finish. Costing R120 compared to R70 a bottle, the Pierneef offered great value for money for the quality.

The Classic Chardonnay was my favourite wine and I bought a bottle. It was one of the palest in appearance I have seen, with 11 months maturation in 2nd/3rd fill French oak barrels adding little to the very pale straw colour. It had superb complexity on both the nose and palate. Distinct stewed apple Chardonnay aromas were instantly recognisable, layered with light apricot, nectarine and caramel to lure the drinker. Warmer flavours – pineapple and peach – emerged in the mouth for a dry, lengthy finish.

Wanneke was keen I tasted the La Motte Millennium, a Merlot-led Bordeaux blend unusually without Cabernet Sauvignon. The aromatic cedar and red berry to cassis notes of the Merlot showed through to make for a very pleasant, drinkable wine with smooth, dry tannins. I also liked the more muscular but less complex Cabernet Sauvignon from the Classic Collection. It had a good mix of dark plum, mulberry and dark cherry flavours that made it fruitier than the Millennium. The tannins were smoother than I expected for the vintage (15 months in 1st/2nd fill oak) but the finish was a disappointing moderate in length.

I had tasted the Classic Syrah earlier during the Shiraz Experience. I include them here too for the completeness of this tasting review. It was all that I would expect of a Syrah, or rather Shiraz made in a Rhône style. The wine was restrained with delicate cassis, mulberry and white peppercorn flavours and a dry, meaty palate. I preferred the Syrah Viognier from the Pierneef Collection. The added Viognier (6%) amplified and brought out warmer and sweeter fruit and spice flavours, of violets too, that fed thought to a balanced palate.

The 2012 Hanneli R, a blend of Syrah, Grenache and Petit Syrah, and priced at a heady R1,100 a bottle has not been released for sale yet and was not for general tasting, The estate motto ‘A culture of excellence’ well suits the wine. Matured in new wood for 40 months and not released for at least 4 years after harvesting, the individual cultivar components perfectly balanced in complexity of flavour: dark spiced fruit from the Shiraz; lighter red berry and spice from the Grenache; high tannin and body from the Petit Syrah. The dry acidity, fruit and tannin harmoniously balanced for a smooth, lengthy palate.

A visit to the La Motte estate was long overdue and I was pleased to have had the excuse – the Shiraz Experience – to have put it right. I spent almost half a day here. I hadn’t even visited the 4 mid- to late-18th century Provincial (previously National) Monuments: the Manor House, the Jonkershuis, the Historic Cellar and the Water Mill. There’s much more besides, not only the Restaurant and Museum but Historic and Organic Walks together with a Hiking trail. These, together with the exemplar cultivar collection, give me excuse to return again within 6 months.

I came and enjoyed for the wines. I have commented previously how some of the historic, grand ‘vinotourism’ wineries lose their focus on the winemaking due to recreational or other activities. Meerendal, Constantia Uitsig and Avontuur come to mind, though Groot Constantia – despite the hordes of red bus tourists – surprised by the quality of the wines. La Motte fell into the latter category. The ‘culture of excellence’ indeed shone though the grey clouds above.