Home/Experience 4.5/A Myth, a Princess, History and Destruction, 2 Names and 4 Styles – Shiraz with Pizzazz

A Myth, a Princess, History and Destruction, 2 Names and 4 Styles – Shiraz with Pizzazz 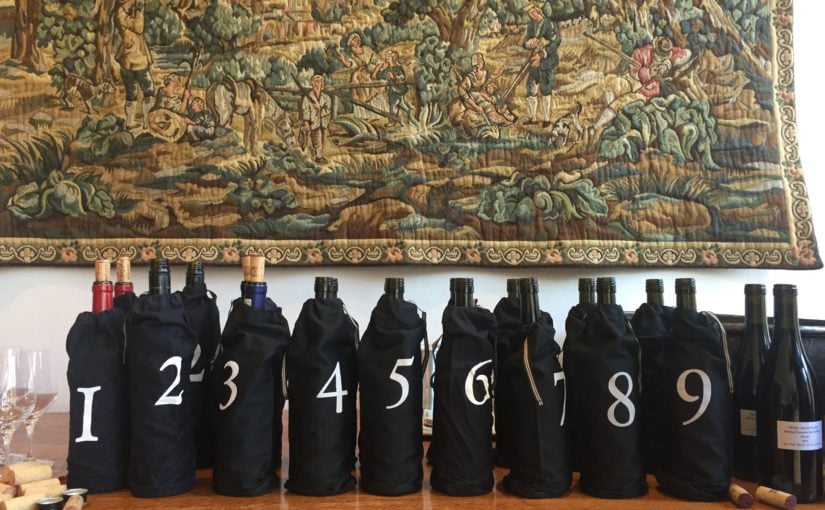 It is always a pleasure to taste a single cultivar wine from many winemakers on one occasion. I much enjoyed the Pinotage and Biltong Festival at L’Avenir Estate and the Cabernet Franc Carnival at Avontuur Estate. Today gave me the opportunity to sample Shiraz, one of my favourite wines, in a learned setting at the ‘culture of excellence’ at La Motte. I tasted their other wines afterwards and so shall write a more general account of the estate separately.

I felt very much the underdog in the hushed, elegant, wood-panelled tasting room. The welcome glass of Brut Vintage MCC on arrival was welcome and helped steady some nerves from my excitement. Edmund Terblanche, cellar-master since 2000, led the tasting. I sat amid other winemakers, industry experts, media and Cape Wine Masters.

Edmund began with a broad-ranging overview of the cultivar, its history, sales and styles. He fascinated but I was eager to have glass in hand. I knew, for example, that the romantic story that Shiraz originated in Persia (modern-day Iran) in the city of the same name, and capital of the Persian Empire, was a myth. The story began because signs of winemaking were found in ancient containers there that were some 6,000 years old. Much more recently, in 1998, DNA typing by the University of Davis, California, has proved that the grape originated in the Northern Rhône, France.

I knew too that Shiraz and Syrah were synonymous as both come from the same grape. New World, typically Australian but also South African, Shiraz is generally fruity, ripe and bold whereas Old World (French) Syrah is leaner, less bold and not so obviously fruity. When South African winemakers make Shiraz in a French character they will usually call it a Syrah. I didn’t know though that Shiraz means ‘princess’.

Shiraz comes in many styles and this, Edmund said, leads to a confusion that may reduce popularity of the grape. The wine can be sweet (candyfloss), fruity (dark berry), meaty (bacon rind, salami, ham) or spicy (peppercorn, cloves). Add to that the fact that some 20% of people cannot taste pepper and the confusion is entirely understandable.

The origins in South Africa are not entirely clear. Cuttings of the cultivar may have been left by Scotsman James Busby en route to Australia in 1838. First proof stems from Groot Constantia that records Australian cuttings planted here in 1896. A sweet wine was entered (though not labelled as Shiraz) into the Cape Young Wine Show, incidentally the oldest wine show in the world. The first definitive South African Shiraz wine was bottled by Hungarian Bernard Podlashuk, the founder of Bellingham Wines. Groot Constantia bottled their first Shiraz in 1963. Ten producers in 1968 became 50 producers in 1992 (La Motte since 1985). There are more than 560 brands today but, though popular, Shiraz doesn’t always sell well.

The wines were served ‘blind’ in flights of three. Edmund asked us to compare and consider from which country each were from. My lack of experience and the writing of detailed tasting notes meant that I had to work fast. Appearance did not give a clue to origin as they were similar deep ruby with a purple tint in colour. I picked out white peppercorn spiciness in all but from there the differences showed. The Crozes-Hermitage from France, most expensive and my least liked of the 3, brought cassis and leather notes with dryer tannin and less spice on the palate. The second wine was Australian, a bold fruity Patchwork Shiraz from the Barossa Valley, and one I recognised as I showcased it at the Society tasting evening of ‘Chardonnay and Shiraz’ in February. Edmund explained the more generous mintiness of Australian wines that comes from the blue gum trees.

Last up was familiar, a South African Shiraz from La Motte. Made in the Rhône style, hence called a Syrah, the grapes come from Franschhoek and the Walker Bay areas. It was my favourite wine of the flight and perhaps that was due to familiarity. I described the flavours in my notes as ‘cassis, mulberry and meaty’.

The 2nd flight set our next taste challenge. All 3 wines were 2017 bottle samples from La Motte. Colour, again, was similar though the 3rd wine was deeper in body than the first two. La Motte sources grapes from different areas, Edmund explained. I tasted lighter, sourer, less fruity spice on the nose and palate for the grapes from Elim. In Edmund’s words, the wine was “less rich in colour, more perfumy, and with finesse in freshness”.

Coffee, chocolate, rich blackberry and spice flavours, with higher tannin, made me think the last wine was from a warm region inland, perhaps the Robertson area. It foxed, as Edmund has warned beforehand as this was made in a more reductive style. The absence of air, or use of anti-oxidant sulphur dioxide, makes a wine in an unevolved and unoxidated state. This brings a tight and unyielding character. These grapes were sourced from Walker Bay, which too brings more tannin and structure.

Next up were another 3 wines and without a clue to their differences. The more experienced in the tasting were well ahead of me by now. Subtle differences emerged between the 2016 La Motte bottle samples. This was due to the type of oak maturation, all being in oak for 13 months, Edmund told us. The first wine was a shade paler and lighter than the other two, more aromatic but sour on the nose. This wine had been in old (2011) barrels for micro-oxidation.

The second wine was sweeter – I almost detected kerosene – from new French oak toasted in a Burgundy barrel. The final glass was definitely oakier than the others. This too had been in new French oak but in one that had been lightly toasted. By now, I was reaching my limit of new knowledge! It is ever a truism with wine that ‘the more you know, the less you know’. That’s what brings my passion and interest.

Edmund mixed up the last 4 wines. The first 3 wines were also from La Motte. I recorded the first as a classic, pleasant Shiraz. It was made using Franschhoek grapes with a 20% new oak maturation regime. I preferred the next wine, from the top-of-the-range premium Pierneef Collection. The cool climate Elim/Walker Bay Syrah had 6% added Viognier that, together with new/old oak maturation, brought a warmer, sweeter feel to the wine. I detected aromas of violet on the nose that reminded me of my tastings in the Elgin Valley and Hemel-en-Aarde Valley.

One of my favourites of the session was the Hanneli R. Made from only the best Shiraz grapes and blended with Grenache and Petit Syrah, this wine spends 40 months in mostly new oak (80%). Aromatic blackberry flavours matched soft, rounded tannins perfectly.

My tasting colleagues were excited by the final wine, one of the most expensive I have ever tasted, and sold for between R3,000 and R5,000 per bottle. This was the classy gold-labelled 2010 Côte Rôtie Shiraz from the very North of the Northern Rhône Valley. Wines from this region vie with the crus classés of Bordeaux for pure quality. It was time to give this heady-priced bottle my careful attention! I noticed a brown tinge to the purple red colour. The flavours were more gentle and delicate, whether warm cherry, mulberry or shy spice. I could taste the quality in the mouth, with classic aged French softness and roundness of tannins. 2010 was a good vintage too. It was most pleasant, as I tried hard to resist the spittoon, but I would have swapped it for 3 bottles of the Hanneli R.

This was an immense tasting for me and one that made me want to go to more winemaker specialist events like this one today. Edmund brought an infectious knowledge and passion to a very well organised tasting. Time flew by and I knew that I was stretched to the full. This was definitely Masters level against my Matric-level starting knowledge. That was to the good as I learned the most from the experience. It was great value for money too. I am sure that the R150 fee barely covered the tasting glass of the Côte Rôtie Syrah alone. Shiraz/Syrah certainly brings added spice and pizzazz to any tasting.