Home/Experience 4.0/In the Garage in the Heart of McGregor

In the Garage in the Heart of McGregor 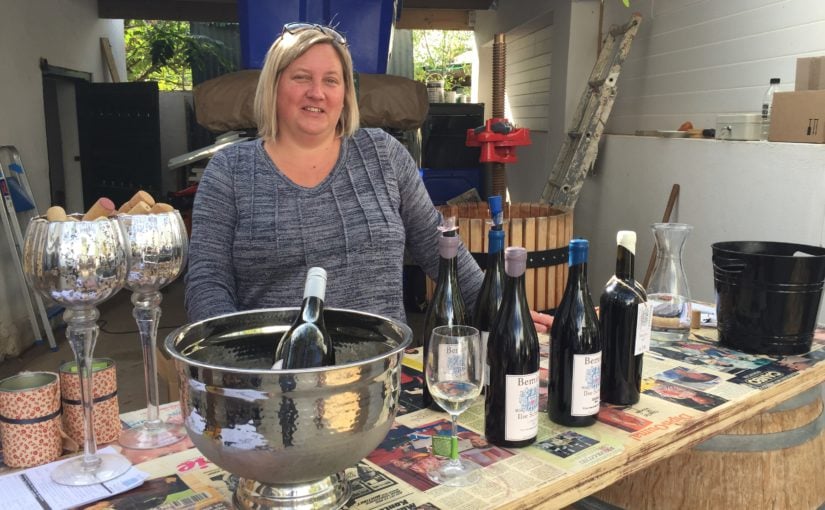 My Wacky Wine Weekend was coming to a close. Bemind Wyne in McGregor was en route to Cape Town from Lord’s Winery via Robertson. I was excited to visit as I had not been to a garagiste winemaker. Indeed, I had tasted but one garagiste wine before, an over-priced Cabernet Franc (R240) made by The Garageest at the Cabernet Franc Carnival at Avontuur Estate.

Bemind Wyne is the brainchild of Ilse Schutte. The name means ‘beloved wine’ and is reflected on the bottle label that shows her family crest with a heart superimposed on it. Her project is indeed a labour of love. Ilse is an experienced winemaker. She has worked for 16 years at vineyards in Franschhoek, Stellenbosch, Rawsonville and, recently, at Lord’s Winery. Her dream was to open her own wine cellar. She told me that she wanted to “start a family, work less and to be more creative” and so started her garagiste business in 2015. I am unsure, Ilse too, whether she is working any less.

Becoming a garagiste is certainly creative. Garagiste literally means ‘garage mechanic or garage owner’. The movement was begun in Bordeaux in 1991 by Jean-Luc Thunevin. He was a successful wine merchant in St Emilion, selling wine with grand labels from the surrounding vineyards. Jean-Luc founded Château Valandraud in an old garage in the back streets of St Emilion. The true garagiste, he said, is someone with “no money, no big vineyards. He has to do the best he can because he has to live off the sale of 3,000 bottles”. Five years later one of his wines was rated higher than the legendary Château Petrus. I can only imagine the shock waves that rebels such as Jean-Luc must have sent through traditional, highly structured French winemaking.

Garagiste winemaking started in South Africa just a few years later, a couple of years before Ilse began her wine career. Cathy Marshall started the Barefoot Wine Company in Muizenberg in 1995. Clive Torr set up Topaz Wines shortly afterwards, making Pinot Noir from just 400m2 of vines near Somerset West. Since then, the movement has considerably expanded. I heard recently that there are 34 garagistes in Durbanville Hills alone. A commercial garagiste, as opposed to a home winemaker, must: be the sole financier and winemaker; produce less than 9,000 litres per year; and be certified by SAWIS (the South Africa Wine Industry Information & Systems, who administers inter alia the Wine of Origin system).

Ilse produces 8,000 bottles a year, complete with wax cork covers like those at Arendsig Wines, and rather more than the 3,000 Jean-Luc had to live off. She told me that a true garagiste does not own a vineyard and buys the grapes from which to make their wine. Bemind Wyne is on Voortrekker Street, right on the main thoroughfare through McGregor Village. I didn’t ask Ilse if the property was a former garage but it certainly could have been.

I tasted 3 wines from the 4 offered for tasting (the MCC Brut was sold out). Sauvignon Blanc grapes are sourced from Bonnievale. The wine was very pale straw in colour with delicate green melon and gooseberry flavours. It was served too warm for my liking but I could taste a crisp acidity, albeit the finish was thin.

I much preferred the Shiraz, my favourite of the 3 wines, made with grapes from 10-year old vines from McGregor. Dark berry and currant flavours mixed with peppercorn spice to give much better complexity than the Sauvignon Blanc. Dry tannins, from 9 months in 2nd fill 225 litre French oak barrels, added structure on the palate.

The last wine was a Cinsault from the Breedekloof Valley between Rawsonville and Worcester. The heat-tolerant cultivar is not one I had tasted before. It is one parent of Pinotage (the other being Pinot Noir) and also originated from the Rhône region in France. I had tasted as a minor component in blends made by Ataraxia Wines (25%) and KVW (2%). The grape matches well with Grenache, Mourvèdre and Syrah and is blended in Châteauneuf-du-Pape, as well as the former French colony of Lebanon. The wine was light-bodied and pale ruby in colour, similar to Pinot Noir in appearance. It had sweeter red fruit aromas than a Pinot Noir – cherry, plum, maraschino, and raspberry – that soured to give dry, earthy flavours on the palate. I bought a bottle and shall look forwards to tasting again with more time to savour it.

Bemind Wyne was a new and interesting experience. It was fascinating to see the small scale production of a garagiste. It is always a treat too to meet the winemaker as well as to taste a new cultivar. Ilse certainly had her heart in the centre of McGregor village – and in more ways than one.